Despite its trainer origins, the single-engine twin-seat North American T-28 Trojan was successfully used as a combat platform for a time.

Authored By: Staff Writer | Last Edited: 11/02/2020 | Content ©www.MilitaryFactory.com | The following text is exclusive to this site. 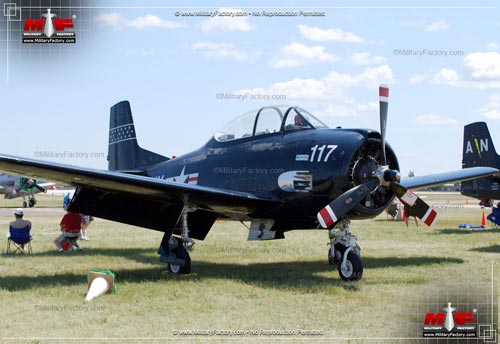 In the post-World War 2 world, North American Aviation drew up plans for a successor to its line of capable T-6 "Texan" twin-seat, single-engine basic trainers. The T-6, born in 1935, was built in nearly 15,500 examples and went on to serve a myriad of operators globally. The last of the lot was not retired until 1995 by the South African Air Force - such was its value. It was against this storied history that a new design was to emerge to take the place of one of America's most successful military trainer aircraft.

Immediately after the war, North American developed the "XSN2J-1" (company designation of "NA-142"), a prototype trainer platform which flew for the first time on February 10th, 1947. Two were built and intended for series use by the United States Navy. The twin-seat, single-engine design was powered by a Wright R-1820-78 "Cyclone" air-cooled radial piston engine of 1,100 horsepower driving a three-bladed propeller unit at the nose and was more or less of conventional design for the time.

The type was to be sued in the "scout-trainer" role and succeed an aging line of SNJ Texans then in service. However, the project was derailed by budgetary issues and cancelled outright in 1948.

From this existing framework, the beginnings of the T-28 "Trojan" were formed. North American developed the "XT-28" (company designation of "NA-159") and flew the monoplane on September 24th, 1949 for the first time, proving the new modified design sound. Two prototypes were completed and examples were delivered to Elgin Air Force Base during the middle of 1950 to be flight-tested under operational conditions by the 3020th Fighter Test Squadron. After this period, the design was formally approved and serial production ordered.

The aircraft continued North American's excellence in delivering capable military-level trainers. The design was of traditional arrangement, seating the engine in a tightly-fitted cowling ahead of the crew compartment. The cockpit involved a crew of two - student and instructor - seated in tandem under a lightly-framed canopy. The fuselage was well-rounded and streamlined, tapering at the tail at which point a single-finned, low-mounted horizontal plane arrangement was featured. The mainplanes were low-mounted along the fuselage sides, of straight design, and featuring clipped tips. A tricycle undercarriage, fully retractable, finished off the aircraft's list of physical qualities.

Operators of the T-28 ultimately ranged from Argentina and Bolivia to Uruguay and Zaire. Beyond their given training roles, the series was also pressed into service as a ground-attack platform, primarily during the Vietnam War (1955-1975) by most of the major players there. The French used a stock in the Close-Air Support (CAS) role during actions over Algeria. The T-28 also in played a role with government forces of the Philippines during the rebel-led 1989 coup attempt.

Initial operational versions were the "T-28A", these going to the USAF and powered by the Wright R-1300-7 engine (driving a two-bladed propeller unit) with 1,194 examples built to the standard. The "T-28B" followed as a US Navy-centric variant carrying a Wright R-1820-86A/86B engine of 1,425 horsepower with included changes being a ventral air brake and three-bladed propeller unit. Total production reached 489 examples for the service. The T-28C became another USN version, this given an arrestor hook as well as reduced-length propeller blades.©MilitaryFactory.com
Advertisements

The T-28D "Nomad" were USN T-28B models converted for the COunter-INsurgency (COIN) role for the USAF during the Vietnam War. Various engine fits became available and broader support for air-to-ground weapons was instituted. Some 321 were converted to this standard by Pac-Aero. Another CAS attack-minded for became the "AT-28D" produced by Fairchild, again for service in Vietnam. Six underwing hardpoints were added as well as an ejection seat. Total conversions amounted to seventy-two airframes.

North American converted the T-28D into a COIN model by way of the "YAT-28E" prototype. This entry included a Lycoming YT-55L-9 turboprop engine, twelve underwing hardpoints, and 2 x 12.7mm Heavy Machine Guns (HMGs) in fixed, forward-firing mounts as standard features. Three prototypes were built to the standard with a first flight recorded in February of 1963. However, the model was not adopted and work on the design ended in 1965.

The French Air Force took on a stock of ex-USAF T-28A models as the T-28S/T-28F "Fennec". These were modified in 1959 with cockpit armoring, power-assisted canopy, four underwing hardpoints (for gun pods, rockets, and bombs), and a Wright R-1820-97 supercharged engine of 1,200 horsepower for their new owners and flown as COIN platforms into 1962. These were then later sold off to the Argentine Navy for carrier service as the "T-28P".

The T-28R "Nomair" was a modified, reduced-performance version for civilian flying. The design emerged from a stock of expiring T-28A models from the USAF and carried Wright "Cyclone" R-1820-80 engines and wider wingspans to achieve certification - which was granted in February of 1962.

Its militarized training form was built as the T-28R1 "Nomair I" and featured seating for two in tandem as well as redudant control schemes at both cockpit placements for student and instructor. The Brazilian Navy took on a stock of six aircraft in 1962 and, as such, had to have arrestor hooks installed for shipborne work. These later fell to the Brazilian Air Force before their time in the air ended.

The T-28R-2 "Nomair II" was an interesting conversion model for civilian market use - the fuselage was reworked to a five seat cabin. At least ten airframes were completed.

The "RT-28" became a photo-reconnaissance conversion model for COIN work by the Royal Lao Air Force during the Vietnam War. One T-28 example of the service is known to have defected to North Vietnam and was reused by its new host country - becoming the first fighter of the North Vietnamese Air Force inventory. During the conflict, the Republic of Vietnam Air Force also operated the series as a CAS platform while the USAF claimed a loss of twenty-three T-28s of their own in the war.

Total T-28 production reached 1,948 units and the line was eventually superseded by the turbo-prop powered Beechcraft T-34 "Mentor" in same role (this aircraft detailed elsewhere on this site). These were introduced in 1953 and produced through over 2,300 examples.


The T-28 also went on to form the basis for the Taiwanese "T-CH-1" by AIDC detailed elsewhere on this site. Fifty-two of these were built for the Republic of China Air Force for the trainer role after a first-flight in November of 1973.©MilitaryFactory.com
Note: The above text is EXCLUSIVE to the site www.MilitaryFactory.com. It is the product of many hours of research and work made possible with the help of contributors, veterans, insiders, and topic specialists. If you happen upon this text anywhere else on the internet or in print, please let us know at MilitaryFactory AT gmail DOT com so that we may take appropriate action against the offender / offending site and continue to protect this original work.
Advertisements

(Showcased performance specifications pertain to the North American T-28D Trojan production variant. Performance specifications showcased above are subject to environmental factors as well as aircraft configuration. Estimates are made when Real Data not available. Compare this aircraft entry against any other in our database or View aircraft by powerplant type)
OPTIONAL:
Conventional bombs, rockets, machine gun pods (7.62mm or 12.7mm calibers), 20mm cannon pods or napalm as required across two or six underwing pylons. 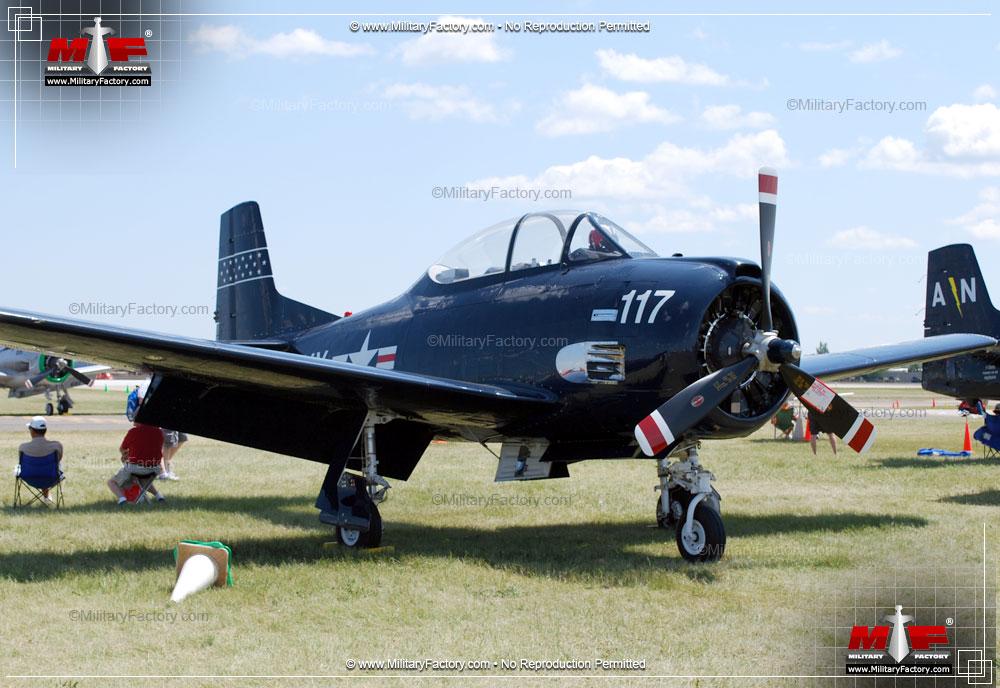 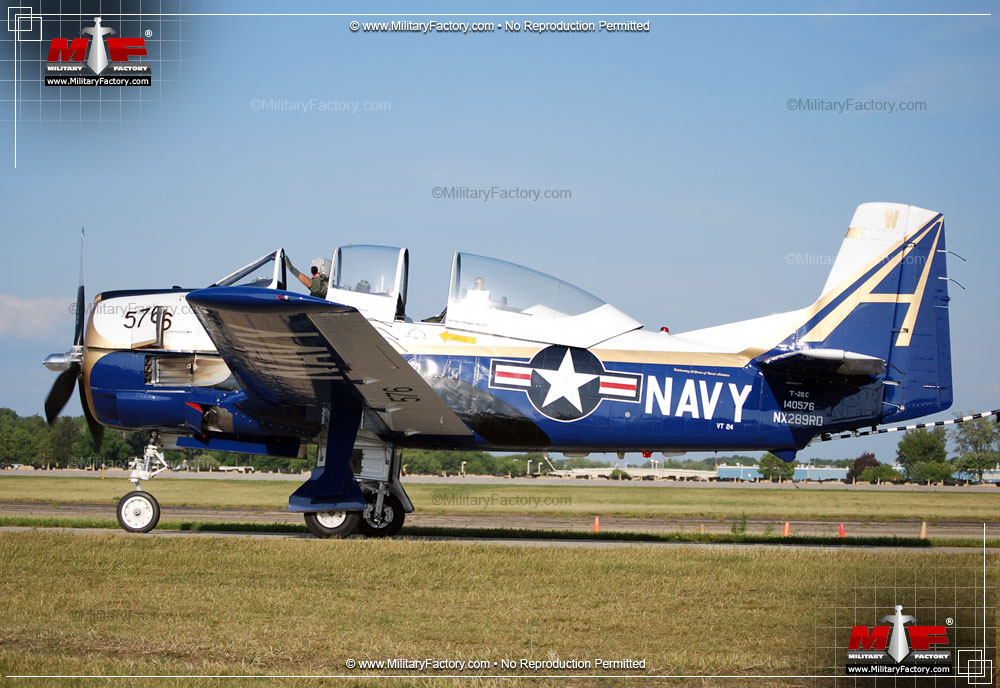 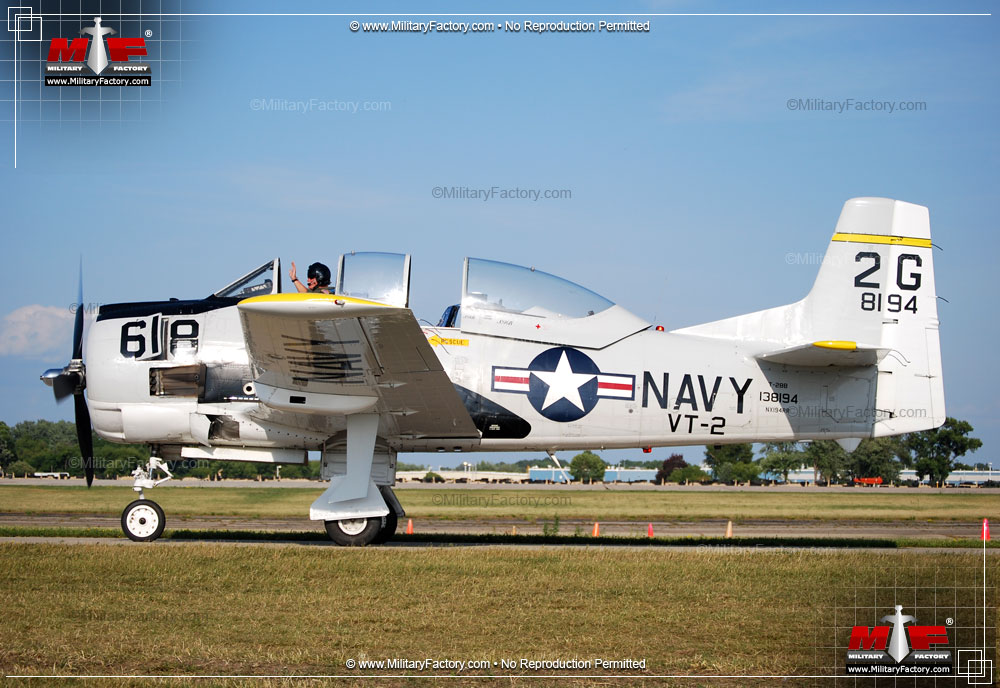 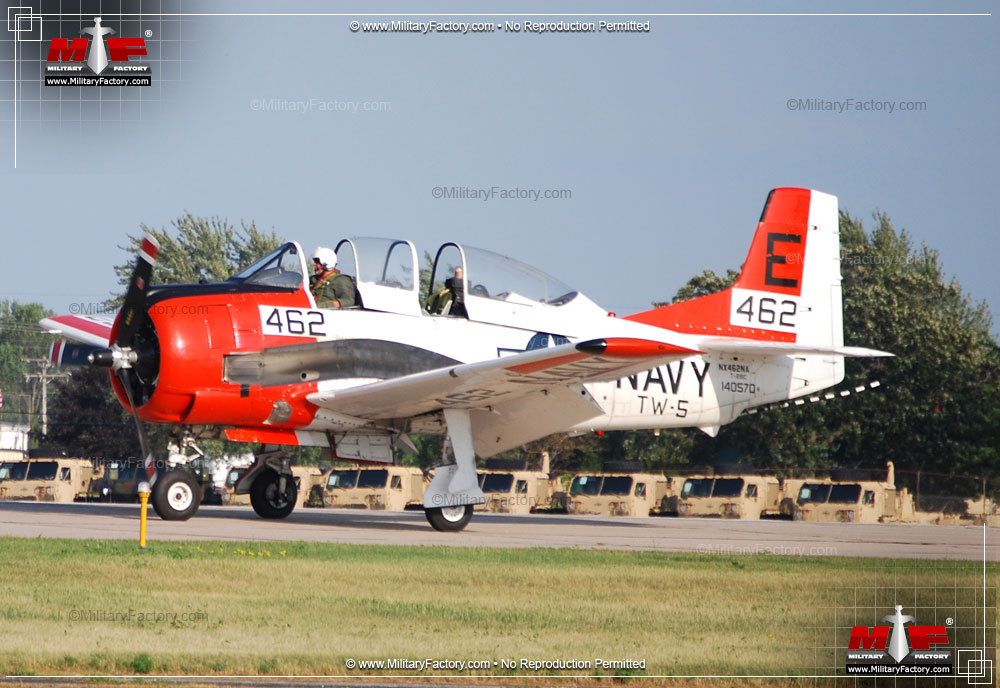 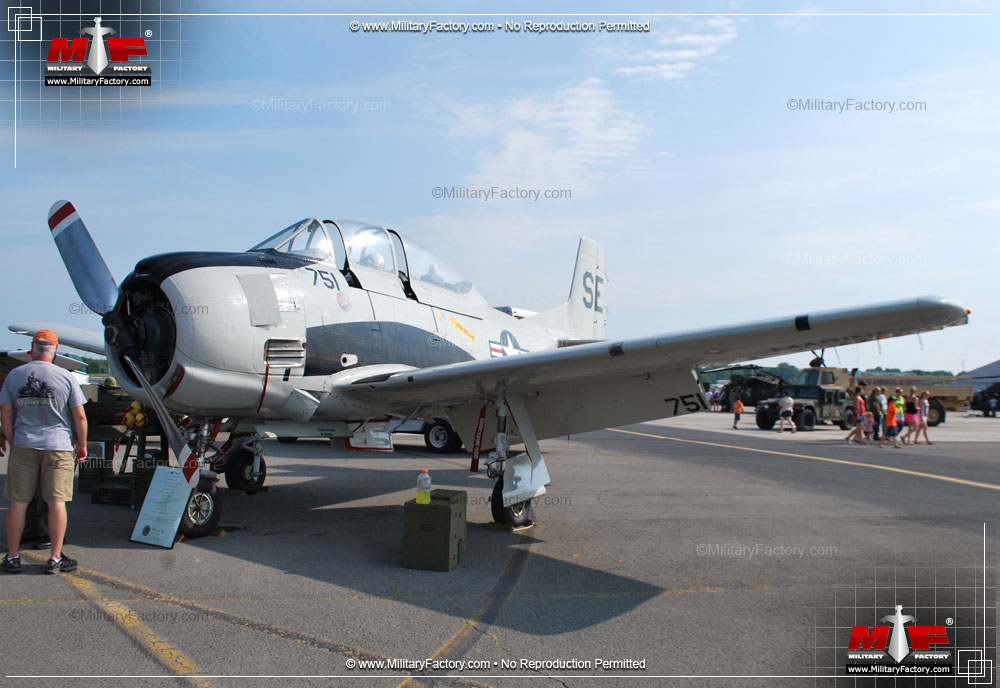 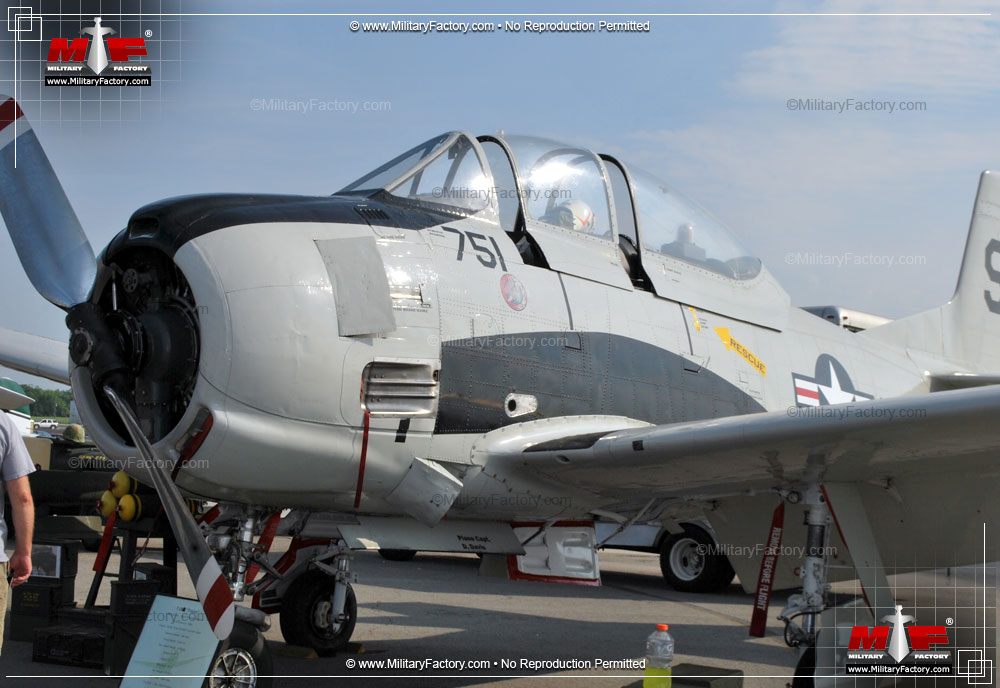 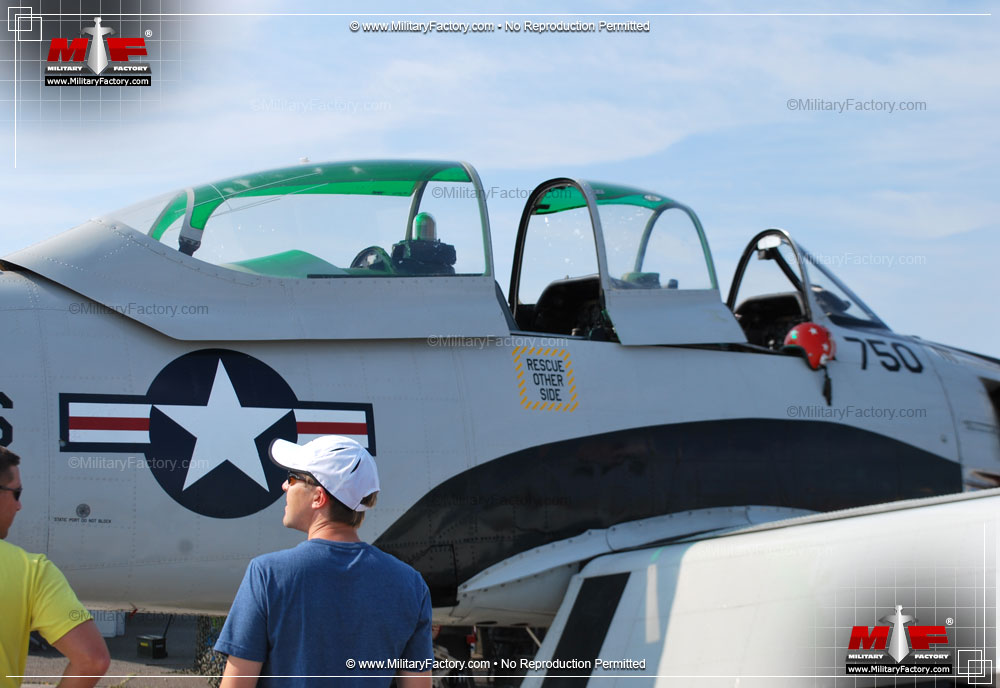 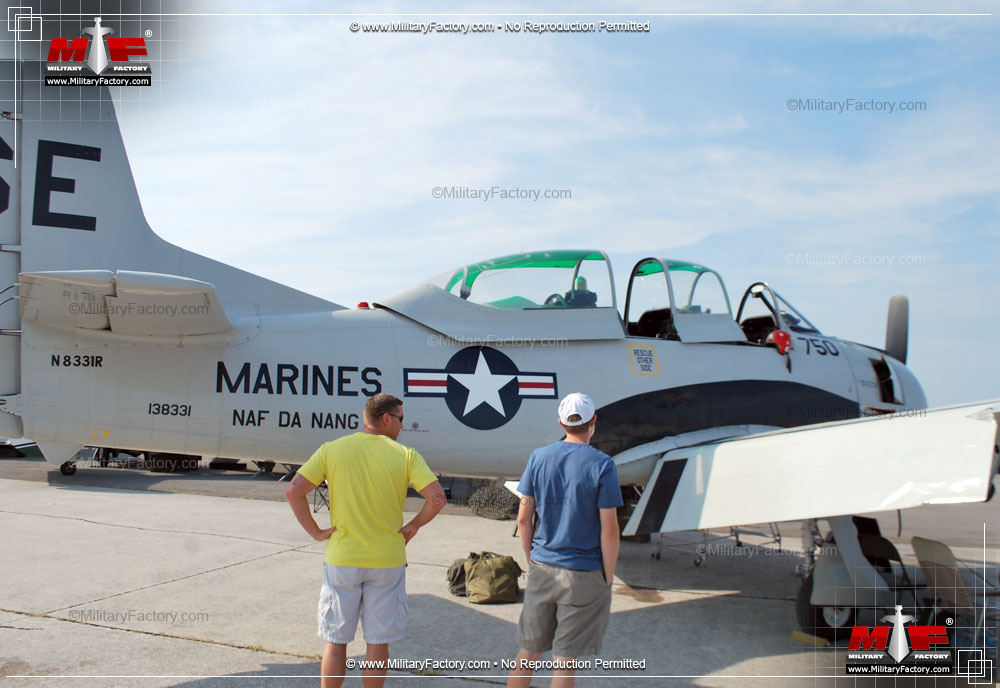 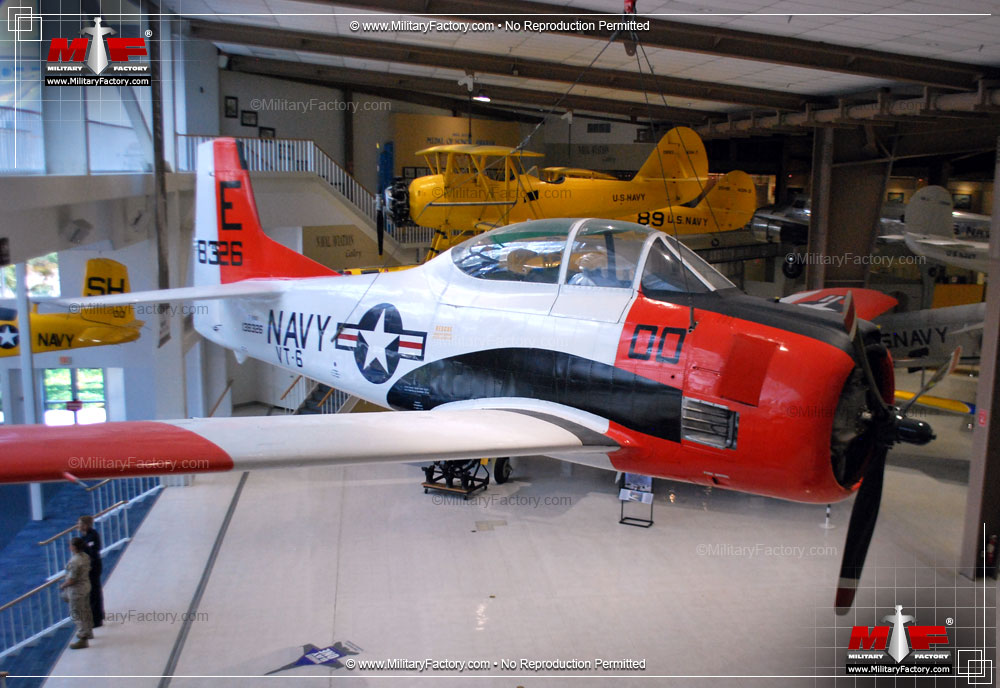 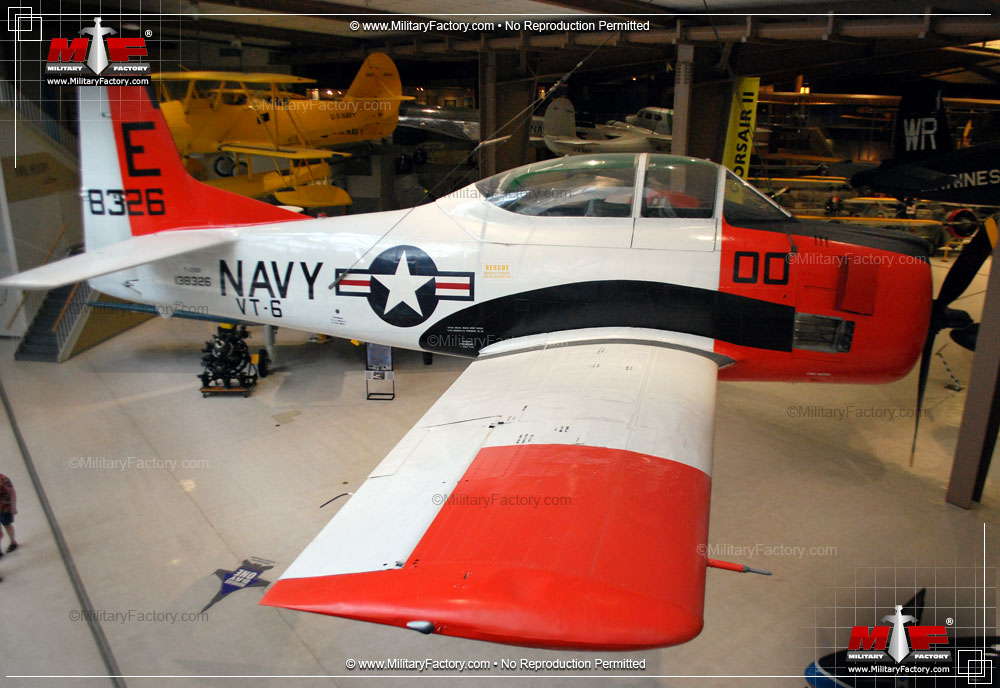 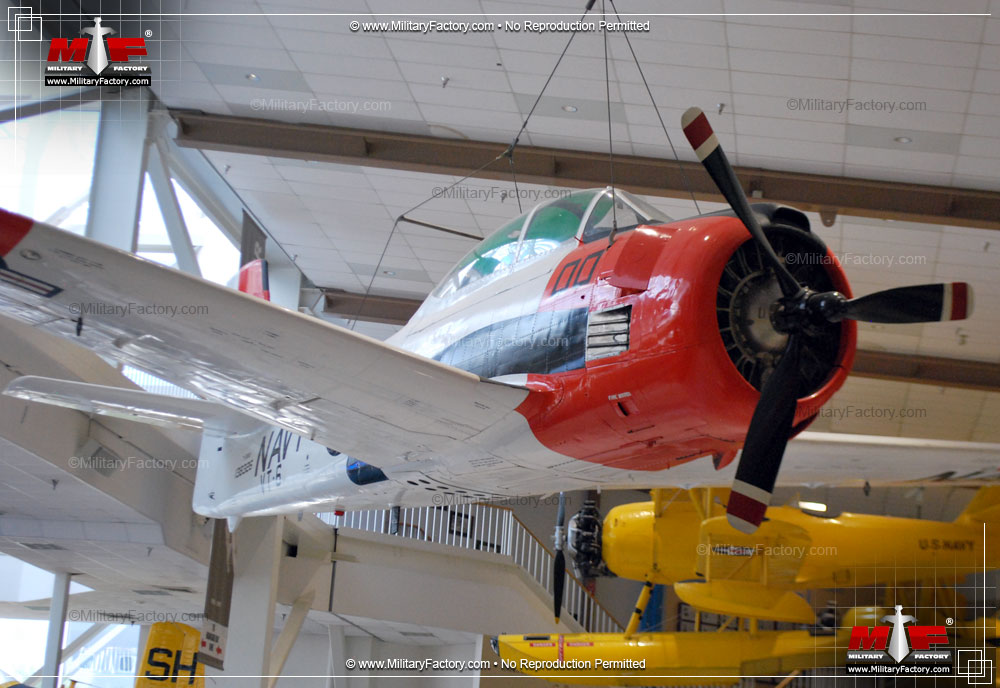 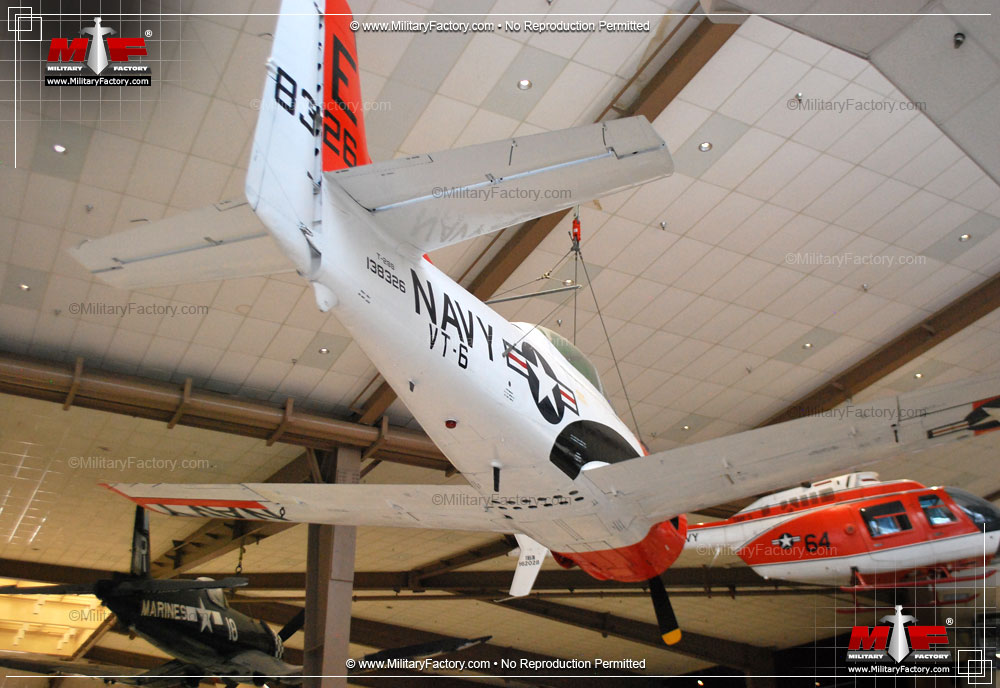 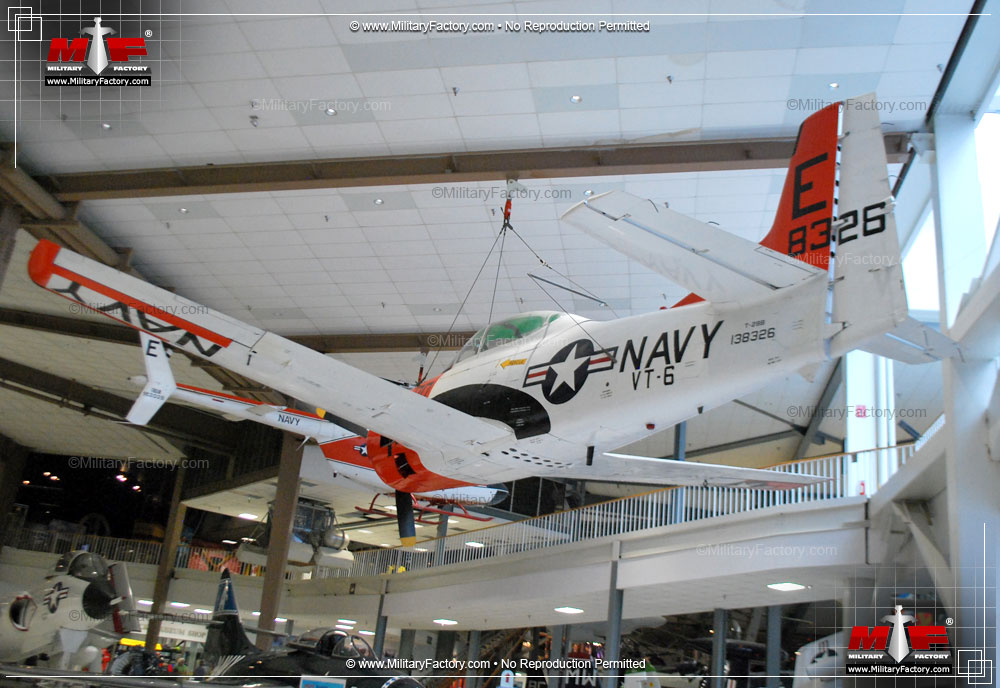 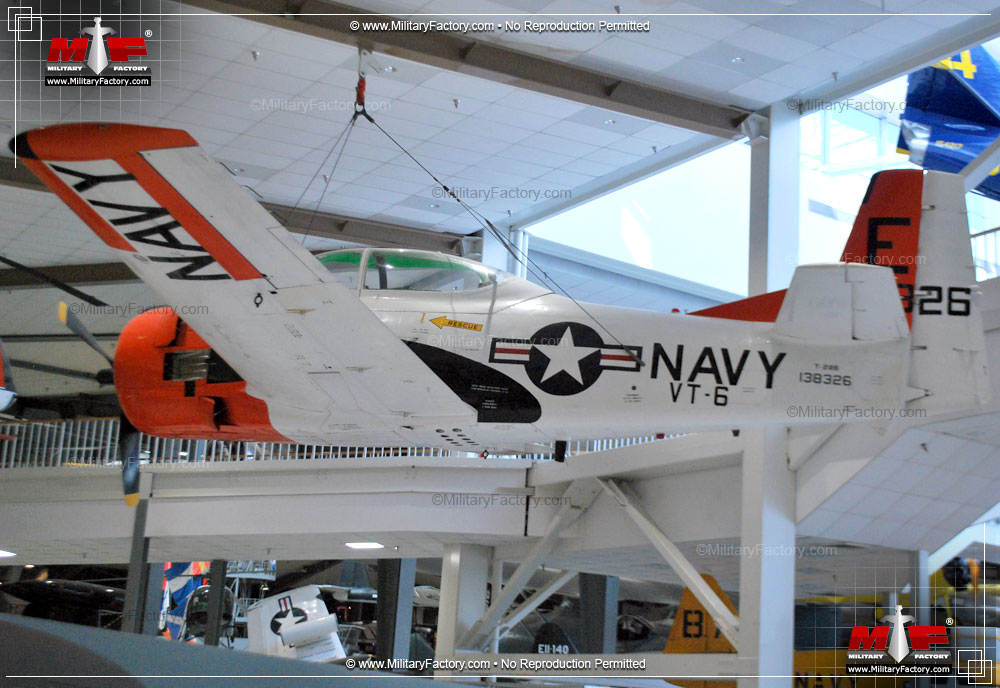 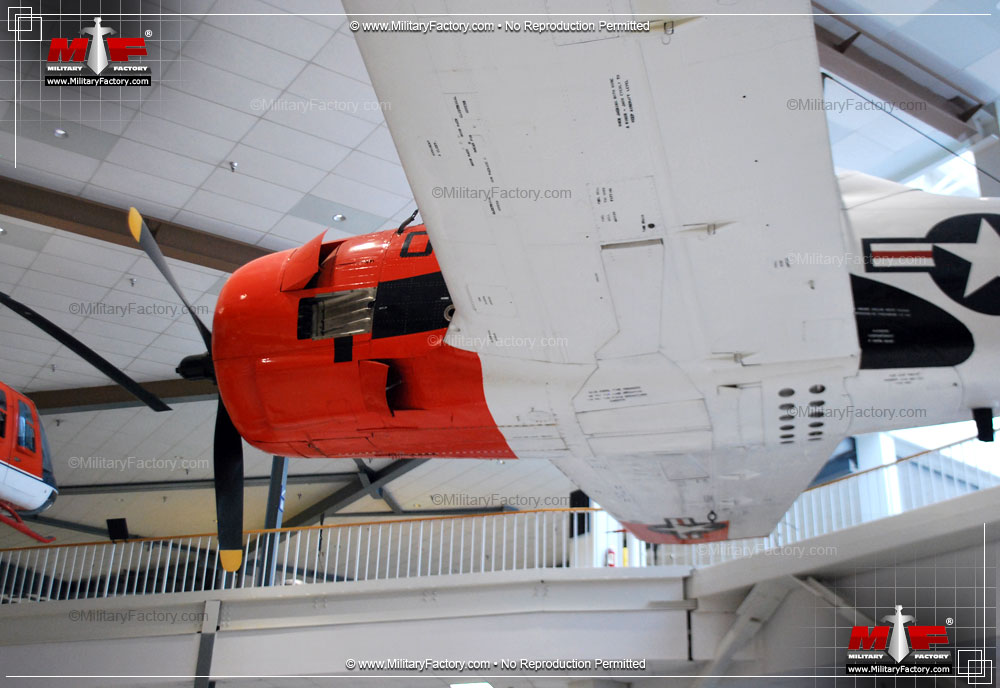 Aviation developments of similar form and function, or related to, the North American T-28 Trojan...