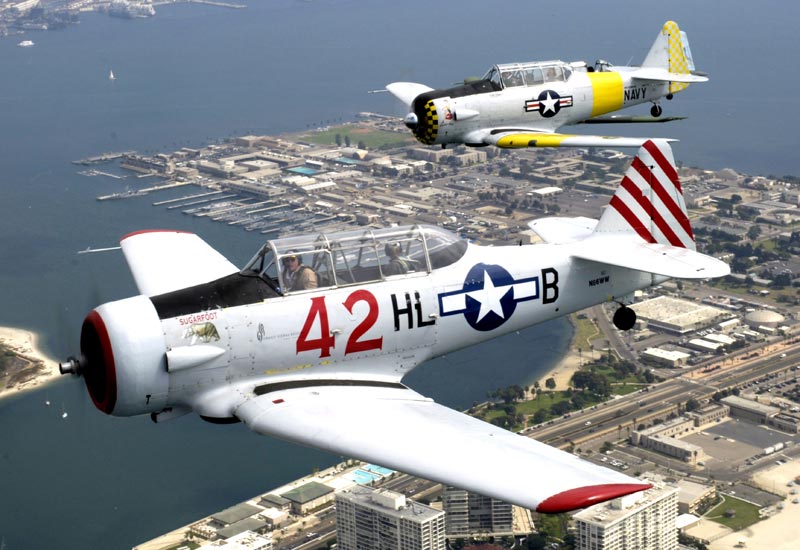 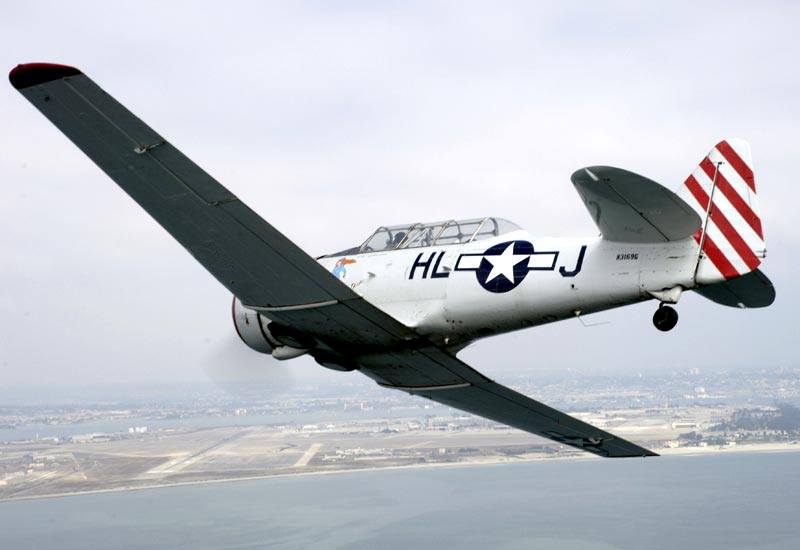 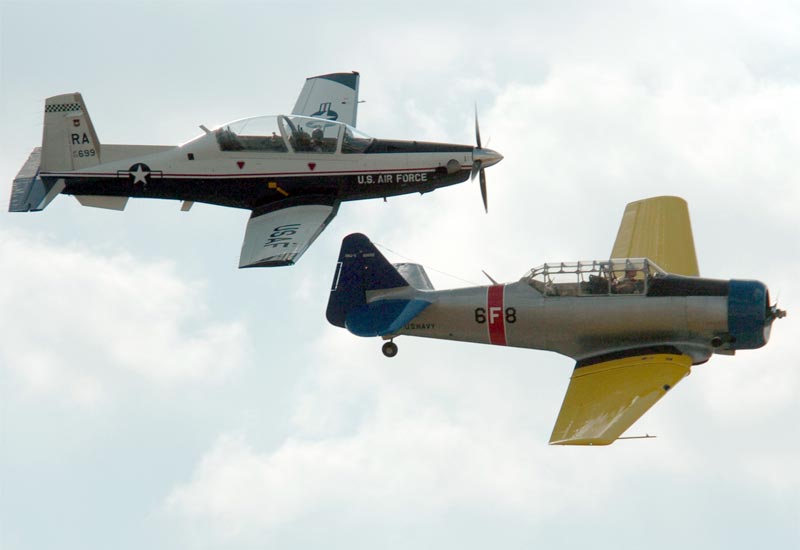 The Texan series saw production numbers surpass nearly 16,000 by the end of its run.

The T-6 Texan was and is a world famous single-engine aircraft primarily known for its use as a trainer. A product of the North American Aviation Company, the T-6 Texan appeared during the years spanning World War 2, survived the Korean conflict, served for a time during the Vietnam War and is still in some operational service to this day. The sheer longevity of the system have made her a popular aircraft at air displays and with airplane aficionados the world over. First flight was attained on April 1st, 1935.

The T-6 Texan first appeared as the NA-16 in prototype form. The NA-16 was a conventional low-wing monoplane system of all metal design and open cockpits. The undercarriage was fixed and power was a single Wright-brand R-975 series radial piston engine of 400 horsepower. With a few modifications including a glazed cockpit canopy, the aircraft (designated by North American as the NA-18) was accepted by the United States Army Air Corps (USAAC - the forerunner to the modern day Air Force) into their "Basic Combat" aircraft competition with the T-6 was now designated by North American as the NA-26, a further developed version of the modified core aircraft now sporting a more powerful Pratt & Whitney R-1340 radial piston engine of 600 horsepower, updated cockpit equipment and retractable landing gear (including the tail wheel). The type went into production as the AT-6 Texan (though for a time known as the BC-1) and SNJ. The aircraft was also received by several export customers including the RAF and Commonwealth allies (as the "Harvard I") and Canada (as the "Yale").

Throughout her production life, the AT-6 differed in roles, powerplants and on basic internal improvements as needed. For instance, the AT-6C and D models were known to have a completely redesign internal structure to compensate for the need specialized metals elsewhere in the American war effort. Role-specific models included a gunnery trainer platform and a multi-role performer. The T-6G appeared in a post-war form and featured an all new powerplant, revised cockpit layout and positional tail wheel for improved ground-handling characteristics.
Advertisements

In her basic design, the AT-6 sported a two-seat glazed canopy cockpit with student and instructor seated in tandem. The engine was mounted at extreme forward of the design with the cantilever wings low-mounted just under the forward area of the cockpit. The empennage ended in a single vertical tail surface. The view forward was acceptable but not wholly ideal though the all-around vision was more than adequate. As a design primarily utilized for training, the aircraft was more than up to the task, providing operational speeds of over 200 miles per hour and a ceiling of over 20,000 feet with a 750 mile range.

During World War 2, the AT-6 was used extensively by military branches around the world as a primary fighter trainer training thousands of pilots in the nuances of fighter tactics and general flight. Armament was optional, as flight training was the primary focus, but could consist of two forward-fixed 7.62mm machine guns. The Texan survived to take part in the Korean and Vietnam conflicts - revised and in specialized forms - serving as Forward Air Control (FAC) systems supporting land forces in action.

The T-6 still maintains an aerial profile to some extent in today's skies as a fixture of collectors, warbird enthusiasts and air shows alike. Her resilient construction, favorable flight characteristics and fabled history have ensured her future success for the time being. Many an Allied pilot in the Second World War can attribute their education in flight to the development of this fine machine.