The Beechcraft T-34 Mentor was developed from the Beechcraft Bonanza and produced in some 2,300 examples from 1953 through 1959.

Authored By: Dan Alex | Last Edited: 12/06/2021 | Content ©www.MilitaryFactory.com | The following text is exclusive to this site. 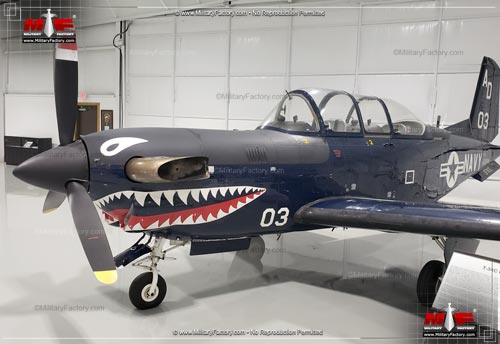 The T-34 Mentor series served the United States Air Force and United States Navy well in training generations of aviators in the years following the close of World War 2. She led a productive service life in the inventories of several other foreign operators as well and has since become a favorite of civilian demonstration teams at air shows across the country. The basic T-34A (USAF) and T-34B (USN) models were bettered in the turbo-prop powered T-34C and a jet-powered version was even proposed, though the latter to no avail. While still in active service globally, the T-34's days in American military service are numbered as a viable replacement (the "Texan II") has appeared in number.

T-34 origins place her as a private venture undertaken by American aviator Walter Beech of Beechcraft Aircraft Company. Walter Beech earned his stripes as a fighting airman in World War 1. The Beechcraft company was started in 1932 by Walter and his wife, Olive Ann Beech. After several victories in commercial races with Beechcraft planes, the company's attention turned to the production contract windfall known as World War 2. During the whole of the conflict, the firm was responsible for the production of some 7,400 aircraft for the American war effort. Bombers and navigators mostly trained on the Twin Beech AT-7/C-45 "Expeditor" (Beechcraft Model 18) series.

The T-34 design itself was developed from the single-engine, piston-powered Beechcraft Model 35 "Bonanza" and designed under the project name of "Beechcraft Model 45". Up to this time, the American armed forces were doing their aerial training using the 1930's-era North American Aviation T-6 Texan, this aircraft powered by a single radial piston engine with seating for two and sporting low-set monoplane wings. The T-6 went on to be produced in 15,495 examples and benefitted commercially from the environment of a wartime America. Beech sought to market his proposed Model 45 design as a budget alternative to the aging T-6.

The Model 45 was produced from three initial proposed airframe designs. One such design was fitted with the Beech-style "Vee" vertical tail fins common to the brand. The four-seat cabin of the original Bonanza allowed for a large two-seat cockpit to be introduced. These three designs eventually evolved to become a conventional arrangement of engine, wings and a centrally-placed cockpit to better help its marketing to American military brass. The understructure was further strengthened over that of the original Bonanza to contend with the rigors of military fighter training. A single prototype example was constructed and furthered in three Model A45T forms. The initial two units were fitted with a Continental E-185 engine of 185 horsepower output while the third prototype was given a Continental E-225 series engine. First flight was achieved on December 2nd, 1948. By 1950, the USAF had placed an order for three Model A45T evaluation aircraft under the new designation of YT-34.

The design was accepted by the United States military and introduced in 1953. The first operator became the United States Air Force receiving the T-34A model. The United States Navy became the next operator in 1955 and accepted the slightly-modified T-34B into service. The T-34B was also license-built in Canada as the "B45" trainer. Other producers eventually became Fuji Heavy Industries of Japan and FMA of Argentina. Production of T-34A models finished in 1956 and was followed by T-34B production commencement in 1957. The final B45 rolled off the assembly lines in 1959.

Design of the T-34 was wholly conventional. The engine was mounted to the extreme front of the fuselage, followed by the tandem-seat cockpit. The student pilot and instructor sat under a bubble canopy offering up excellent visibility in all quadrants. Wings were low-mounted monoplanes and unswept, clipped at the tips, and fitted just under the cockpit and sported some dihedral (upwards angle). The tail was equally conventional and made up of a single vertical tail fin with little to no sweep. The tail fin was complimented by a pair of horizontal planes. The aircraft sat on a tricycle undercarriage with two single-wheeled main landing gear legs retracting under each wing and a single-wheeled nose landing gear leg retracting rearwards under the engine compartment.

The T-34 was produced in a handful of variants beginning with the three YT-34 prototypes. These evolved into the T-34A for the US Air Force to which some 450 examples were ultimately delivered. T-34A's in USAF service were replaced by the Cessna T-37 series trainers.

The T-34B was delivered to the United States Navy in 423 production examples. T-34B models differed slightly from their USAF counterparts to better reflect their navalized direction. The steering nosewheel was replaced by differential braking and her wings were given more dihedral. Adjustable rudder pedals replace the adjustable seats of the USAF model. These were ultimately replaced by the T-34C improved trainer models.

The T-34C was developed from a pair of YT-34C trainers which, themselves, were T-34B production models handed over to Beechcraft by the USN for conversion development in 1973. The new systems were fitted with turboprop powerplants (hence becoming YT-34Cs) and eventually graduated to become the T-34C "Turbo-Mentor" production models. First flight was achieved on September 21st, 1973. The acceptance of the T-34C into service meant that the Mentor production lines would be reopened after a 15-year drought. Production began in 1975 and an armed export version (T-34C-1) was unveiled in 1977. Production of all C-models completed in 1990. The T-34C "Turbo Mentor" could easily be differentiated from the previous T-34 forms by her lengthened nose and exhaust stacks protruding from either side of the engine, just behind the propeller.

The T-34C "Turbo-Mentor" model was powered by a single Pratt & Whitney Canada PT6A-25 turboprop engine delivering 715 shaft horsepower (derated to 400shp). Top speed was limited to 322 miles per hour while cruise was about 246 miles per hour. The aircraft's stall speed was listed at 61 miles per hour (this with the engine off and flaps extended). Range was 814 miles while the aircraft maintained a service ceiling of 30,000 feet with a rate-of-climb equal to 1,480 feet per minute. Total g-limit on the airframe was 6+/-3. "Turbo-Mentor" 34C is the civilian C-model version. The T-34C-1 was another C-model derivative. This particular form was fitted with four underwing hardpoints for the use of ordnance training or light attack functionality, primarily for export.

The Model 73 "Jet Mentor" was a proposed jet-powered trainer version of the prop T-34. In 1955, Beechcraft took to modifying the base design as a private venture . A single jet engine was set in the rear fuselage and aspirated by twin intakes fitted to the wingroots. The cockpit was set further forward in the fuselage and was redesigned to make it an applicable jet-friendly cockpit. First flight occurred on December 18th, 1955 and evaluation of the jet-powered system by the USAF followed. The USAF declined to order the Jet Mentor and instead focused their attention on the Cessna T-37 "Tweet" series. Likewise, the USN showed some interest in the Model 73 but elected to stick to the jet-powered Temco Aircraft TT "Pinto".

Despite her 1950's origins, the T-34 is still used to train USN and USMC aviators. As of this writing, her numbers are dwindling by the year as her replacement - ironically the Beechcraft/Raytheon T-6 "Texan II" - appears ready to take the mantle. Of note is the US Army's use of some six ex-USN T-34C models used as chase planes. Civilian demonstration teams have put the T-34 airframe to good use as well.

The Argentine Navy utilized their light attack T-34s in the Falklands War against the United Kingdom.
Advertisements

RUGGED AIRFRAME Inherent ability of airframe to take considerable damage.
MARITIME OPERATION Ability to operate over ocean in addition to surviving the special rigors of the maritime environment.
BAILOUT PROCESS Manual process of allowing its pilot and / or crew to exit in the event of an airborne emergency.
CREW-MANAGED Beyond a pilot, the aircraft takes advantage of additional crew specialized in specific functions aboard the aircraft.
ENCLOSED CREWSPACE(S) Features partially- or wholly-enclosed crew workspaces.
RETRACTABLE UNDERCARRIAGE Features retracting / retractable undercarriage to preserve aerodynamic efficiency.

(Showcased performance specifications pertain to the Beechcraft T-34C production variant. Compare this aircraft entry against any other in our database or View aircraft by powerplant type)
OPTIONAL:
Up to 1,200 lb of stores carried across four underwing hardpoints in the light attack role.


(Not all ordnance types may be represented in the showcase above)
Hardpoint Mountings: 4
Mounting Points 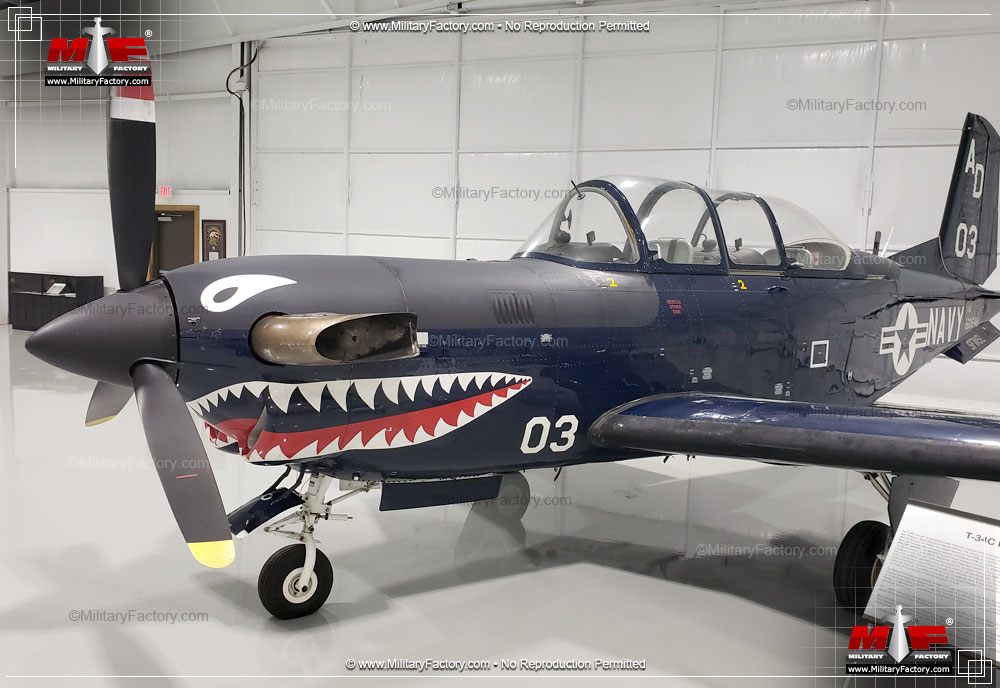 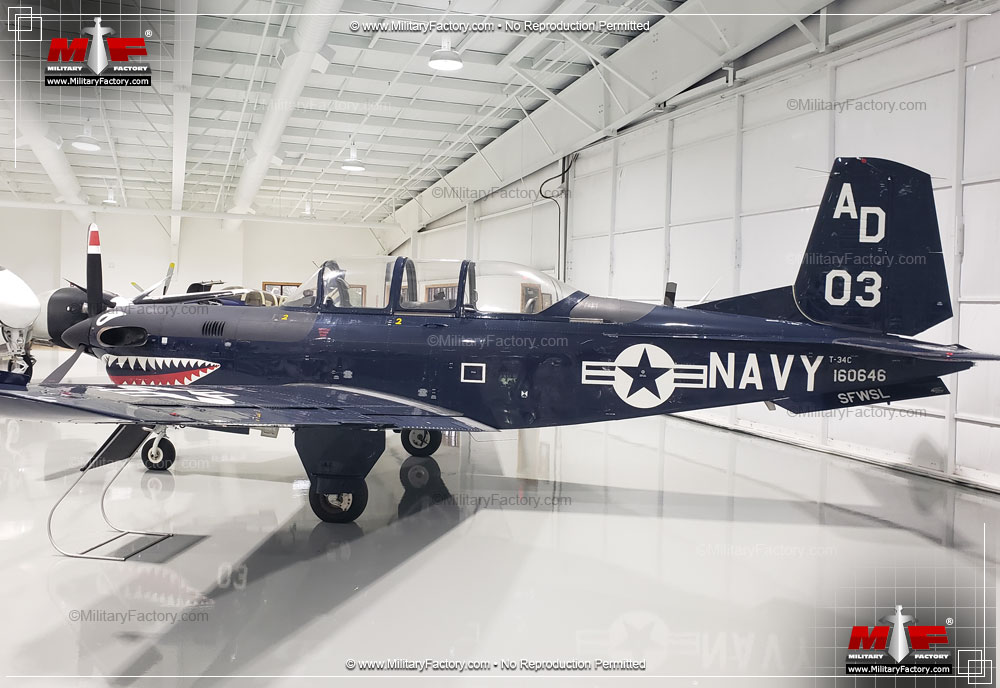 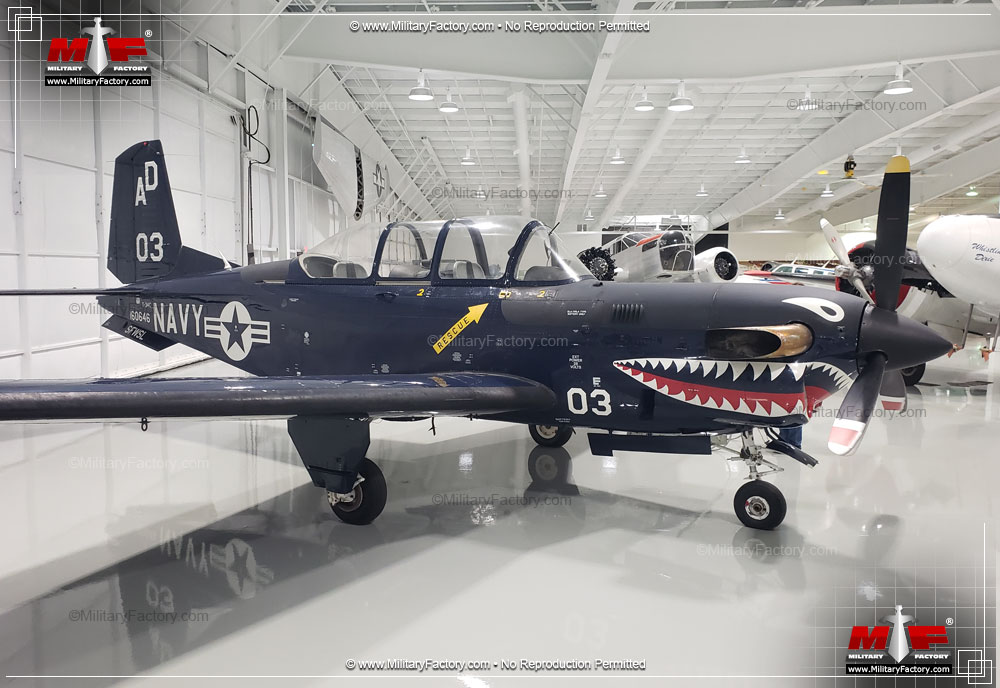 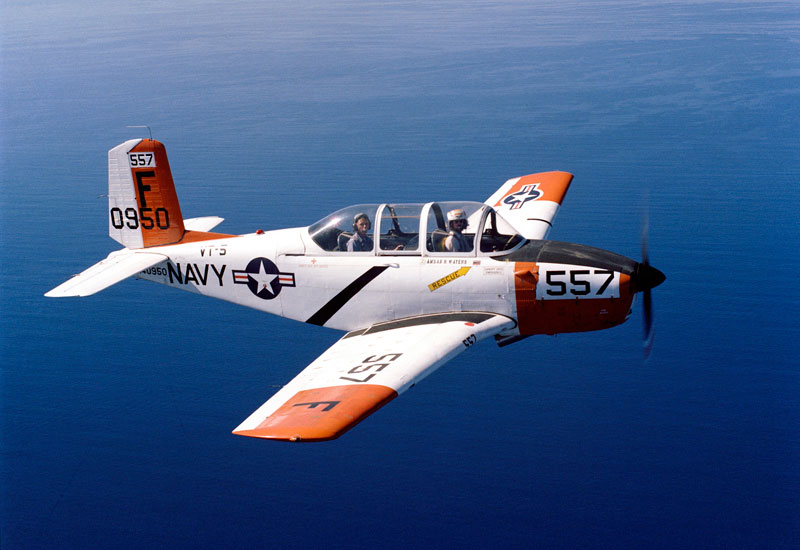 Image from the U.S. Department of Defense imagery database.
5 / 8 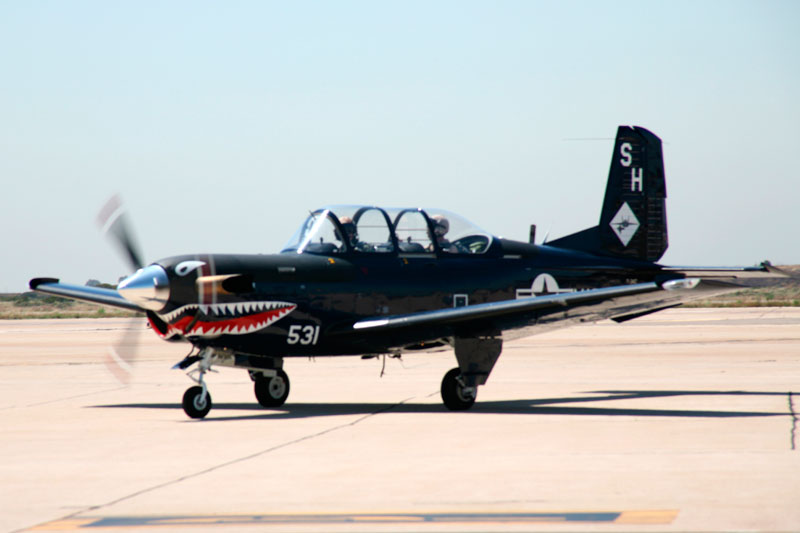 Image from the U.S. Department of Defense imagery database.
6 / 8 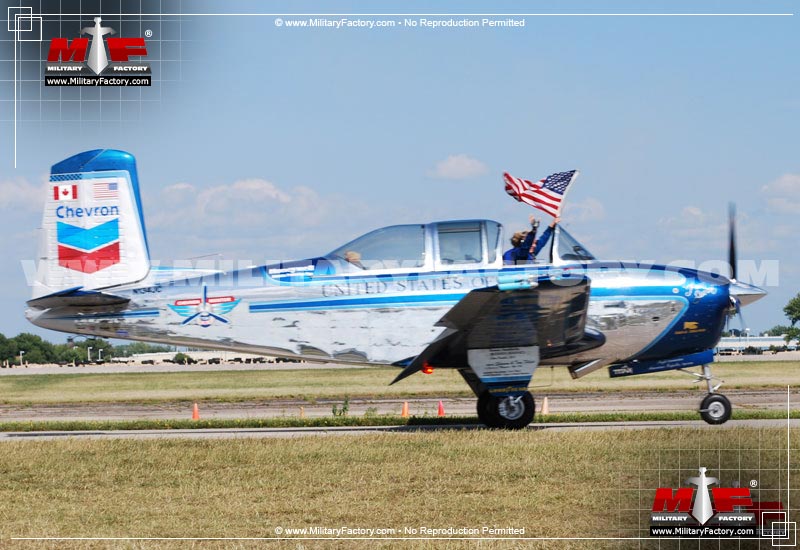 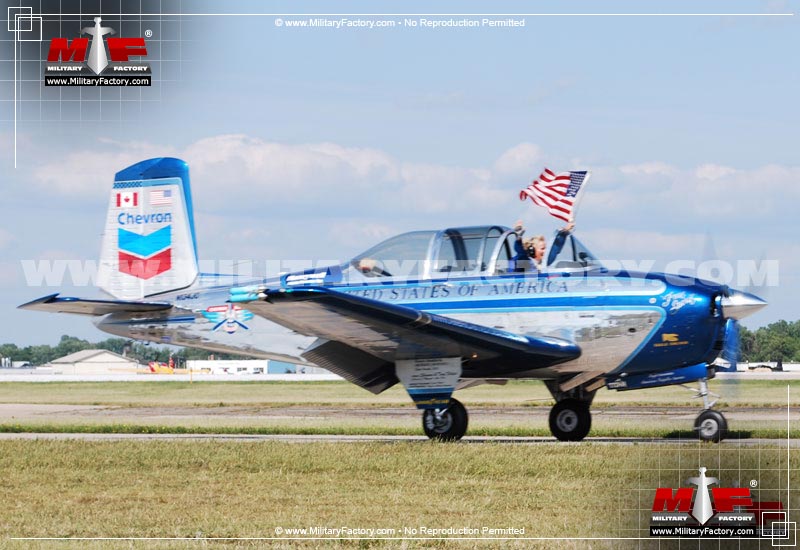 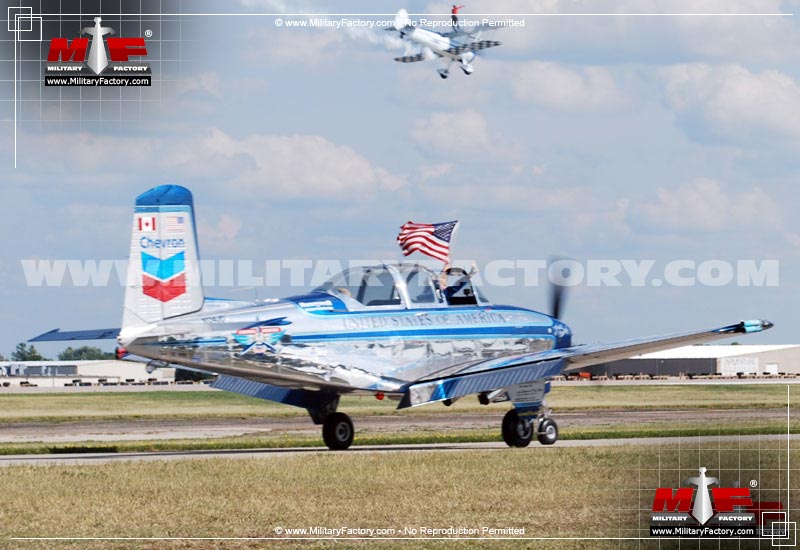