Authored By: Staff Writer | Last Edited: 08/04/2016 | Content ©www.MilitaryFactory.com | The following text is exclusive to this site. 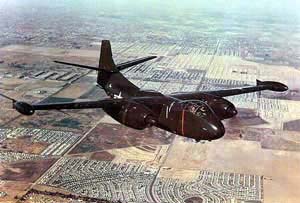 The AJ Savage series of aircraft was a product of the North American Aviation Company for the United States Navy following the Second World War. North American had already made a name for itself by this time with memorable World War Two designs in the P-51 Mustang and the B-25 Mitchell. The AJ Savage was to be no exception, designed specifically to carry an atomic load and becoming North American's first attempt at producing a dedicated "attack" bomber for the US Navy. The system would see years of service throughout the early and middle years of the Cold War.

With turbojet engine development still in its relative infancy, it was somewhat common in the early jet age years to mate established piston engines to newly developed jet powerplants. This was realized in the decision for the AJ Savage development, utilizing two piston radials and a turbojet at rear for additional power support. A large bomb bay could house up to 12,000lbs of internal stores or - in other variants - this space could be used for specialized equipment in the aerial refueling tanker role or that of the aerial photographic reconnaissance platform. No defensive armament was afforded the system.

The prototype XAJ-1 Savage aircraft made its maiden flight on July 3, of 1948. The system was a heavy-class attack bomber, mating the two Pratt & Whitney-brand R-2800-44W piston engines (rated at 2,400 horsepower each) and a single Allison J33-A-10 turbojet engine (rated at 4,600 pounds). The piston engines were mounted in their traditional twin-engine bomber locations, one per wing element, whilst the turbojet was fitted to the rear section of the aircraft. Wings were of a high-wing monoplane design (and foldable for carrier storage) and a single vertical tail component made up the features of the empennage. With all engines firing, the system was capable of over 470 miles per hour and could reach ranges of up to 1,600 miles. Crew accommodations amounted to three personnel. Production AJ-1 models were fielded as soon as 1949, though carrier operations with the system were not to begin until 1950. The USS Coral Sea was the first US Navy vessel to begin reception of the AJ-1 systems, to which some 140 examples were delivered.

The Savage airframe was modified to fulfill other roles as well, becoming an aerial tanker (AJ-1) in one form and the AJ-2P - a photographic reconnaissance model in another. The AJ-2P appeared with a modified nose assembly mounting some eighteen different camera systems while other specialized equipment was held in the fuselage. The AJ-2P systems went on to form a vital part of US Navy reconnaissance groups for the early part of the Cold War.

Designation changes for the AJ-1 Savage series occurred in 1962, now becoming the A-2 Savage.©MilitaryFactory.com
Note: The above text is EXCLUSIVE to the site www.MilitaryFactory.com. It is the product of many hours of research and work made possible with the help of contributors, veterans, insiders, and topic specialists. If you happen upon this text anywhere else on the internet or in print, please let us know at MilitaryFactory AT gmail DOT com so that we may take appropriate action against the offender / offending site and continue to protect this original work.
Advertisements

United States
(OPERATORS list includes past, present, and future operators when applicable)
✓ Ground Attack (Bombing, Strafing)
Ability to conduct aerial bombing of ground targets by way of (but not limited to) guns, bombs, missiles, rockets, and the like. ✓ Maritime / Navy
Land-based or shipborne capability for operating over-water in various maritime-related roles while supported by allied naval surface elements.

(Showcased performance specifications pertain to the North American AJ-1 (A-2A) Savage production variant. Performance specifications showcased above are subject to environmental factors as well as aircraft configuration. Estimates are made when Real Data not available. Compare this aircraft entry against any other in our database or View aircraft by powerplant type)
OPTIONAL:
Up to 12,000 lb of internal stores including support for nuclear payloads. 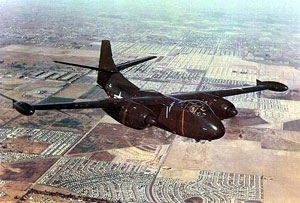 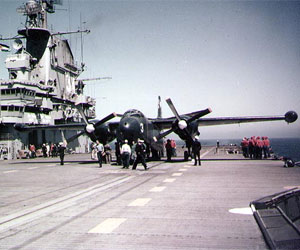