The Granville Gee Bee series was the quintessential air racer of the 1930s - though she proved to be quite dangerous to her own pilots.

Authored By: Staff Writer | Last Edited: 05/07/2021 | Content ©www.MilitaryFactory.com | The following text is exclusive to this site. 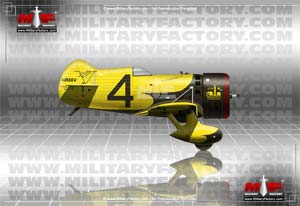 The Gee Bee (deriving its name from a shortened form of "Granville Brothers") racers became the unofficial symbol of the "Golden Age" of flight during the interwar years. Its unique design and high-speed performance allowed it to take part in many of the air races that treated fans to something more than what was to be found in the Great Depression. The collapse of world markets all but killed the sport plane business, forcing many smaller aircraft firms to take a turn in designing and producing new implements suitable for air racing - and the prize money inherent in such competition. The Granville line of racers proved quite the success for the little Granville company.

Granville Brothers Aircraft was a relatively small aircraft repair business based out of Springfield, Massachusetts. It was led by five brothers - known collectively as "The Granville Brothers" hence "GB" or "Gee Bee" - consisting of Zantford (of Boston and founder of the company), Thomas, Robert, Mark and Edward. The firm came into existence in 1929 and actively operated until 1934 to which the company was forced to file for bankruptcy. Despite their collapse, Granville racers were still airborne into the latter half of the 1930's with their most memorable models becoming the Gee Bee Z, R-1 and R-2 racers. Granville's aircraft designs operated from Springfield Airport in Massachusetts.

The Granville firm produced just 24 total aircraft during their time aloft. Sadly, many of these designs proved quite lethal in many trained hands and led to multiple crashes and a near multiple number of fatalities for her pilots. Their first production aircraft became a biplane design in the "Model A". Nine examples were ultimately produced with only one known to be surviving today - this at the New England Air Museum.

The Gee Bee racers were characterized by their thick stoutly fuselage designs complete with low-set monoplane wings and lack of a conventional empennage. The airframe was essentially built around the massive radial piston engine mounted at the extreme forward of the design. The body contained the powerplant and fuel stores to which sat in front of the pilots cockpit, situated at the base of the vertical tail fin. Horizontal planes were visible as protrusions from either side of the vertical tail fin and mounted at the mid-way point of the fuselage sides. As low-mounted monoplanes, the main wings were straight and relatively small with slight dihedral and bracing handled by twin struts running up towards the upper forward fuselage and another pair running down to the faired-over static main landing gears. A simple tail wheel was usually fitted at the base of the empennage in all designs. The pilot was afforded relatively clear views above-forward and to his sides. Other than that, his extreme rearward placement allowed the forward fuselage to block all forward-low views over and out past the engine. Similarly, the small cockpit window areas no doubt forced the pilot to work harder than most - a far cry from the open-air cockpit designs appearing just years before.

Gee Bee design rationale revolved around fitting the most powerful engine available into the smallest airframe possible, with the airframe providing for reduced drag wherever possible. The fuselage was no wider than the engine itself and the lack of a true empennage saved both in weight and drag. The smallish control surfaces and seemingly unforgiving flight characteristics made sure that only experienced pilots need apply. The Gee Bee's airframe had a natural tendency to act as a lifting body, allowing for the racer to make breakneck turns around pylons while maintaining or gaining altitude as opposed to losing it. This design, as inherently beneficial as it might have been, also provided for some deadly flying experiences for many of her pilots.

In all, Granville aircraft appeared in two dozen forms, each with the racing aviator in mind and with many being simple "one-off" developments. The Model X Sportster was completed in time to fly in the Cirrus Derby, though she crashed in September of 1931, her pilot - Roscoe Brinton - successfully bailing out. The Model B Sportster was fitted with a Warner-brand radial piston engine though her history is relatively unknown. Some sources mention that she was utilized in the Spanish Civil War and survived World War 2 altogether, somewhere in Spain. The Model C Sportster sported a Menasco in-line piston engine - quite the departure from the previous radial piston offerings. This model was lost in an air show crash. Similarly, the Model D Sportster was also given a Menasco in-line piston engine, this too being lost in a crash occurring in July of 1936. Pilot Channing Seabury was killed while trying to bail out of the doomed aircraft. The Model E Sportster appeared in four production examples. Sadly, all four were again lost to crashes. The third model was lost in February of 1931, killing pilot Johnny Kytle. The first model was lost in February of 1934 in Spartanburg, South Carolina, killing pilot and Granville brother Z.D. Granville. Russell Boardman was piloting the second model, which crashed in August of 1932. Boardman survived but not without a concussion. Model four was also lost to a crash. The Model Y appeared in to production forms, with both models lost to crashes. The first was a Warner radial-engined mount whose propeller disintegrated, resulting in a crash. The second model was fitted with a test engine from Lycoming but later fitted the Wright Whirlwind. Female aviator Florence Klingensmith lost her life in it during the 1933 National Air Races when her Granville crashed.
Advertisements

Bob Hall (himself winner of the General Tire & Rubber Trophy and a mixed Free-for-All race) designed the Model Z Super Sportster (Gee Bee Z) which became a "one-off" production model, fitting a Wasp engine on loan from Pratt & Whitney and a propeller on loan from Curtiss. This same engine was responsible for a Thompson Trophy victory for the Laird Super Solution just one year before. The new Gee Bee Z model first flew on August 22nd, 1931 and later resulted in the winning of the 1931 Thompson Trophy for Granville. This same Granville was destroyed in a crash on December 5th, 1931, killing pilot Lowell Bayles. Bayles' experiences in the Z were notable for he also won in the Shell Speed Dash and the Goodyear Trophy Race recording speeds of 267.34 and 206.00 miles per hour respectively.

The Model R-1 and Model R-2 were developed at the same time and differed primarily in each design's goal. The Model R-1 was made specifically for achieving top speed in a short-distance course while the Model R-2 was built for achieving top speed in a longer-distance course. Both were fitted with Pratt & Whitney-brand radial piston engines. The ultimate goal for the Granvilles was to complete development of both airframes in time for the upcoming racing season of 1932. The Model R-1 and R-2 were direct successors to the crashed Model Z.

The Model R-1 Super Sportster was also fitted with a Pratt & Whitney Wasp engine of 800 horsepower. World War 2 American legend Jimmy Doolittle (of "Doolittle's Raiders" fame), won the 1932 Thompson Trophy and the Shell Speed Dash award. Doolittle also netted a new world speed record in the R-1 and regarded on the types natural qualities and flying capabilities. On July 1st, 1933, Russell Boardman - survivor of the August 1932 crash in a Model E Sportster - lost his life in the same R-1 Super Sportster flown by Doolittle. The R-1 featured a maximum speed of 294.38 miles per hour and a cruising speed of 260 miles per hour. A range of 925 miles was listed as was a rate-of-climb of up to 6,100 feet per minute.

The Model R-2 Super Sportster fitted the Pratt & Whitney Wasp powerplant. Pilot Jimmy Haizlip was hurt when it crashed in 1933. Remains of the R-1 and R-2 models were joined together as a "mutt" of sorts, producing the aptly-named Model R-1/R-2 Super Sportster. The R-1/R-2 was given another Pratt & Whitney Wasp radial engine and operated until it crashed in 1935, killing pilot Cecil Allen.

The Gee Bee QED was another Pratt & Whitney Wasp-powered radial engined Granville aircraft. A single example was produced and - as expected - crashed on June 7th, 1939. The crash killed pilot Francisco Sarabia. Despite the crash and loss of life, this particular aircraft was rebuilt and later retired as a museum showpiece to be housed at Lerdo, Mexico.

The aircraft was sometimes referred to as "The Flying Silo" for its stout tubular shape, reminiscent of grain storage silos used in farming. The Gee Bee is also featured in the Hollywood motion picture "the Rocketeer" as the chosen mount of fictional pilot Cliff Secord, getting ready to enter the upcoming national air races. True to form, his Gee Bee crashlands on the airfield after it is shot and has one of its landing gears destroyed by a passing car.
Advertisements

RUGGED AIRFRAME Inherent ability of airframe to take considerable damage.
HIGH-SPEED PERFORMANCE Can accelerate to higher speeds than average aircraft of its time.
BAILOUT PROCESS Manual process of allowing its pilot and / or crew to exit in the event of an airborne emergency.
ENCLOSED CREWSPACE(S) Features partially- or wholly-enclosed crew workspaces.

(Showcased performance specifications pertain to the Granville Gee Bee Super Sportster R-1 production variant. Compare this aircraft entry against any other in our database or View aircraft by powerplant type)
None. 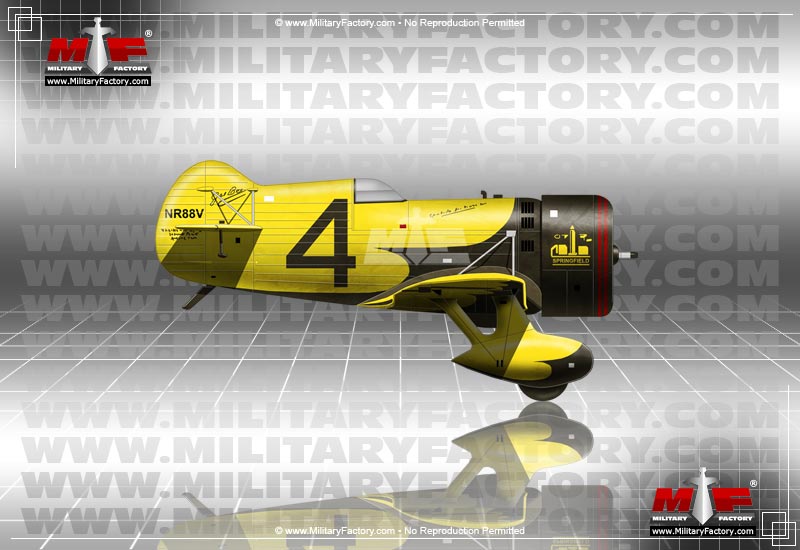 Aviation developments of similar form and function, or related to, the Granville Gee Bee (Series)...