The de Havilland Vampire series of fighter aircraft was the second jet-powered aircraft to be produced by Britain after World War 2. 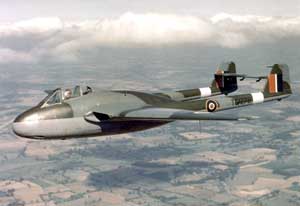 The de Havilland DH.100 Vampire held two key distinctions concerning aviation history - she was the first jet-powered aircraft anywhere to land on a moving aircraft carrier (this completed in her navalized "Sea Vampire" prototype guise) and she was the first jet aircraft in British service to be powered by a single turbojet engine - the previous attempts all fitted engines in pairs due to their low inherent power. To add to her early accolades was the fact that the Vampire became only the second British production military aircraft to be powered solely by jet technology (the Gloster Meteor being the first). The Vampire brought about a relatively new approach to jet fighter design that had usually centered on conversions of existing propeller-driven airframes and the mounting of engines underneath the wings, away from the fuselage. The Vampire did away with these approaches and fitted its engine into a centralized nacelle straddled by twin fuselage "boom" structures. Though arriving too late to see combat in World War 2, the Vampire would go on to find success throughout the ensuing Cold War years with air forces across Europe, the Middle East and the Far East. Design of the Vampire began as early as 1942 but the system did not gain operational status until 1946, the war in Germany had concluded in May of 1945.

British aircraft engineer Major Frank Bernard Halford had developed his H.1 engine (to become the "Goblin" turbojet) with enough thrust that a single installation of its type could power an airframe if given a short exhaust jetpipe for maximizing energy output and minimizing thrust loss. Halford combined resources with the de Havilland aviation firm and the DH.99 design was born. The DH.99 featured a twin-boom fuselage layout with a central nacelle containing the cockpit, proposed armament of four cannons, a powered retractable tricycle undercarriage and the jet powerplant. The skin was of all-metal and a short central fuselage nacelle was used to supply the shorter jet pipe length. After review, the Ministry of Aircraft Production requested the aircraft to feature construction of both wood and metal to which de Havilland obliged - having already garnered much hybrid construction practices with their war-winning prop-powered DH.98 Mosquito series. This revision created the new designation of "DH.100" in November of 1941. British authorities were intrigued enough to order a pair of prototypes under Specification E.6/41 and detailed design work was started on new aircraft then known as the "Spider Crab" in the middle of 1942. The prototype was assigned the in-house designation of LZ548/G.

First flight of a prototype occurred on September 20th, 1943 out of Hatfield with Geoffrey de Havilland, Jr at the controls. This aircraft was fitted with a Goblin 1 turbojet engine producing 2,700lbs of thrust. De Havilland, Jr. was the son of Geoffrey de Havilland, Sr., founder of the de Havilland firm. Delays meant that the fighter would not see production of the F.Mk I model until 1945, the initial production version flying for the first time in that year. Once the evaluations were complete and the DH.100 was accepted into service (know under the name of "Vampire") and production was outsourced to English Electric to allow de Havilland's facilities to work on other more pressing wartime needs. As such, most of the early Vampires were in fact English Electric products and some 244 of the initial Mk I fighters were ultimately delivered. The Vampire was also branched into the DH.113 dedicated nightfighter with radar, originally intended for Egypt, but redirected to the Royal Air Force due to an arms ban on the nation by the British government. The Vampire was spawned into the ever important trainer in the DH.115 Vampire T.11 and, amazingly, Vampire trainers were in RAF service up until 1966. At its peak usage, the Vampire stocked some 19 Royal Air Force squadrons around the world and a total of 3,268 examples of some 15 complete variants were ultimately produced for the British, Commonwealth forces and export customers.©MilitaryFactory.com
Advertisements

The finalized Vampire was designed as a twin boom layout with the cockpit seated in its centralized nacelle along with the engine. Intakes were fitted at the wing roots and aspirated the de Havilland Goblin series turbojet powerplant which exhausted out of the rear of the nacelle through a ring. The booms extended from mid-chord on the monoplane wings which were themselves mid-set along the fuselage sides. Each boom held a small-area vertical tail fin and were connected at the extreme aft of the design by a large-area horizontal stabilizer. While a fighter first, the Vampire was eventually given strike duties as second. Standard armament centered around a battery of 4 x 20mm Hispano Mk.V cannons fitted to the forward fuselage underside. Optional ordnance - up to 2,000lbs - could be carried under the wings (or fuel drop tanks in their place) when provisions were ultimately added. This also included up to 8 x 3-inch 60lb unguided rockets or 2 x 500lb drop bombs.

The F.Mk I fighter model was followed by the F.Mk 3 fighter which was given underwing hardpoints for external stores. Some modifications to the airframe were also accomplished to help improve the aircraft's longitudinal stability. The F.Mk 3 was then followed into service by the FB.Mk 5 development which was a fighter-bomber construct, further modified with a shorter - yet inherently stronger - wingspan for improved ordnance capability. The FB.Mk 5 became the basis for the "navalized" FB.Mk 20 and FB.Mk 21 "Sea Vampires" of the Royal Navy. These featured improved storage capability and a reinforced structure. A Sea Vampire prototype completed a carrier landing (HMS Ocean) on December 3rd, 1945, selling the Royal Navy on the Vampire line for its future carrierborne fighter needs. The FB.Mk 5 spawned the similar FB.Mk 6 and the FB.Mk 50 featuring a variety of deHavilland Golbin and Rolls-Royce Nene turbojet engines. Other Vampire marks went on to serve as "one-off" developmental models or limited production examples.

The FB.MK 9 was a "tropicalized" Vampire modified for the rigors of high-temperature operations particularly in the Middle East and included a cockpit air conditioner. De Havilland completed production of some 326 of these aircraft. Further developments included a side-by-side nightfighter in the form of the NF.Mk 10 to which France received as the NF.Mk 54. Ninety-five NF.Mk 10 nightfighters were produced for the RAF who later sold these as refurbished units to the Indian Air Force during the 1950s. The T.Mk 11 trainer mimicked this same side-by-side style cockpit arrangement as did the Sea Vampire T.Mk 22 series. Australian trainers were the T.Mk 33, T.Mk 34 and T.Mk 35 models. The export two-seat trainer Vampire was sold under the T.Mk 5 designation.

Upon inception, the Vampire was fielded as part of the United Kingdom homeland defense force throughout the early years of the Cold War and served as the nation's first line of aerial defense against expected aggression from the Soviet Union. Vampires served in this role until being replaced by the improved Gloster Meteor F.Mk 8 series. The fighter also served in the inventories of the British Commonwealth nations including Australia and Canada. Furthermore, the Vampire was ultimately offered up for export and customers included countries across both Europe and the Middle East. The Vampire was eventually superseded in the de Havilland family line by the DH.112 "Venom" series, another of de Havilland's jet-powered, twin-boom designs.

The Vampire series as a whole was active in the skies around the world well into the 1980s, a sure testament to her design and value. Without much of an air industry in the post-war world, France undertook local production of the British Vampire through SNCASE (Societe nationale des constructions aeronautiques du Sud-Est - or simply "Sud-Est") at Marseilles and designated their machines as SE 535 "Mistral". Similarly, the Italian firm of Macchi produced some 80 Vampires all their own, as did the Swiss with a production total of 178 aircraft.©MilitaryFactory.com
Note: The above text is EXCLUSIVE to the site www.MilitaryFactory.com. It is the product of many hours of research and work made possible with the help of contributors, veterans, insiders, and topic specialists. If you happen upon this text anywhere else on the internet or in print, please let us know at MilitaryFactory AT gmail DOT com so that we may take appropriate action against the offender / offending site and continue to protect this original work.
Advertisements

(Showcased performance specifications pertain to the de Havilland DH.100 Vampire F.I production variant. Performance specifications showcased above are subject to environmental factors as well as aircraft configuration. Estimates are made when Real Data not available. Compare this aircraft entry against any other in our database or View aircraft by powerplant type)
STANDARD, FIXED:
4 x 20mm Hispano Mk.V cannons under forward fuselage.

Up to a maximum of 2,000lb of external drop/launch ordnance. 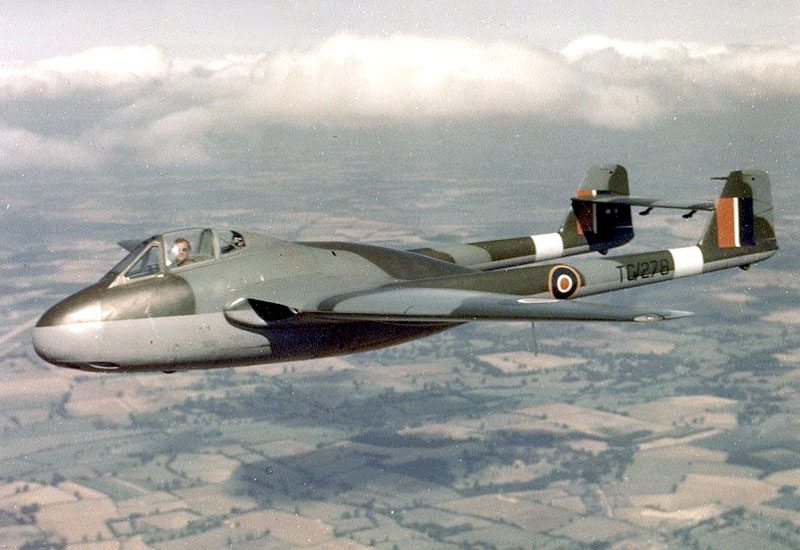 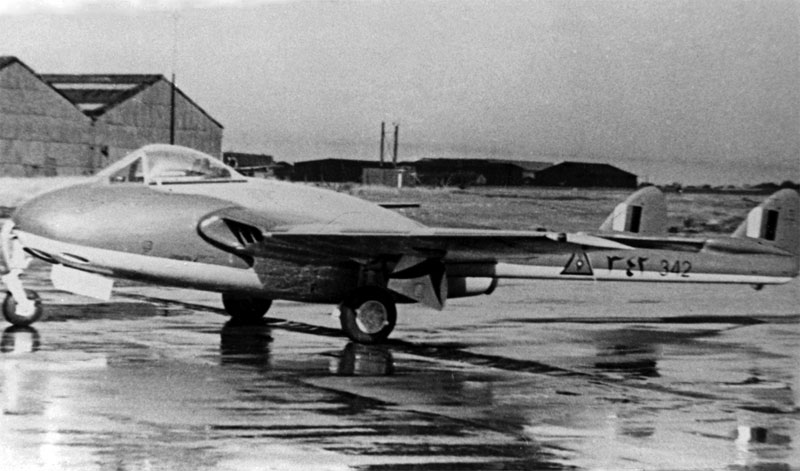 Aviation developments of similar form and function, or related to, the de Havilland DH.100 Vampire...