With service entry in the mid-1970s, the McDonnell Douglas F-15 Eagle went on to become a classic American fighter aircraft showcasing an excellent combat record.

Authored By: Staff Writer | Last Edited: 05/29/2022 | Content ©www.MilitaryFactory.com | The following text is exclusive to this site. 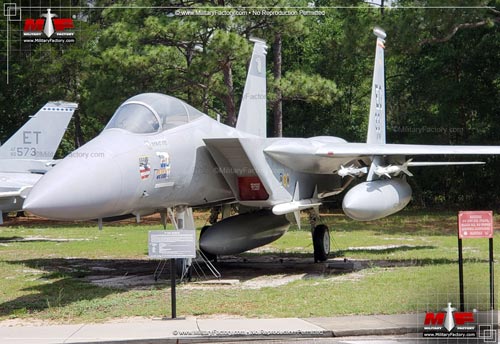 For a time, the McDonnell Douglas (now under Boeing) F-15 Eagle series was the pinnacle of American air superiority, incorporating advanced technologies and forward-thinking design that evolved into a highly maneuverable and performance-enhanced multi-role fighter platform. The F-15 was designed to succeed the highly-respect, but ultimately aged, McDonnell F-4 Phantom II series from the Vietnam War years and would go on to achieve an excellent kill-to-loss record - at one time totaling 100 combat kills to no losses.

The F-15 (in its air superiority/interceptor form) entered service with the United States Air Force in 1976 and was quick to position itself as the best fighter platform in the world - capable of engaging any enemy aircraft at range. The prototype was designated the YF-15A with the first production models taking on the F-15A designation. This was followed by the two-seat F-15B (initially the TF-15A) two-seat variant. The F-15C was another single-seat model introducing the F100-P-220 series engines. The F-15D was of similar scope though a two-seat version. The aircraft first saw combat actions in Israeli hands when Israeli F-15's shot down Soviet-produced Syrian Mikoyan-Gurevich MiG-21 "Fishbed" fighters in a much publicized confrontation. Since then, the series has been introduced in a variety of limited "flavors" including a two-seat trainer conversion model, a strike platform and the improved "Strike Eagle" two-seat attack variant.

The base interceptor F-15 Eagle provides the pilot with a modern approach to air combat complete with digital avionics and engine systems as well as cockpit management through multi-function displays (MFDs) and a detailed Heads-Up Display (HUD) unit. This provides the pilot with the ability to fly the aircraft without taking his view from the action ahead and outside. The powerful afterburning Pratt & Whitney afterburning turbofan engines can propel the F-15 to speeds upwards of 1,600 miles per hour.

The newer F-15E "Strike Eagle" variant provides much improved avionics capabilities and incorporates a second rear-seated crew member to assist in the redefined strike role. The system, retaining all of its dogfighting pedigree, is now made more potent with the addition of air-to-ground capabilities through the fielding of precision-guided munitions and missiles. Strike Eagle models entered service in 1988 and continue to play a vital role in USAF air combat activities around the globe.©MilitaryFactory.com
Advertisements

Standard armament for the F-15 includes a 20mm M61A1 Gatling-style internal cannon for close-in combat. This is offset at longer ranges by the AIM-9 "Sidewinder", AIM-7 "Sparrow", and AIM-120 "AMRAAM" air-to-air missiles. For the ground attack role, the F-15 utilizes the family of GBU laser-guided/electro-optically guided bombs, JDAMs, cluster bombs, HARM anti-radiation missiles, the venerable AGM-65 "Maverick" air-to-surface missile, and conventional drop bombs. Due to its origins in the Cold War, the F-15 was also designed to carry and release the B51 and B61 series of nuclear bombs if required.

Because of strict American regulation of exports, few international customers are actually allowed to purchase the F-15 Eagle. The few that have include Israel, Japan and Saudi Arabia. Israeli F-15's are designated as the F-15I "Ra'am" (or "Thunder") and were delivered from 1998 onwards, drastically broadening the capabilities of the Israeli Air Force (IAF). For Japan, the F-15 serves in its Self-Defense Force (SDF) under the designation of F-15J (single-seat) and F-15DJ (twin-seat) and are locally-produced under license. Saudi Arabia is one of the largest foreign operators of the mount with at least 70 in operation as of this writing (2012) and a further 84 having been announced in a US DoD release on March 8th, 2012. The official US DoD announcement is as follows:

"The Boeing Co., Mo., is being awarded an $11,399,100,000 firm-fixed-price, cost-plus-fixed-fee, time-and-materials contract to fulfill the Foreign Military Sales requirement of the Kingdom of Saudi Arabia to procure 84 new F-15 Saudi advanced aircraft with systems and munitions. This particular undefinitized contract action covers development efforts for the new aircraft and retrofit as well as procurement of the 84 new production aircraft. The locations of the performance are El Segundo, Calif., Ocala, Fla., and Cedar Rapids, Iowa. Work is expected to be completed October 2020. ASC/WWQ, Wright-Patterson Air Force Base, Ohio, is the contracting activity (FA8634-12-C-2651)."

With the arrival of the Lockheed F-22 "Raptor" next generation aircraft, the end of the road is in sight for the F-15 Eagle, bringing a close one of the most combat-capable aircraft ever designed. Until the inevitable occurs, the F-15 will undoubtedly continue to serve in a frontline role for some time to come.©MilitaryFactory.com
Note: The above text is EXCLUSIVE to the site www.MilitaryFactory.com. It is the product of many hours of research and work made possible with the help of contributors, veterans, insiders, and topic specialists. If you happen upon this text anywhere else on the internet or in print, please let us know at MilitaryFactory AT gmail DOT com so that we may take appropriate action against the offender / offending site and continue to protect this original work.

March 2015 - It was reported that, due to the slow introduction of the highly-touted Lockheed F-35 Lightning II and limited availability of Lockheed F-22 Raptors, an existing fleet of 413 USAF F-15 Eagles (C- and E-models) will see a modernization program through Boeing that will keep the 1970s-era F-15 series airworthy/combat-worthy until 2040. Key to the upgrade will be introduction of the Eagle Passive/Active Warning and Survivability System (EPAWSS) that includes a digital Radar Warning Receiver (RWR), fiber-optic towed decoy system, and a new chaff/flare dispenser unit.

October 2015 - After its failure to sell Israel, South Korea and the USAF on its F-15SE "Silent Eagle" stealth upgrade (detailed elsewhere on this site), Boeing is no pushing a new F-15 upgrade plan for aging F-15C air superiority fighters - the "F-15 2040C". 2040C is a less ambitious take on the Silent Eagle initiative which intended to bring about inherent stealth features to the F-15 line. The new plan involves bringing about some of the Silent Eagle qualities but, more importantly, increasing the missile-carrying load and utilizing Conformal Fuel Tanks (CFTs). Images depict an F-15C with a full sixteen missile load as hardpoints will be strengthened and doubled to carry multiple missiles. As its designation suggests, the 2040C upgrade is intended to keep the F-15C a viable instrument of war into 2040 or longer.

September 2016 - A $12 billion program has been announced to keep USAF Eagles viable until at least 2040. The upgrades will include new radar fits, support for up to sixteen AAMs and modern communications. Increased capabilities with search-and-track, engagement and lethality are hoped for the new bird - which now must fill the void left by the reduced purchase of F-22 Raptor 5th Generation Fighters. Introduced in 1976, the F-15, if flown into 2040, will have completed a service life spanning nearly 65 years.

January 2017 - The Saudi Air Force has received its first F-15SA (a version of the F-15E "Strike Eagle") of the 84 aircraft planned for service.

January 2018 - Qatar has closed on a deal for 36 Boeing F-15QA model fighters with deliveries expected to be completed before 2023.

May 2018 - Israel has offered to purchase additional F-15 aircraft from Boeing under the stipulation that its existing 18+ years-old F-15I fleet be upgraded as well. Modernization would include an upgraded cockpit with large-area display and a general extension to the service life of the aircraft. The deal is estimated at $4 billion USD.

December 2018 - The proposed, all-modern single-seat F-15X "Advanced Eagle" will be included in the USAFs2020 budget request to succeed the aging fleet of F-15C and F-15D single-seat model fighters.

January 2019 - The Japan Ministry of Defense is planning to upgrade some twenty of its Boeing F-15 Eagle fleet.

March 2019 - The USAF has made a move to acquire eight F-15EX examples as a short-term, budget-conscious alternative to purchasing additional, pricey F-35A platforms. These would succeed some F-15C models in service and facing retirement in the next decade. As many as 80 F-15EX aircraft could be had.

October 2019 - The American government has approved a plan for the upgrade of some 98 F-15J fighters serving the Japanese Air Self-Defense Force (JASDF). The initiative is known as the "Japanese Super Interceptor" and will include upgrades to the Electronic CounterMeasures (ECM) suite, computer processing, and radar fit.

January 2020 - The USAF has begun fleshing out plans for acquiring the new F-15EX fighter model powered by General Electric F110 afterburning turbofan engines to keep the F-15 fleet viable for the near-future.

February 2020 - Boeing may pitch its F-15EX fighter to India, who seeks an all-modern solution for its aging frontline fighter fleet. The Boeing F/A-18E/F is already a contender.

April 2020 - The F-15QA variant destined for the Qatari Royal Air Force has begun its flight testing phase. Deliveries are expected during 2021.

July 2020 - The USAF has procured eight examples of the F-15EX fighter. First deliveries are planned for middle-late 2021 with the remainder following in 2023.

February 2021 - Boeing has flown the first iteration of its F-15EX platform. The successful flight, spanning some 90 minutes, took place from its St. Louis location on February 2nd, 2021.

August 2021 - Boeing has revealed its F-15QA entry destined for Qatar; ferry flights are expected to take place before the end of the year.

May 2022 - The U.S. and Indonesia are actively discussing a deal for F-15 fighter jets. The agreement could cover as many as 36 aircraft for the frontline role.

RADAR-CAPABLE Houses, or can house (through specialized variants), radar equipment for searching, tracking, and engagement of enemy elements.
COUNTERMEASURES Survivability enhanced by way of onboard electronic or physical countermeasures enacted by the aircraft or pilot/crew.
MULTI-ENGINE Incorporates two or more engines, enhancing survivability and / or performance.
WING SWEEPBACK Mainplanes, or leading edges, features swept-back lines for enhanced high-speed performance and handling.
HIGH-ALTITUDE PERFORMANCE Can reach and operate at higher altitudes than average aircraft of its time.
EXTENDED RANGE PERFORMANCE Capability to travel considerable distances through onboard fuel stores.
PILOT / CREW EJECTION SYSTEM Assisted process of allowing its pilot and / or crew to eject in the event of an airborne emergency.
CREWSPACE PRESSURIZATION Supports pressurization required at higher operating altitudes for crew survival.

Mission-specific ordnance can include any of the following: 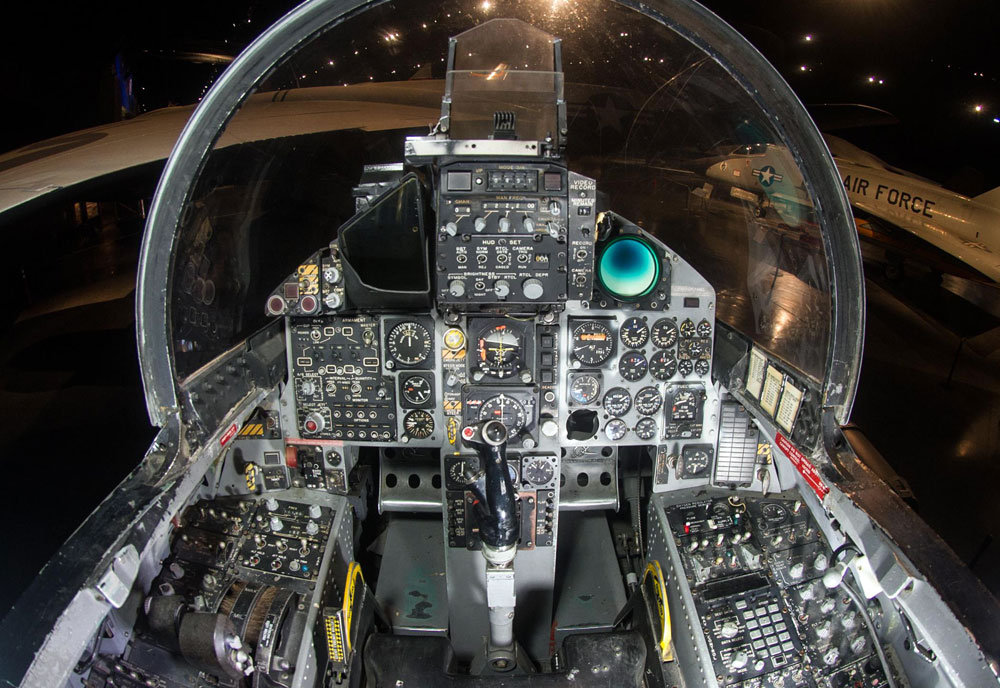 General Assessment
Firepower
Performance
Survivability
Versatility
Impact
Values are derrived from a variety of categories related to the design, overall function, and historical influence of this aircraft in aviation history.
Overall Rating
The overall rating takes into account over 60 individual factors related to this aircraft entry.
100
Rating is out of a possible 100 points.
Firepower Index (BETA) 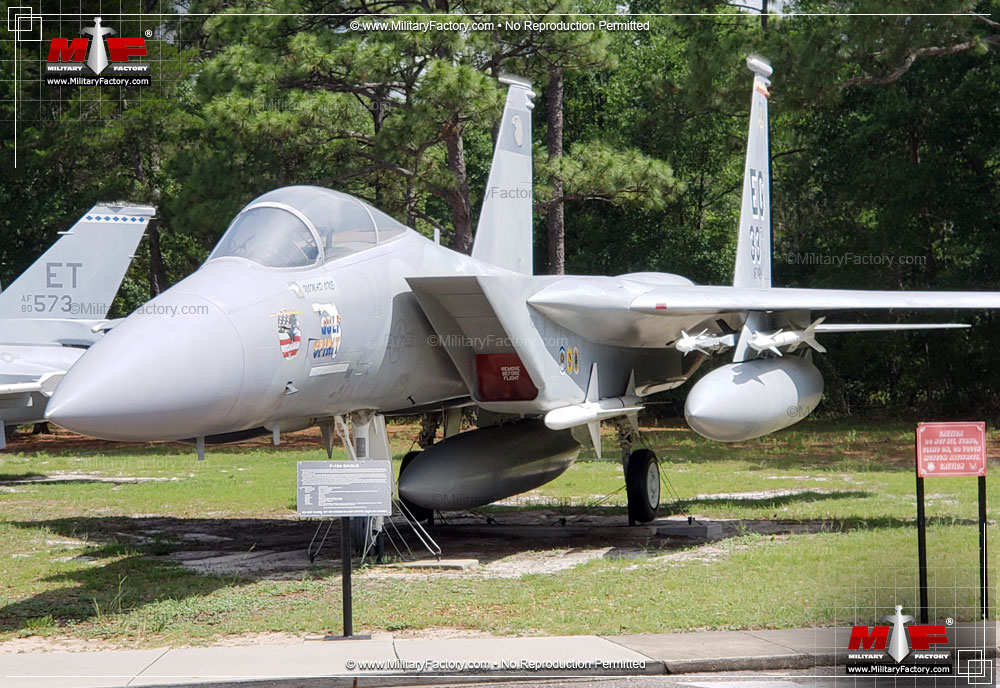 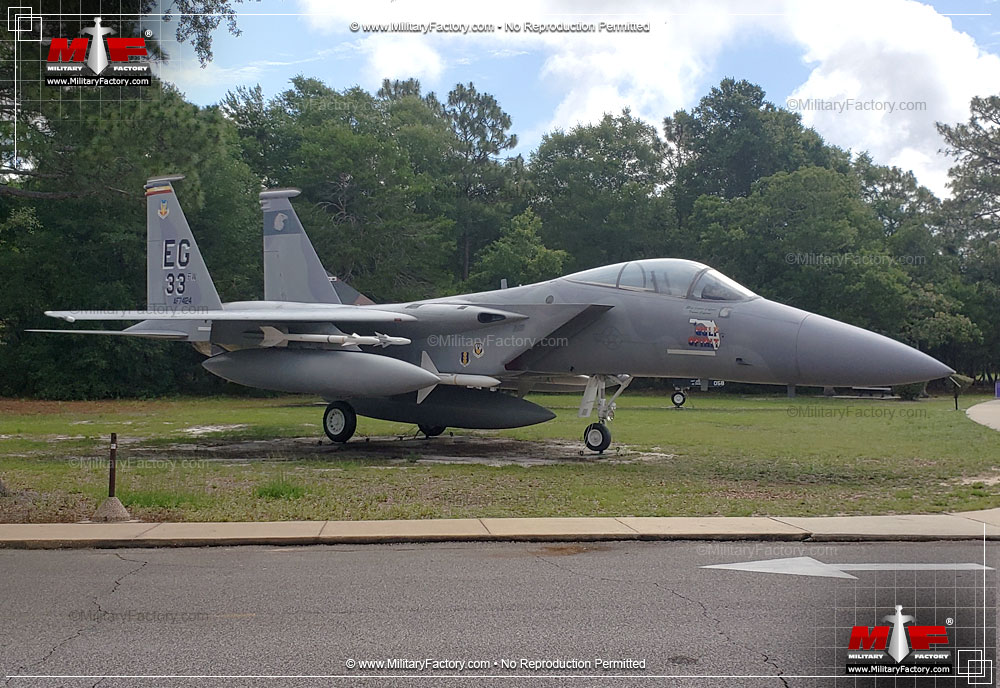 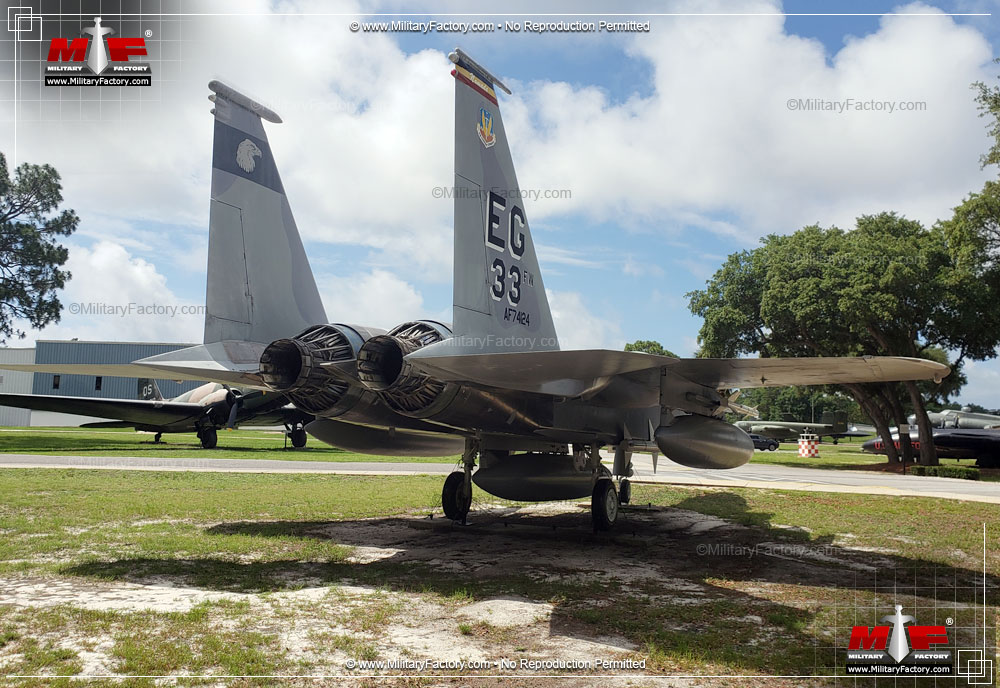 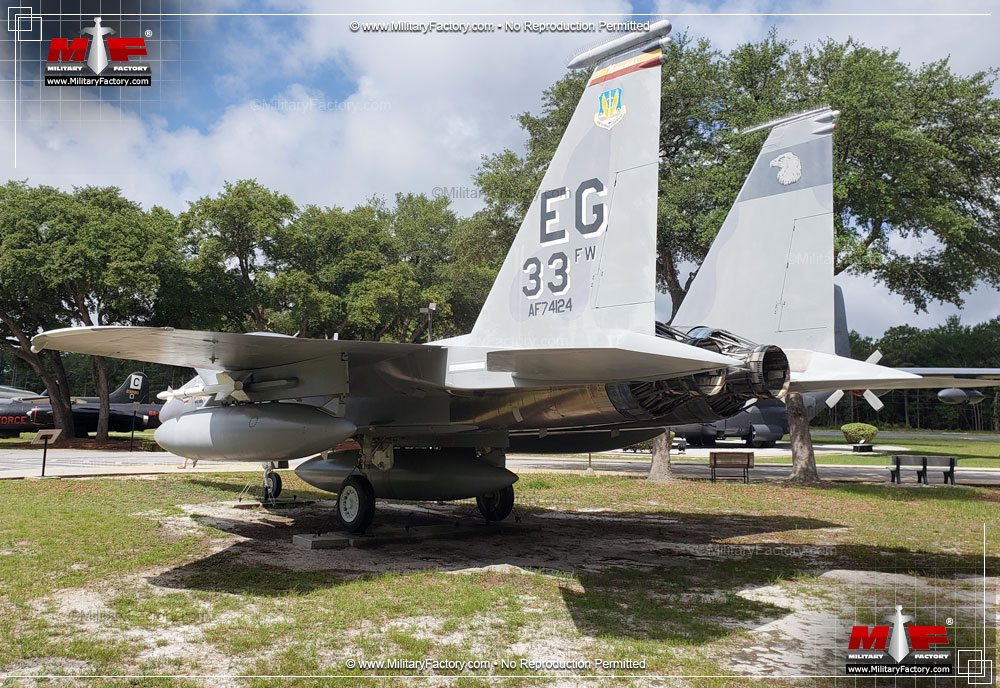 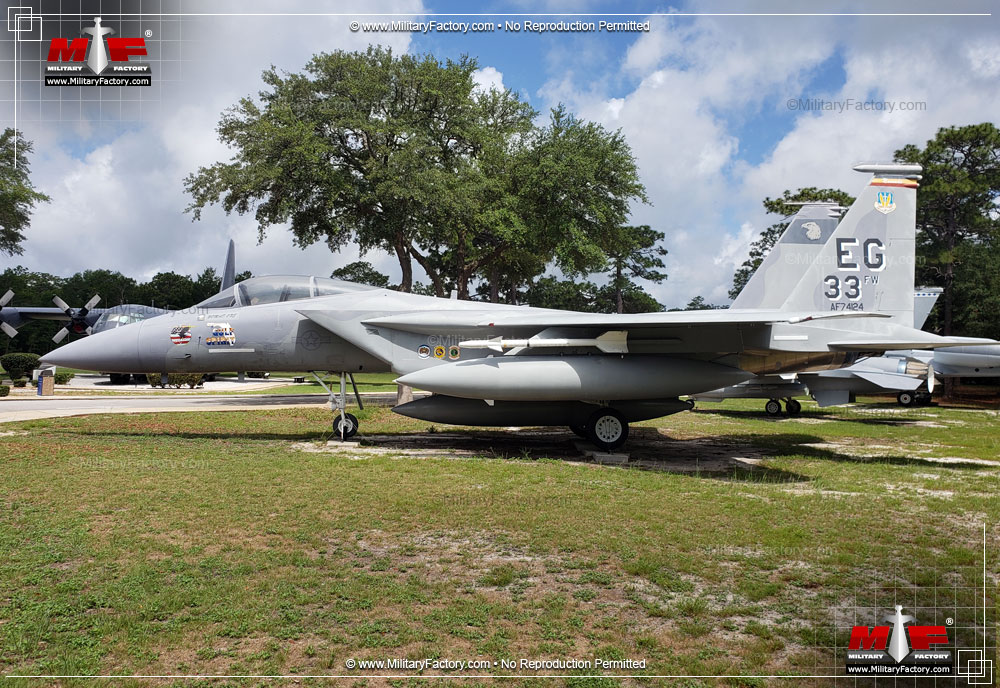 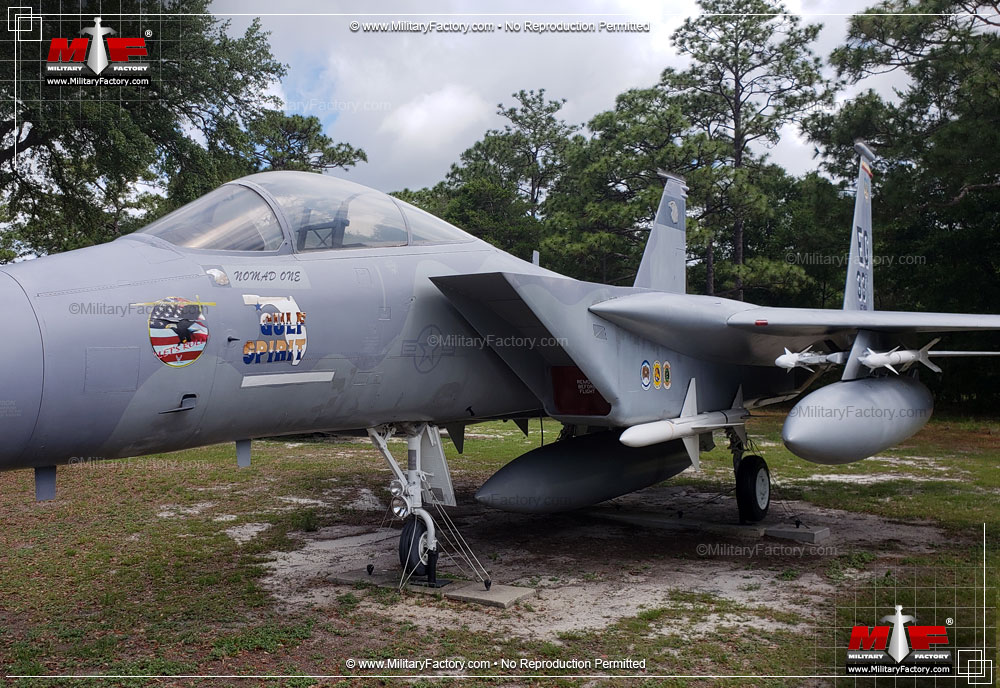 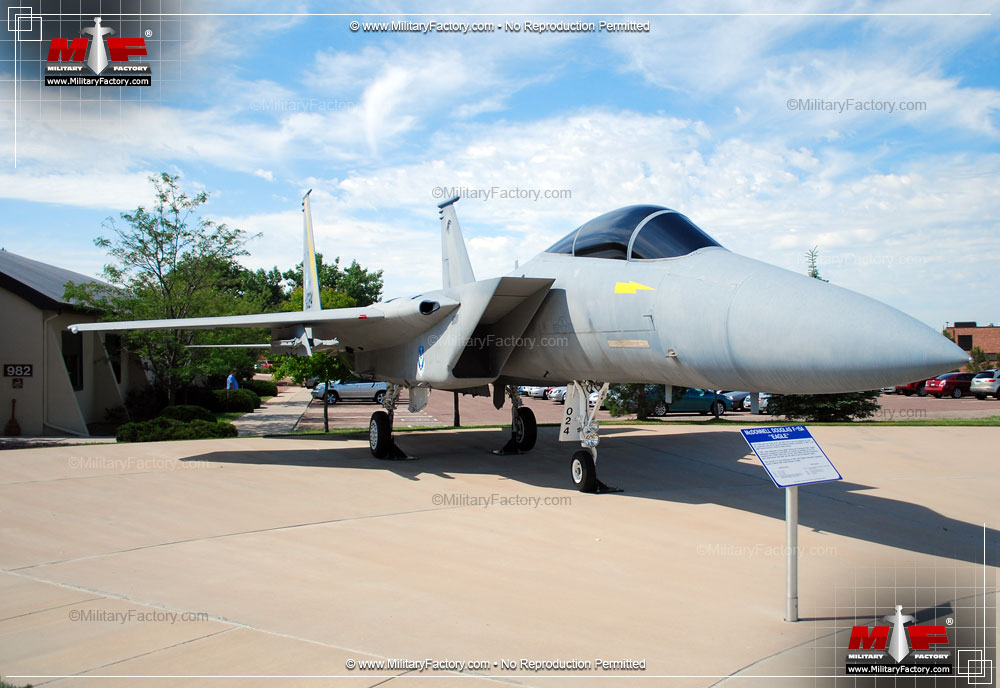 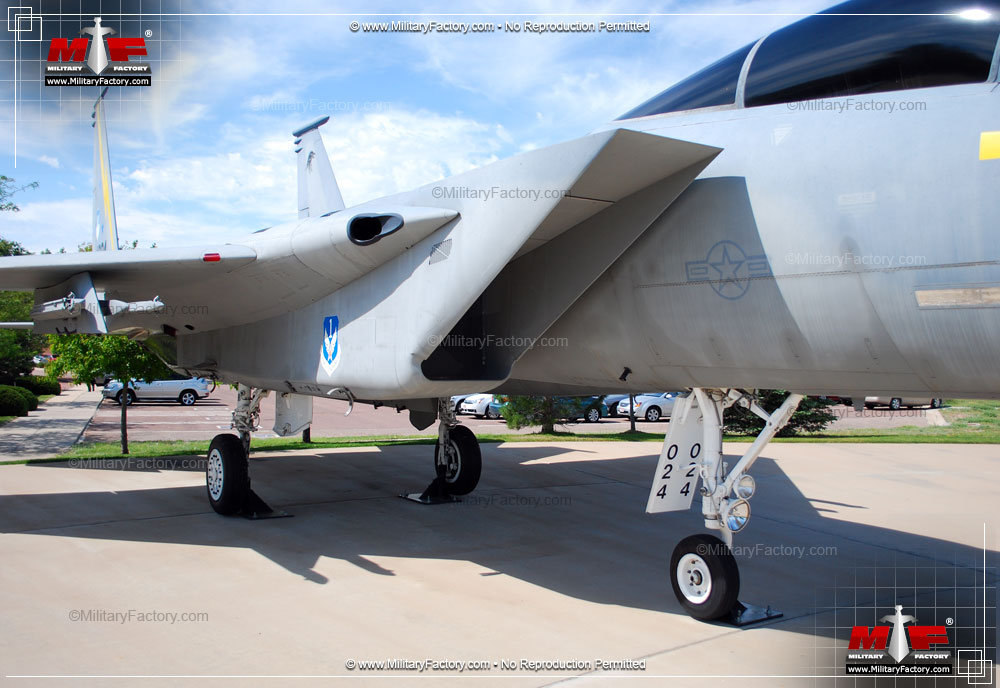 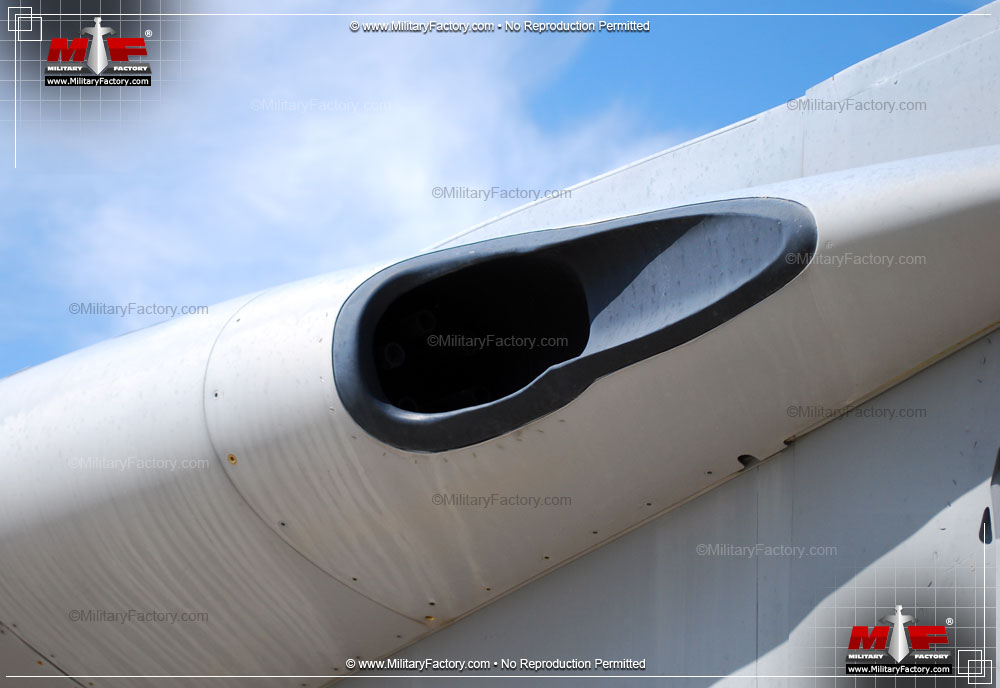 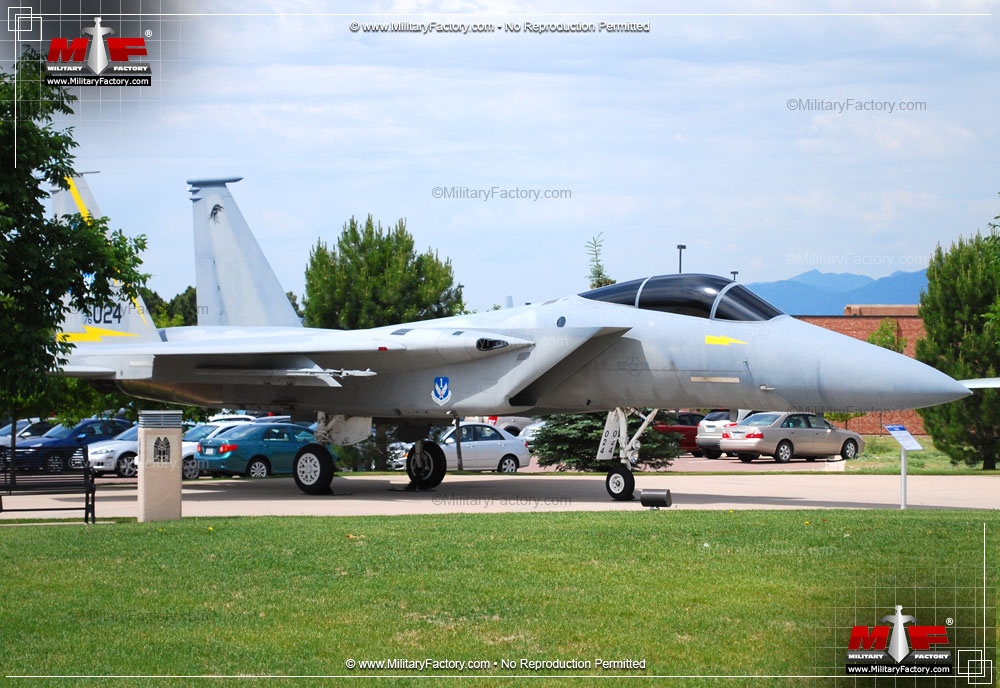 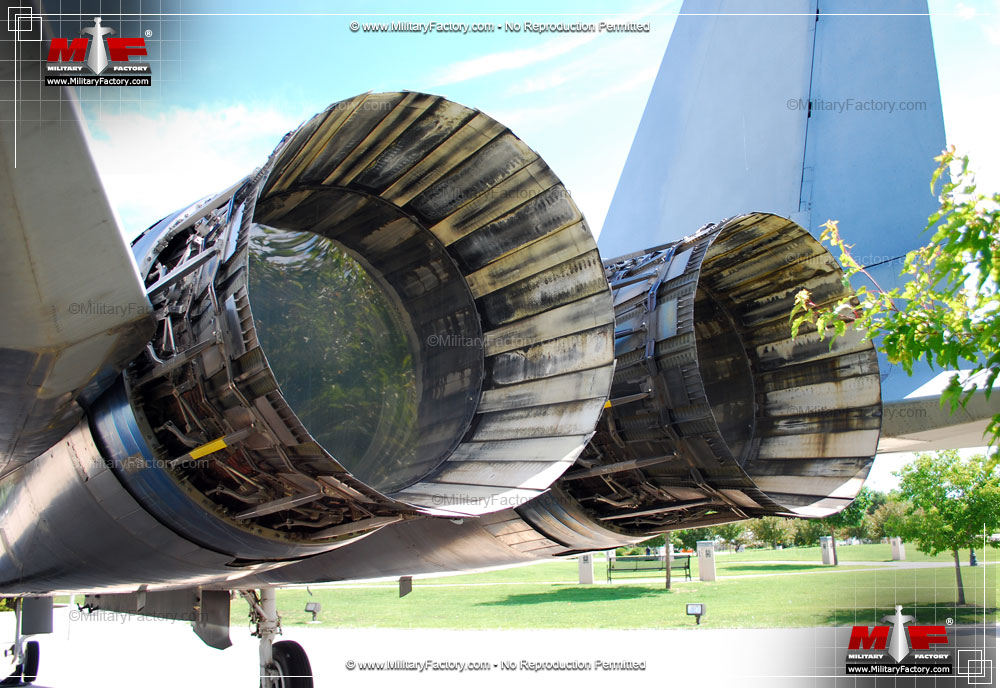 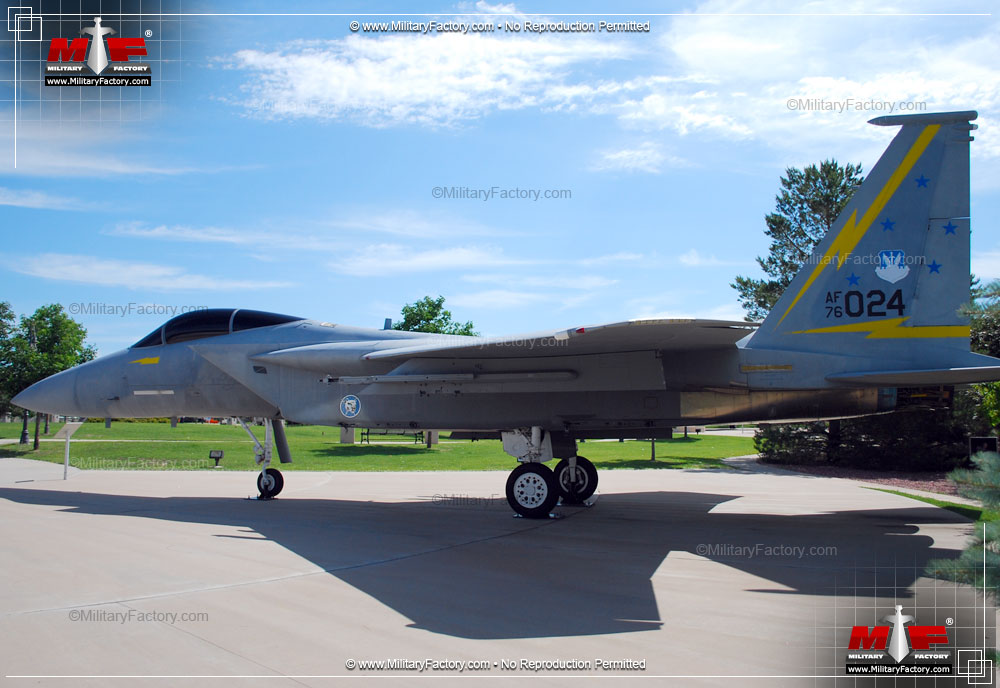 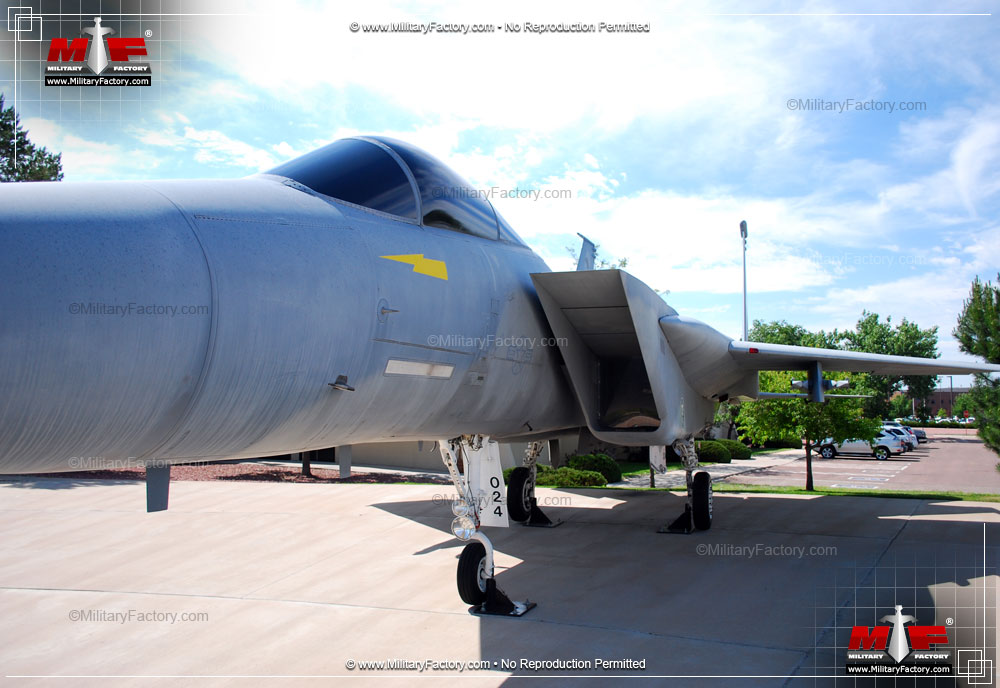 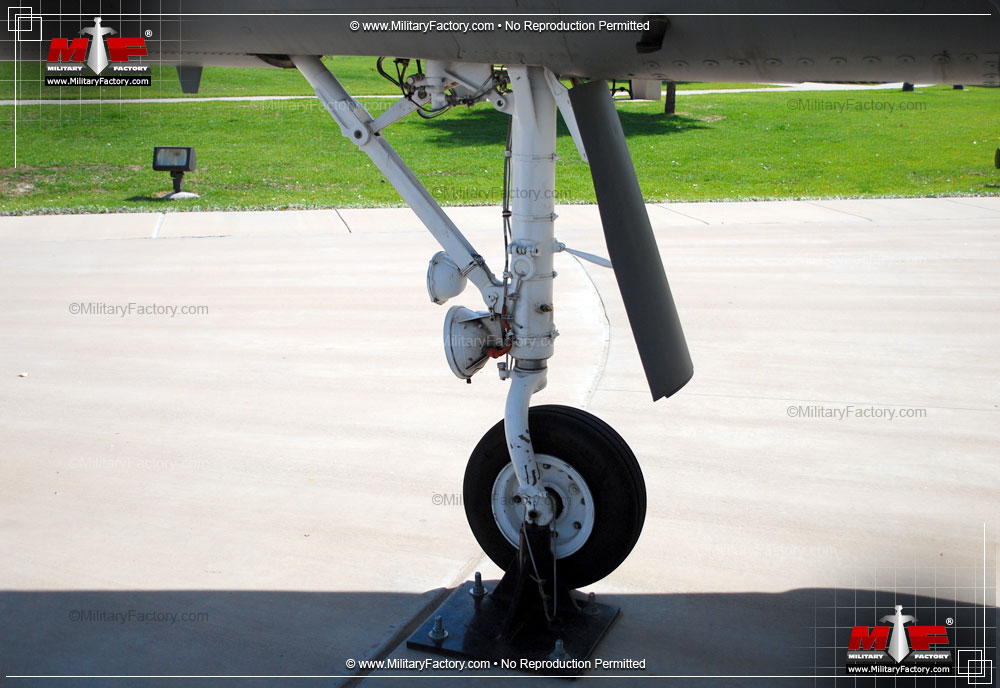 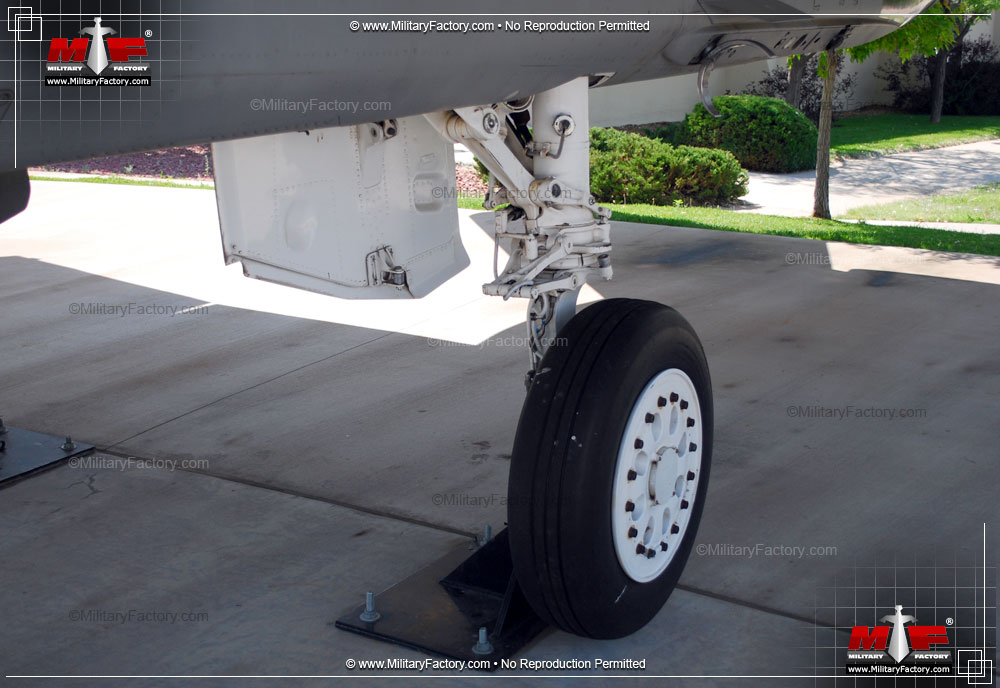 Aviation developments of similar form and function, or related to, the Boeing (McDonnell Douglas) F-15 Eagle...