The Mikoyan-Gurevich MiG-19 Farmer brought with it a critical supersonic fighter jet capability for the Soviet Union when introduced for service in 1955.

Authored By: Staff Writer | Last Edited: 07/08/2022 | Content ©www.MilitaryFactory.com | The following text is exclusive to this site. 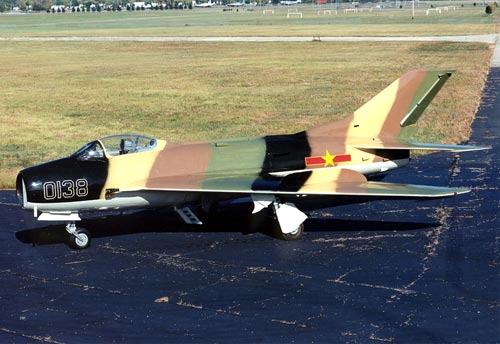 As with most global powers of World War 2 (1939-1945), the Soviet Union forged a bulk of its jet fighter research immediately after the conflict ended. This produced a mixed bag of results as the country sought to meet the threat posed by the West led by Britain and the United States. In time, its various, storied concerns would produce some of the most iconic fighters in history including the "MiG" line of aircraft proliferating the Cold War decades. The MiG-19"Farmer" was a progressive, twin-engined development of the work formed from preceding offerings like the single-engined MiG-15 ""Fagot" and Mig-17 "Fresco".

The Korean War (1950-1953) witnessed the first jet-versus-jet fighter duels in military aviation history and established the Soviet Mikoyan-Gurevich MiG-15 series as one of the best single-seat, single-engine swept-back designs anywhere in the world. The type was exported heavily to Soviet satellite states and allies and production (both locally and foreign) eventually totaled nearly 20,000 units before the end. Success for the MiG-15 was such that its development continued and spawned the equally-successful and popular MiG-17 "Fresco" line of which over 11,000 units followed. This model continued the established form and function of the earlier design but marked a more advanced platform playing to the strengths of the wartime MiG-15 while adding improvements all its own to separate it as an all-new fighter. Though a high-subsonic fighter, the MiG-17 saw considerable success against the stable of American supersonic aircraft featured in the Vietnam War (1955-1975).

Back in 1951 (as the Korean War still raged), Mikoyan-Gurevich began work on another fighter development, this based on a modified MiG-17 becoming the "I-340". Unlike the previous single-engined MiG-15 and MiG-17, this advanced version was to feature paired turbojet engines in a sideby-side arrangement for increased thrust output and improved range and survivability. The engine of choice became the Mikulin AM-5 series turbojets (non-afterburning) which outputted 4,400 thrust each. It was established from the outset that the new design would be a supersonic performer capable of at least Mach 1 straight-line speeds supporting an excellent rate-of-climb - as such serving in both traditional fighter and dedicated interceptor roles.

Because of its origins in the MiG-17, the new aircraft retained the design lines established by the fighter jet. However, its fuselage was heavily revised to incorporate the two engine layout and other changes were forced to suit the revised aerodynamics. There also proved immediate problems with the engine pairing and these were updated to the AM-5A mark of 4,700lb thrust per unit but performance was only deemed adequate so additional work followed perfect the aircraft. This included a lengthening of the fuselage and installation of a new 55-degree sweep wing mainplane of reduced span. The nose section was to house a radar fit so cannon armament was situated at the wing roots (both the MiG-15 and MiG-17 carried their cannon armament in the nose assembly). The changes begat the I-360 prototype of 1952. Since the AM-5A engines continued to disappoint for the supersonic performance required, the AM-5F engine was used instead. Eventually the AM-5B engines took over which were adopted as the Tumansky "RD-9" series in production. Following several more revisions, the finalized MiG-19 prototype made it to the air for the first time on September 18th, 1953. Its design proved promising enough that serial manufacture was ordered soon after and formal service introduction came in March of 1955.

Once in service, the MiG-19 became the first Soviet-built frontline fighter to offer supersonic speeds consistently in level flight. It immediately established itself as a heady performer and made up the bulk of Soviet fighter power heading into the 1960s but stood as an interim design more or less, serving to bridge the end of the MiG-17's reign and mark the arrival of the much more advanced Mach 2-capable MiG-21 "Fishbed" still to follow.

Initial production forms were designated simply as "MiG-19" and were given the NATO codename of "Farmer" in keeping with Soviet fighter names beginning with the letter "F": "Fagot", "Fresco", "Frank" etc... These early forms were armed through 3 x 23mm NR-23 series cannons as standard, fixed armament. The radar-equipped version followed in 1955 as MiG-19P ("Farmer-B") and with it came a revised gun armament of 2 x 23mm NR-23 gun systems. The model also carried the RP-1 "Izumrud" radar fit in the nose and incorporated all-moving tailplanes while seeing a third airbrake unit added at the tail section. Provision was included for carrying and launching rockets and, before the end of its flying days, the variant could rely on K-13 (AA-2 "Atoll") Air-to-Air Missiles (AAMs).

MiG-19PF was another radar-equipped model to serve in the all-weather interception role but production proved limited. MiG-19PG included the "Gorizont-1" series ground control unit and MiG-19PM ("Farmer-E") was a missile-armed (AA-1 "Alkali") interceptor of 1957 which saw its guns completely removed. MiG-19PML was the MiG-19PM with the "Lazur" ground control unit and MiG-19PU was another radar-equipped model supporting rocket pods. The MiG-19PT was a "one-off" version of the MiG-19P outfitted with K-13 missiles and MiG-19R became a dedicated reconnaissance variant of the MiG-19S - its radar replaced with camera equipment and its engines of the RD-9BF-1 turbojet standard.©MilitaryFactory.com
Advertisements

MiG-19S ("Farmer-C") arrived in 1956 with the "Svod" navigation receiver equipment as standard and was armed through 3 x 30mm NR-30 cannons while supporting rocket pods and conventional drop ordnance for light attack functionality. Performance included a maximum speed of 902 miles per hour, a ferry range out to 1,370 miles and a service ceiling up to 58,700 feet. Rate-of-climb was listed at 35,000 feet per minute - making it a useful and deadly interceptor.

MiG-19SF was the MiG-19S with RD-9BF-1 turbojet engines and MiG-19SV, appearing in 1956, was a high-altitude "balloon-busting" development designed to reach up to 70,000 feet. MiG-19SMK were a pair of test aircraft used in evaluating performance of the K-10S series cruise missile and MiG-19SVK was given an all-new wing mainplane design which improved performance slightly - but not enough to warrant full-scale production.

Another high-altitude form to come along was MiG-19SU and this model served to counter the threat posed by the American Lockheed U-2 spyplane. The spyplane was a regular offender above the Soviet Union and, until Soviet air defense missiles and radar could catch up to the high-flying aircraft, interceptors were the call of the day. To allow for quick response times and acceptable time-to-altitude, the MiG-19SU carried rocket boosters for added propulsion. However the design shown too many issues during testing that the effort fell to naught. The Gary Powers U-2 incident of 1960 eventually curtailed American incursions over Soviet airspace - the U-2 aircraft was caught by a SA-2 "Guideline" Surface-to-Air Missile (SAM) system and led to Powers' capture.

By the end of their useful service lives, MiG-19s were expended as target drones under the MiG-19M designaton.

The MiG-19 was also produced under license by several foreign powers. This included Czechoslovakia with its Avia S-105 based largely on the MiG-19S). China produced the MiG-19 as the Shenyang J-6/JJ-6 which marked a single-seat fighter and twin-seat trainer respectively. The J-6 was sold to Pakistan as the "F-6" and updated to carry Western ordnance by customer request. The Nanchang Q-5, another Chinese-originated MiG-19 development, was developed along the lines of a dedicated ground-attack fighter complete with whole nosecone assembly and side-mounted intakes for engine aspiration - about 1,300 of these aircraft were delivered. Poland also opened local lines to strengthen MiG-19 numbers even more, the aircraft serving through both its Air Force and Navy services.

As can be expected, global operators of the MiG-19 proved plenty, ranging from Afghanistan and Albania to Vietnam and Zambia. Total production netted 2,172 examples by Mikoyan-Gurevich alone and more were added through foreign manufacture. The line was beginning to be phased out as soon as the early 1960s for the MiG-21 "Fishbed" was coming online in number. The Fishbed continued the long, storied line of Mikoyan-Gurevich jet-powered fighters that began in the post-World War 2 period and this form numbered 11,496 in total production. Service entry came in 1959 with the MiG-21F model and the line introduced a slew of advancements over its swept-wing predecessors. The MiG-21 retained the nose-mounted intake seen in earlier MiG fighters but installed a shockcone for high-speed, high-performance flight and its fuselage took on a deeper, stouter appearance. Sixty countries went on to deploy it (some continuing to do so today - 2015) and straight-line performance reached Mach 2.0 through its single Tumansky R25 engine with afterburner.

MiG-19s still equip some second-rate air services of the world while other customers have retired (or sold off) their stock in favor of more modern solutions like the MiG-29 "Fulcrum" series or the dependable MiG-21 Fishbed line. In either case, the fighting peak of the MiG-19 is clearly behind it.©MilitaryFactory.com
Note: The above text is EXCLUSIVE to the site www.MilitaryFactory.com. It is the product of many hours of research and work made possible with the help of contributors, veterans, insiders, and topic specialists. If you happen upon this text anywhere else on the internet or in print, please let us know at MilitaryFactory AT gmail DOT com so that we may take appropriate action against the offender / offending site and continue to protect this original work.
Advertisements

(Showcased performance specifications pertain to the Mikoyan-Gurevich MiG-19S production variant. Compare this aircraft entry against any other in our database or View aircraft by powerplant type)
STANDARD:
3 x 30mm NR-30 internal automatic cannons (one mounted at starboard "chin" position, one each at wing roots). 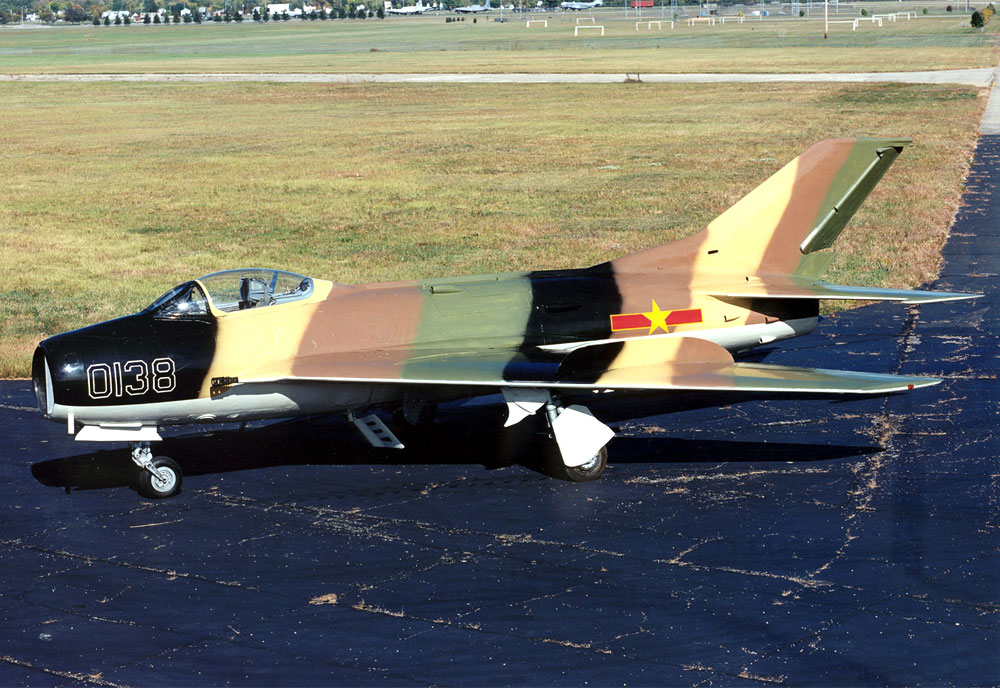 Image from the National Museum of the United States Air Force, Dayton, Ohio.
2 / 5 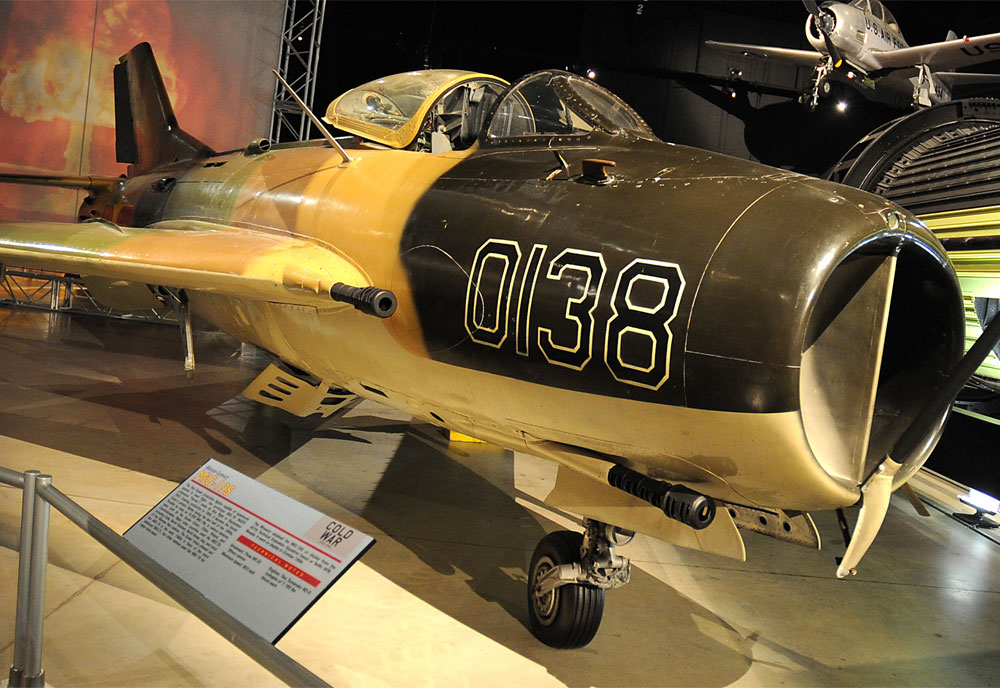 Image from the National Museum of the United States Air Force, Dayton, Ohio.
3 / 5 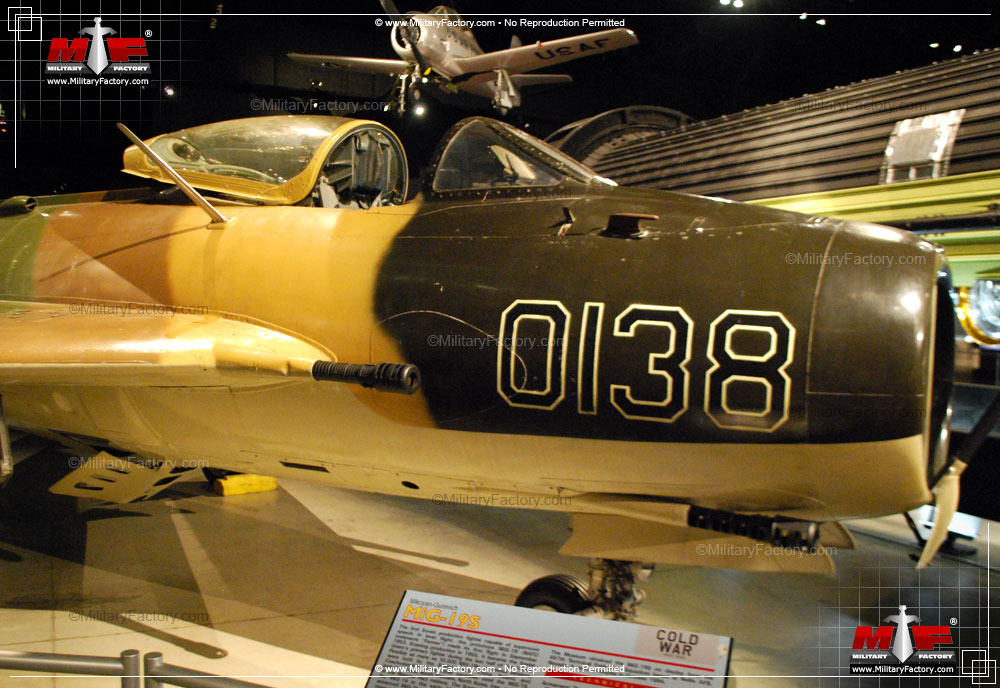 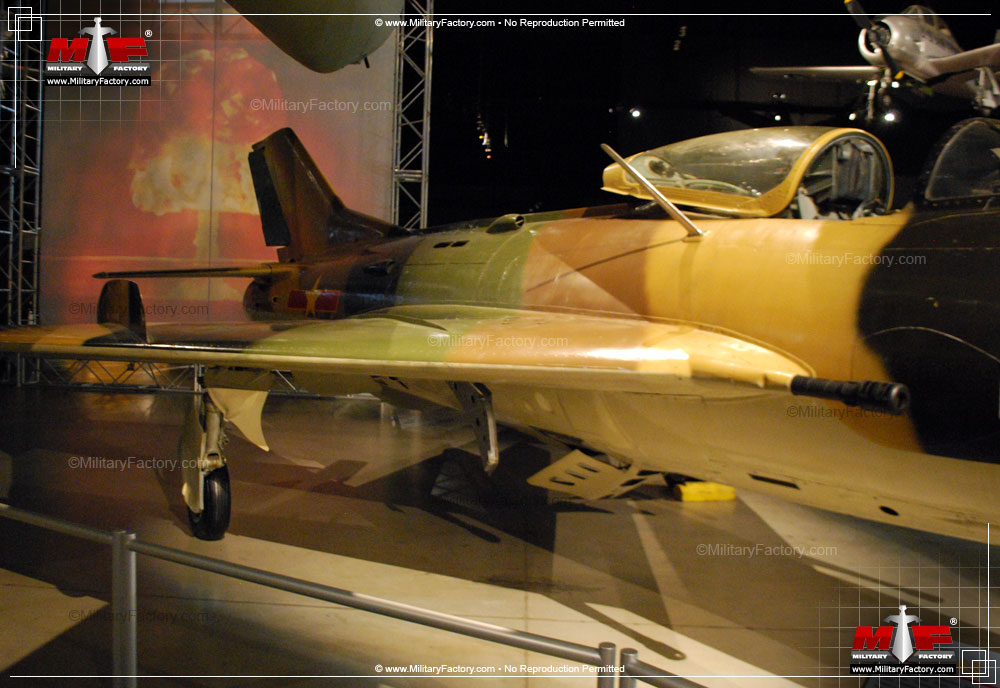 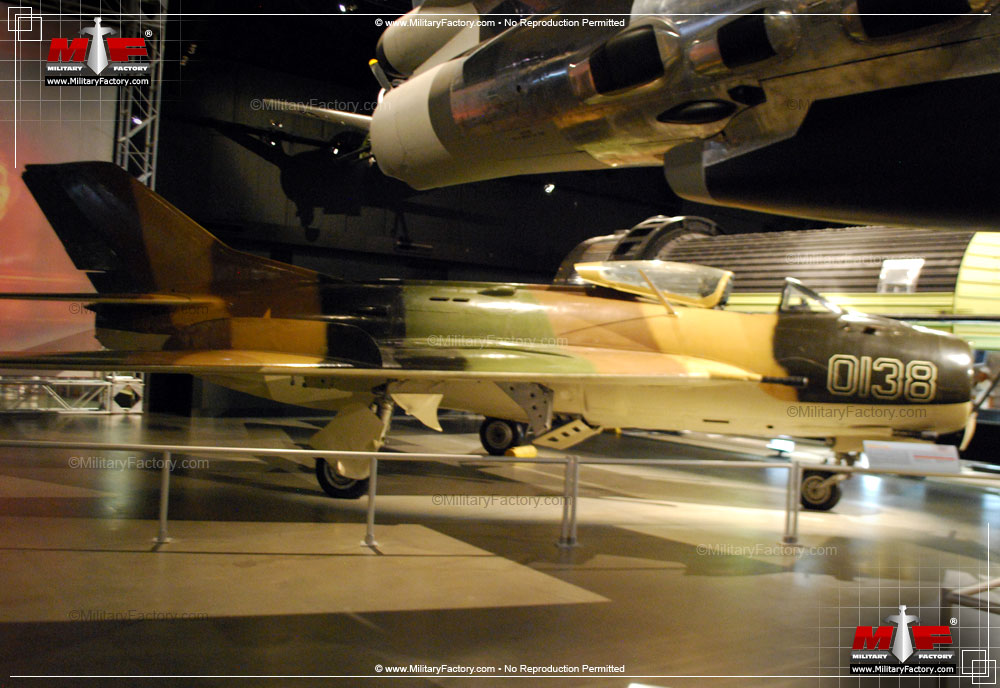 Aviation developments of similar form and function, or related to, the Mikoyan-Gurevich MiG-19 (Farmer)...