The Soviet Mikoyan-Gurevich MiG-17 jet fighter was a major improvement over the classic MiG-15 series.

Authored By: Staff Writer | Last Edited: 07/30/2020 | Content ©www.MilitaryFactory.com | The following text is exclusive to this site. 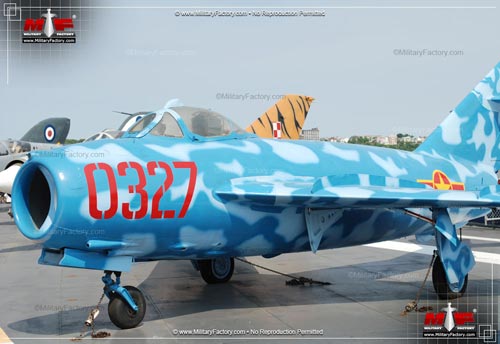 The first air-versus-air duels involving jet fighters centered on the Mikoyan-Gurevich MiG-15 "Fagot" in the East and the North American F-86 "Sabre" in the West. The battles took place in the skies above the Korean Peninsula during the Korean War of 1950-1953 and ushered in a new era of aerial fighting. The arrival of the subsonic MiG-15 came as a nasty surprise to Western observes and quickly ratcheted the war effort which led to an uneasy armistice.

The MiG-15 line was considerably evolved during its time and, as impressive as the later operational versions of it were, there were lingering issues regarding its untapped performance - limited largely by its structure. As such, Mikoyan-Gurevich engineers began work on a successor as soon as 1949 even as the MiG-17 was beginning to reach frontline squadrons in number.

This work led to the follow-up MiG-17 "Fresco", a vastly-improved development based on lessons learned from the former's design. With the MiG-15 representing the pinnacle of research garnered from captured German documents after World War 2, the MiG-17 represented all that there was to recommend the MiG-15 in the first place - with improvements to handling and structure to boot, making the MiG-17 one of the best fighter designs of the Cold War period.

The Fresco was developed through the "I-330" and, despite its resemblance to the earlier MiG-15, the aircraft was essentially an all-new design incorporating lengthened wing mainplanes with increased sweepback and a redesigned tail unit of larger surface area and increased sweep of the horizontal planes - all this was meant to ensure the fighter would surpass the poor high-speed handling qualities that plagued its predecessor which limited top achievable speeds to about Mach 0.92.

The improved aircraft would retain most of the form-and-function of the preceding design but could be identified through subtle physical qualities - mainly the addition of a third boundary layer fence to each wing mainplane. The fighter continued to be powered by a single turbojet engine and sat a single crewmember under a tear drop-style canopy while featuring an all-cannon armament of 1 x 37mm cannon and 2 x 23mm cannons in the nose. Underwing stores allowed for a limited ordnance-carrying capacity in the form of rockets and conventional drop bombs to give the fighter an equally-limited ground-attack capability. Beyond this, the MiG-17 could be easily confused with its earlier incarnation.

The cut-off nature of the nose allowed for unobstructed airflow to the turbojet engine buried within the middle-aft section of the fuselage. This also kept the propulsion scheme in line, reducing the number of bends in the ductwork and allowing the engine to cleanly breath from the front and exhaust under the tail unit. At the heart of the Fresco's design was a further development of the British "Nene" turbojet engine - unlicensed for production in the Soviet Union by Klimov as the "VK-1". As potent as this engine could be, it proved fuel-thirsty even as the new fighter maintained roughly the same fuel-carrying capacity of the MiG-15. This resulted in the MiG-17 being almost constantly fielded with a pair of underwing fuel drop tanks to maintain useful operating ranges.

In its prototype form, the MiG-17 went to the air for the first time on February 1st, 1950 and serial production was ordered as soon as August 1951 (at which point production of MiG-15s was halted). Service introduction then followed in October of 1952.

The MiG-17 was fielded in number with the Soviet Air Force but also shipped beyond Soviet borders in support of allied satellite states and regimes globally - with some owners even taking on local production to strengthen stocks (this proved the case in China, Czechoslovakia, and Poland). Reliable, responsive, and an excellent addition to the MiG line of fighter aircraft, the MiG-17 proposed a new and verifiable threat to the West.

In practice, the MiG-17 was a stable mount at high speeds and, at the time, managed a turning radius better than most of the Western fighters available. Communist-aligned forces would utilize the MiG-17 against the United States during the Vietnam War (1955-1975) to good effect. American efforts there were further frustrated as the US military had begun to steer its aircraft development away from cannon- and machine gun-armed combat aircraft to what they believed was the "future" - homing/guided Air-to-Air Missiles (AAMs). Conversely, the Soviets continued to supply their frontline fighters with standardized fixed cannon armament for close-in fighting. As a result, the tighter-turning MiGs could simply close the distance on American warplanes, rendering the enemy's short- and medium-range missiles ineffective and, in turn, opening the Americans up to a salvo of 37mm and 23mm cannon fire with a high probability of scoring a hit.

Due to the American's poor kill ratio against MiG-17s in the Vietnam Conflict, specimens (ex-Syrian models by way of Israel) were evaluated under secrecy in Nevada in order to develop better doctrine against the nimble fighters.
Advertisements

Communist China not only took the new MiG-17 into service but produced a local variant under the Chengdu brand label as the "J-5/JJ-5" - designating single-seat fighter and two-seat trainer variants, respectively. While the Soviet Air Force believed their MiG-15UTI twin-seaters were still more than adequate as fighter trainers, China produced the only two-seat form trainer form of the MiG-17 through the JJ-5. These featured two individual cockpits for student and instructor and had a slightly lengthened fuselage. A first-flight of a JJ-5 prototype was recorded on May 8th, 1966 after which some 1,060 were built into the mid-1980s. Its export designation became "FT-5".

The MiG-17 often stands as a mid-level design bridging the gap between the classic MiG-15 of the post-World War 2/Korean War-era and the more-powerful MiG-19. However, this improved single-seat, jet-powered fighter more than held its own for its time in the air and history would show that the powers of the East were quite capable of producing fighters able to match or exceed the capabilities of even the most technological-centric, supersonic, missile-laden designs of the West. In the end, the MiG-17 would go down as a classic war bird of the Cold War period, having forged its own enviable history through combat service, excellent export numbers and local production initiatives, and career longevity that eventually made up its long term success.

Variants of the line began with the I-300 developmental model and this inevitably led to the initial "Fresco-A" production fighter powered by the original VK-1 engine. From this was forged the MiG-17A which was given the enhanced lifespan VK-1A turbojet engine. The MiG-17AS was a "multirole" conversion of A-models developed to carry air-to-air missiles as well as unguided rockets. The MiG-17P ("Fresco-B") introduced an all-weather capability due to its inclusion of the "Izumrud" radar system.

The definitive MiG-17F ("Fresco-C") switched to the VK-1F turbojet engine which held an afterburning/reheat capability for short bursts of speed and, therefore, improved performance in level flight. Its engine outputted 6,000lb of thrust (dry) and could increase to 7,600lb of thrust with reheat engaged, propelling the fighter to speeds of 685 miles-per-hour up to an altitude of 55,000 feet. Rate-of-climb was 12,800 feet-per-minute which made the MiG-17 a suitable interceptor.

The MiG-17PF ("Fresco-D") was another all-weather, radar-equipped form now powered by the VK-1F turbojet engine and having a fixed armament of 3 x 23mm NR-23 autocannons in the nose. The MIG-17PM/PFU ("Fresco-E") was also radar-equipped and was cleared to carry the AA-1 "Alkali" (K-5) air-to-air-missile. The MiG-17R was a converted dedicated reconnaissance platform equipped with cameras and powered by the VK-1F turbojet engine.

The MiG-17SN was a development of the Fresco with a completely rearranged intake system - the cut-off nose now seating the 23mm autocannons in a "trainable" housing and the turbojet aspirated through side-fuselage intakes. This novel aircraft was not furthered into a production-quality form.

Despite its age, the MiG-17 continues to serve in a limited capacity. Total production reached 10,649 with around 8,000 units produced in the Soviet Union and numbers strengthened by manufacture in China, Czechoslovakia (as the "S-104"), and Poland (as the "Lim-6").

While nearly all MiG-17 operators have moved on from the type, some operators remain in Guinea-Bissau, Madagascar, and Somalia (2019).
Advertisements

OPTIONAL:
Maximum external weapons load of up to 1,105lb (500kg) across two underwing hardpoints (one per wing member) consisting of any of the following: 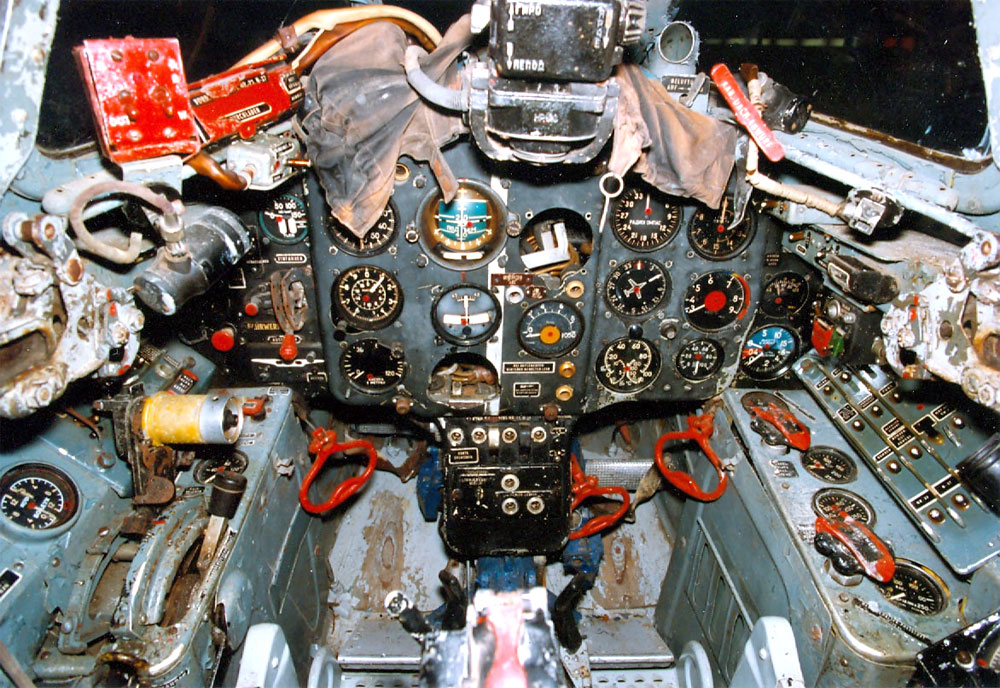 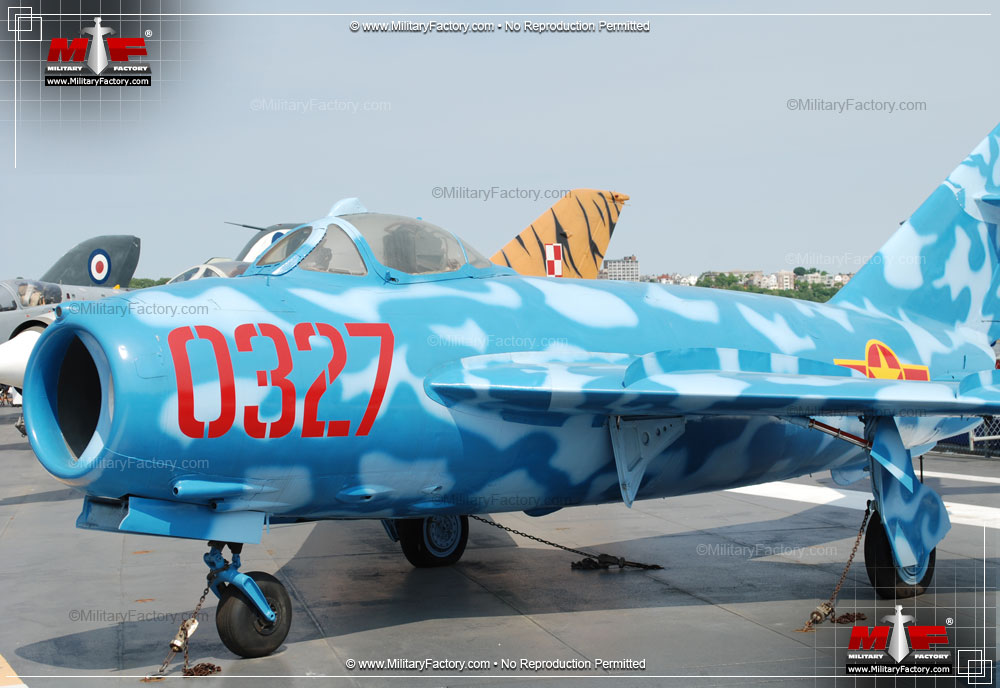 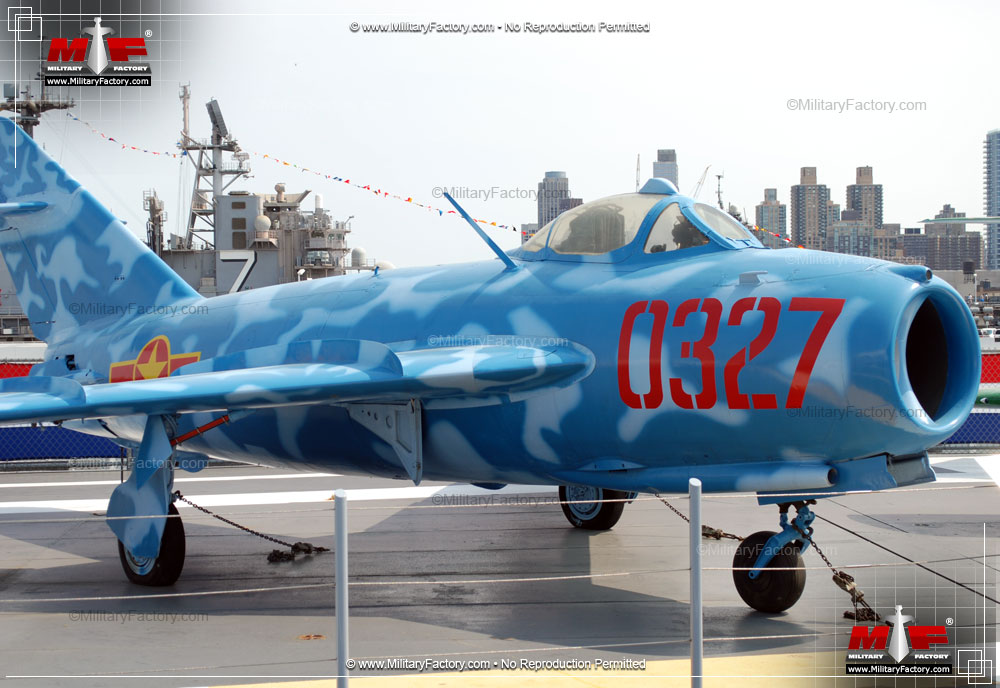 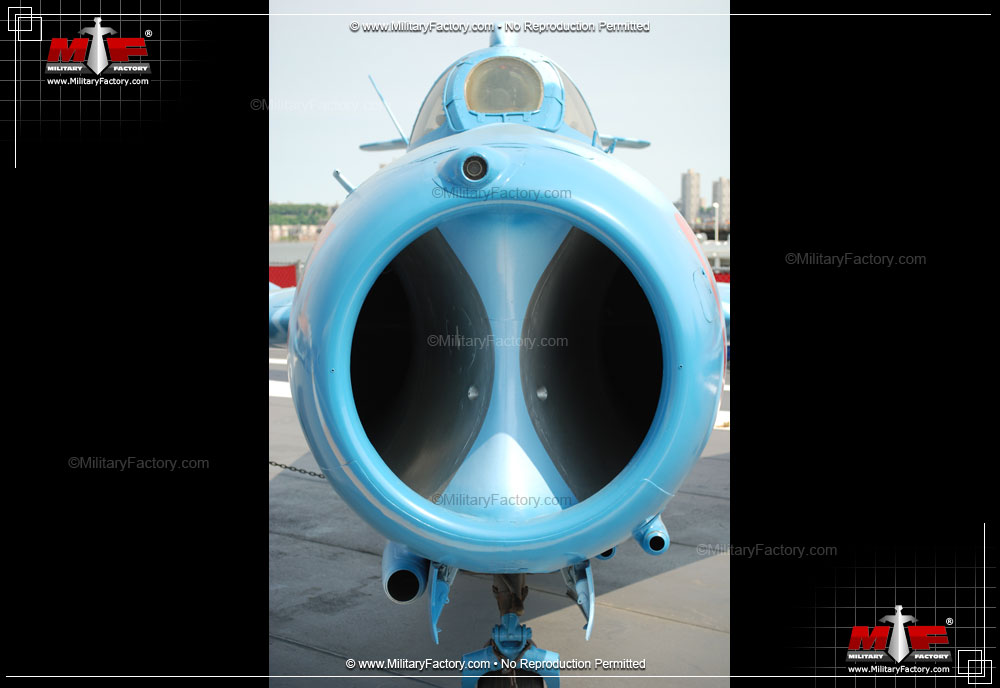 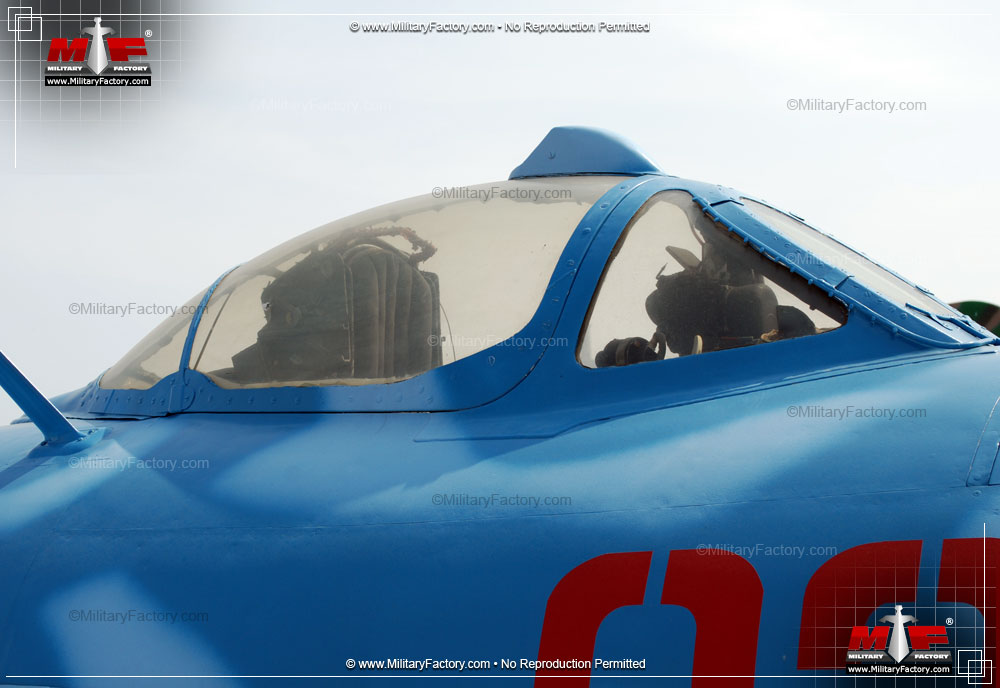 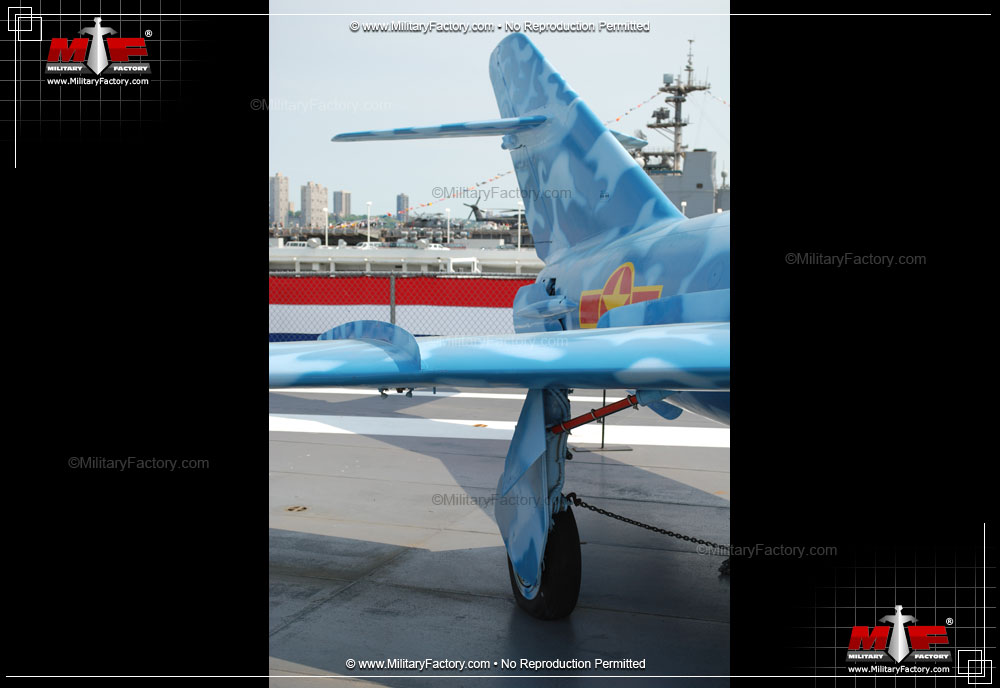 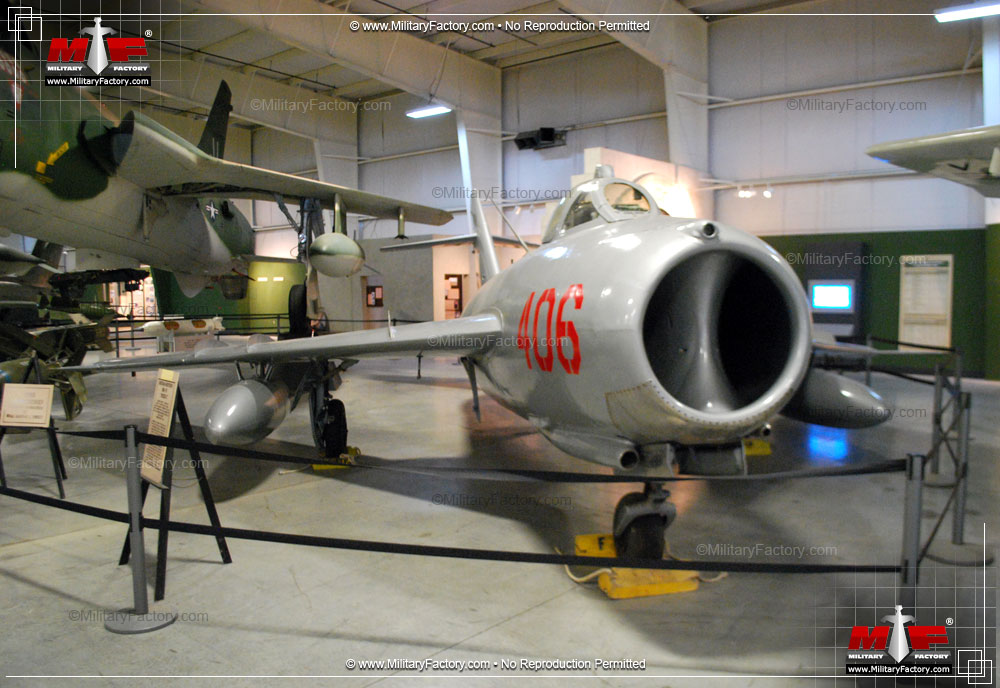 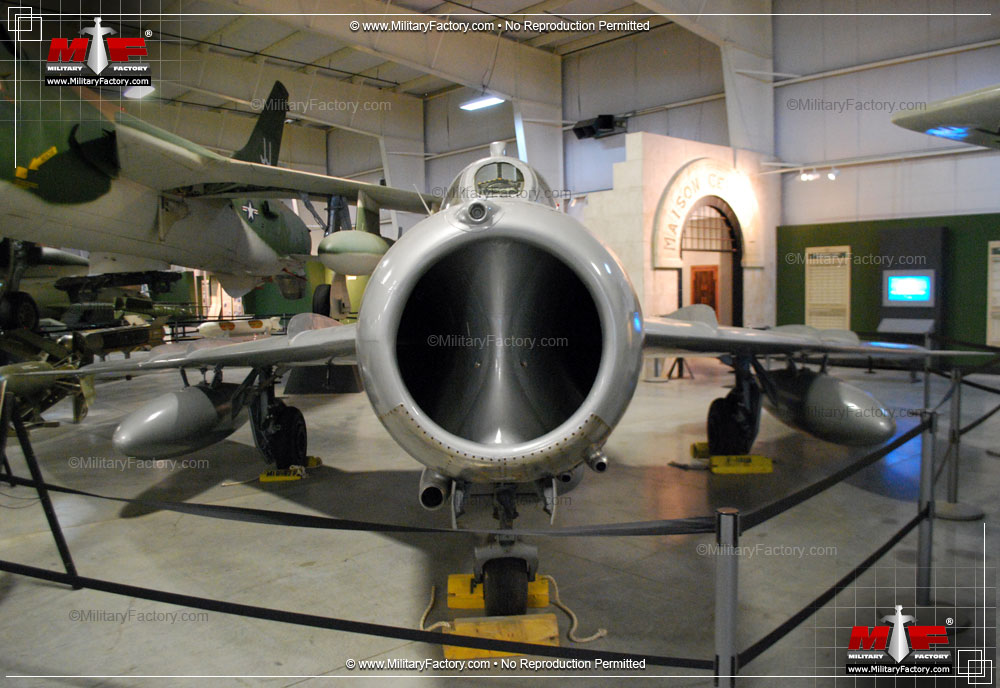 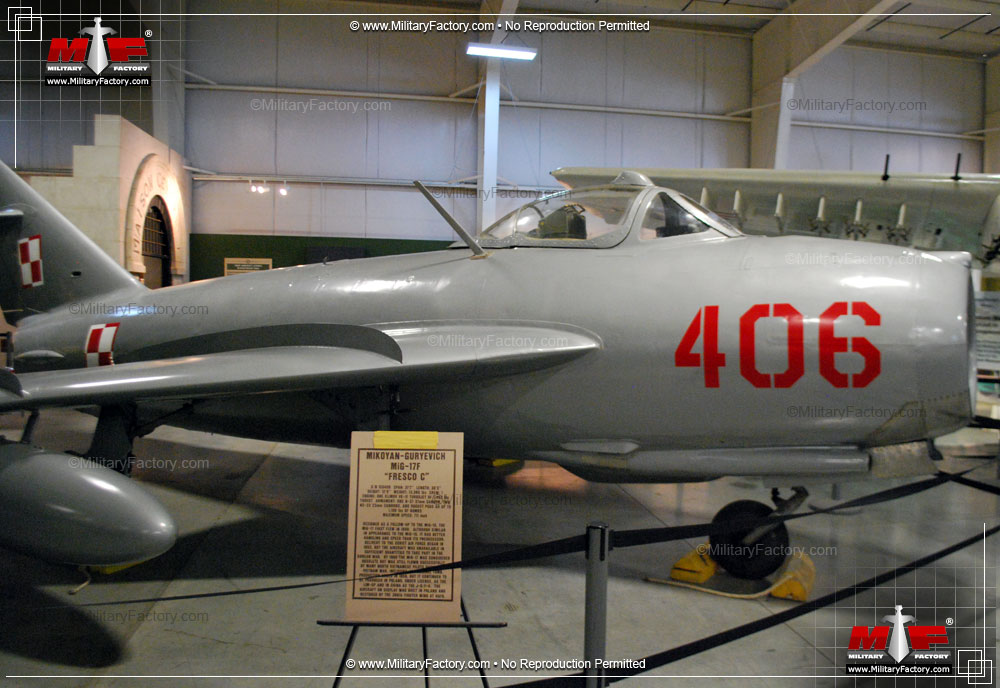 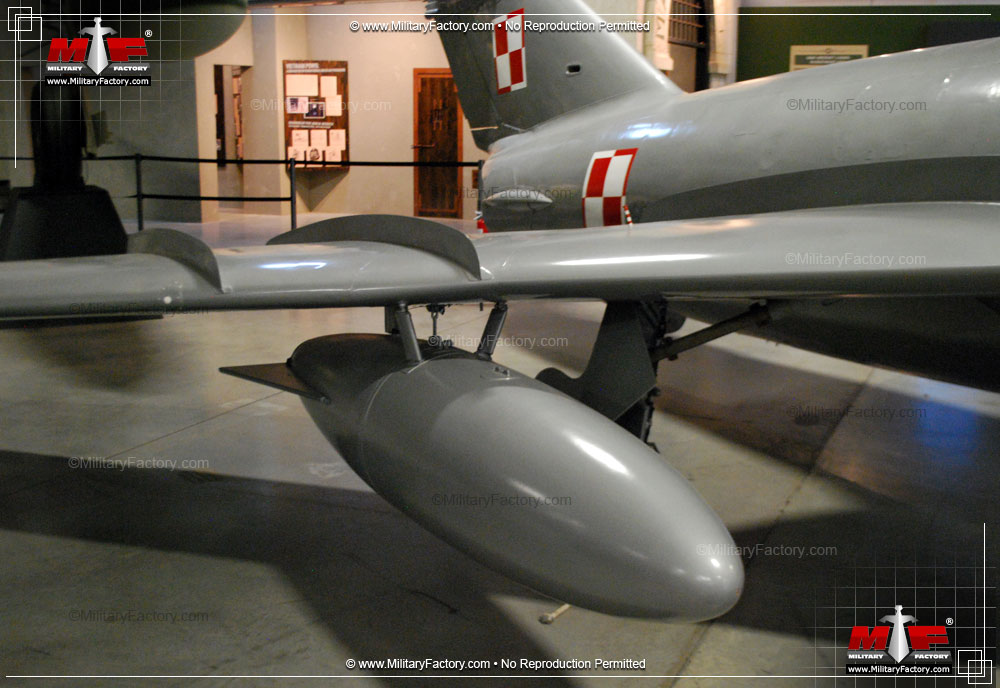 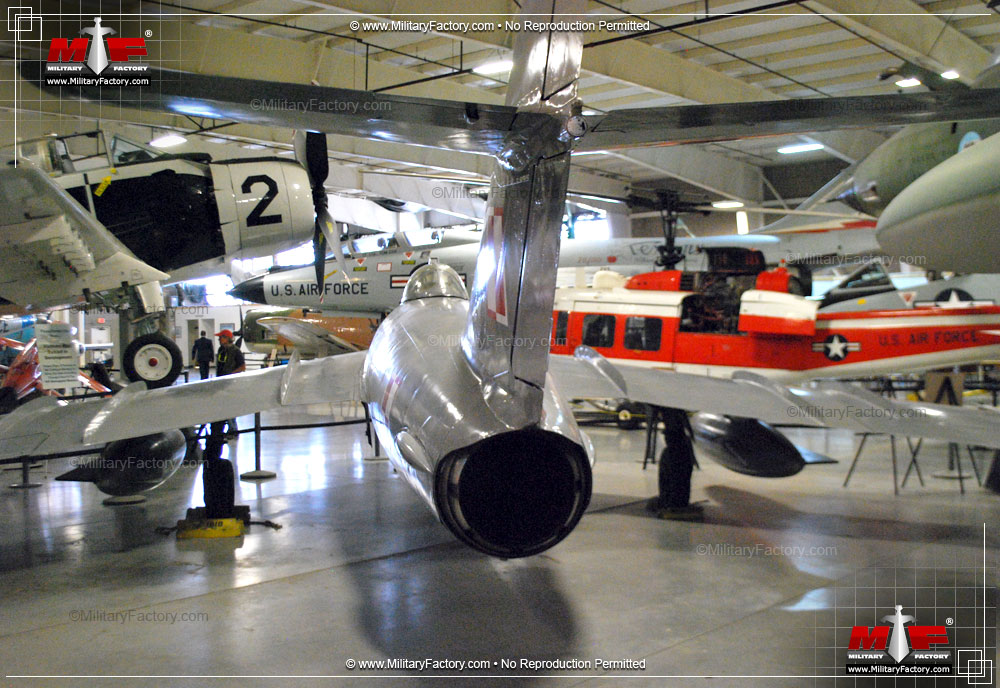 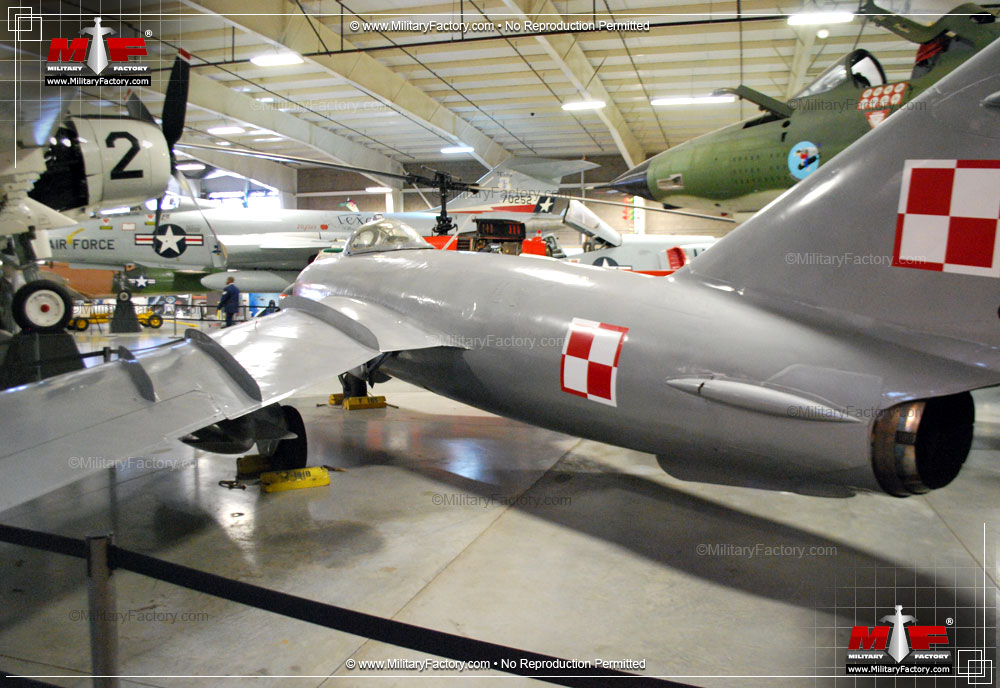 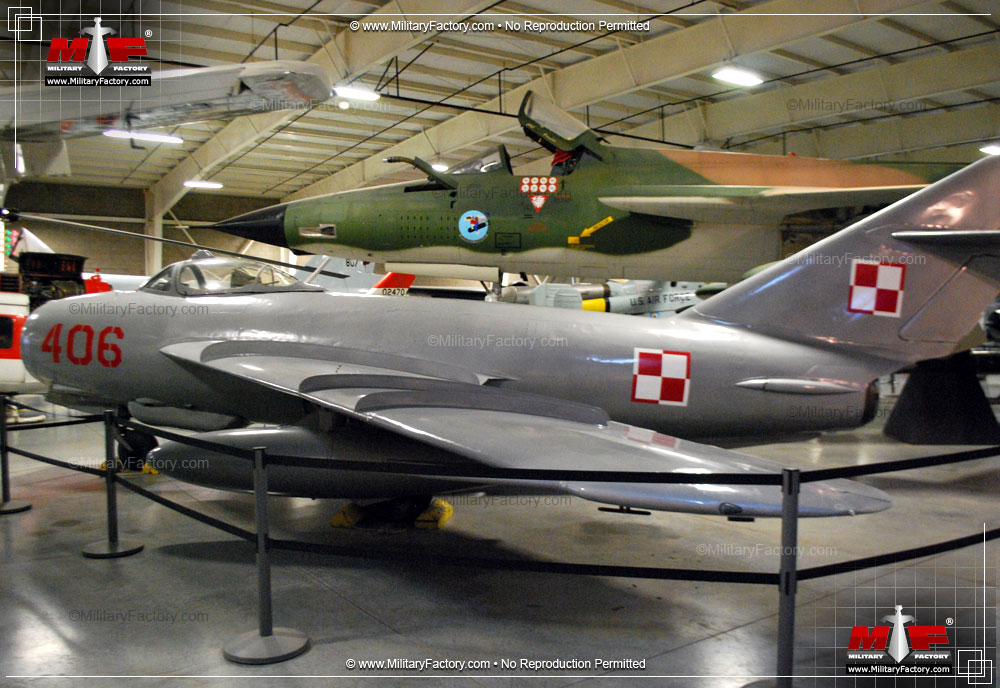 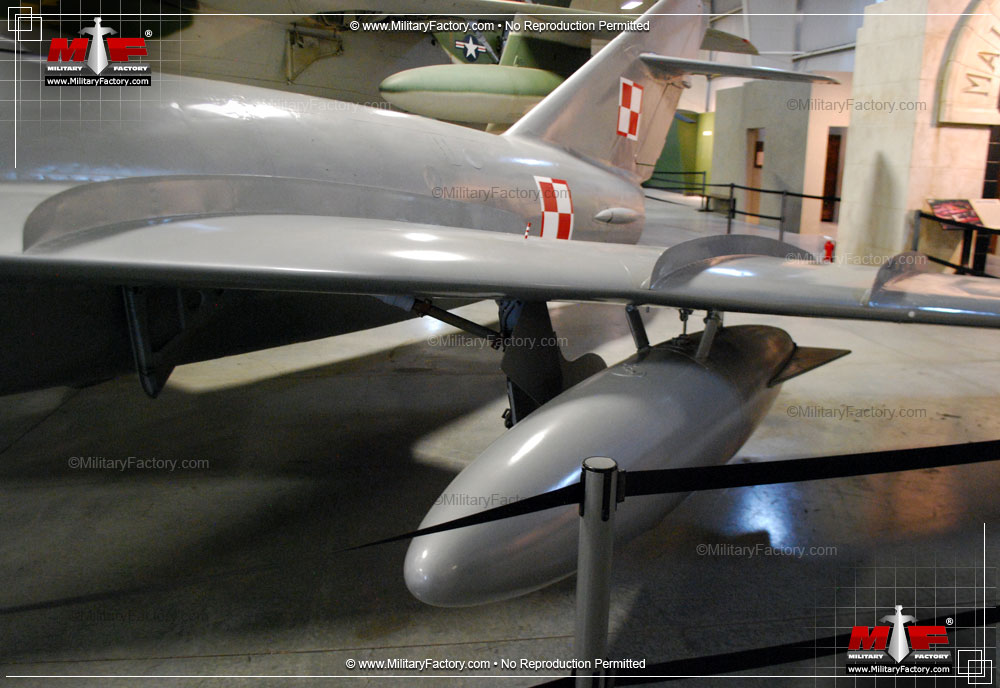 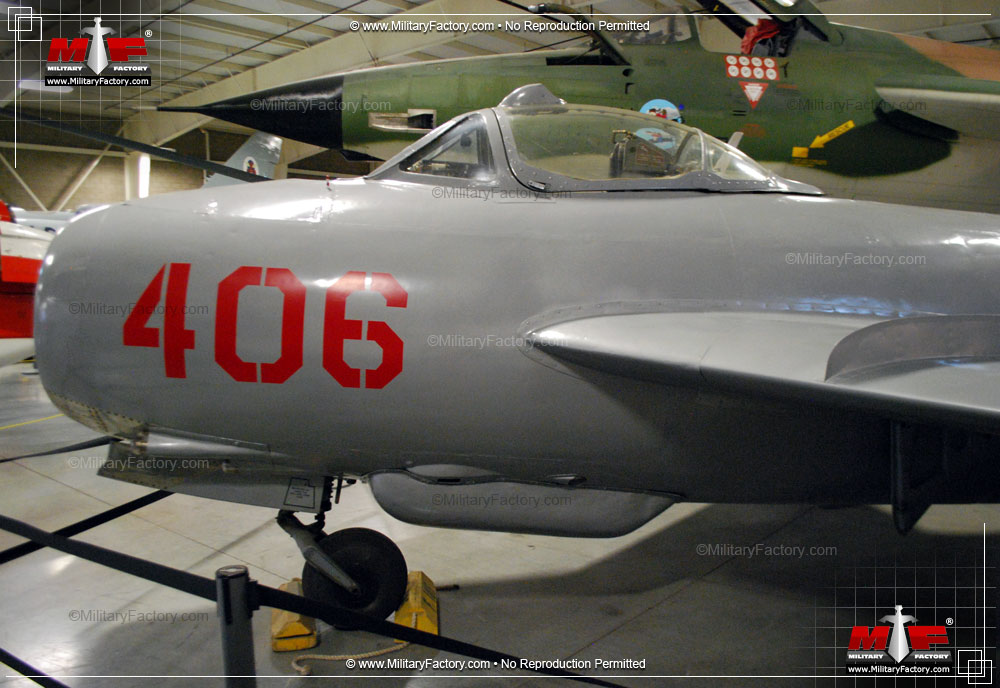 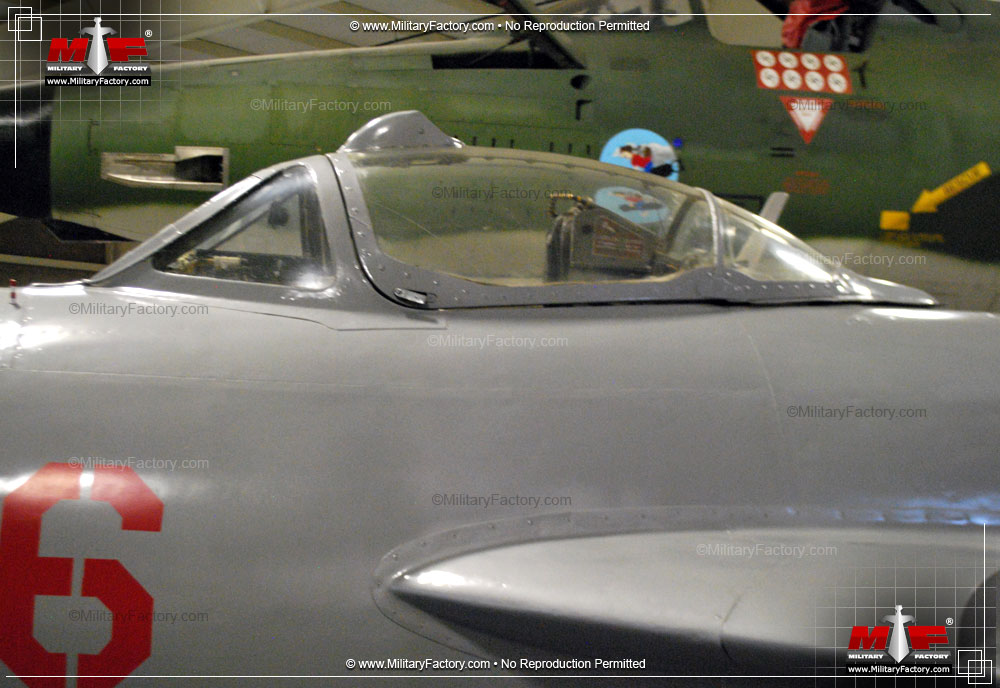 Aviation developments of similar form and function, or related to, the Mikoyan-Gurevich MiG-17 (Fresco)...