Use of the Soviet-era Mil Mi-8 Hip helicopter has been worldwide with the type being utilized through many military and civilian guises.

Authored By: Staff Writer | Last Edited: 02/28/2022 | Content ©www.MilitaryFactory.com | The following text is exclusive to this site. 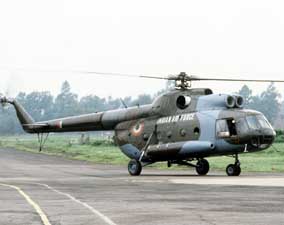 Numbering well over 12,000 production examples, the Mil Mi-8 (NATO reporting name of "Hip") can be viewed as one of the most successful helicopter designs of all time. It has seen use as a passenger transport, troop transport, vip transport, reconnaissance, electronic warfare, assault, artillery spotter and airborne command post throughout its tenure with the various nations that have purchased the aircraft. Even today, the Mi-8 remains in use as an operational-level instrument in many of the air forces and army groups that have seen value in the type. As of this writing, production continues despite some 42 years since the first Mi-8 rolled off of the assembly lines at the Mil Moscow Helicopter Plant - then under the Soviet banner.

The Mi-8 was developed as a replacement for the Mi-4 "Hound", a piston-engined transport helicopter appearing in 1953 that could seat up to fourteen personnel. Utilizing some of the successful internal workings of the Mi-4, the new Mil design featured a single Soloviev turboshaft engine of 2,700 shaft horsepower mated to an all-new enlarged fuselage. The prototype took on the name of Mi-8 ("Hip-A") and achieved first flight on July 9th, 1961. Follow-up developmental testing soon revealed the design to lack in power and, as such, the single engine idea was dropped in favor of a twin-engined design featuring two Isotov TV2 turboshaft engines. A five-blade main rotor was also used in this revision which produced the second prototype, first flying on September 17th, 1962. Minor revisions followed and the Mi-8 was fully introduced in Soviet Air Force service sometime in 1967. The initial production versions all fell under the NATO designation of "Hip-C" and constituted the base militarized model and a civilian model (noted for its square windows instead of round). Since then, the Hip series has been expanded to include a plethora of upgraded and specially-designed versions.

Externally, the Mi-8 maintains a most utilitarian look about her. She sports a low-slung front crew area with extensive glazing that offers up excellent views from the cockpit. Immediately to the cockpit's rear is the spacious crew cabin with side-mounted sliding doors. On most versions, the tricycle undercarriage is static (one such Hip offered a retractable undercarriage) which adds to the types distinct look. Two engines are mounted above and to the rear of the crew cabin area and power a large five-blade main rotor system. The empennage is also a distinct feature of this rotorcraft as it sits high in the design and sports a single vertical tail fin, horizontal plane and a three-blade tail rotor mounted to the starboard side (the similar Mi-17 mounts the tail rotor to port). A modified Hip system features a rear-loading ramp. The crew consists of a pilot, co-pilot and a loadmaster.
Advertisements

Performance specifications of the common Mil Mi-8T "Hip-C" model are provided for by the twin Klimov-brand TV3-117Mt turboshaft engines generating up to 1,950 shaft horsepower each. Speeds top off at 260 kilometers per hour while a maximum range of 280 miles is possible. A ferry range of 596 miles is noted as is a service ceiling of 14,765 feet.

When armed, the Hip can sport a variety of mission-specific munitions. This includes the use of anti-tank missiles on outrigger pylons, rocket pods and even drop bombs. Self-defense can be handled by a side-mounted PK machine gun or equivalent. One particular Hip model mounted a 12.7mm machine gun in the nose for increased lethality. With the Hip being a multi-role type helicopter system capable of up to 3,300lbs of armament, it can mount virtually any approved ordnance package that the operator needs for a particular mission.

Operators of the Mi-8 cover the world over and appear in both militarized and civilian guises. Prominent military operators include Russia, Afghanistan, Armenia, Azerbaijan, Turkey, Bangladesh, Bulgaria, Croatia, the Czech Republic, Ethiopia, Georgia, Hungary, India, Iran and Serbia. Notable operators also include the United States, which featured the type with their 6th Special Operations Squadron for training purposes. The American-based contracting group, Blackwater USA, used the type as well.

Anyway one looks at it, the expansive reach of this system has ensured an excellent legacy for the machine. Despite newer and more technologically advanced systems since the inception of the Mi-8, the Hip continues to serve in many frontline units across the globe. It is expected that the helicopter will continued to do so for many more years to come.

December 2014 - The newest incarnation of the Mi-8 is in flight-testing as the Mi-171A2. This product features an all-glass cockpit, new rotors, and digitally-controlled Klimov VK2500PS-03 turboshaft engines of 2,400 shaft horsepower each. Avionics are by Radio-Electronic Technologies (KBO-17 series). A follow-up (second) prototype is also in the works.

July 2017 - Debuted at MAKS 2017 was the Mi-8AMTSh-VA production variant for Arctic environment service.

August 2020 - An improved version of the Mi-8AMT(Sh)-VN helicopter, the Mi-171Sh "Strom", was displayed at Army2020. Russian special forces are the prime early candidate for this mark.

(Showcased performance specifications pertain to the Mil-Mi-8T (Hip-C) production variant. Compare this aircraft entry against any other in our database or View aircraft by powerplant type)
Up to 6 x Hardpoints for rocket pods, anti-tank missiles and bombs. Ordnance can include a combination of the following: 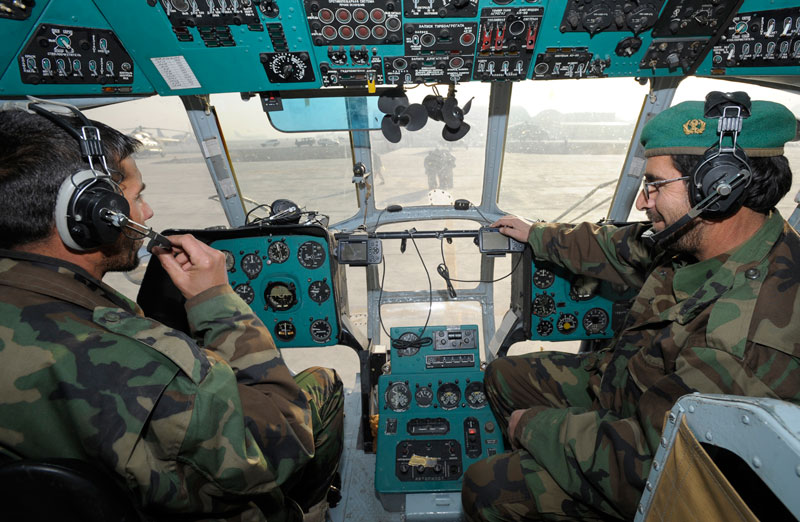 General Assessment
Firepower
Performance
Survivability
Versatility
Impact
Values are derrived from a variety of categories related to the design, overall function, and historical influence of this aircraft in aviation history.
Overall Rating
The overall rating takes into account over 60 individual factors related to this aircraft entry.
86
Rating is out of a possible 100 points.
Firepower Index (BETA) 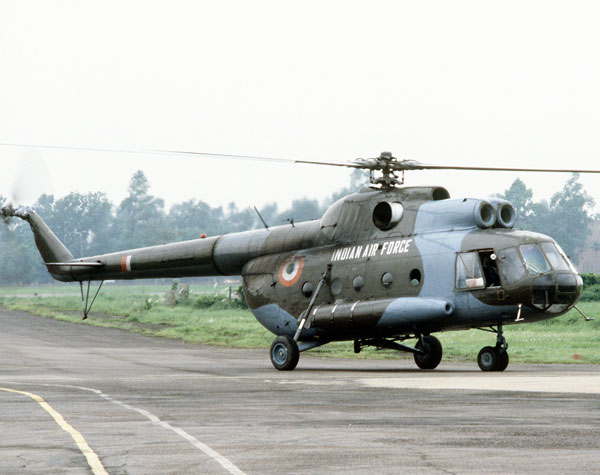 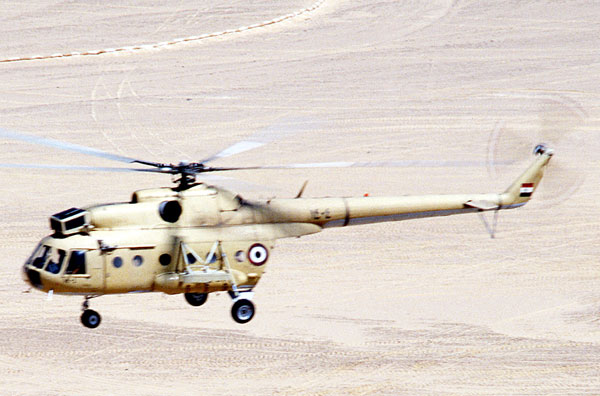 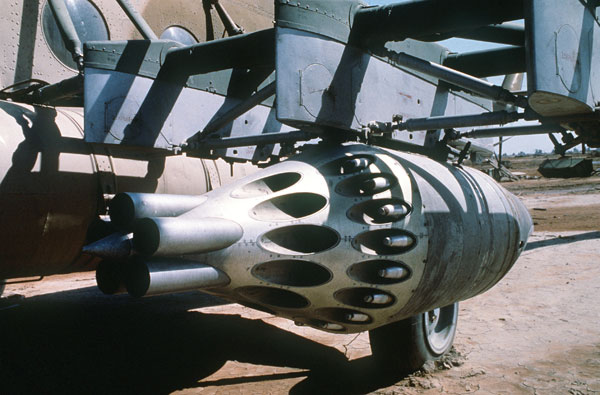 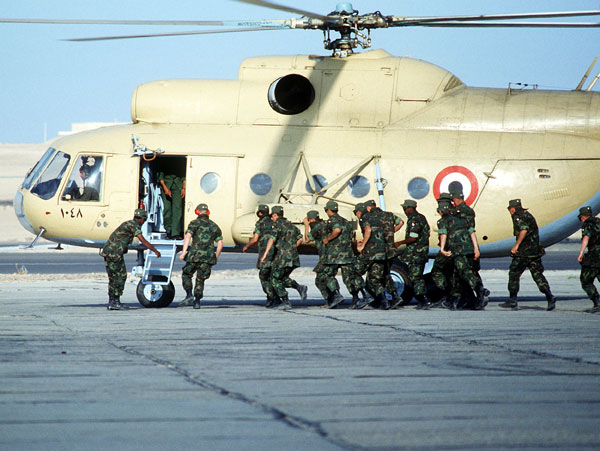 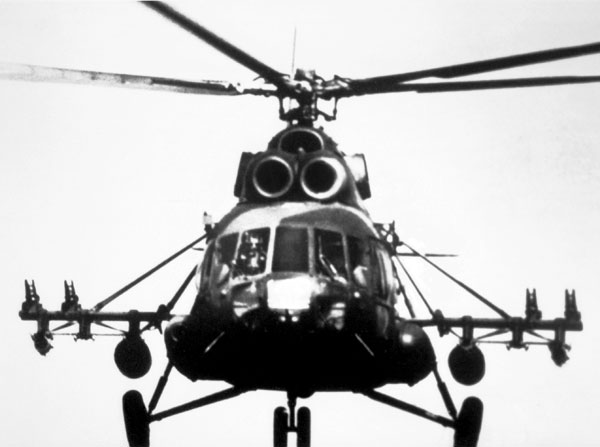 Aviation developments of similar form and function, or related to, the Mil Mi-8 (Hip)...