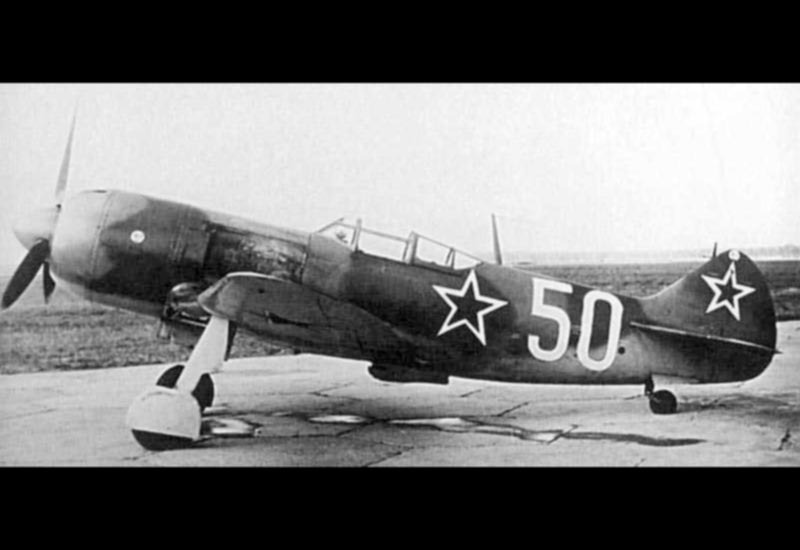 The Lavochkin La-7 prop-powered fighter appeared as an improved La-5 in the later years of World War 2.

The Lavochkin La-7 was an improved variant of the preceding La-5 form. It incorporated a new Shvetsov engine, uprated to increased the mount's maximum speed though, on the whole, it remained largely the same aircraft with a new designation. Other subtle changes were incorporated based on combat actions with the La-7 and first flight of a modified prototype was in February of 1944. Service entry then followed rather quickly in September of 1944. The La-7 led a relatively short operational service life though, being retired during 1950 - the jet age now taking hold. Production of La-7 fighters numbered 5,753 units.

As completed, the La-7 sported similar lines to the original La-5. The cockpit was heavily framed and situated at amidships. The mainplanes were set under and ahead of the cockpit floor. The engine was shrouded over in a rounded cowling with a large spinner capping the three-bladed propeller unit. The tail was tapered and formed the curved vertical fin which mounted mid-set tailplanes on either side. The fuselage spine was only slightly raised to degrade vision to the rear but required for the internal volume it allowed engineers. The undercarriage remained a tail-dragger arrangement with two main legs and a tailwheel - all retractable.

Power was through a single Shvetsov ASh-82FN 14-cylinder air-cooled radial piston engine of 1,650 horsepower. This drove a three-bladed VISh-105V-4 series propeller blade assembly at front. Maximum speed reached 411 miles per hour of late-war models and ranges out to 415 miles. Service ceiling was 34,300 feet and rate-of-climb a strong 3,095 feet-per-minute.

Standard armament began as 2 x 20mm ShVAK cannons with 200 rounds afforded each gun. This could be substituted with 3 x 20mm Berezin B-20 series cannons with 100 rounds per gun. As with the La-5 before it, the La-7 retained performance qualities in the low-to-medium altitude range which meant it a stable platform for the fighter-bomber role as well as a fighter. For this role, the La-7 could also be outfitted with air-to-surface rockets and up to 440lbs of conventional drop ordnance.

Beyond the Soviet Air Force, the La-7 was only utilized by the Czechoslovakian Air Force.

The only definitive production variant became the La-7UTI which served as a trainer model. This incorporated a second seat for the instructor at the expense of internal volume. 584 of the type were produced into 1947. Other one-off variants included the La-7TK used in testing a turbosupercharger development and the La-7R to test a rocket motor propulsion system. The La-7PVRD was similar in scope and used in testing of a pair of ramjet installations under the wings. Another one-off model became the La-7/M-71 which fitted a Shvetsov M-71 engine during 1944.

Czechoslovakia; Soviet Union
(OPERATORS list includes past, present, and future operators when applicable)
✓ Air-to-Air Combat, Fighter
General ability to actively engage other aircraft of similar form and function, typically through guns, missiles, and/or aerial rockets. ✓ Ground Attack (Bombing, Strafing)
Ability to conduct aerial bombing of ground targets by way of (but not limited to) guns, bombs, missiles, rockets, and the like. ✓ Close-Air Support (CAS)
Developed to operate in close proximity to active ground elements by way of a broad array of air-to-ground ordnance and munitions options.

(Showcased performance specifications pertain to the base Lavochkin La-7 production variant. Compare this aircraft entry against any other in our database. View aircraft by powerplant type)
STANDARD:
2 x 20mm ShVAK cannons OR 3 x 20mm Berezin B-20 cannons.

OPTIONAL:
Up to 440lbs of external ordnance including rockets and conventional drop bombs.

Aviation developments of similar form and function, or related to, the Lavochkin La-7...