The Lavochkin La-5 series was fielded in great quantities after its introduction, taking part in some of the great air battles over the East Front during World War 2.

Authored By: Staff Writer | Last Edited: 07/30/2020 | Content ©www.MilitaryFactory.com | The following text is exclusive to this site. 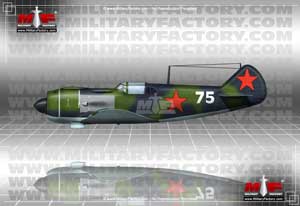 Design of the Lavochkin La-5 series of low-to-medium altitude, prop-driven fighter was spurred on by a need by the Soviet Air Force for a weapon capable of matching, or exceeding, anything the German Luftwaffe was fielding at the time. The Soviets initially reeled from the German invasion of June 1941 to begin the East front and this period placed a focus on the ill-equipped and ill-trained Soviet military against the now-perfected Blitzkrieg. Soviet aircraft designers and production facilities were just starting to get involved in the mass war effort needed to combat the Third Reich and the La-5 joined the Soviet Air Force inventory as an improved form of the early-war, underpowered LaGG-3 of 1940, itself a lighter and improved form of the original (though unsuccessful) LaGG-1, also of 1940. The La-5 series of aircraft was a step in the right direction, appearing in production form almost as soon as it had appeared as a prototype, with the Soviets in the general school of thought that "any aircraft was better than none". Fortunately for the Soviet Air Force - and the Soviet Union for that matter - the La-5 proved to be a versatile, robust, heavy-hitter capable of matching the Luftwaffe fighters pound-for-pound. By the end of the war, the La-5 registered 9,920 production examples. It was introduced in July of 1942.

The design approach to the La-5 was quite different to Lavochkin's previous attemptat it featured a cut-down rear fuselage with the cockpit positioned amidships. The wings were low-mounted under the fuselage and set forward of the cockpit. The fuselage was of a tubular design approach with a shallow vertical tail gin at rear and rounded engine cowling at front. The forward design of the aircraft was dominated by the noticeable propeller hub which would go on to become the consistent design element of Lavochkin aircraft during and after the war. Armament consisted of 2 x 20mm cannons mounted in the nose - this just after the propeller unit and embedded into the over-sized engine cowling.

The La-5 reached "definitive" status in its production run through the La-5FN variant featuring an uprated engine and provision for rocket launching. Power was through a Shvetsov ASh-82FN radial piston engine developing 1,850 horsepower. Dimensions of the aircraft included a running length of 8.7 meters, a height of 2.5 meters and a wingspan of 9.8 meters. Empty weight was 5,645lb with a Maximum Take-Off Weight nearing 7,500lb. Performance included a maximum speed of 405 miles per hour, a range out to 475 miles, and a service ceiling up to 36,100 feet. Rate-of-climb was a handy 3,280 feet per minute. Beyond its 20mm armament and rocket-firing capabilities, the La-5 also adopted a fighter-bomber role in carrying 2 x 220lb drop bombs underwing. The 20mm armament was also upgraded to 23mm NS cannons in later production models.

A two-seat trainer version of the La-5 arrived later as the La-5UTI.

Operators beyond the Soviet Air Force included Czechoslovakia, Mongolia, and Poland. The Poland Air Force operated only one example.

The Lavochkin La-7 was an improved direct offshoot of the La-5 appearing in September of 1944 and seeing production reach 5,753 units.
Advertisements

Czechoslovakia; Mongolia; Poland; Soviet Union
(OPERATORS list includes past, present, and future operators when applicable)
✓ Air-to-Air Combat, Fighter
General ability to actively engage other aircraft of similar form and function, typically through guns, missiles, and/or aerial rockets. ✓ Interception
Ability to intercept inbound aerial threats by way of high-performance, typically speed and rate-of-climb. ✓ Close-Air Support (CAS)
Developed to operate in close proximity to active ground elements by way of a broad array of air-to-ground ordnance and munitions options. ✓ Training (General)
Developed ability to be used as a dedicated trainer for student pilots (typically under the supervision of an instructor). 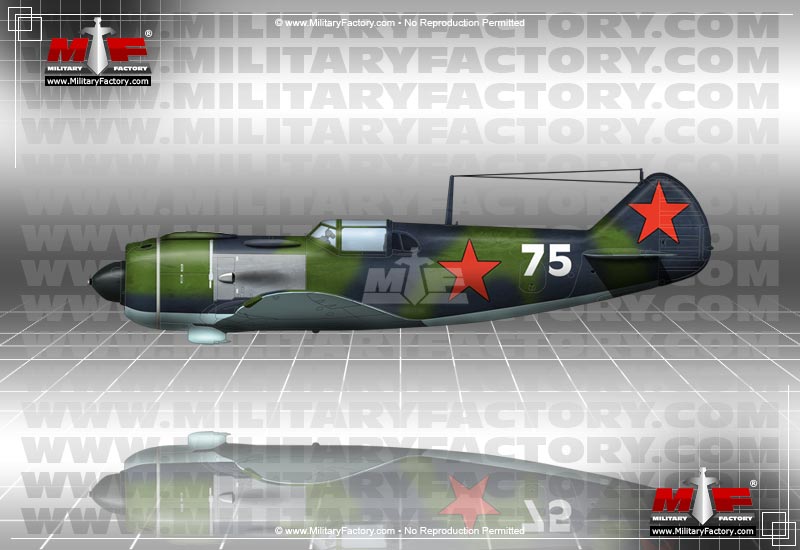 Aviation developments of similar form and function, or related to, the Lavochkin La-5...