The LTV A-7 Cosair II strike platform was developed as a replacement for the Douglas A-4 Skyhawk line and based on the successful Vought F-8 Crusader fighter.

Authored By: Staff Writer | Last Edited: 02/03/2022 | Content ©www.MilitaryFactory.com | The following text is exclusive to this site. 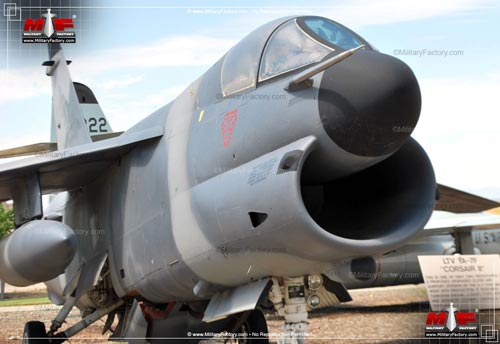 Developed as a successor to the Douglas A-4 "Skyhawk" series of carrier-based strike fighter, the LTV A-7 "Corsair II" entered service with the United States Navy (USN) during the Vietnam War (1955-1975) in 1967. Some 1,569 examples were ultimately produced and operated by the United States, Greece (Hellenic), Portugal, and Thailand. The last operational versions were retired (with the Hellenic Air Force) as recently as 2014 while American use was given up following the Gulf War in 1993.

Origins of the A-7 reside back in a 1962 USN initiative which produced the VAX ("Heavier-than-Air, Attack, Experimental") program seeking a follow-up design to the aging A-4 platform. A budget-conscious approach was selected in which an existing airframe was to serve as the basis for the new aircraft. This would also expedite development and ultimate serial production of the strike fighter. Key industry powerhouses such as Douglas, Grumman, North American, and Vought (part of Ling-Temco-Vought = LTV) put forth various submissions, each with potential. The Vought submission in particular was based on their successful F-8 "Crusader" carrier-based strike fighter which became a proven USN contributor during the 1960s. Its airframe was modified slightly to include a shortened fuselage but retained its high-mounted, swept-back wings (though with greater span), tricycle undercarriage, and under-cockpit intake. The adjustable, pivoting wing mainplanes of the F-8 were dropped to simplify the new design for both production and maintenance/operation. After evaluation of all the competing types, the Vought submission was selected in February of 1964 and assigned the USN designation of "A-7" with the name of "Corsair II" - honoring the successful war-winning World War 2-era Vought F4U "Corsair" carrier-based, prop-driven product.

Development of the A-7 platform was relatively fast and three YA-7A developmental models were ordered by the USN in March of 1964. A first flight was recorded on September 26th, 1965 with the engine of choice being the Pratt & Whitney TF30-P-6 turbofan of 11,350 pounds thrust. Its non-afterburning engine decreased fuel consumption which adding operational range but limited speeds to the subsonic range. The initial design was also fitted with all-important radar in the nose via the AN/APQ-116 series system and a Head-Up Display (HUD) in the cockpit made it the first American aircraft to feature this useful, now standard, technology. An ejection seat increased pilot survivability and an advanced, digital weapons suit made for an accurate bomb-delivery platform when compared to contemporaries.

The wing mainplanes were hinged outboard of the hardpoints for improved carrier storage and the tricycle undercarriage designed with the rigors of carrier operation in mind. Underwing hardpoints numbered six in all (three to a wing) and two side-fuselage stations were also in play - mainly to carry AIM-9 "Sidewinder" short-range, Air-to-Air Missiles (AAMs). Total stores capability was theoretically 15,000 pounds made up of a mix of conventional drop bombs, guided ordnance, and homing/guided missiles. Initially 2 x 20mm Colt MK 12 cannons were fitted for close-in work and 250 rounds were afforded per gun installation. A later mark introduced a single 20mm rotary gun with 1,030 rounds carried.

With testing behind it, the YA-7A graduated to its first production form as the "A-7A" and these were taken into USN service in 1966 through Squadron VA-147. In 1967, Initial Operating Capability (IOC) was reached. The A-7 appeared at a time when the American military was firmly committed to actions in and around Vietnam. As such, the Corsair II's baptism of fire was quick to be seen as the aircraft was shipped to the theater in number. Its first sorties came during December of 1967 beginning a long and storied service life for the Vought product.

The A-7A was produced in 199 examples and featured the same powerplant of the developmental-minded YA-7A. The follow-up production model became the A-7B which installed the TF-30-P-8 engine of 12,190lb thrust and these were later modernized with the TF30-P-408 engine of 13,390lb thrust and had their original AN/APQ-115 terrain-following radars (as featured in the A-models) replaced by the AN/APQ-116 series. Total production of B-models reached 196 examples.©MilitaryFactory.com
Advertisements

Sixty-seven examples of the A-7C model followed and these carried a TF30-P-408 engine of 13,400lb thrust output. They were eventually featured with the avionics/armament suite of the upcoming A-7E model. A trainer form emerged as the TA-7C and this featured a two-seat cockpit for student and instructor while being forged from 24 examples of the existing A-7B stock as well as 36 pulled from the A-7C total.

The United States Air Force (USAF) realized the value of the A-7 as a strike platform and ordered its own batch from Vought as the A-7D. These were fitted with the license-built Rolls-Royce Spey turbofan (as the local Allison TF41-A-1) and gave up the 2 x 20mm cannon approach for a simplified 1 x 20mm M61 "Vulcan" internal "Gatling-style" cannon arrangement. They carried AN/APN-185 nav radar and AN/APG-126 terrain-following radar. The "Pave Penny" laser tracker and maneuvering flaps were also part of the product. Serial manufacture became an impressive 459 total example of which many were handed to Air National Guard (ANG) units and saw their combat debut over Vietnam in 1972.

The USN followed the USAF and adopted the A-7D model as the A-7E with modifications to suit carrier-based operations. The nav radar became the AN/APN-190 kit and the terrain-following radar was the AN/APQ-128 series. Its engine was the Allison TF41-A-2 of 15,000lb thrust and Forward-Looking Infra-Red (FLIR) was standard. Production was an even more impressive 529 units for the service.

There were several other less-notable marks to emerge. The YA-7F "Strikefighter" - also known as the A-7D "Plus" - was a proposed upgrade which included a Pratt & Whitney F100 turbofan (the same as featured in the McDonnell Douglas F-15 "Eagle" and General Dynamics F-16 "Fighting Falcon" offerings) which would have given the line a supersonic capability. Its fuselage was stretched for more internal space. This program only netted two prototypes before the endeavor was given up for good.

The A-7G was a proposed mark for export to Switzerland though none were realized before the end. The A-7H was exported to Greece through 60 examples and lacked the in-flight refueling capability of its American brethren. Its two-seat trainer model was the TA-7H. The EA-7L was a two-seat "electronic aggressor" platform serving squadron VAQ-34 and pulled from the TA-7C stock to become eight examples. These were later upgraded to the A-7E standard. The A-7K were thirty airframes used as trainers by the ANG. Portugal received some 44 ex-USN A-7A models fitted with TF30-P-408 series engines and A-7E avionics. Trainer forms followed as TA-7P and were pulled from USN A-7A stocks numbering six total examples. The YA-7E and YA-7H were two-seat private venture products offered by LTV but fell to naught.

As a combat platform, the A-7 series succeeded its expectations. Of the nearly 13,000 sorties flown over Vietnam by the aircraft, just six were counted lost in the whole of the war. It proved itself one of the most accurate bomb-delivery platforms during the conflict. The line saw additional combat service in the Grenada invasion (1983) and in actions over Lebanon that same year. During 1986, the aircraft was used against Libyan in targeting Surface-to-Air Missile (SAM) positions. The aircraft was then featured in the 1991 Gulf War where its precision strike capabilities were used to good effect. During the contest, the aircraft also flew as converted aerial refueling tankers with success. Some of its final service with American forces came in the training role for the Lockheed F-117 "Nighthawk" stealth fighter program where its subsonic qualities were equal to that of the next-generation, radar-evading bomber.

Final A-7s in American service were retired during 1993 and the Portuguese Air Force gave up use of the type in 1999 followed by the Hellenic Air Force in 2014. Thai A-7s are under a "non-operational" status and can be presumed officially retired bringing an end to the operational service life of this fine aircraft. Many have survived as preserved museum showpieces.©MilitaryFactory.com
Note: The above text is EXCLUSIVE to the site www.MilitaryFactory.com. It is the product of many hours of research and work made possible with the help of contributors, veterans, insiders, and topic specialists. If you happen upon this text anywhere else on the internet or in print, please let us know at MilitaryFactory AT gmail DOT com so that we may take appropriate action against the offender / offending site and continue to protect this original work.
Advertisements

Greece; Thailand; Portugal; United States (retired)
(OPERATORS list includes past, present, and future operators when applicable)
✓ Air-to-Air Combat, Fighter
General ability to actively engage other aircraft of similar form and function, typically through guns, missiles, and/or aerial rockets. ✓ Ground Attack (Bombing, Strafing)
Ability to conduct aerial bombing of ground targets by way of (but not limited to) guns, bombs, missiles, rockets, and the like. ✓ Maritime / Navy
Land-based or shipborne capability for operating over-water in various maritime-related roles while supported by allied naval surface elements. ✓ Aerial Refueling (Tanker)
Dedicated or converted airframe used to deliver fuel to awaiting allied aircraft. ✓ Training (General)
Developed ability to be used as a dedicated trainer for student pilots (typically under the supervision of an instructor).

(Not all ordnance types may be represented in the showcase above)
Hardpoint Mountings: 8 (two reserved for Sidewinder AAMs)
Mounting Points 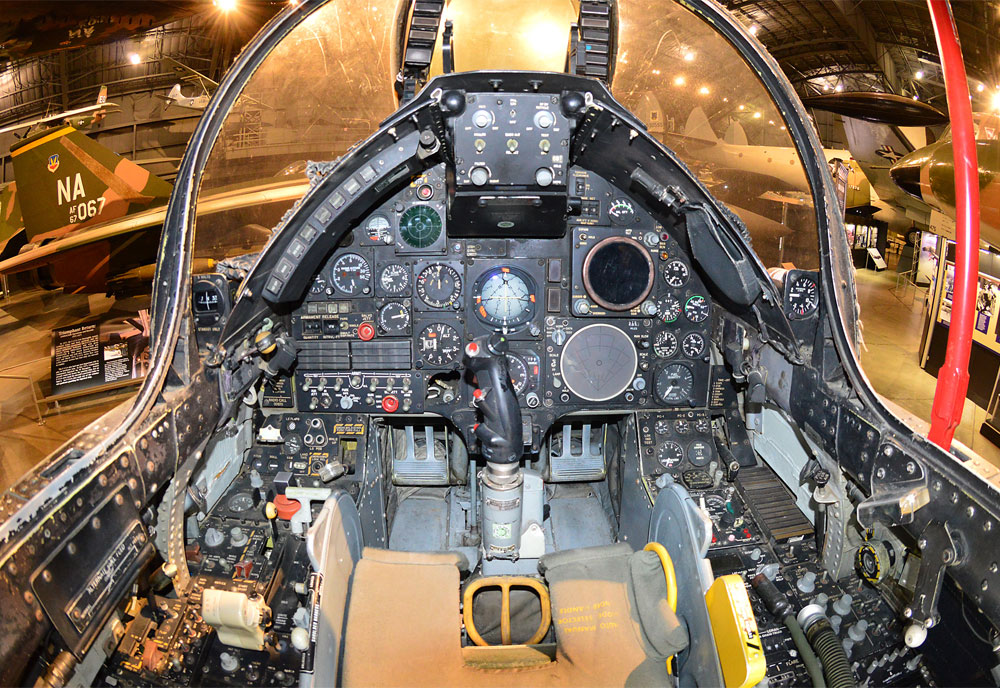 General Assessment
Firepower
Performance
Survivability
Versatility
Impact
Values are derrived from a variety of categories related to the design, overall function, and historical influence of this aircraft in aviation history.
Overall Rating
The overall rating takes into account over 60 individual factors related to this aircraft entry.
80
Rating is out of a possible 100 points.
Firepower Index (BETA) 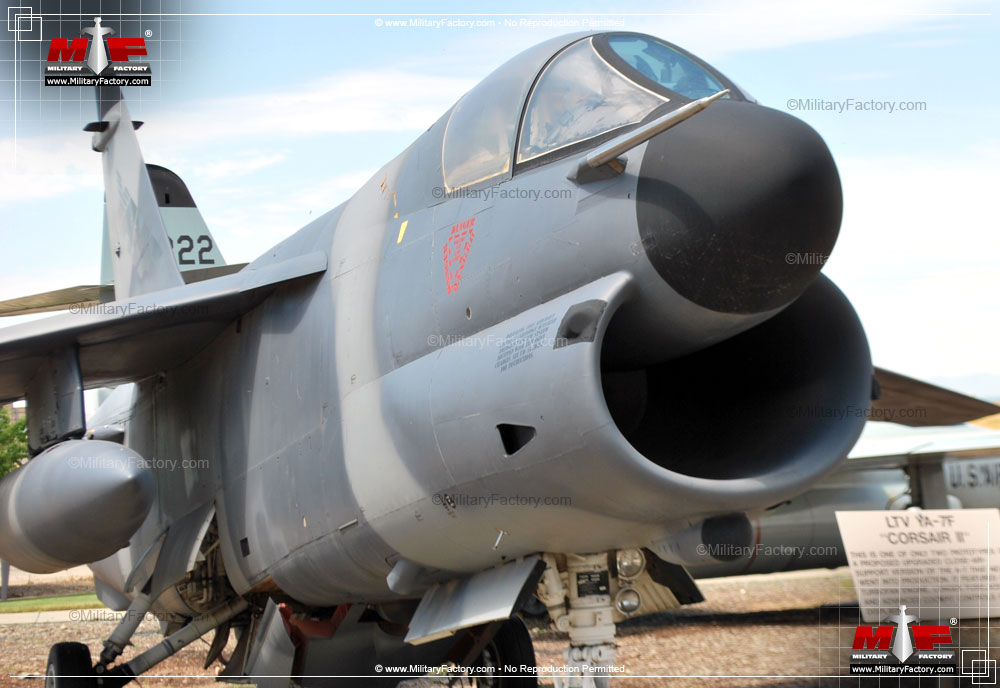 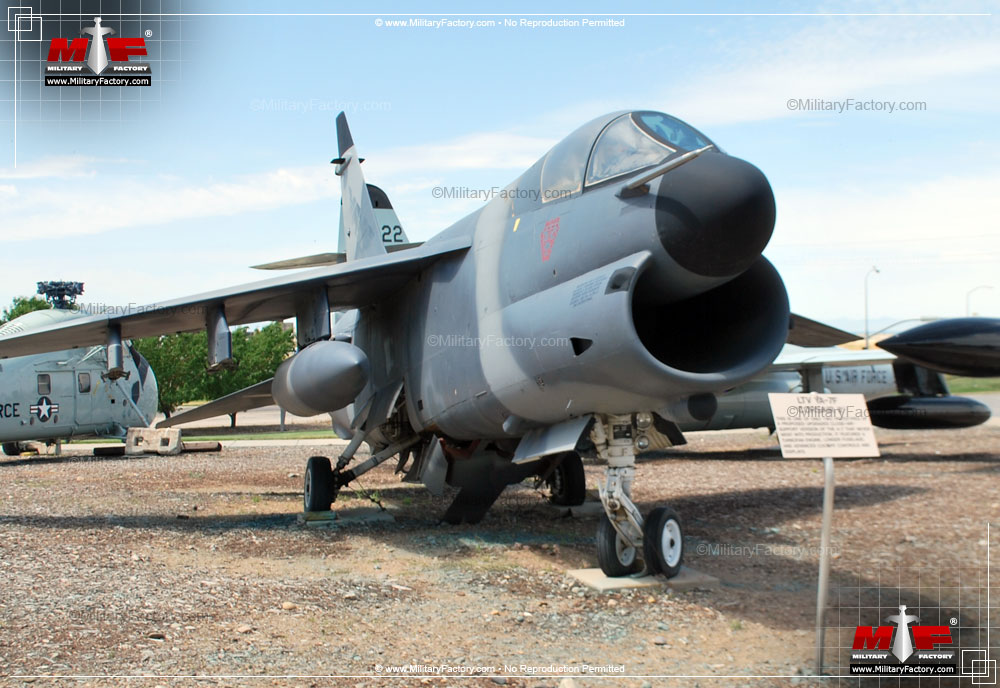 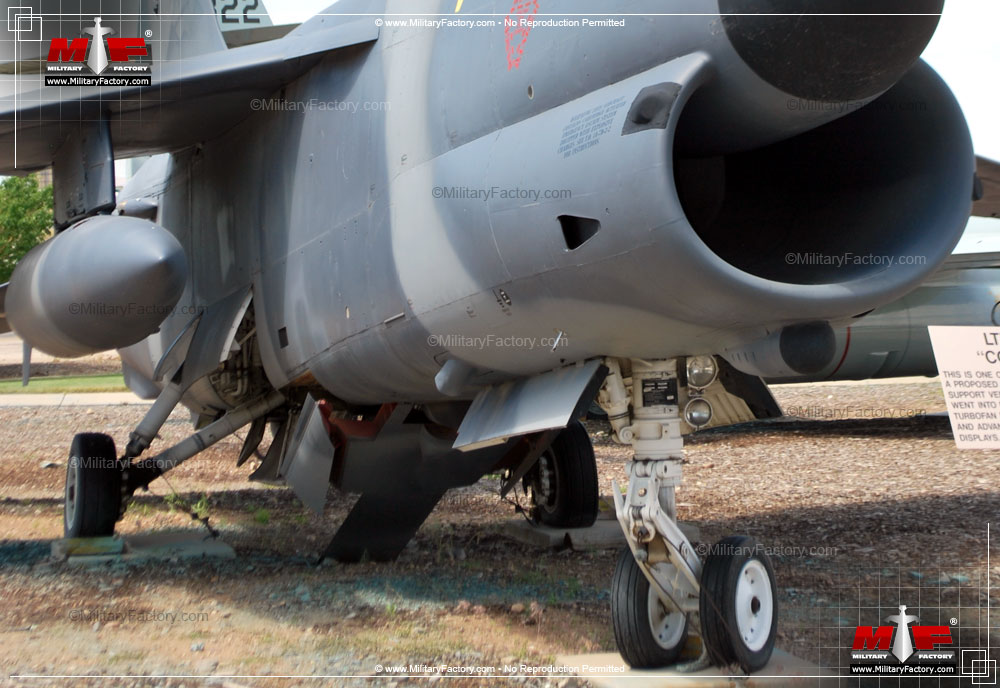 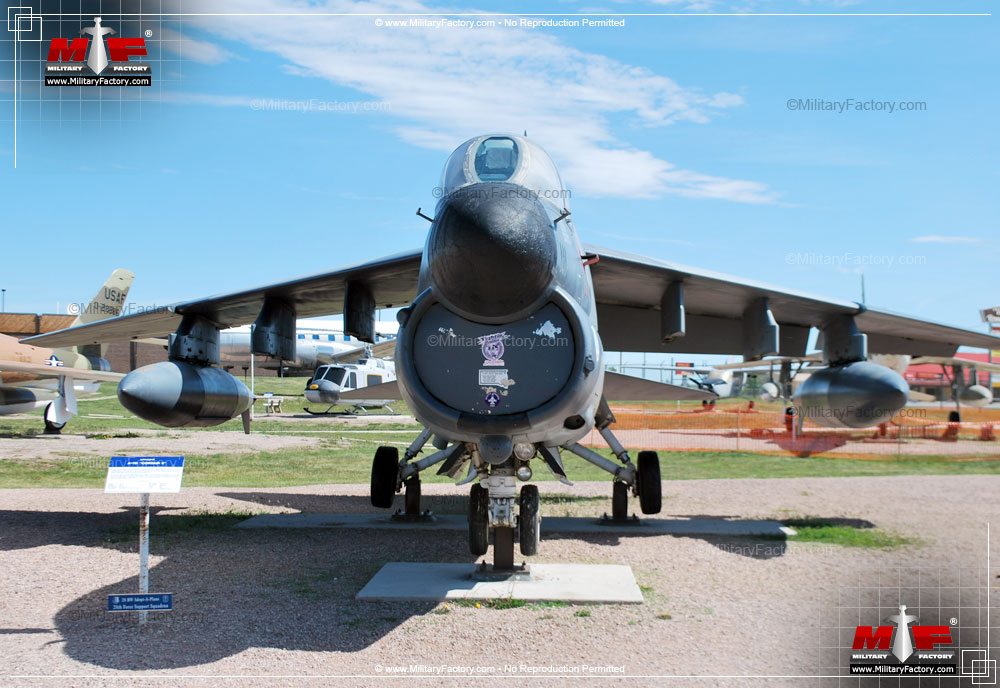 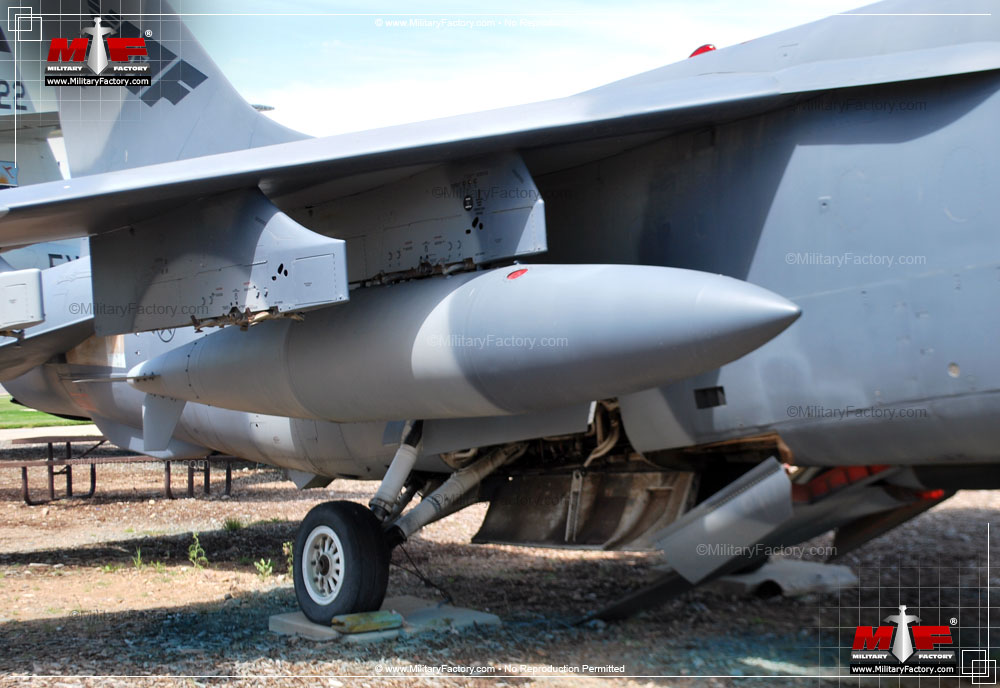 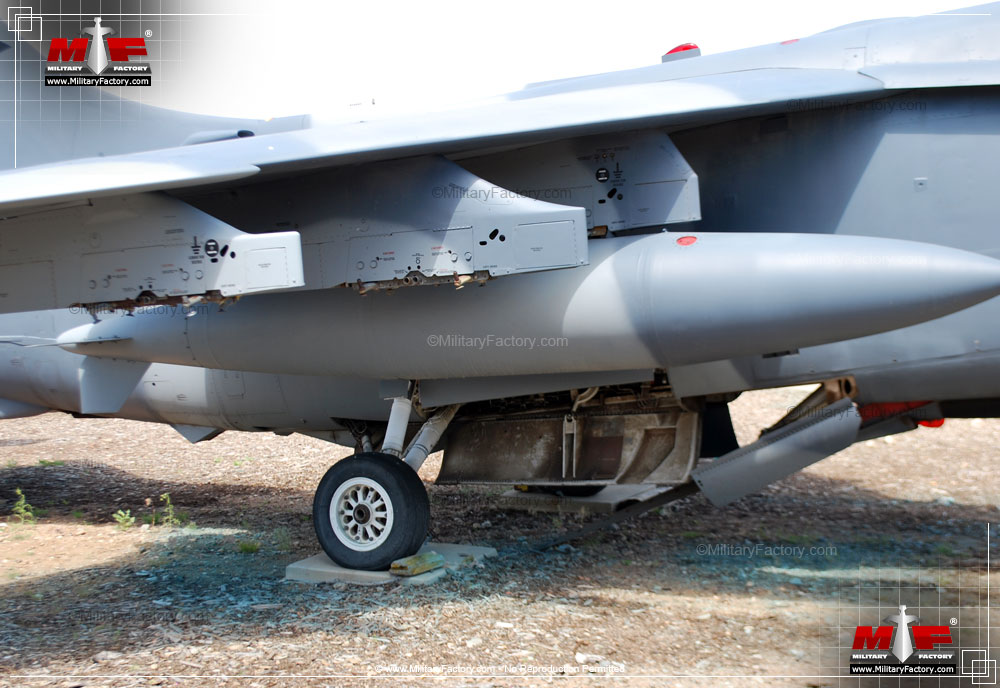 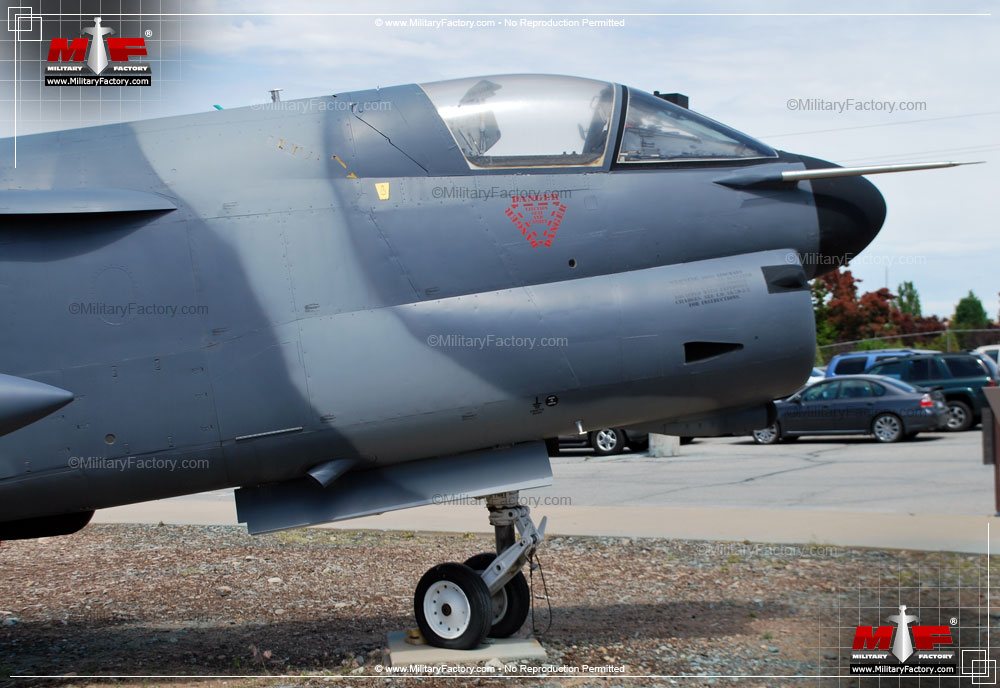 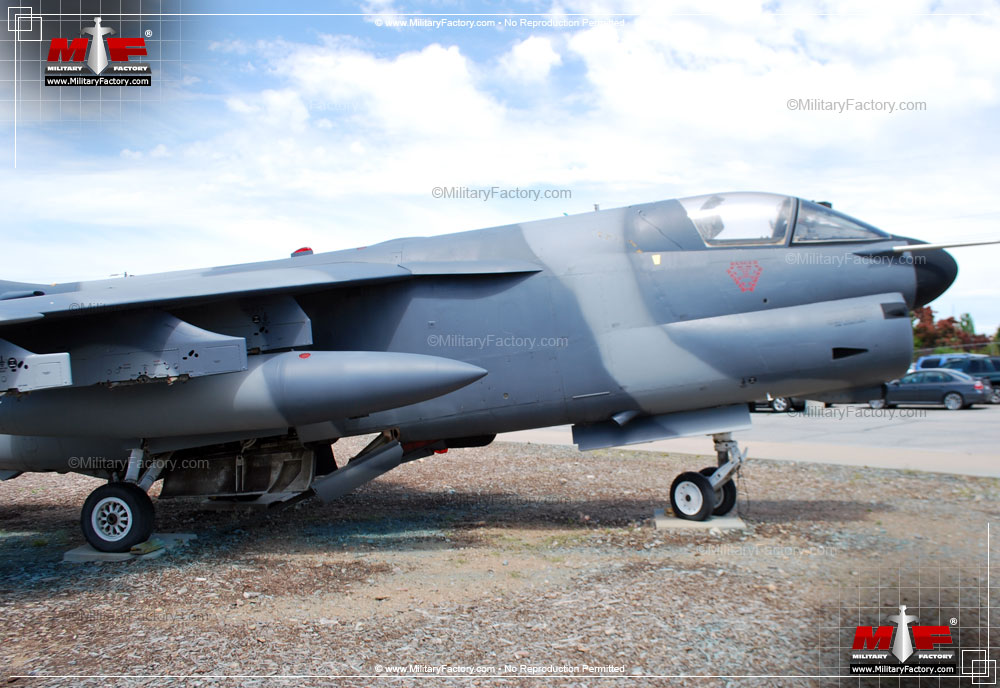 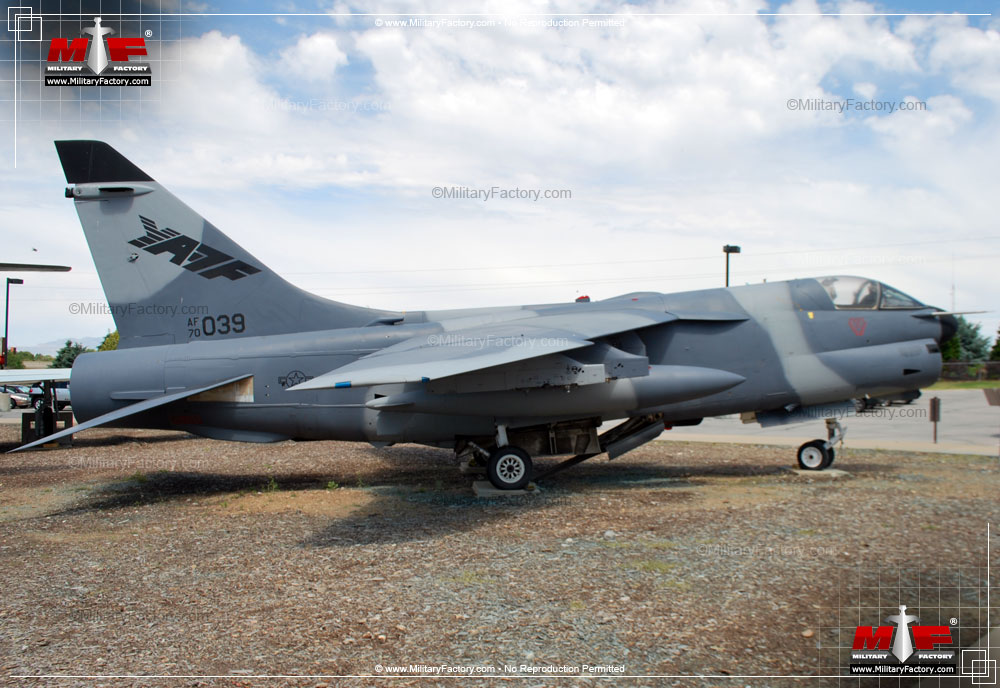 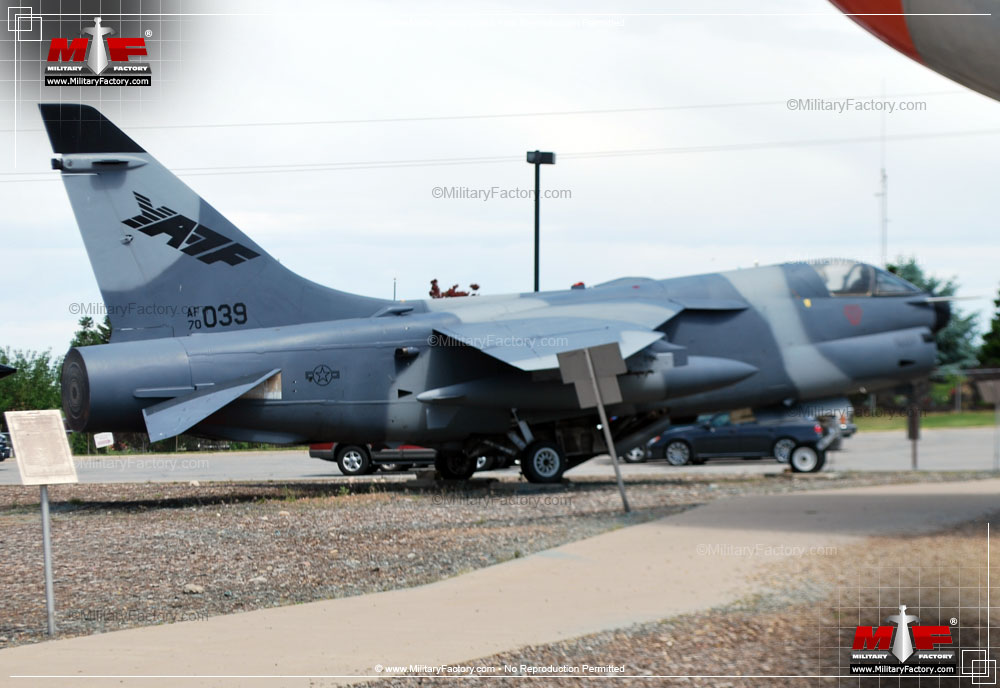 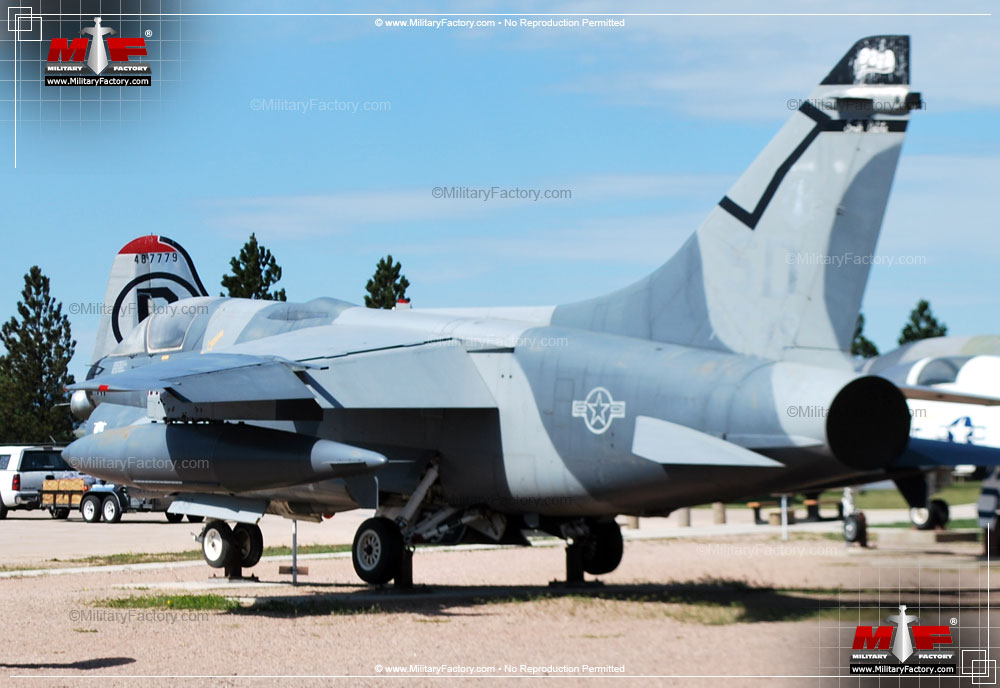 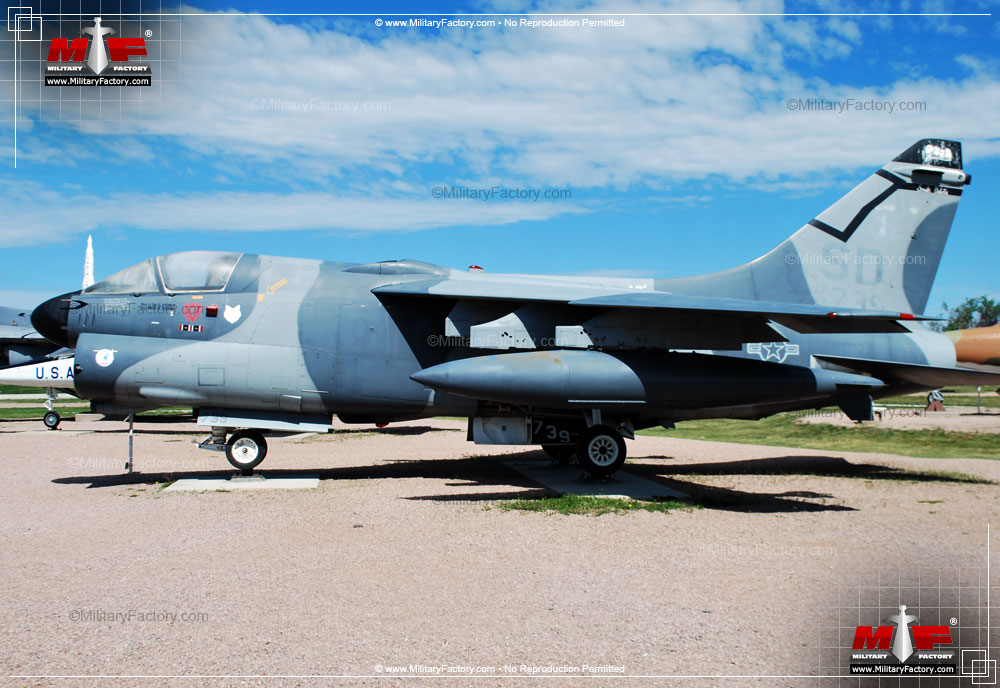 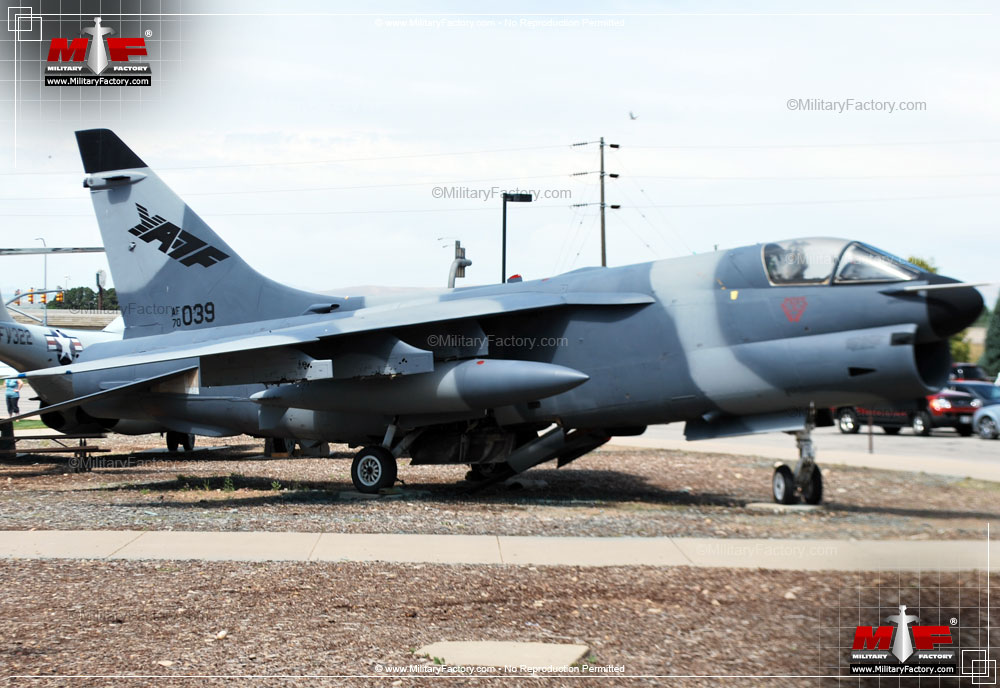 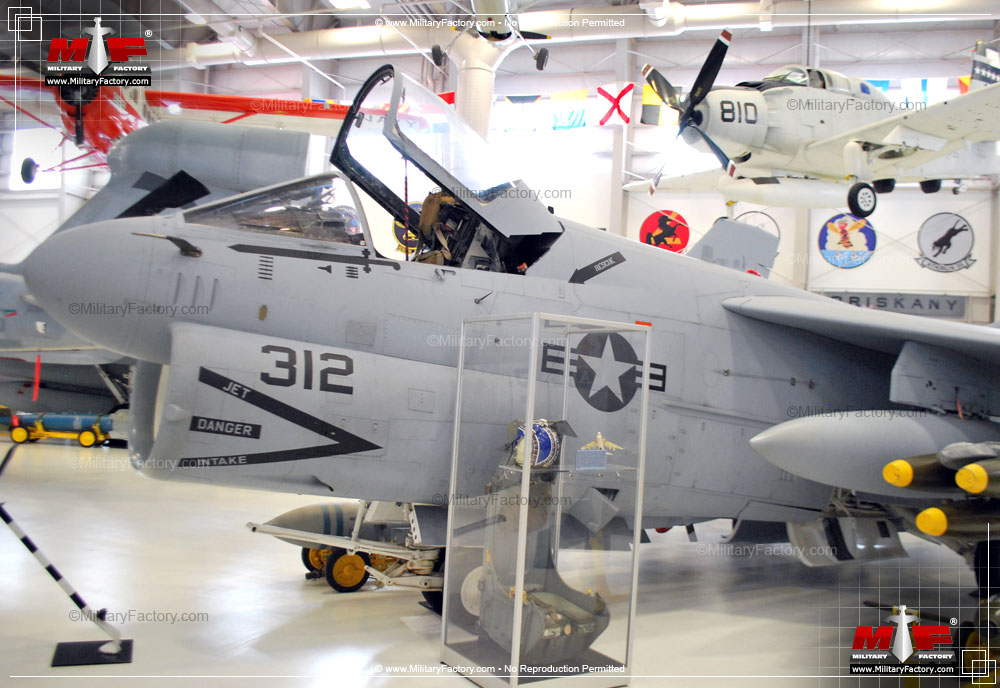 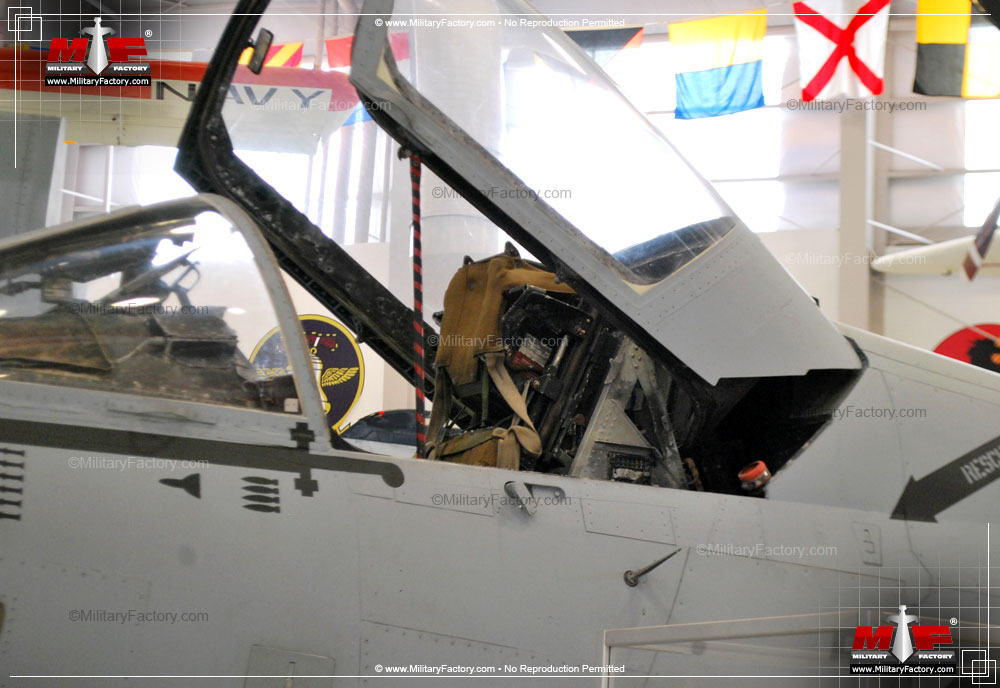 Aviation developments of similar form and function, or related to, the LTV A-7 Corsair II...