The storied Vought F-8 Crusader carrier-based fighter served in an operational role for over 40 years with the United States, the Philippines, and France. 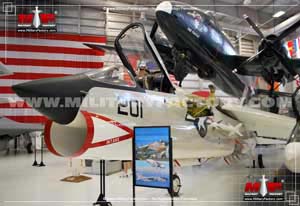 The Vought F-8 "Crusader" was a direct response to a United States Navy requirement for a modern supersonic, carrier-based fighter. Utilizing nearly the identical powerplant of the North American F-100 "Super Sabre", the F-8 Crusader became the world's first carrier-based aircraft to break the speed of sound. The single-seat Crusader featured a long fuselage with a swept-back high-wing assembly and single-engine installation. A single vertical tail fin was fitted over the rear of the fuselage. The engine, exhausting through a large jet pipe at rear, generated upwards of 18,000lb thrust with an afterburn capability. As a naval carrier-based fighter, the aircraft was fitted primarily with 4 x 20mm internal cannons for close-in work and supported early forms of American air-to-surface missiles (no ground attack capability was added) including the AIM-9 Sidewinder short-range missile. Crusaders were eventually pressed into service over the skies of Vietnam with the growing American commitment in Southeast Asia. There it served with both the United States Marine Corps (USMC) and the United States Navy (USN).

Of eight initial submissions viewed by USN authorities, the Vought F-8 design was selected for prototyping (as the XF8U - two examples completed). Carrier operations required special qualities in an aircraft, none more so important than the ability to take-off from a short runway, have an integrated tailhook for landing and feature a reinforced undercarriage capable of withstanding the violent force of carrier deck landings. The Vought submission fit the bill with the initial production version designated as F8U-1. The F-8 was also engineered with a special "tilting" wing assembly that could move up 7-degrees from its rest position. This minor movement allowed the aircraft the ability to achieve the short take-off and landings consistent with carrier operations.

The production-quality F8U-1 showcased underwing missile rails which proved a feature not found on the prototypes. The aircraft was capable of supersonic flight and set various speed and endurance records in its early career. In fact, it would be future astronaut and future United States Senator John Glenn that piloted a reconnaissance version of the Crusader from one American coast to the other - a flight taking just over 3 hours. 1962 saw the United States Navy adopt a revised aircraft designation system set down by the United States Air Force (USAF). From this point onwards, all Crusader variants (and other USN aircraft) would inherit all-new designations based on this change. As such, the F8U-1 simply became the F-8A model.
Advertisements

The F-8 stocked the USN and USMC inventories during the Vietnam War (1955-1975. Its first operational combat sorties took place on August 2nd, 1964. After an attack by four North Vietnamese patrol boats on the USS Maddox destroyer, four Crusaders were dispatched from USS Ticonderoga and were able to sink one of the escaping vessels. The U.S. Navy would go on to utilize the Crusader in more of a traditional dogfighting interceptor role whilst the US Marines operated it as a limited strike/attack aircraft.

The Crusader eventually proved its worth through action and resiliency. It found frontline service across four decades including service with the French Navy (Aeronavale). French Crusaders were a specially-produced export breed designated as F-8E(FN) and these aircraft were given blown flaps to assist the aircraft in landing and taking off from the shorter and smaller French-made carriers. The French acquired some 42 Crusaders in this form and these served until replaced by the modern Dassault "Rafale" 4th Generation fighter beginning in 2000. This retirement marked the last official operational F-8 in service anywhere.

The Philippines Air Force was the third and final operator of the F-8 and these were retired in 1991. These were second-hand USN aircraft purchased when more modern products proved fiscally elusive to the Philippines government. 35 aircraft were delivered and were F-8H models. All were scrapped.

The XF8U-3 was a highly modified offshoot of the F-8 Crusader line featuring a revised air intake, nose cone assembly and large, folding ventral strakes under the tail. This version became known as "Crusader III" following the original F-8A ("Crusader I") and F-8C ("Crusader II") models. The prototypes competed unsuccessfully against the McDonnell Douglas offering that would eventually become the fabled F-4 "Phantom II" fighter. Both the F-8 and F-4 served in the skies over Vietnam.
Advertisements

(Showcased performance specifications pertain to the base Vought F-8 Crusader production variant. Compare this aircraft entry against any other in our database or View aircraft by powerplant type)
STANDARD:
4 x 20mm Internal automatic cannons.

General Assessment
Firepower
Performance
Survivability
Versatility
Impact
Values are derrived from a variety of categories related to the design, overall function, and historical influence of this aircraft in aviation history.
Overall Rating
The overall rating takes into account over 60 individual factors related to this aircraft entry.
82
Rating is out of a possible 100 points.
Relative Maximum Speed
Hi: 1200mph
Lo: 600mph
This entry's maximum listed speed (1,118mph). 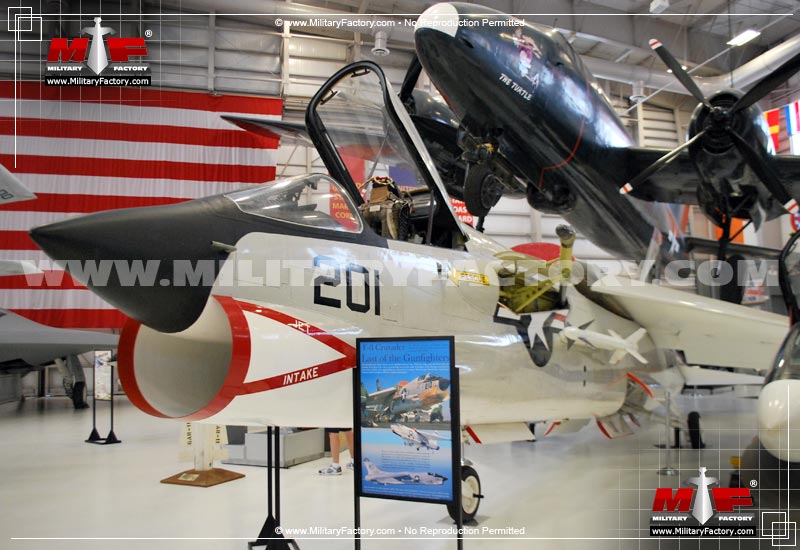 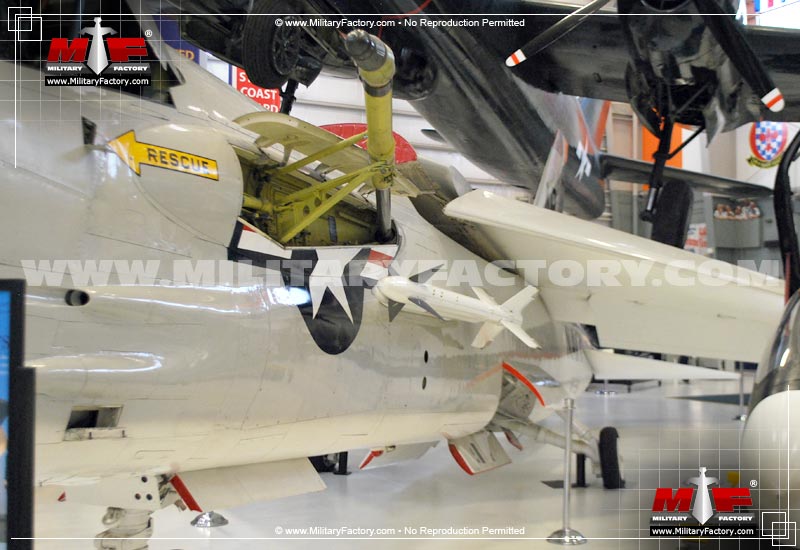 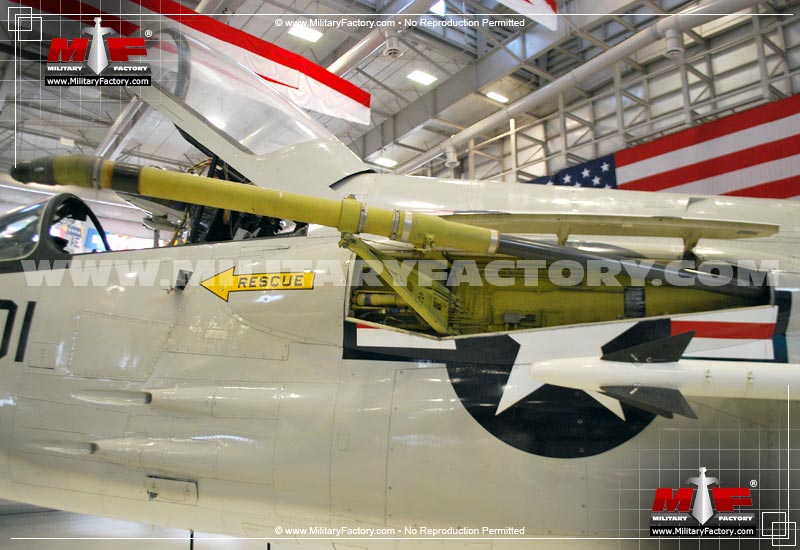 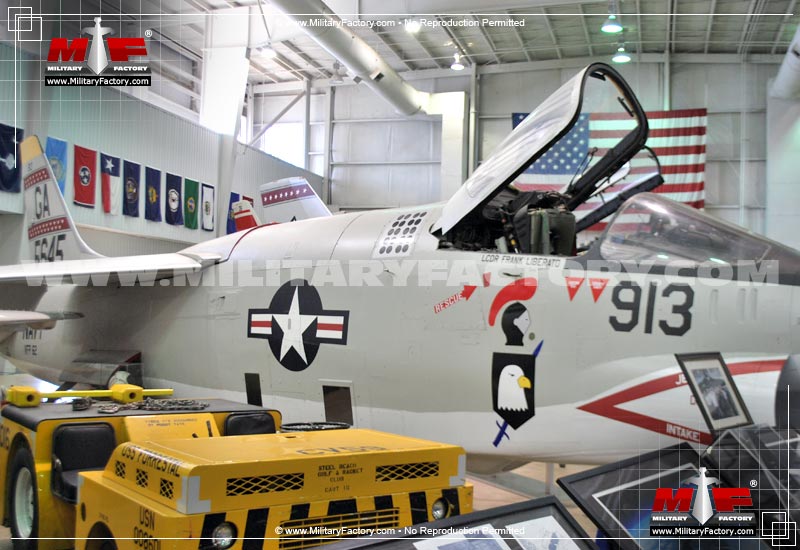 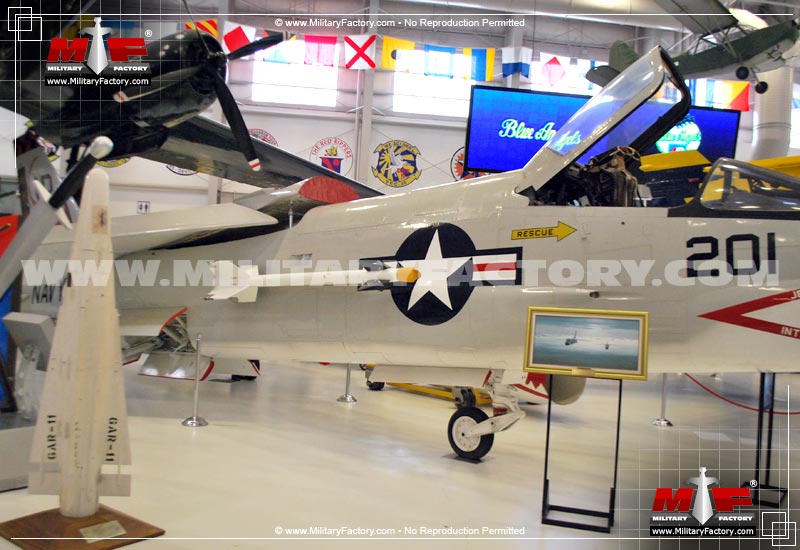 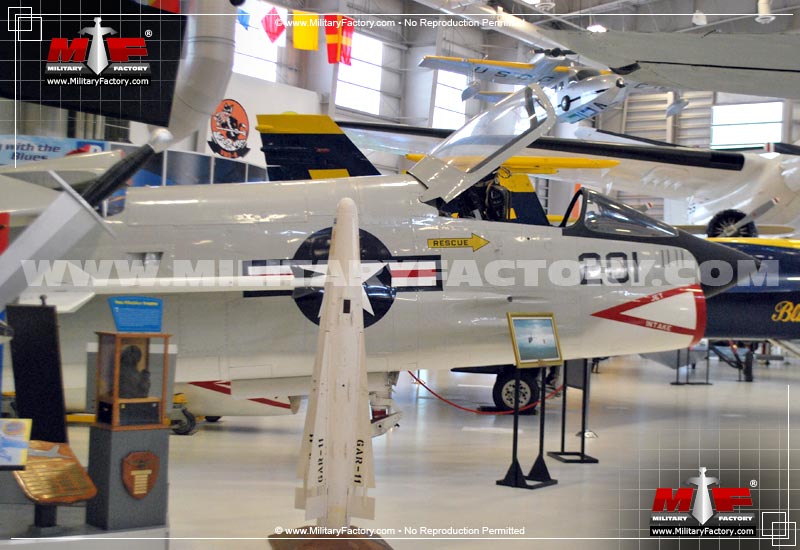 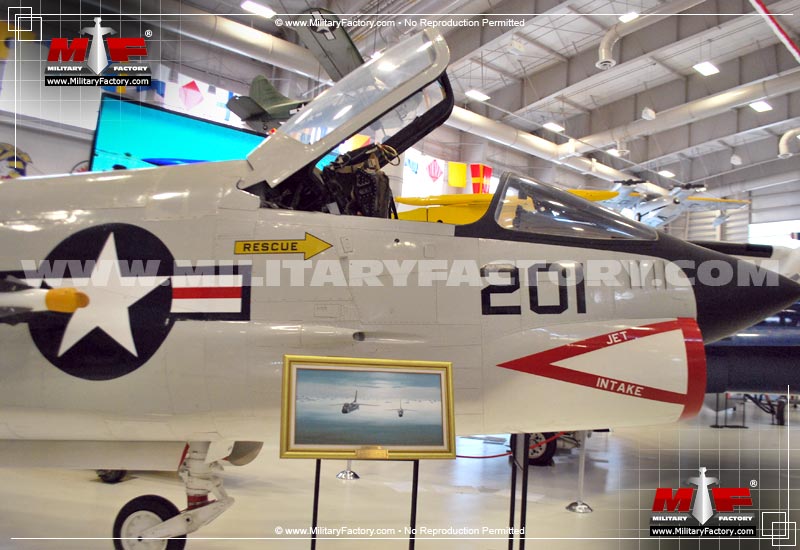 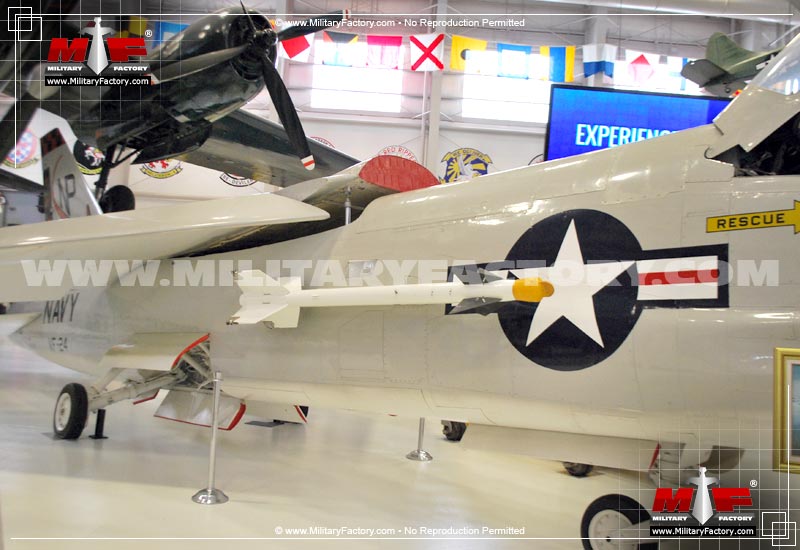 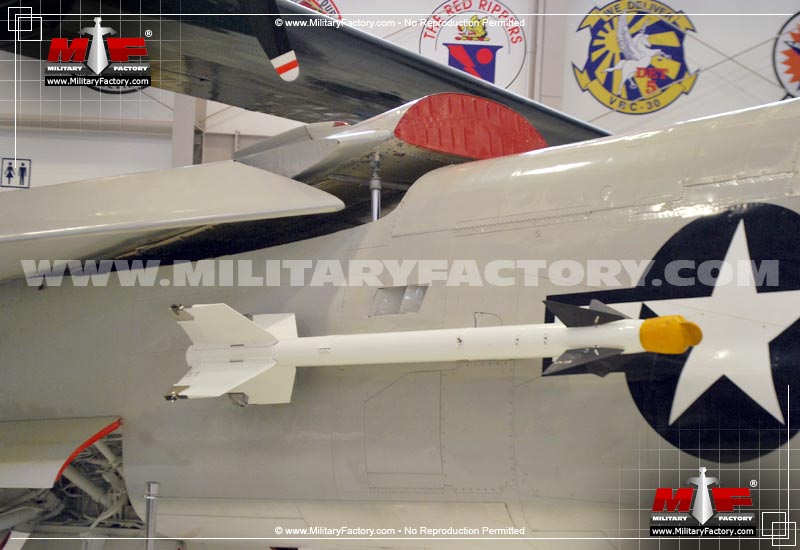 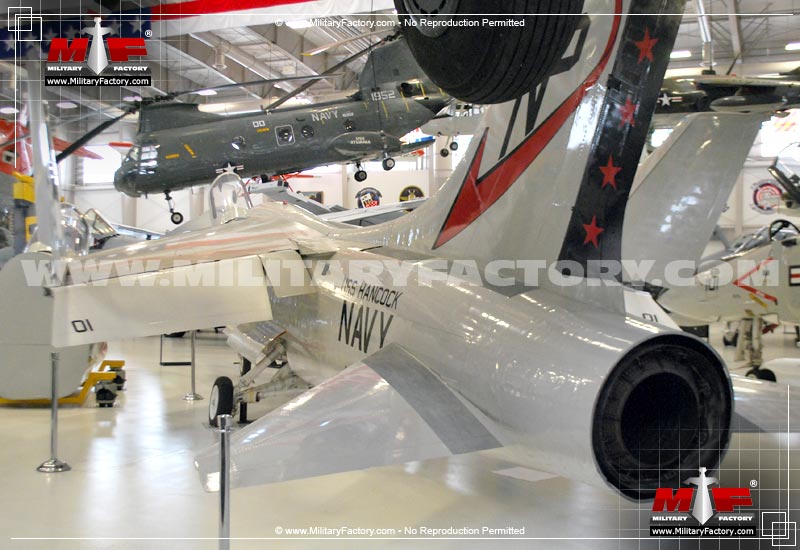 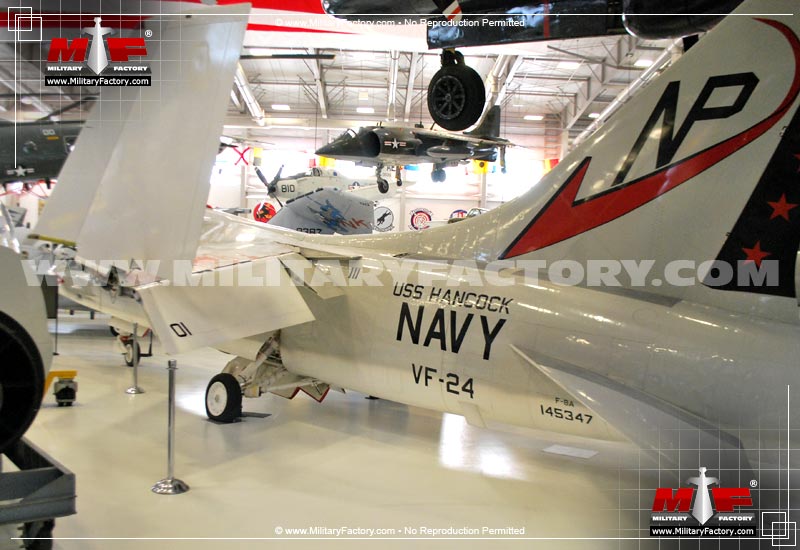 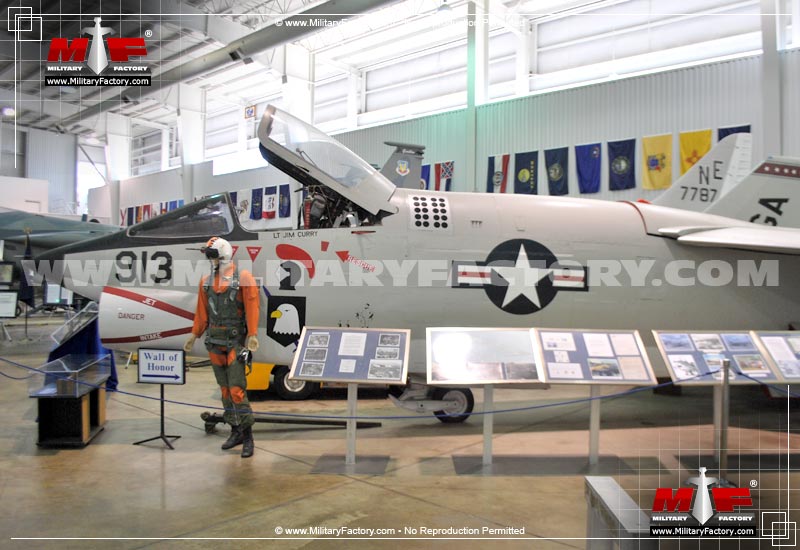 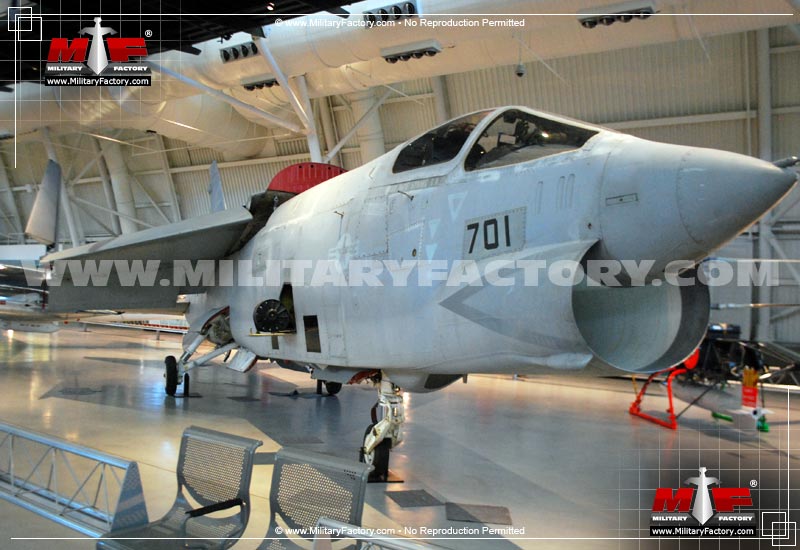 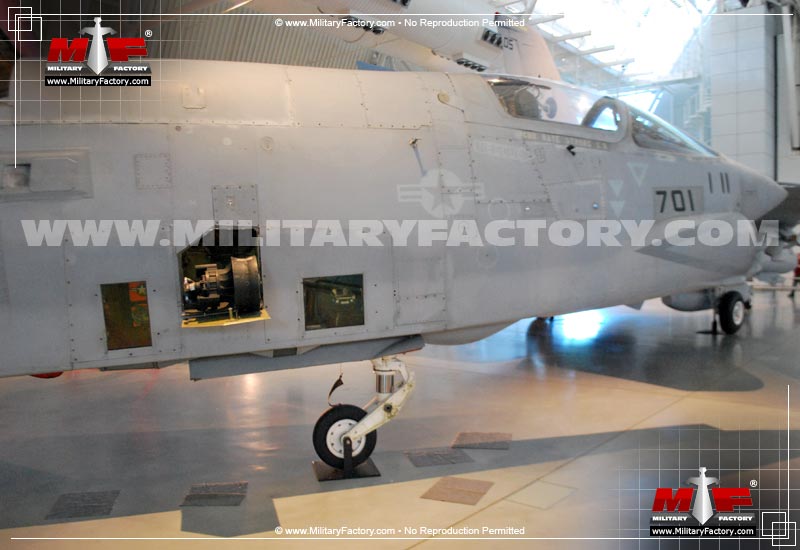 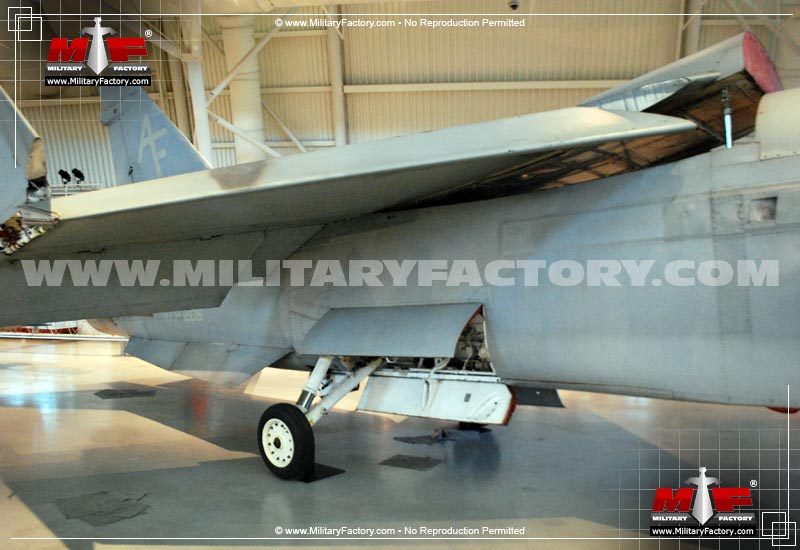 Aviation developments of similar form and function, or related to, the Vought F-8 Crusader...