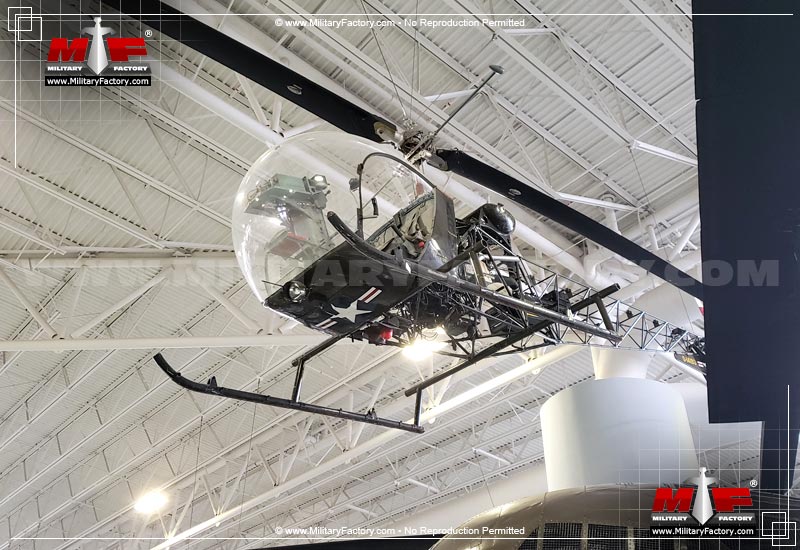 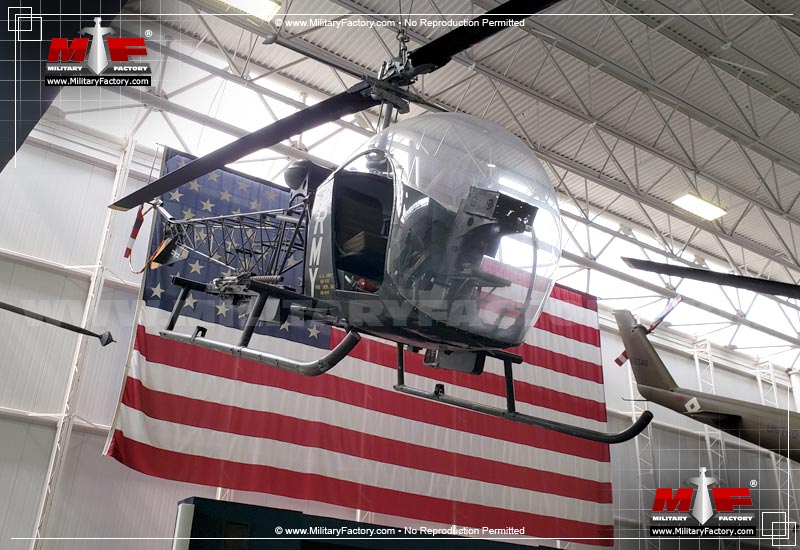 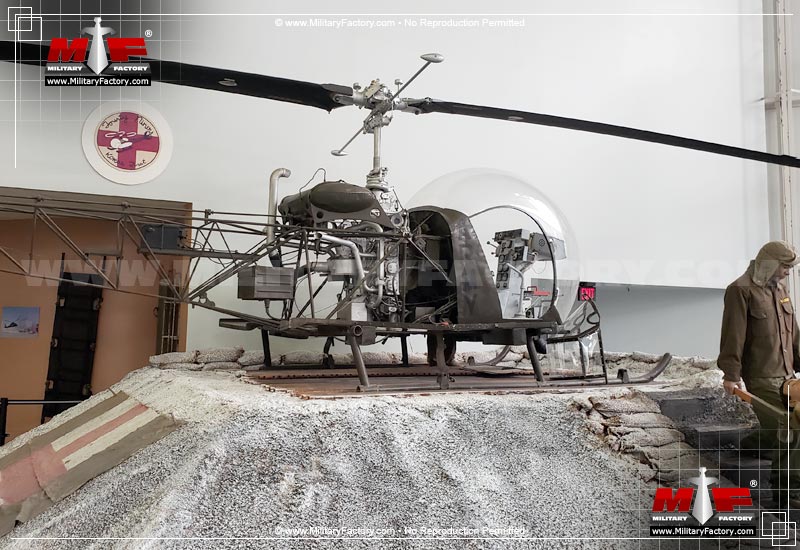 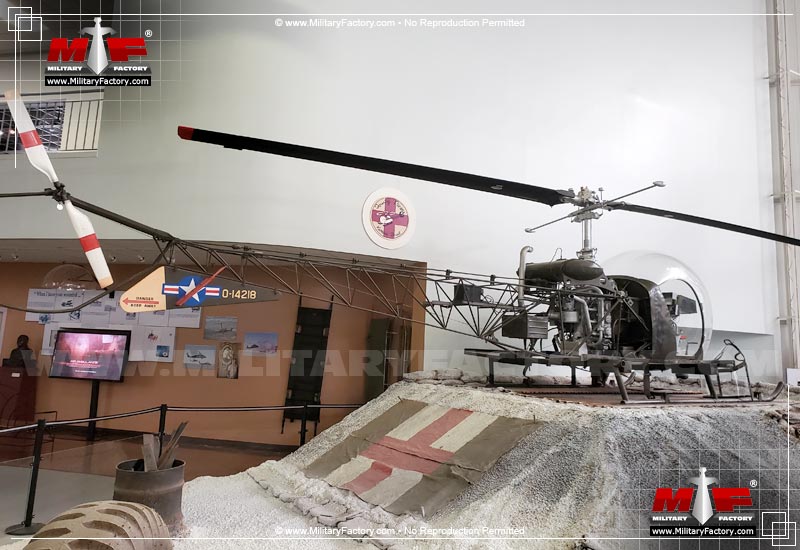 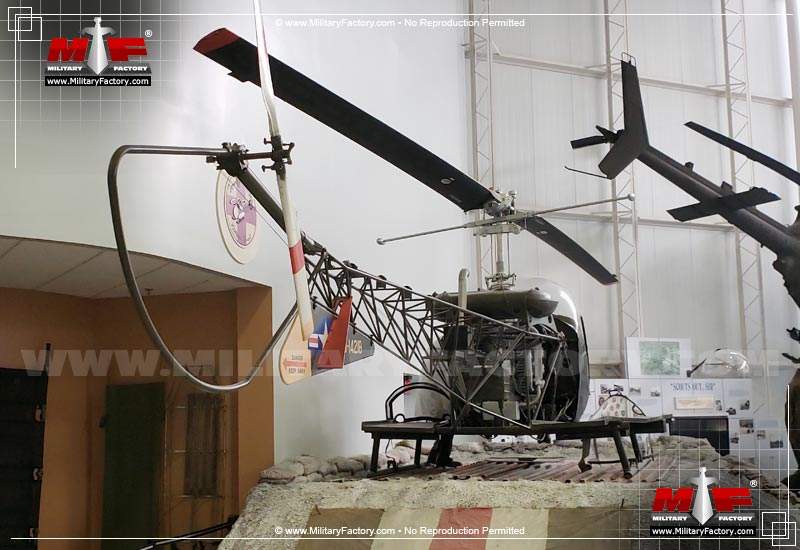 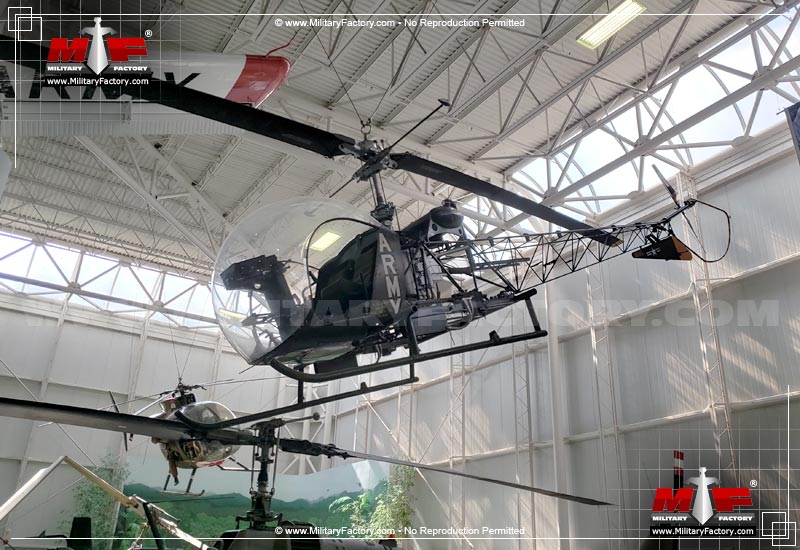 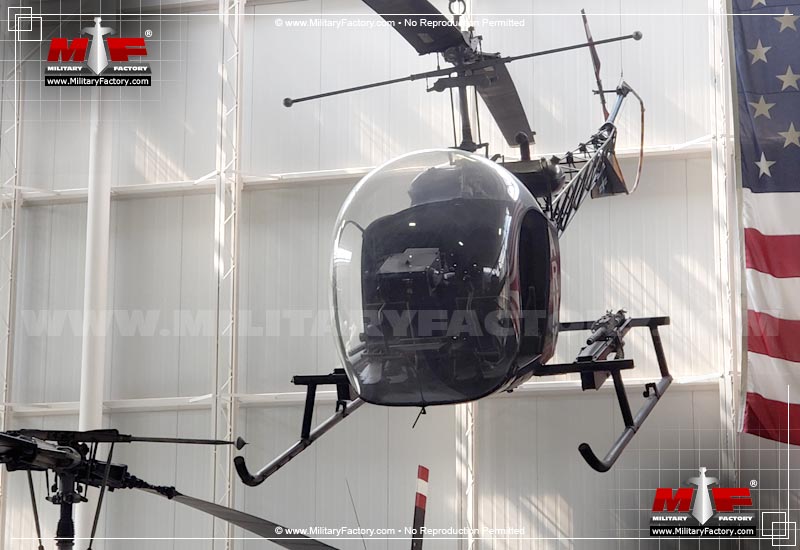 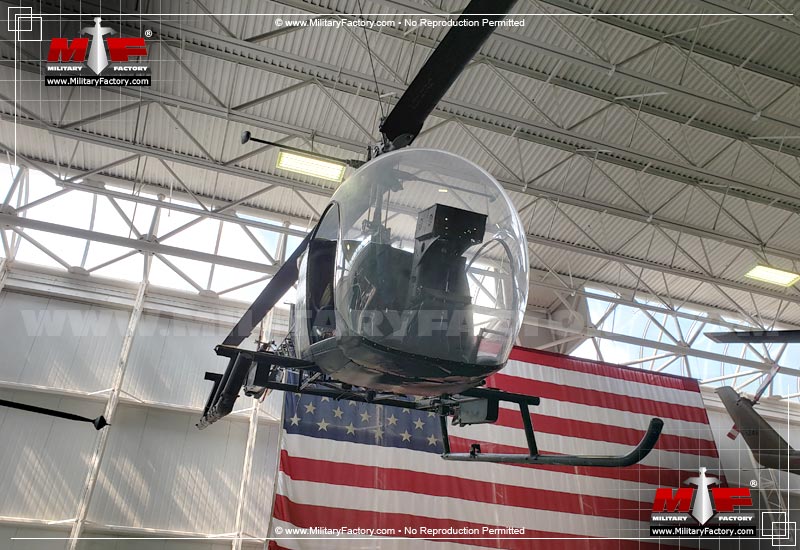 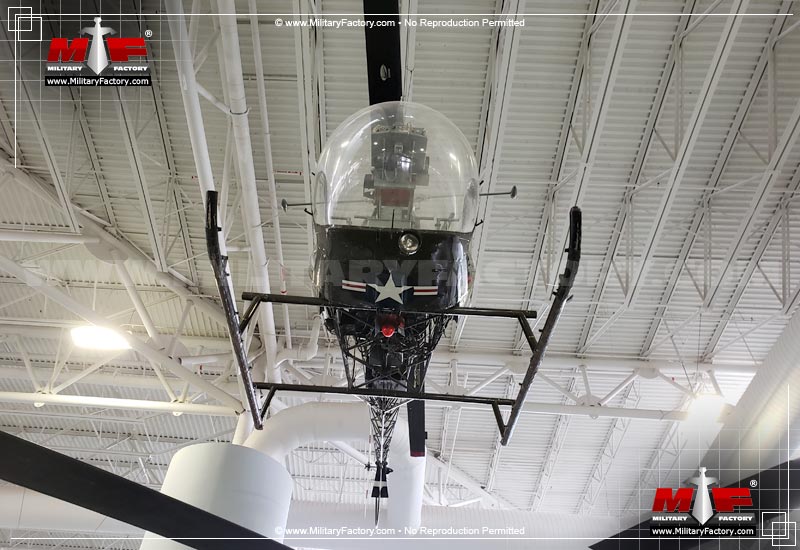 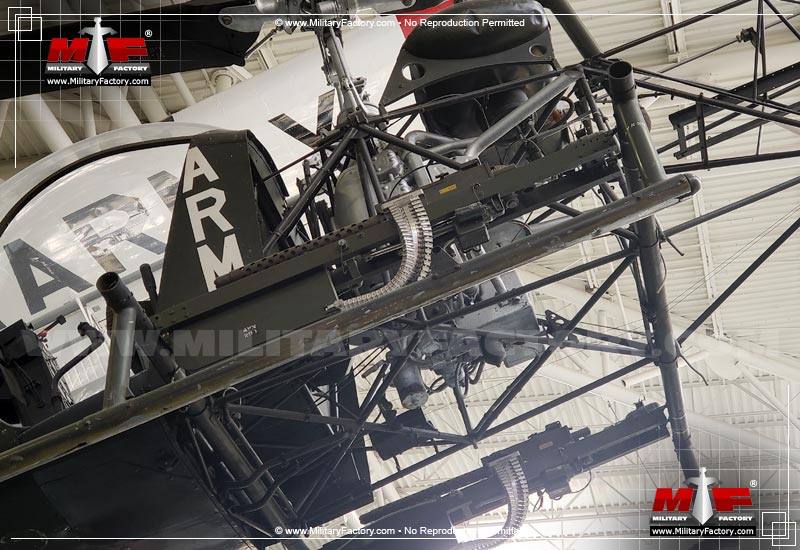 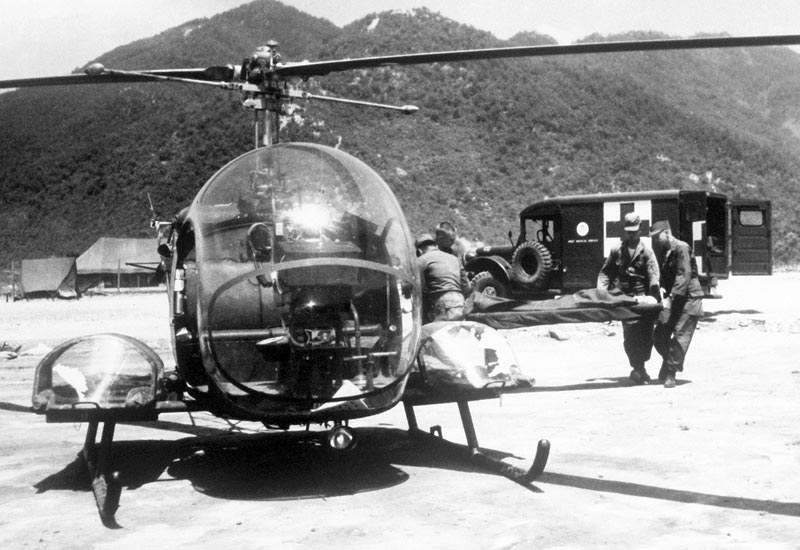 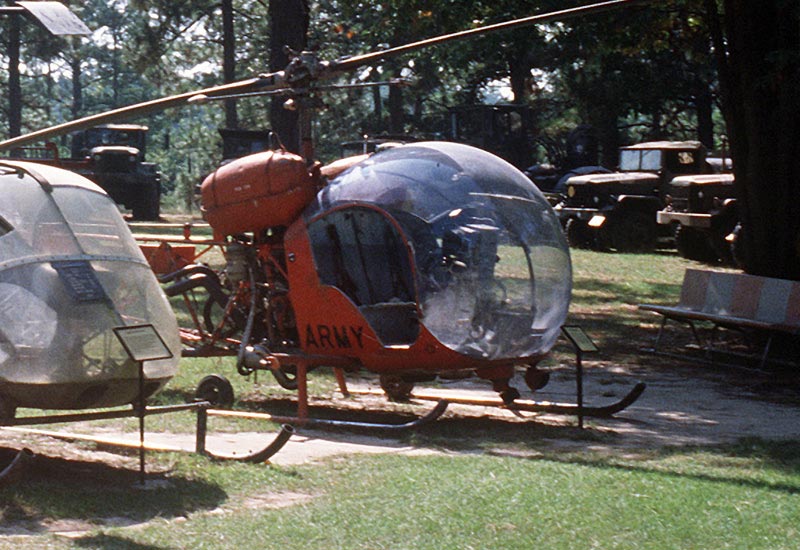 The "helicopter" saw development during World War 2 (1939-1945) and some were in fact used by the Germans in the latter phases of the conflict. For the United States, Bell Helicopters had adopted the designs of Arthur M. young which gave rise to the Model 30 prototype. This prototype then became the basis for the famous Model 47 of which 5,600 were produced from 1946 to 1974 and utilized by a plethora of global operators in both civilian and military guises. The United States Army adopted the Model 47 under the designation of H-13 "Sioux" and this little helicopter served extensively through the Korean War (1950-1953) while seeing some used in the early phases of the Vietnam War (1950-1975) as well. Approximately 2,400 examples of this form were built and stocked the inventories of many global militaries. First flight of the prototype was recorded on December 8th, 1945. The platform served the US Army, Air Force and Navy during its long tenure while UK-based Westland produced the type under license as the Sioux AH.1/HT.2.

The H-13 marked the first large-scale procurement of a helicopter into the US military inventory and became the first helicopter type aircraft to arrive in the Korean Theater of War. It also marked the first US Army helicopter to carry an American Indian tribal name ("Sioux"), still a practice today as proven by the Boeing AH-64 "Apache" and Bell OH-58 "Kiowa".

At its core, the foundation of the Model 47 was clearly apparent in the H-13. The design would eventually evolve into the "classic" Model 47 "look" complete with bubble canopy, skeletal tail unit and skid undercarriage. Their utilitarian appearance granted them utilitarian-minded roles in military service - from light scout to MEDEVAC among many others. There was seating for two to three persons in standard forms while power was served through a Franklin or Lycoming engine. In either guise, the powerplant of the H-13 was used to drive a two-blade main rotor and a two-blade tail rotor, the latter as an anti-torque feature to counter the pull presented by the main rotor blades.

The initial militarized Model 47 fell to the US Air Force as the YR-13 (Model 47A) in 1947 - 28 airframes following - and these were powered by a Franklin O-335-1 piston engine of 175 horsepower. YR-13A models were "winterized" for Arctic use in Alaskan airspace and saw three examples produced. In 1948, the US Army followed suit and ordered the line as the H-13. US Navy models were designated HTL-1 with the HTL-2 being based on the civilian Model 47D and twelve examples were produced. HTL-3 was based on the Model 47E and outfitted with the Franklin 6V4-200-C32 engine of 200 horsepower. Nine examples were produced. HTL-4 became the definitive mark of the US Navy line and was redesignated as TH-13L. HTL-5 was outfitted with the Lycoming O-33505 engine. TH-13M was the HTL-6 redesignated and featuring an added elevator.

H-13B served the US Army from 1948 onwards and numbered 65 examples in production. YH-13C was reserved as an active testbed and begat the H-13C production mark of which sixteen emerged as conversions from the H-13B line. The H-13D was a basic two-seat observation model based on the Model 47D-1 and powered by a Franklin O-335-5 series engine. 87 were produced in all. The OH-13E was an H-13D with seating for three and dual-controls for both pilot positions - 490 were produced. XH-13F was the Model 47G airframe modified to take on the Continental XT51-T3 turbine engine. The OH-13G was a three-seat form of the Model 47G and 265 were accepted by the US Army. The OH-13H was the Model 47G-2 powered by a Lycoming VO-435 engine of 250 horsepower. US Army usage numbered 450 examples while the USAF took stock of some as the UH-13H. The UH-13J (H-13J) were a pair of revised Model 47J-1s for USAF VIP service. The OH-13K were a pair of modified H-13H models with a Franklin 6VS-335 engine of 225 horsepower to serve as testbeds. OH-13S was adopted by the US Army across 265 examples and were Model 47G-3Bs with seating for three. The TH-13T was a trainer variant based on the Model 47G-3B-1 and outfitted with the Lycoming TVO-435-D1B engine of 270 horsepower. At least 411 were taken on by the US Army.

Sioux AH.1 models were a British Army mark - the Model 47G-3B1 produced in 250 examples by Westland. The Sioux HT.2 was its trainer derivative and served the Royal Air Force through 15 examples manufactured by Westland. Italian-based Agusta produced the AH.1 as well and this numbered 50 examples.
Advertisements

During the Korean War, the H-13 was utilized in various battlefield roles. Its size made them air-transportable in the hold of a Fairchild C-119 "Flying Boxcar" lifter. Some 56 H-13s were available at the beginning of the war in 1950, this stock made up primarily of YH-13A and H-13B models. The initial group to arrive in Korea was the 2nd Helicopter Detachment during November of 1950.

While the aircraft is primarily remembered for its MEDEVAC service through M.A.S.H. ("Mobile Army Surgical Hospital"), the type proved equally valuable in reconnaissance, wire-laying, mission liaison, general service and pilot training roles. Controls were relatively simple and the instrument panel compact while the transparent canopy offered excellent vision out of the cockpit for both crew. As a trainer, it was the stepping stone for pilots entering the H-19 "Chickasaw" piloting program. It also served as a training platform for Transportation Corps prior to their arrival in Korea and for Apollo astronauts to experience auto-rotation sink rates.

Of course the moving of wounded played a crucial role to Army/Air Force operations across the Peninsula where an H-13 could carry a pair of medical litters over the unforgiving Korean terrain to provide faster assistance to the wounded - speedier than any all-terrain vehicle could over miles of uneven, rocky land. Over time, modifications were added to patient areas such as heat and protection from the elements to provide some comfort thousands of feet in the air. Blood replacement could even be handled by way of a plasma bottle holder fitted to the inside of the crew cabin. H-13s provided such a valuable service in the war that they were dubbed "Angles of Mercy". Indeed, a single H-13 pilot was credited with moving some 922 personnel through 545 sorties in a term lasting 14 months.

In 1952, the H-13 took part in a pair of large-scale resupply operations. The first one lasted seven days and involved just a single H-13 hauling some 20,000lbs to awaiting combat engineers atop a mountain. In the second, lengthier, 10-day operation, several H-13s hauled 17,000lbs of goods and reinforcements to allied infantry elements 800 yards behind enemy lines, also atop a mountain.

While typically unarmed, some Army H-13S models were outfitted with skid-mounted air-to-surface rockets and could additionally mount a pair of 0.30 caliber machine guns. Anti-tank missiles were photographed on at least one H-13, the missiles held outboard along wide spanning structural appendages. H-13 operations could also benefit from accompanying Bell UH-1 "gunships" better armed to provide covering fire and support in enemy-controlled areas.

The H-13 persevered into the Cold War years and saw extended service in the Vietnam War. At the start of the conflict, there were 861 H-13s in service. December of 1961 saw the arrival of the 8th and 57th Transportation Companies at Saigon and these were made up of OH-13E and CH-21 models. Operations continued into 1962 primarily in an observation role. H-13s were eventually superseded in the US Army inventory by the more modern Bell OH-58 "Kiowa" series of 1969.

While no longer in widespread use, some H-13 and related models still serve in an active role with militaries and civilian parties of the world.

(Showcased performance specifications pertain to the Bell Sioux AH.1 production variant. Compare this aircraft entry against any other in our database. View aircraft by powerplant type)
Typically none though some wartime variants were fielded with 2 x 0.30 caliber medium machine guns, aerial rockets, or 2 x Air-to-surface anti-tank missiles on outboard skid mountings.

Values are derrived from a variety of categories related to the design, overall function, and historical influence of this aircraft in aviation history.
Overall Rating
The overall rating takes into account over 60 individual factors related to this aircraft entry.
26
Rating is out of a possible 100 points.
Relative Maximum Speed
Hi: 120mph
Lo: 60mph
This entry's maximum listed speed (106mph).