The Douglas C-47 Skytrain was perhaps the most famous of the many transport aircraft employed during World War 2 - seeing combat service into the Vietnam War years.

Authored By: Staff Writer | Last Edited: 06/06/2019 | Content ©www.MilitaryFactory.com | The following text is exclusive to this site. 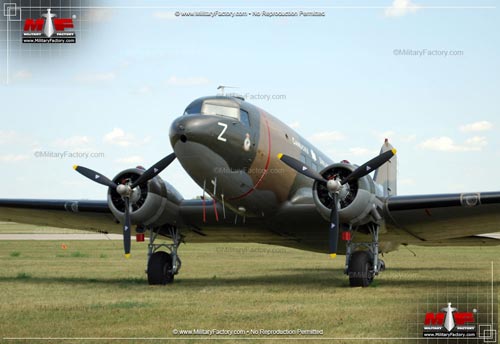 The C-47 Skytrain was a product of the Douglas Aircraft Company and achieved its first flight in prototype form on December 23rd, 1941. Earlier that same month, the United States officially committed to World War 2 after the Japanese attack on Pearl Harbor (December 7th). The C-47 transport series is regarded as the best transport of the entire conflict. The aircraft held its roots in the Douglas DC-3 passenger hauler which began operations in the 1930s, setting new levels of performance for a commercial aircraft of the period. The series would become an instrumental component of the American and Allied war effort concerning the Second World War as the C-47 entered into service during 1942 and would serve throughout the war and beyond while seeing service with a plethora of nations and in a variety of combat and peace time roles.

The product was also produced locally, under license, by the Soviet Union as the Lisunov Li-2. Total C-47 production was greater than 10,000 units before the end.

The original DC-3 was modified from commercial airliner to military transport which required some changes to her base design - the passenger cabin was revised to carry 27 combat-ready personnel in more spartan conditions. The passenger seats were removed to make room for bench-style seating where the passenger now faced centerline, seated in bucket seats. Pratt & Whitney radial engines were then added in place of the Wright "Cyclones" found in the DC-3.

Initial production revealed the original "C-47" and the name of "Skytrain" was afforded to it. No sooner were 93 examples of this base model manufactured that the line evolved to become the "C-47A" - her changes including improved electrical capacity for the various onboard systems. One of the more definitive production marks in the series was the "C-47B" which improved engine performance and this stock was earmarked for service in Southeast Asia as it offered better high-altitude capability which were required for flights to China from the U.S. The product was also developed into a trainer with the designation of "TC-47B".

Externally, the C-47 was of a fundamental form and function, exhibiting smooth rolling contours, a low-monoplane wing set, tubular fuselage, and single vertical tail surface. The two radial engines were mounted at each wing leading edge outputting 1,200 horsepower each. The pilot and co-pilot sat at the extreme front of the fuselage with an observation blister directly behind the cockpit. Entry / exit doors were situated at the forward and aft sides of the fuselage for loading troops and exiting paratroopers. In service, the design was noted for its ability to withstand extreme amounts of damage and still keep its flying qualities about her.

The C-47 appeared in similar and varied forms for the United States Navy (as the "R4D"), the British Royal Air Force (through the "Dakota" marks), the Soviet Air Force (produced by Lisunov as the "Li-2") and with Japan as the "L2D". The fleet saw consistent use up until the 1960s to which their airframes had reached or exceeded theirrecommended service lives. The C-47was known under various names besides Skytrain - "Gooney Bird" and "Old Bucket" were just two of the more notable nicknames given.

Whether in civilian or military service, the Douglas product reached a level of stardom few aircraft ever do. Its rugged and reliable design ensured it a place in military history as the platform proved to be up to the many challenges facing warplanners and became one of the more influential designs of her time.

Beyond her wartime contributions (which included time in the hands of WASP pilots as well), the C-47 played a vital role in the Berlin Airlift (1948-1949) and became an ad hoc gunship during the Vietnam War (1955-1975). For the latter, a stock of fifty-three aircraft were reworked with large caliber guns firing from portside and carried the designation of AC-47 "Spooky".

The XCG-17 was an offshhot development of the C-47 and developed as an assault glider. It only reached prototype form and first flew in June of 1944.

Some DC-3s continue to fly today.©MilitaryFactory.com
Note: The above text is EXCLUSIVE to the site www.MilitaryFactory.com. It is the product of many hours of research and work made possible with the help of contributors, veterans, insiders, and topic specialists. If you happen upon this text anywhere else on the internet or in print, please let us know at MilitaryFactory AT gmail DOT com so that we may take appropriate action against the offender / offending site and continue to protect this original work.
Advertisements

(Showcased performance specifications pertain to the Douglas C-47 Skytrain / Dakota Mk I production variant. Performance specifications showcased above are subject to environmental factors as well as aircraft configuration. Estimates are made when Real Data not available. Compare this aircraft entry against any other in our database or View aircraft by powerplant type)
None. Post-war gunship models were outfitted with miniguns for close support work.

(Not all ordnance types may be represented in the showcase above)
Hardpoint Mountings: None. 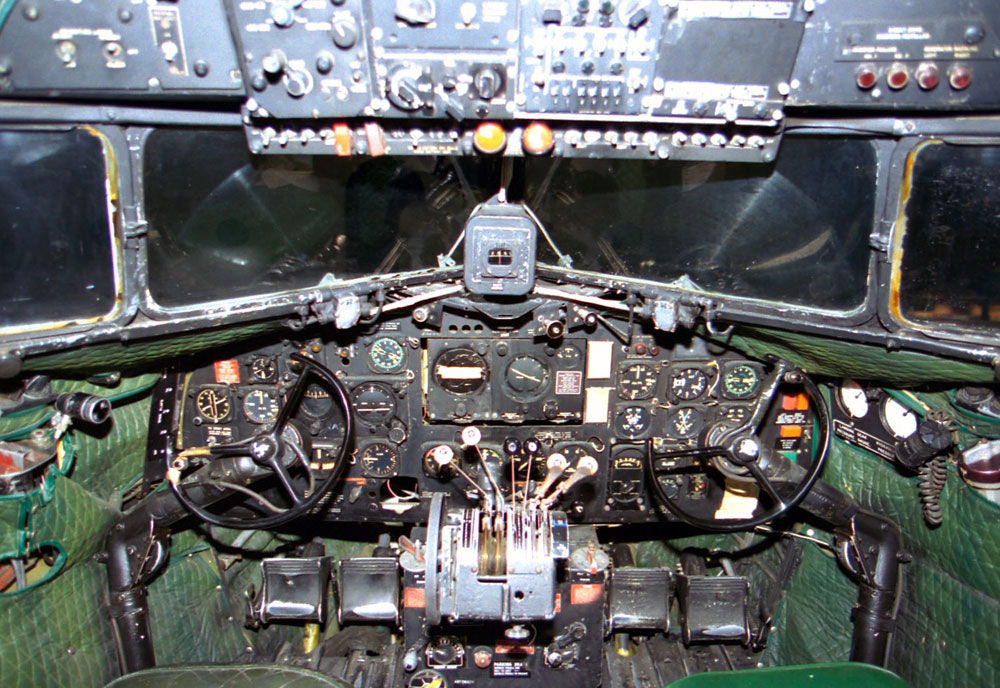 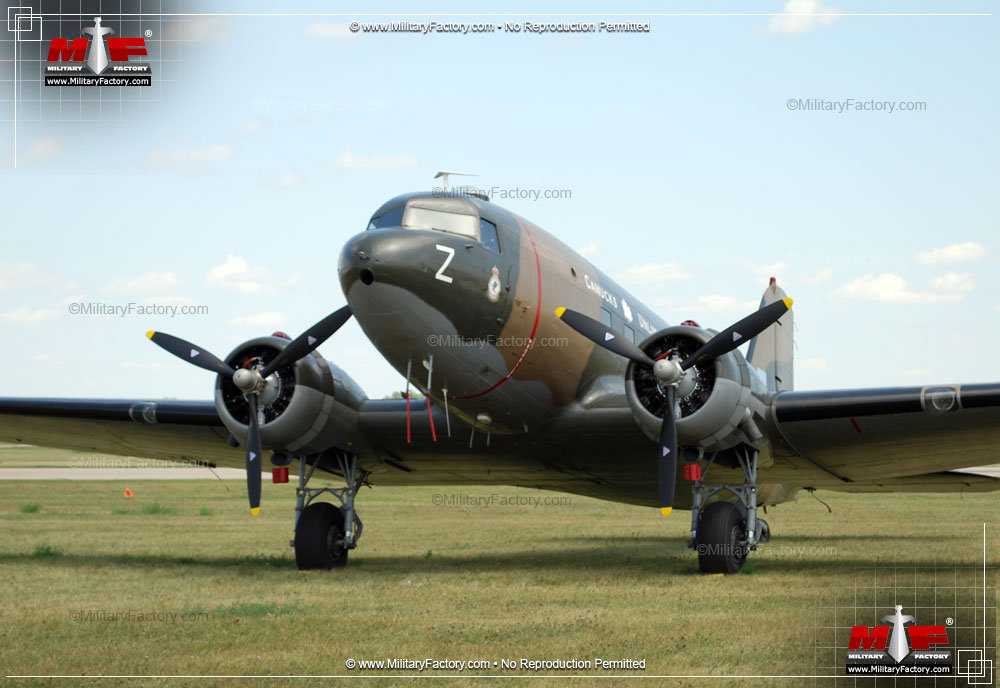 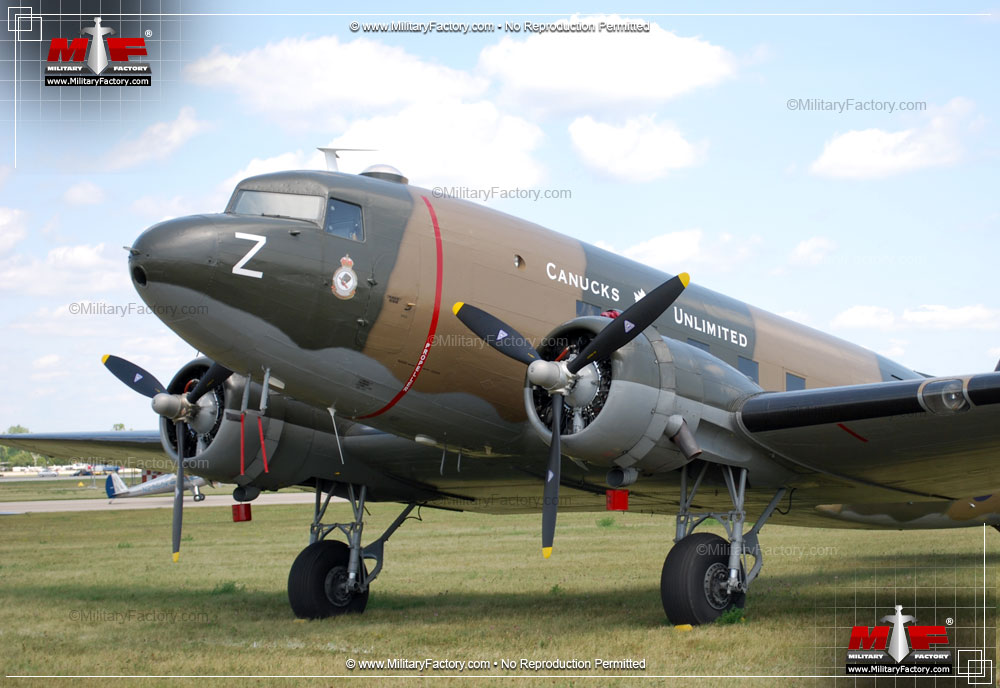 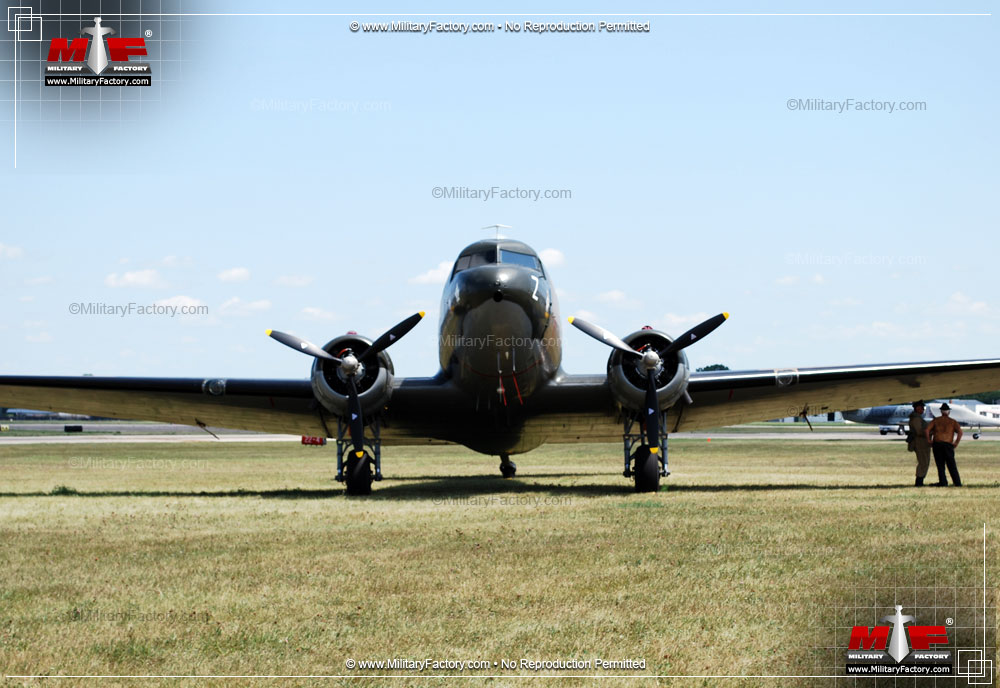 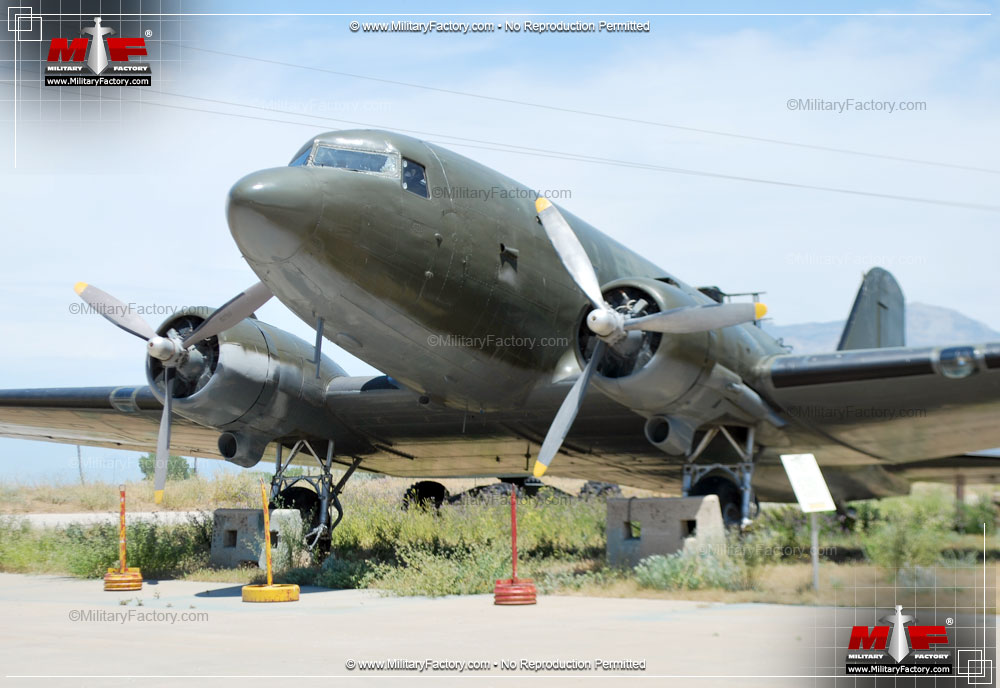 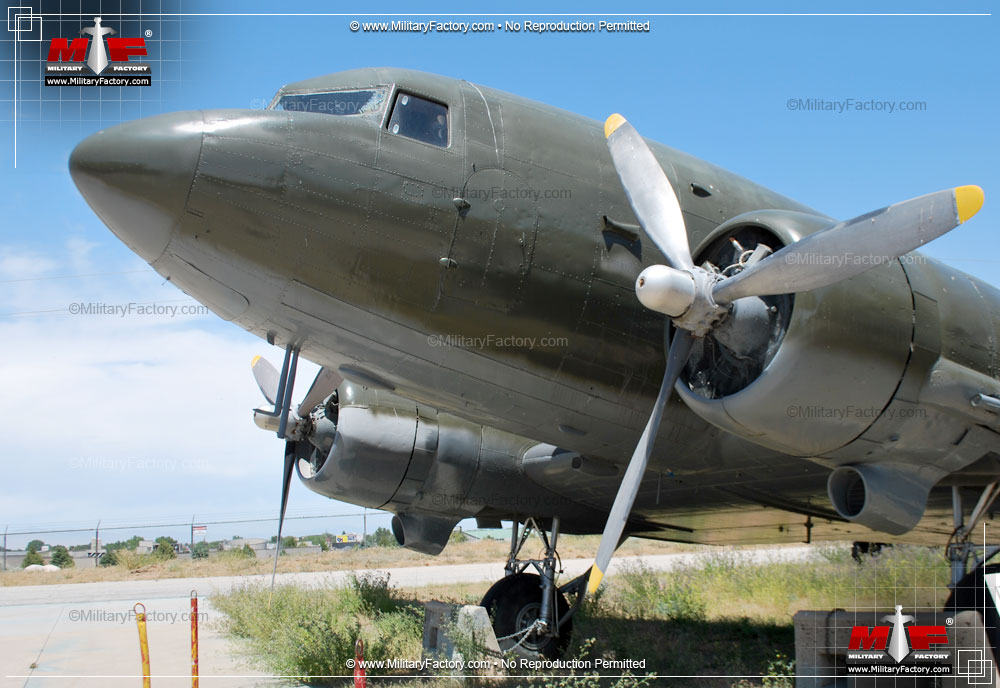 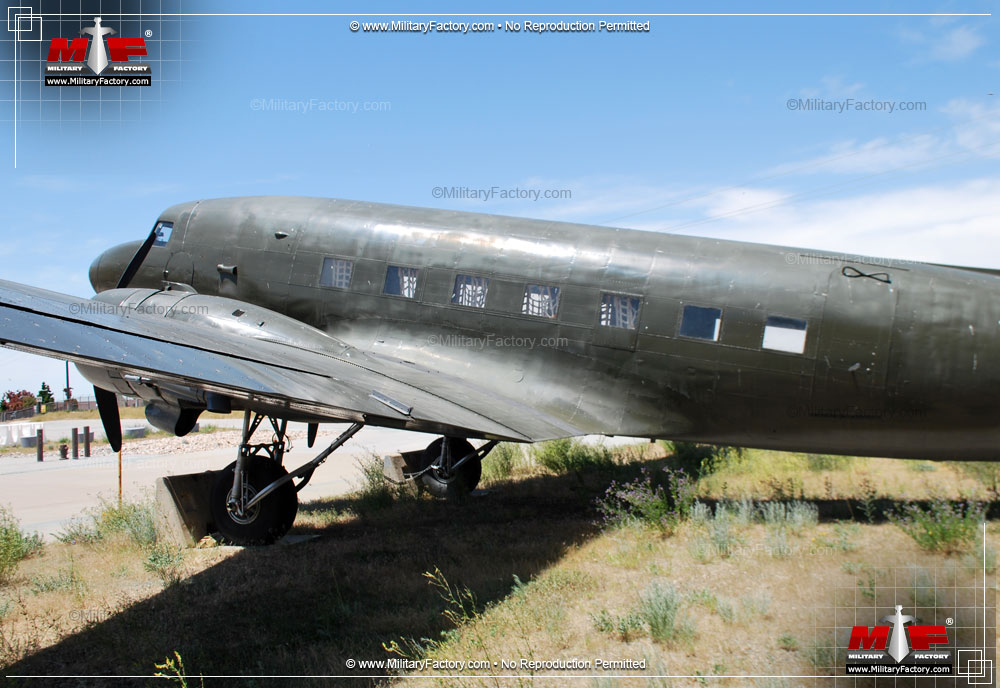 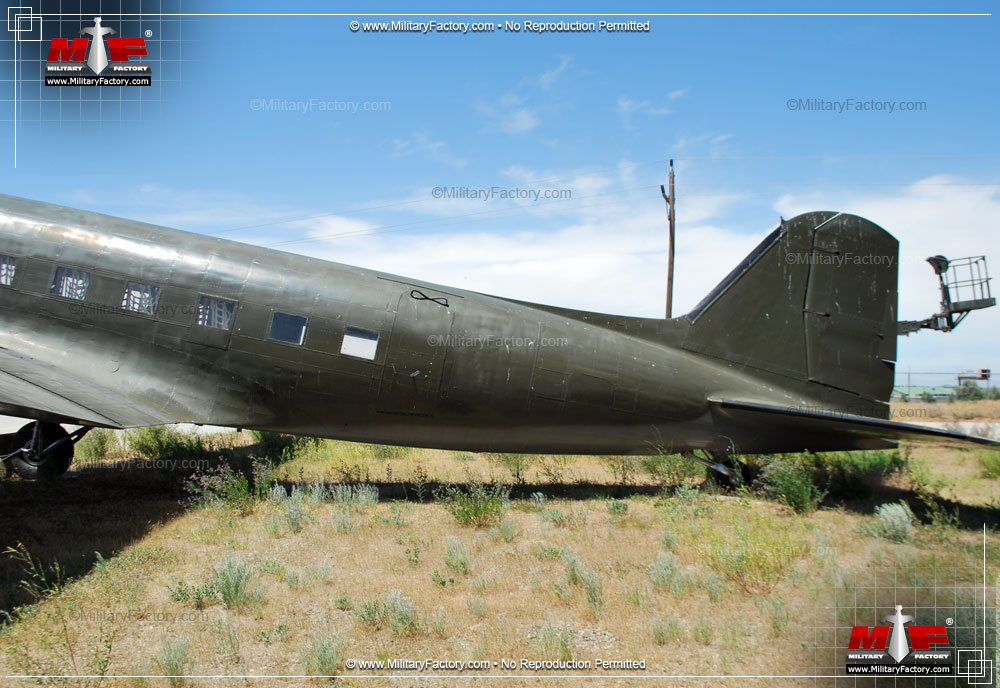 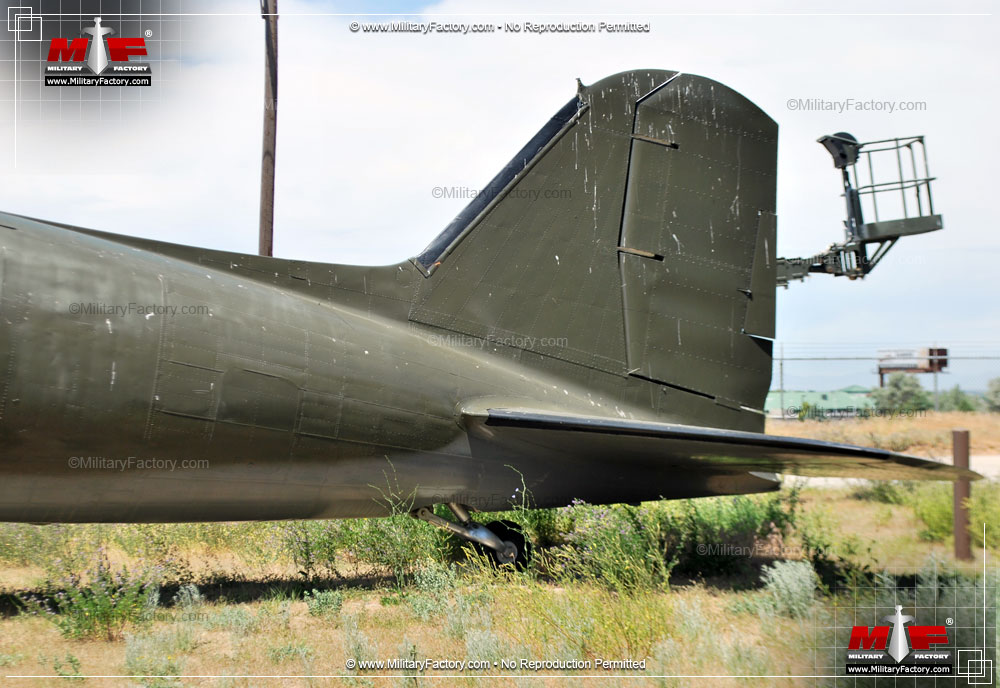 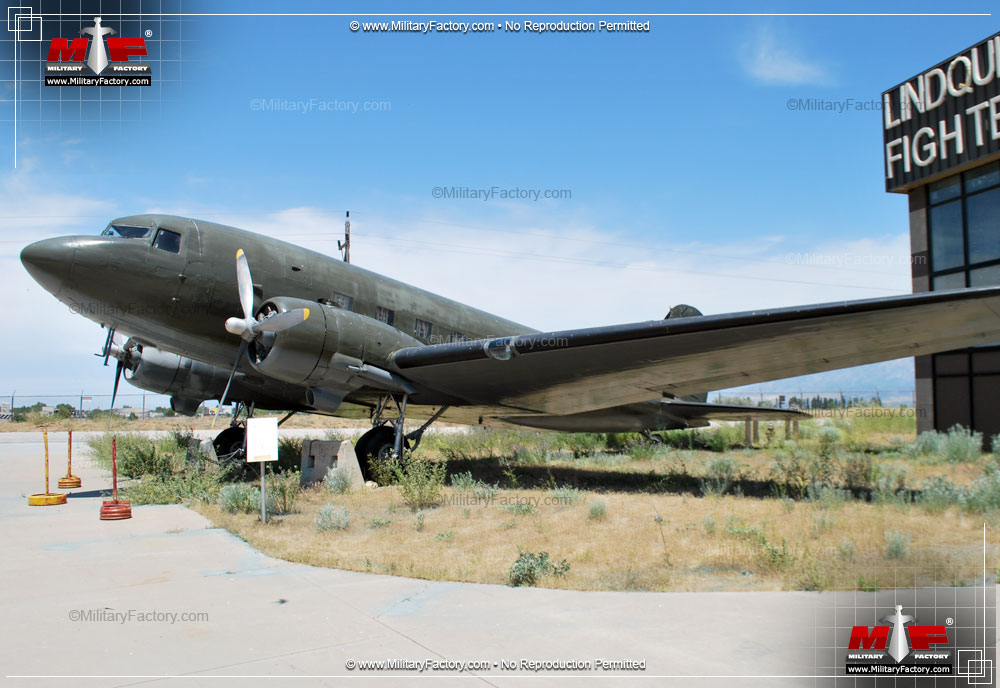 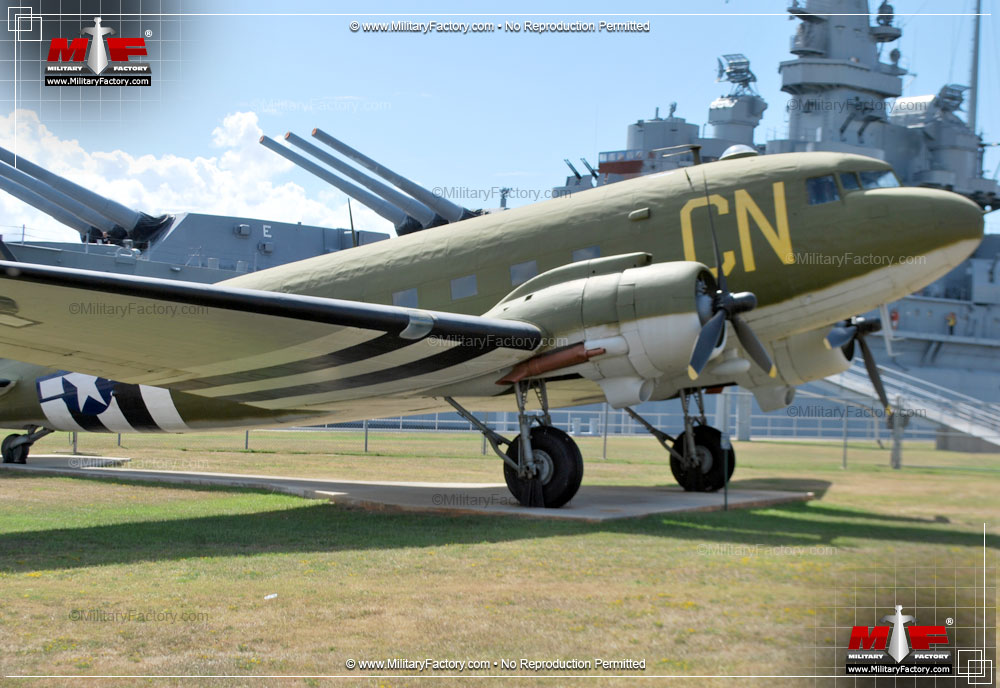 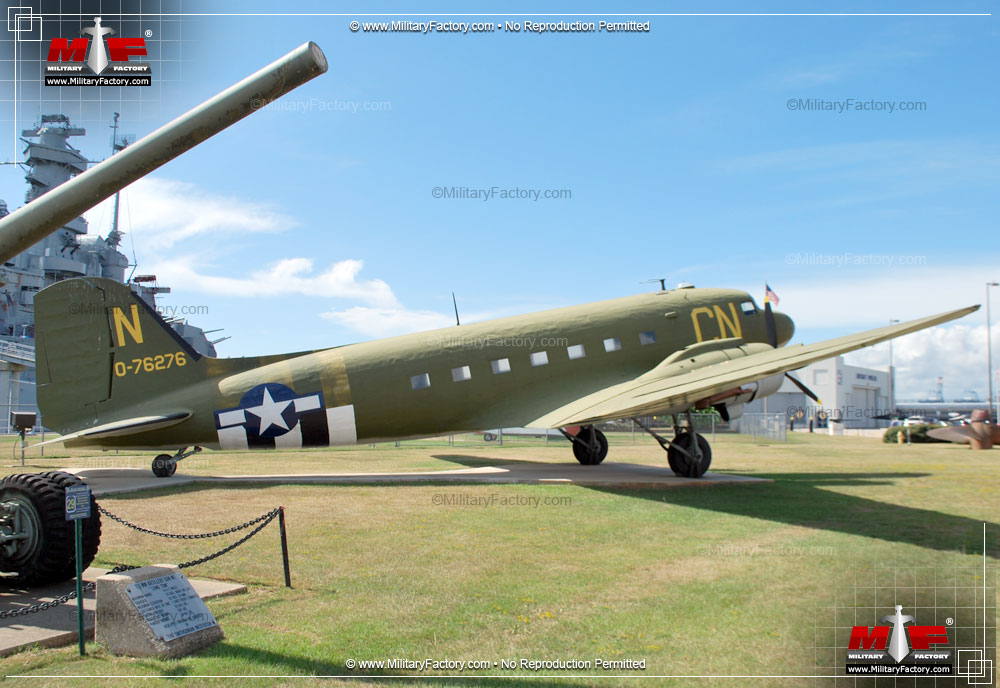 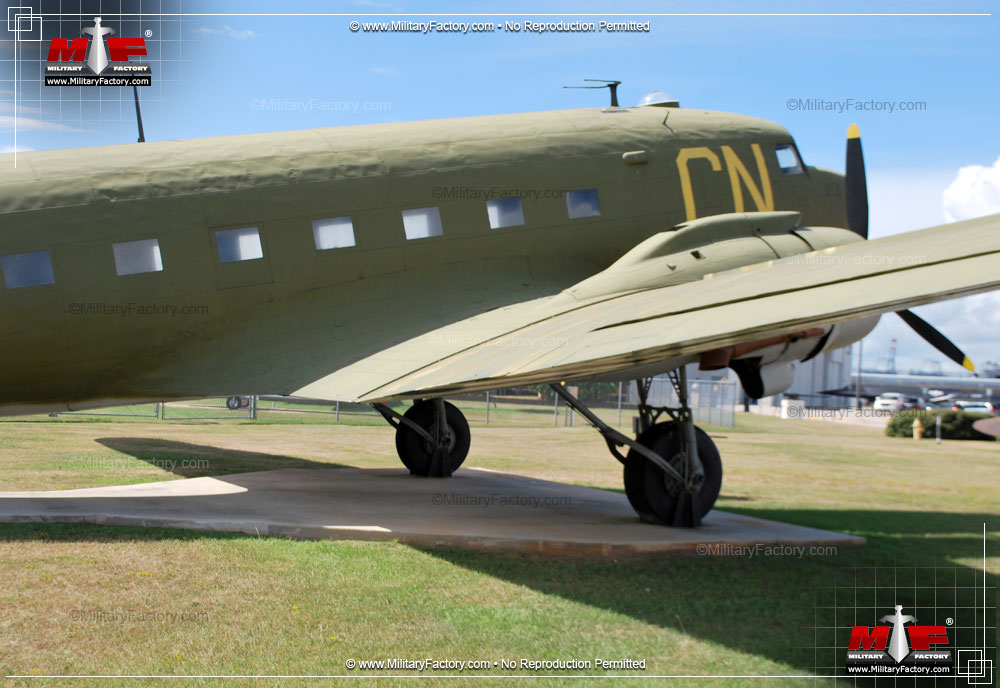 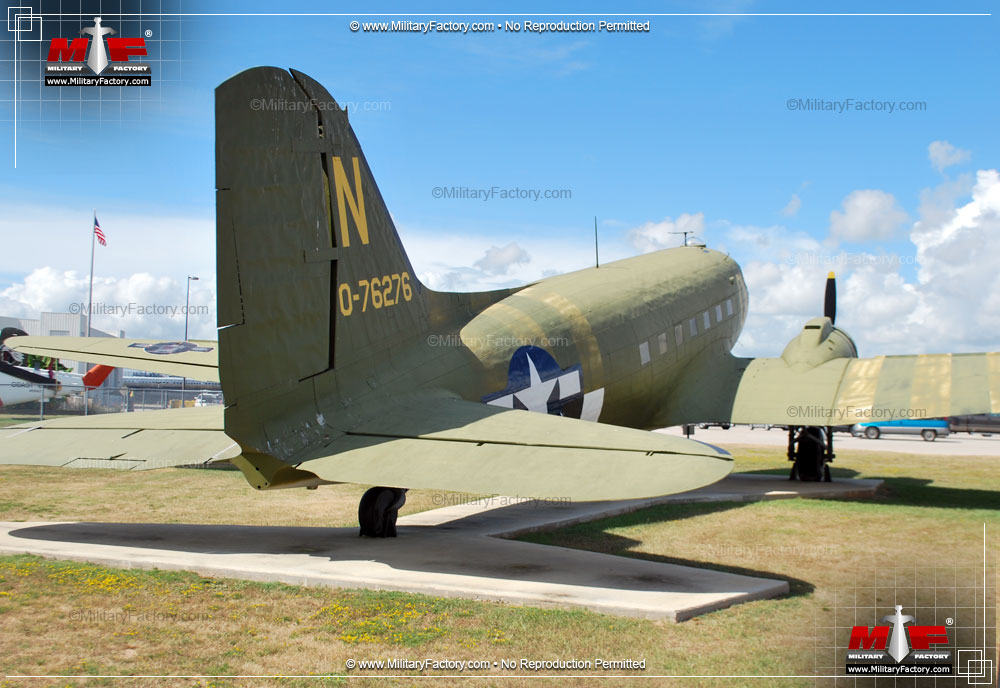 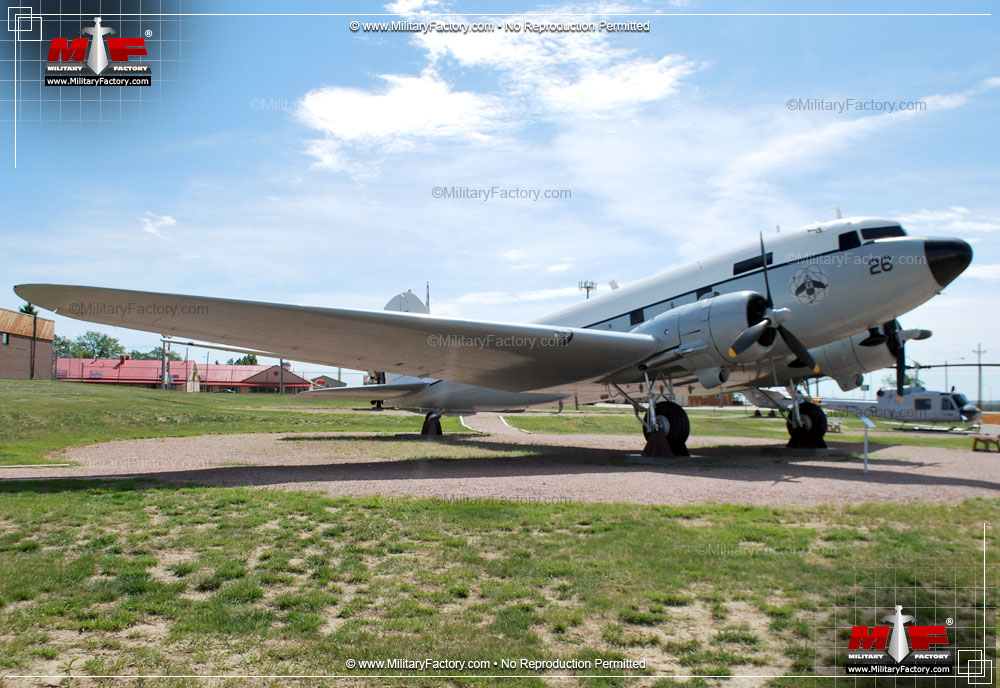 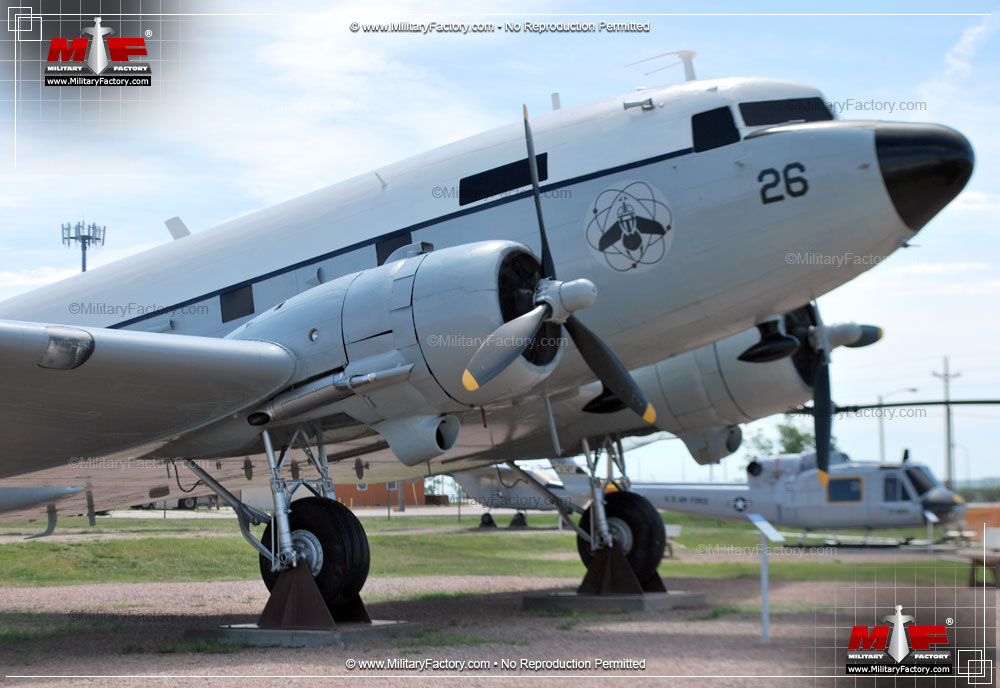