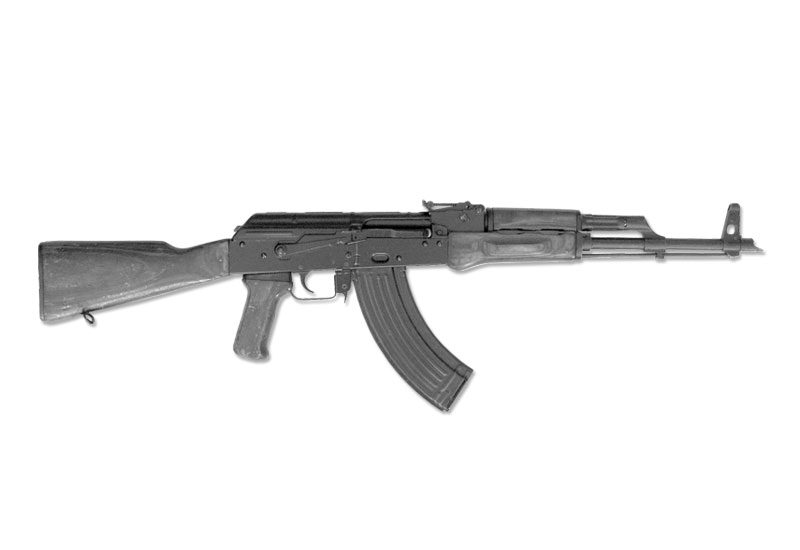 A soldier fires his AKMS assailt rifle, noted for its folding metal buttstock

The AKM was a modernized version of the successful AK-47 model and some 10.2 million were produced.

The AKM was designed in the 1950s as a modernized successor to the fabled AK-47 assault rifle series of the late 1940s. The original AK-47 began life in the latter stages of World War 2 and went on to see extensive use throughout the upcoming Cold War years after it began service in 1949. The AKM became a successful attempt at essentially reintroducing the AK-47 as an improved form that was made easier to mass produce. Efforts were made to deliver an end-product that ultimately became a lighter, easier-to-control and cheaper weapon system that could be mass produced in a shorter rate of time while still increasing reliability. As such, the AKM went on to become the most numerous of all the AK-series assault rifle variants - it being produced in some 10.2 million examples from a combined effort from Izhevsk Mechanical Works and the Tula Arsenal. In a drastic comparison showcasing the vast reach of the original, it is said that over 75 million base AK-47 assault rifles were made in all, making her one of the most successful firearms of all time - though the AKM would not reach these lofty production goals she would forge her own successful legacy in time. The AKM saw combat actions in a myriad of operations concerning the Vietnam War and other regional conflicts around Southeast Asia to follow as well as finding use in the Iran-Iraq War, the First Chechen War, the Persian Gulf War and Operation Enduring Freedom to name a few hotspots. Despite it being formally replaced by the AK-74 assault rifle line of 1974, the AKM - on some areas of the world - still remains a frontline weapons system for many nations the world over, even seeing limited use with Russian forces today. Like the original AK-47, the AKM was designed by Mikhail Kalashnikov, the iconic Soviet arms designer.

The AK-47 was a revolutionary design in her own time, owing some of her success to research from the captured German wartime assault rifle - the MP43/MP44/StG44 Sturmgewehr (meaning "Storm Rifle", leading to the use of the phrasing "Assault Rifle") - generally regarded as the "Father of Assault Rifles". Interestingly, Adolf Hitler was not keen on its design at the beginning of its development and pressured for more submachine guns to go into production. As such, StG44 development by the German Armament Office continued under the guise that it was a submachine gun to cover its true battlefield nature. While the AK-47 (and the American M16 for that matter) borrowed much of the successful concepts behind the German wartime StG44, it was mechanically a Russian design. The AK-47, despite its designation (implying the service year of 1947), was actually not formally accepted into Soviet Army service until 1949. Once operational, it proved something of a departure from the wartime implements fielded by the Soviet Union during World War 2 - weapon systems that were hurriedly shuffled out of factories in less than desirable finishes utilizing cheap construction methods to meet production goals. The AK-47 sported somewhat elegant wooden furniture at points and utilized more traditional construction techniques, having her solid steel receiver machined to form. However, this certainly proved a more expensive weapon to produce in the long run especially where "mass production" and the "Soviet Army" were concerned. As such, the assault rifle series received something of a revision by the middle of the 1950s, this to become the "AKM".

The AKM - designated with the "M" to signify its "Modernized" nature - brought construction methodology back to the more economic stamped steel to help improve production speed and lower costs. The polished steel bolt was now "Parkerized", meaning that it was protected over from corrosion and resistance through the electromechanical process of phosphate conversion coating over that of the original AK-47's polished steel. The AKM was designed to accept a bayonet system that could be converted to an in-the-field wire cutter, a presumably novel concept that came into heavy use once in practice and subsequently copied by other manufacturers thereafter. The muzzle was revised to feature a lower "lip" extension to act as a simple counterweight to combat the effects of the AK-47's notorious muzzle climb and relative uncontrollability during full-automatic fire. The wooden stock was hollowed out to further reduce weight - allowing for increased two-handed precision control on the part of the operator. The bolt carrier and bolt itself - though manufactured in a slightly different style - are said to be interchangeable with that of the original AK-47 series and the chrome-lined barrel remained intact.
Advertisements

Outwardly, the AKM followed the design of the original AK-47 quite closely. Perhaps the most identifiable fixture of the family line was the gas cylinder mounted atop the barrel assembly and its use of a long curved magazine. The rest of its general appearance was not unlike that as seen in the AK-47. The receiver was smooth with sharp, clean lines. The cocking handle was set to the right side of the body as was the ejection port. The stock was ergonomic (if wood) or skeletal (if metal), the later mounted with two hinged struts for folding. The latter version could fold its stock under the receiver for a more compact system. The rear notch sight was actually fitted ahead of the magazine feed atop the receiver. The forward post sight was mounted at the muzzle, noted for its height to compensate for the lower-set barrel. The trigger sat behind the magazine feed in the familiar Kalashnikov-style rectangular ring. The pistol grip was rather unimpressive but functional and the AKM sported wood furniture at the grip, stock (if so equipped) and at the forend/foregrip. A cleaning rod could always be identified just under the barrel. Sling loops were present along the underside of the rifle at two points, one along the stock and the other along the forend.

As the AK-47 before it, the AKM dealt from a gas-operated, rotating bolt firing action. The feed was managed with a 20- or 30-round detachable box magazine but the AKM could also make use of the 40-round box and 75-round drum magazines natural to the RPK squad-level light machine gun. The system was chambered for the standard Soviet 7.62x39mm cartridge and rate-of-fire was listed at 600 rounds-per-minute with a muzzle velocity of 2,346 feet-per-second and a maximum range out to 1,000 meters (though effective range was listed to about 400 meters). The AKM measured a running length of 880mm (stock extended, 655mm with the stock folded) with the barrel being 415mm in length for all AKM versions. The AKM could be field-stripped into five major pieces to include the lower receiver/stock/barrel, the spring, firing pin, upper receiver and the gas cylinder.

Beyond the original AKM production model, the rifle line was branched into some notable variants that only slightly deviated from the successful base design. This included the well-known AKMS model which was fitted with a metal folding stock that swung under the receiver. The AKMP sported tritium-lighted aiming sights for use of the weapon in low-level light situations. The AKML came with a side-mounted accessories rail which could hold a night vision sighting device for improved night operations. Additionally, this version could field a bipod as optional for sustained fire from a prone position. The AKMLP was nothing more than the AKML fitted with the aforementioned tritium sights. The AKMSP was based on the AKMS and its folding stock but also incorporated tritium sights. The AKMSN was also based on the AKMS and came standard with an accessories rail for the fitting of night vision devices. It also was delivered with the optional bipod for sustained fire and a flash suppressor to help conceal the operator during firing. The AKMSN also appeared with tritium sights under the designation of AKMSNP. In general, weight of the AKM and its variants ranged from 6.8lbs (as in the original design) to approximately 8.4lbs for the heavier AKML. All others ranged in between those two values.

Foreign operators, already keen on the AK series due to their communist relations or diplomatic ties to the Soviet Empire, went ahead and locally-produced the assault rifle under different designation markers and some with slightly different details. The karabinek-granatnik wz. 1974 was a Polish model with a slightly revised forend for the installation of the 40mm wz. 1974 Pallad single-shout, underslung grenade launcher. Egypt produced the AKM as an exact copy in the form of the "Misr" for their army forces. China produced the AKM under the designation of Type 56. The AKM was known in Communist East Germany as the MPi-KM. Finland maintained supplies of both the Chinese Type 56 and the East German MPi-KM and designated each as the RK 56 TP and RK 72 respectively. To go along with these versions, there were also Finnish indigenous AKM versions known as the RK 62 and RK 95 TP. Hungary copied the AKM as the AK-63 (wooden stock) and the AK-63D (metal folding stock). Bulgaria also handled local production of the AKM for their army and security forces. Pakistan used the Chinese Type 56 version and Zastava Arms of Yugoslavia produced a few AKM-based variants as the M70 and M70B series.