The DRDO Rustom series of UAVs is breaking new ground for the Indian aviation industry.

Authored By: Staff Writer | Last Edited: 09/02/2019 | Content ©www.MilitaryFactory.com | The following text is exclusive to this site. 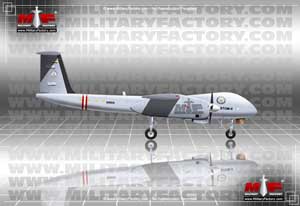 Despite being one of the largest (if not THE largest) customer of military purchases in the world, the Indian military-industrial complex has been hard at work at developing internal solutions to promote a more self-reliant Indian military inventory. DRDO (Defence Research and Development Organization) is working on the remotely-piloted "Rustom" Unmanned Aerial Vehicle (UAV) in the Medium-Altitude, Long Endurance (MALE) category with prospects for an armed version to evolve. Origins of the program date back to initiatives undertaken in the 1980s and 1990s which have since resulted in a flyable prototype achieving first flight on November 11th, 2009. The Rustom is expected to see three distinct variants as the "Rustom-I", the high-altitude "Rustom-H" and armed "Rustom-II". The Rustom-I will feature a contained mission endurance window of 12 hours while the Rustom-H is said to double that value as well as fly at higher altitudes. The Rustom-II will be the fully-featured, combat-capable UAV (more precisely, a "UCAV" = "Unmanned Combat Air Vehicle") following the form and function of the successful American "Predator" UAV line.

Outwardly, the Rustom prototype shares an appearance not unlike a Burt Rutan light aircraft design. It sports a three-legged, fixed undercarriage, rear-mounted main wing appendages and a canard wing assembly at front. Vertical fins are set at the main wing tips. The powerplant is contained in the aft section of the fuselage driving a two-bladed propeller in a "pusher" configuration. Avionics and mission equipment are housed within the forward section of the fuselage. The payload limit is listed at 165lbs while the empty airframe weighs 1,560lbs. Power is served through an American Lycoming O-320 series 4-cylinder engine of 150 horsepower.

The Rustom-H shares a wholly different physical configuration than the Rustom-I prototype as it sports mid-set, straight main wing appendages, a bulbous nose section (ala the Northrop Grumman Global Hawk), a retractable, three-legged undercarriage and a tapering empennage. The tail unit is of a conventional "T" shape with its high-mounted horizontal tailplane. The payload limit is 770lbs with an empty airframe weight of 4,000lbs while power is served through 2 x Russian NPO-Saturn 36MT series turboprop engines fitted under the wings in nacelles, these engines developing 100 horsepower each while driving three-bladed propellers. The Rustom-H is scheduled for a first flight in 2014.

The Rustom features a maximum speed value of 140 miles per hour with a range out to 220 miles (Rustom-I) and 625 (Rustom-H). The Rustom-I will operate at altitudes of up to 26,000 feet while the Rustom-H will operate closer to 35,000 feet. No specifications are currently available for the Rustom-II UCAV.

As of this writing (December 2013), the Rustom is in active development. The series is intended to replace the Israeli-originated, globally popular IAI "Heron" line of unarmed UAVs in service with the Indian Air Force and Indian Navy.©MilitaryFactory.com
Note: The above text is EXCLUSIVE to the site www.MilitaryFactory.com. It is the product of many hours of research and work made possible with the help of contributors, veterans, insiders, and topic specialists. If you happen upon this text anywhere else on the internet or in print, please let us know at MilitaryFactory AT gmail DOT com so that we may take appropriate action against the offender / offending site and continue to protect this original work.

November 2016- The Rustom-2 has completed its first-flight (November 17th).

February 2018 - The Rustom-2 product was successfully flown in a production-quality form on February 25th.

(Showcased performance specifications pertain to the DRDO Rustom-II production variant. Performance specifications showcased above are subject to environmental factors as well as aircraft configuration. Estimates are made when Real Data not available. Compare this aircraft entry against any other in our database or View aircraft by powerplant type)
Generally none for Rustom-I and Rustom-H though the Rustom-II will be an armed UCAV-type aircraft, properly armed for the role. 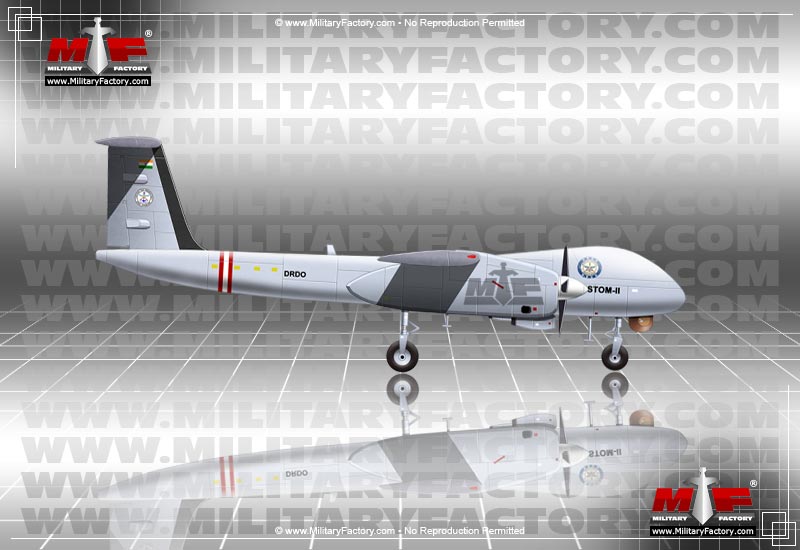