The Grumman F8F Bearcat was one of the fastest piston-engine aircraft of its time, its performance on par with early jet-powered fighters. 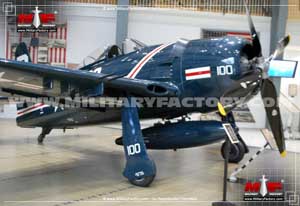 In many ways, the Grumman F8F Bearcat was the pinnacle of United States piston-engine fighter design. The aircraft arrived within the waning months of World War 2, missing combat action in all theaters altogether, but still managed to leave a legacy of power and performance even with the advent of the jet age. Its powerful Double Wasp radial piston engine and thoughtful design made for an excellent aircraft and one is left to his/his imagination as to the impact such a fighter would have had would it have shown up in time for combat in history's greatest airborne confrontations.

Grumman had a fighter aircraft history spanning back to the early 1930's. Grumman found success early in the war with its over-achieving F4F Wildcat fighter - the fighter that withstood the brunt of Japanese aggression surprisingly well until the formidable and classic Grumman F6F Hellcat was made ready in quantity. With this type of pedigree, Grumman's attempt to improve on their "cat" series was an inevitability and the F8F Bearcat would not disappoint except that when it was made ready, there was no more war to fight.

The Bearcat was born out of a specification requiring an interceptor aircraft designed around the powerful Pratt & Whitney R-2800 Double Wasp series radial piston engine (incidentally the same engine series powering the F6F Hellcat and the twin-engine F7F Tigercat). The aircraft would have to fit this engine into the smallest possible frame with every attention paid to the aircraft's overall weight. The resulting design succeeded in all fronts, culminating in an end-product proportionately better than the previous Grumman offerings.

The initial Grumman Company designation for the aircraft was G-58 (originating from Design 58, a report compiled by Grumman test pilot Bob Hall to Grumman President Leroy Grumman after his experiences in a captured German Focke-Wulf Fw 190) and was designed to succeed the F6F Hellcat series. Early forms of the Bearcat existed in this form and became two G-58A civilian-targeted systems, one for Major Alford Williams and owned by the Gulf Oil Company and the second owned by Grumman for demonstration purposes. The initial prototype became the XF8F-1, of which two were produced, and flew on August 21, 1944. Total design time for the Bearcat, from vision to air-worthy product, spanned just nine months.

When compared to the Hellcat, the Bearcat proved a much smaller design with better storage and use on the US Navy's aircraft and escort carriers. The Bearcat also exhibited better deck handling and performance far better than the Hellcat. The new design proved 20 percent lighter, about 50 miles per hour faster and had a 30% better rate-of-climb than its Hellcat brethren. Maneuverability and low-altitude performance were noted strong points of the aircrafts design.

Design-wise, the Bearcat appeared quite the conventional piston-engine aircraft. Wings were low-wing monoplanes like the F6F before it. Unlike her predecessors, however, the F8F did away with the "razorback" raised rear fuselage styling and featured bubble canopy, affording the pilot unparalleled views in all directions - a vital part of the dogfighting success formula. The cockpit was situated well in the middle of the design and was armored as was the radial piston engine was encased in a sleek forward section, contoured into a slim fuselage shape. The empennage was conventional with a single vertical tail fin and horizontal planes. The undercarriage was fully retractable (including the tail wheel) with the main landing gears retracting towards the fuselage centerline in the wings. The main landing gears were of a purposeful length as the oversized propeller component necessitated this design element. Machine gun (and later) cannon armament and external stores were all located on the wings. One distinct design characteristic of the Bearcat series was in the selection of the Aero Products four-blade propeller of considerable size (over 12 feet!), adding to the menacing look that the aircraft exuded when at rest. Construction featured spot welding and flushed rivets.
Advertisements

The XF8F-1 prototypes gave birth to the first production Bearcat model designated as the F8F-1. This model featured folding wings - now a requirement of carrier-based aircraft the world over - self-sealing fuel tanks (another requirement of fighter aircraft) and a retractable tailwheel unit. Power was supplied by the Pratt & Whitney company and their outstanding R-2800-34W Double Wasp series of radial piston engines. This initial Bearcat was slightly slower than the wartime high-performance Vought F4U Corsairs but offered up excellent handling characteristics and a better rate-of-climb. Interestingly, armament was limited to only 4 x 12.7mm heavy machine guns but this was necessitated by the project design goals to cut weight at every corner. Bearcat F8F-1 models were also produced under the General Motors Company banner with these being designated as F8M-1's. F8F-1's became available in February of 1945 with the first squadron - VF-19 - made operational on May 21st of that year. Despite its late entry into the Second World War, a conflict it had arrived too late to see any service in, the Bearcat went on to provide many faithful years of service to the US Navy. In fact, no fewer than 24 Bearcat squadrons would see operational status during the Bearcat's reign.

The Bearcat was produced in a handful of conventional variants. The F8F-1 model spanned into a new production model known as the F8F-1B. These were essentially similar to their forerunners but were upgraded in the armaments department with a collection of 4 x 20mm, a vast improvement over the initial 4 x 12.7mm machine gun armament. The F8F-1 was later refurbished and exported to France (as 100 examples) and Thailand (from 100 to 150 examples depending on the source) under the F8F-1(D) designation and also appeared as a night-fighter in the XF8F-1N prototype (of which two were constructed) and the production F8F-1N, these being fitted with the APS-19 radar system.

Inevitably, the initial design held more promise than it displayed and a new improved model was worked on in the XF8F-2 Bearcat prototype, a total of two aircraft being constructed. The XF8F-2 appeared in production form beginning in 1948 with a Pratt & Whitney R-2800-30W radial piston engine and 4 x 20mm cannon armament as standard. Changes in this new model also included a taller tail fin with associated enlarged rudder component and a revised engine cowling. At least 293 of the F8F-2 series would see production.

Like the Bearcats before it, the F8F-2 was spawned into a night-fighter platform in the F8F-2N. Like the F8F-1N before it, the F8F-2N also sported the APS-19 radar system. The F8F-2P became a photo-reconnaissance model outfitted with camera and associated equipment. Two 20mm cannons were retained from her fighter origins. The end of the Bearcat production line was in sight as the type was being phased out by 1952. As fate would have it, several became undistinguished drone control aircraft from converted F8F-1 and F8F-2 models designated as F8F-1D and F8F-2D respectively.

The F8F Bearcat proved no slouch in the performance department. A maximum speed of 421 miles per hour was possible along with a rate-of-climb topping 4,570 feet per minute. The aircraft's service ceiling maxed out at 38,700 feet while range was limited to 1,105 miles. In fact, Bearcats were noted for outperforming even the earliest of jet-powered designs, such was the designs success.

Beyond the original 4 x 12.7mm machine gun armament and the later 4 x 20mm cannon armament, the Bearcat featured provisions for 4 x 5" unguided rockets along with 1,000lbs of bombs. Its low-level performance and handling capabilities made the Bearcat a natural and lethal close-support aircraft.

The only operators of the Bearcat (along with the United States Navy) became France, Thailand and South Vietnam. Some 1,266 Bearcats would eventually be produced. Today, a handful of air-worthy Bearcats survive and are used in airshows and races. Bearcats were eventually replaced in USN service by the jet-powered McDonnell F2H Banshee and Grumman F9F Panther series. France utilized the Bearcat in its war in Indochina. Surviving French Bearcats were eventually passed on for service into the newly-formed Vietnamese Air Force beginning in 1955.

(Showcased performance specifications pertain to the Grumman F8F-1B Bearcat production variant. Compare this aircraft entry against any other in our database or View aircraft by powerplant type)
INITIAL:
4 x 12.7mm machine guns

General Assessment
Firepower
Performance
Survivability
Versatility
Impact
Values are derrived from a variety of categories related to the design, overall function, and historical influence of this aircraft in aviation history.
Overall Rating
The overall rating takes into account over 60 individual factors related to this aircraft entry.
88
Rating is out of a possible 100 points.
Relative Maximum Speed
Hi: 500mph
Lo: 250mph
This entry's maximum listed speed (421mph). 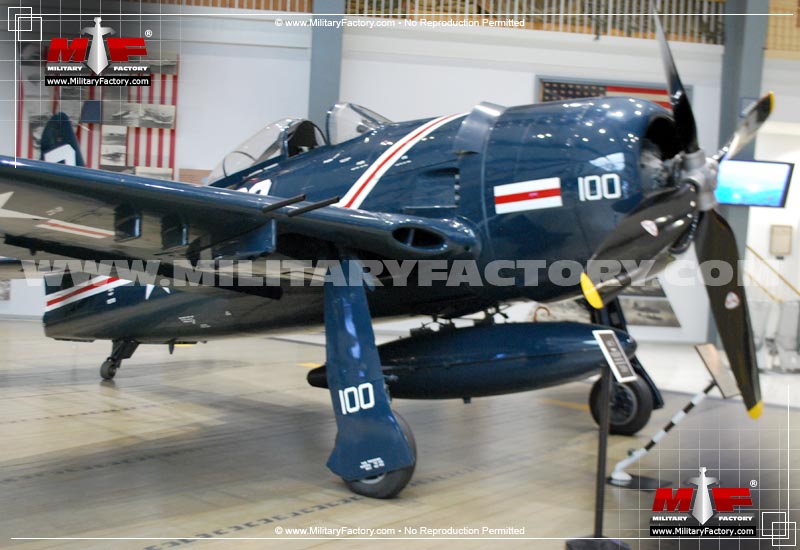 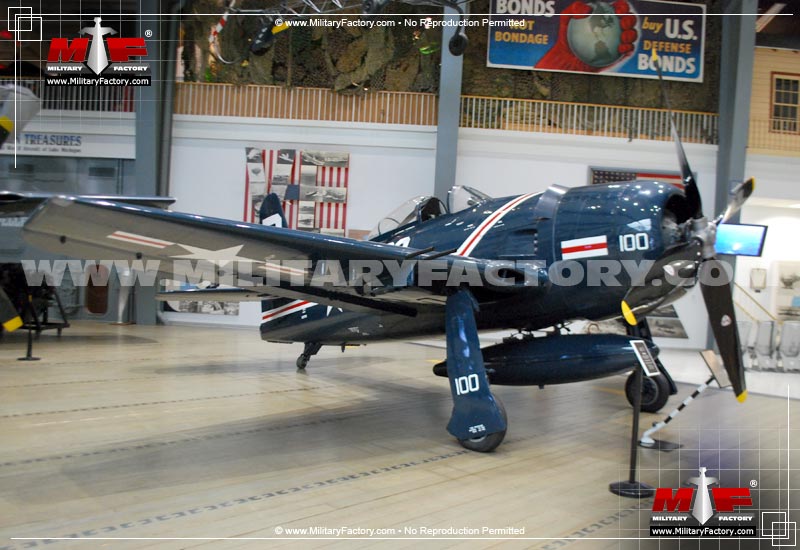 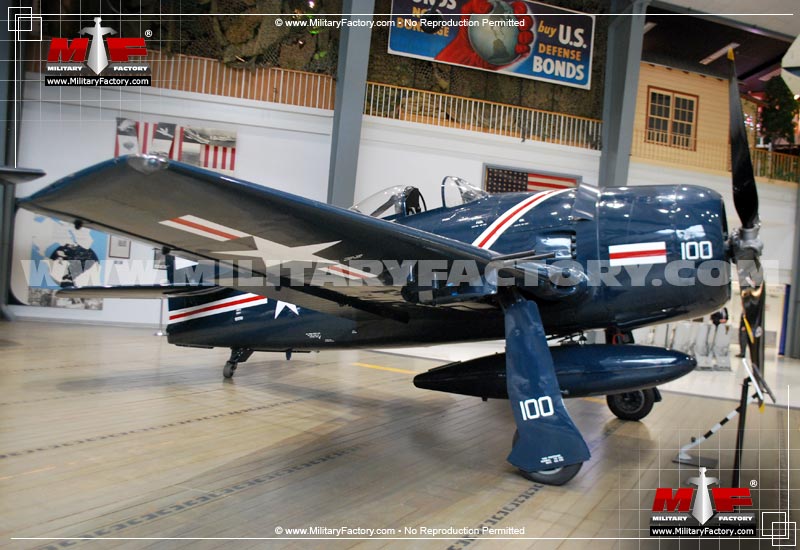 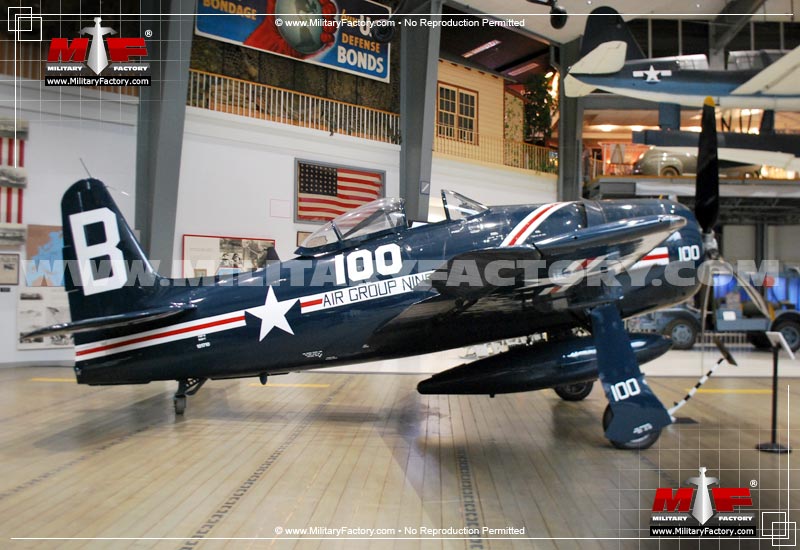 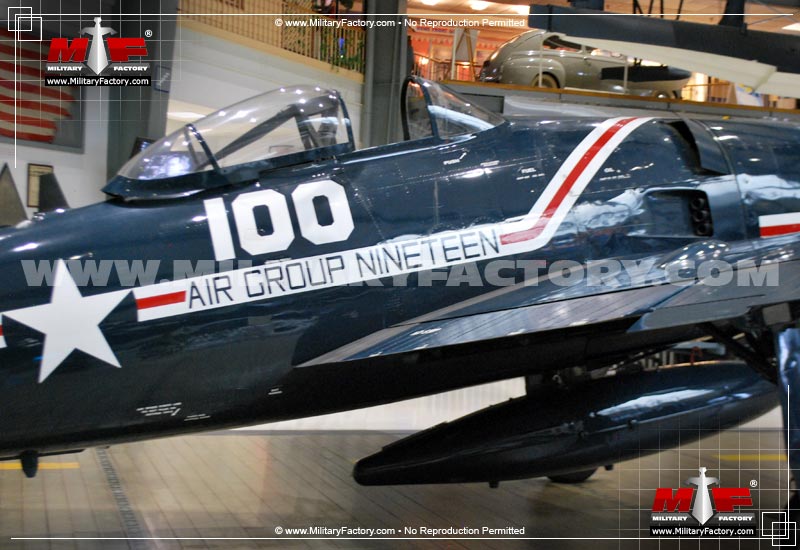 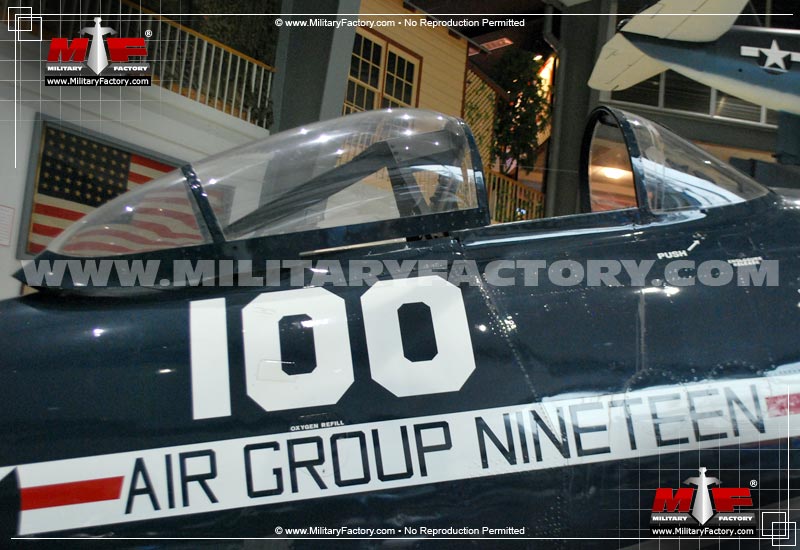 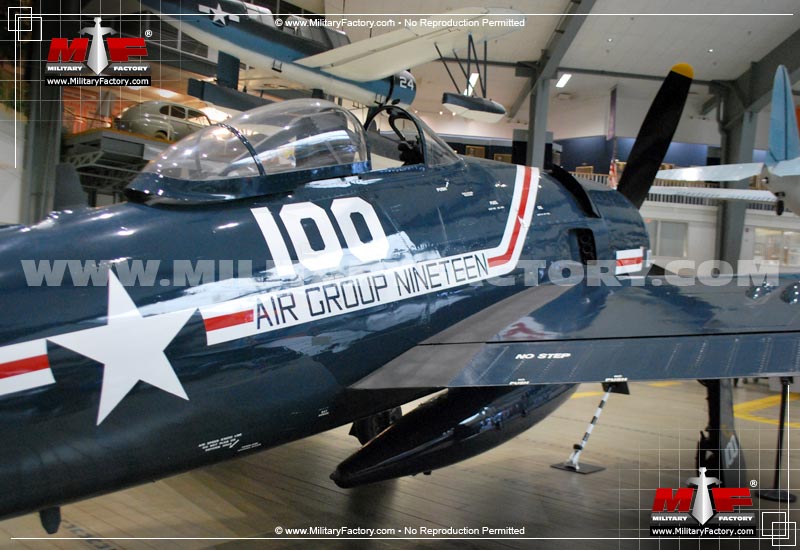 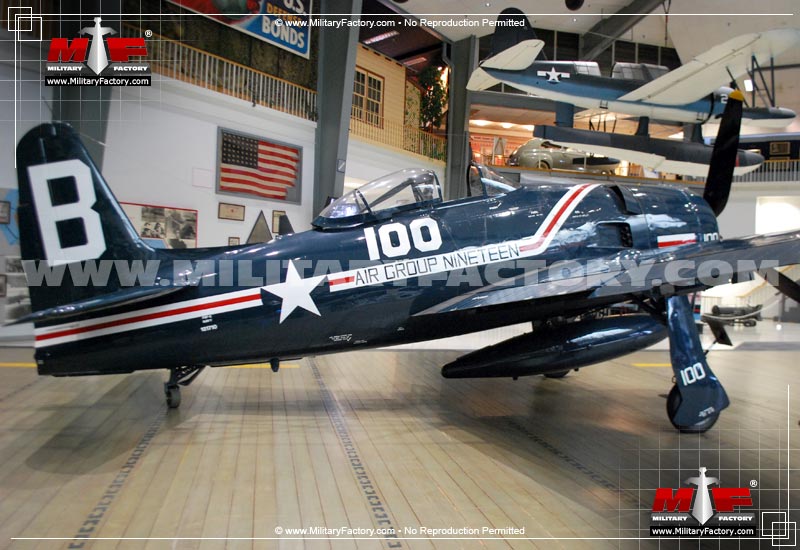 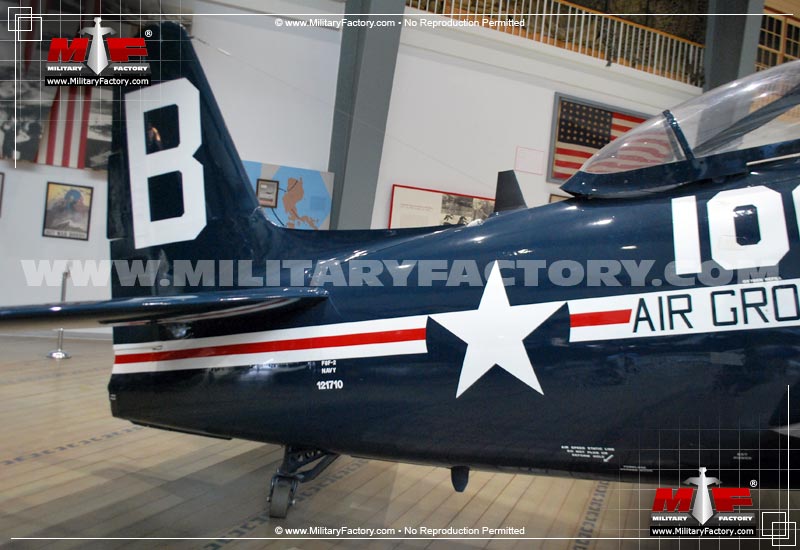 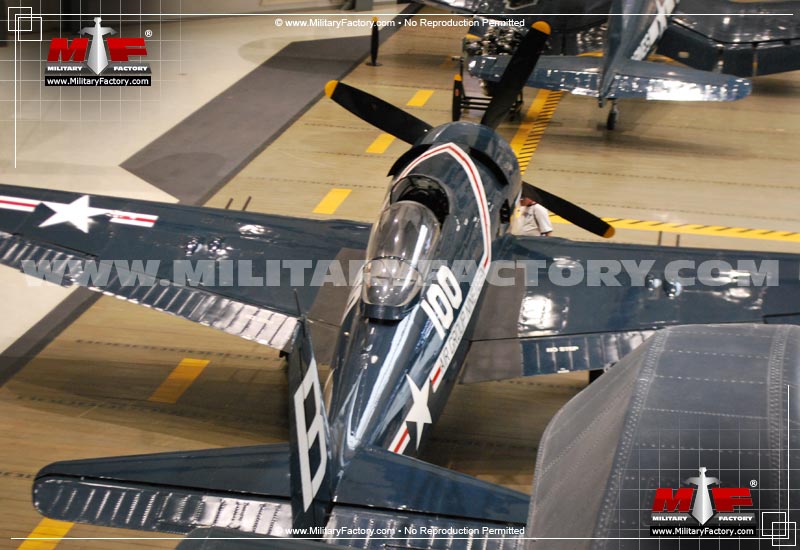 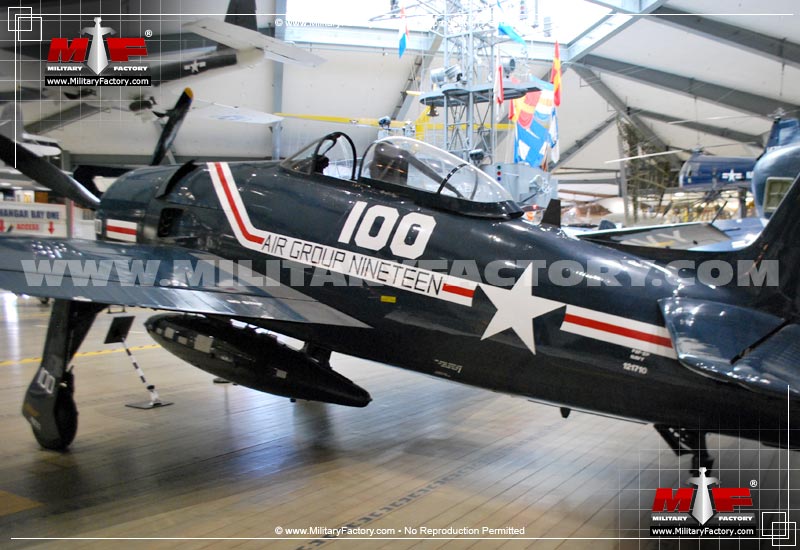 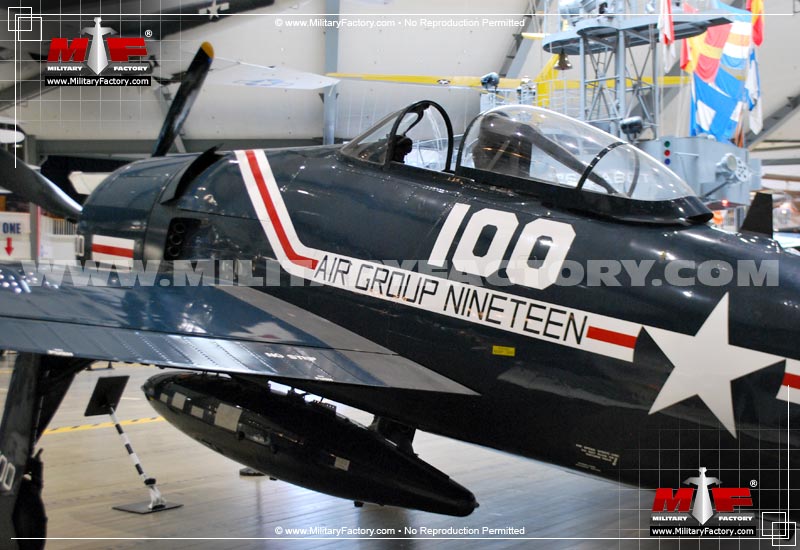 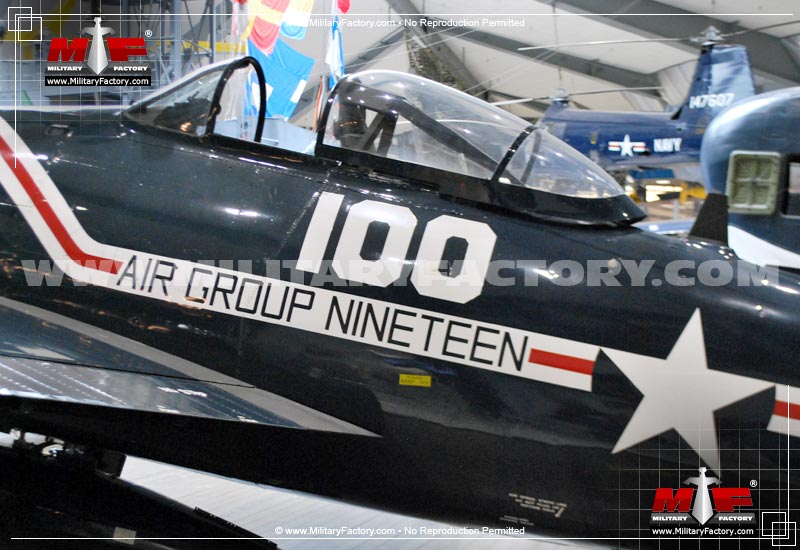 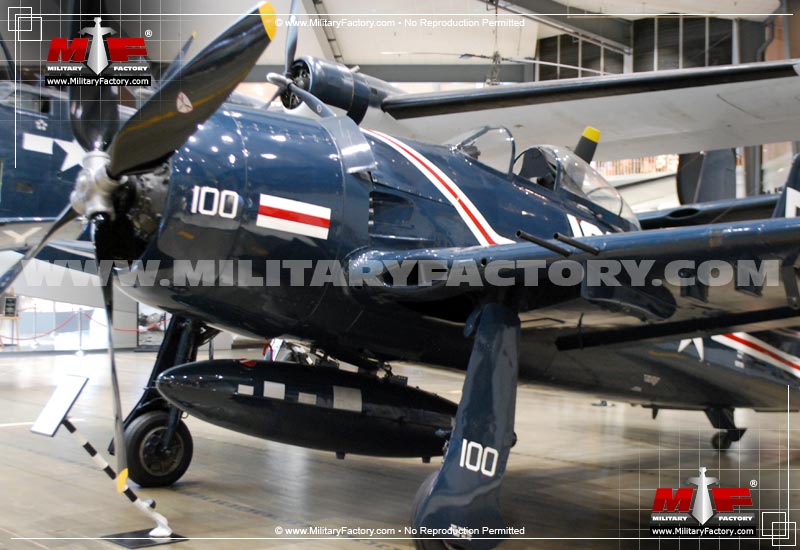 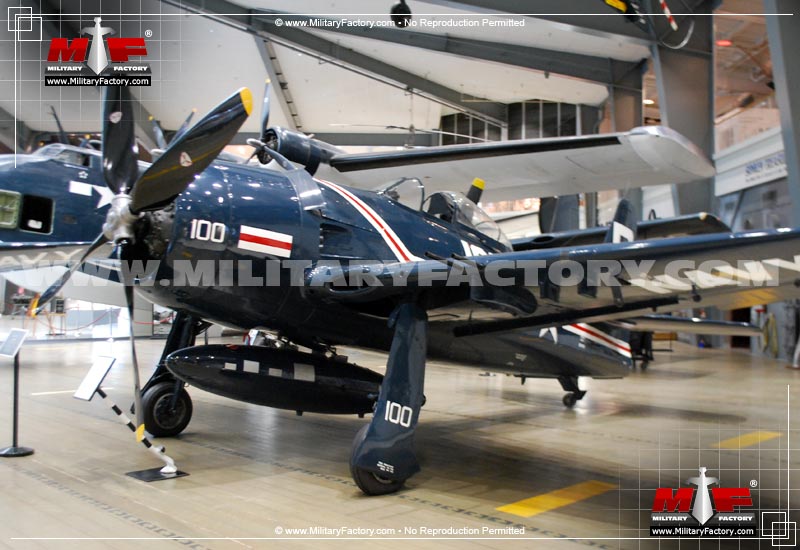