The Shenyang J-6 was nothing more than a direct copy of the Soviet-era Mikoyan-Gurevich MiG-19 Farmer jet-powered fighter. 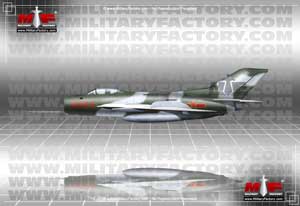 For decades China, and its regional allies, relied on the availability of their Shenyang J-6 series (NATO codename of "Farmer") of jet aircraft. The type was nothing more than a license-production copy of the short-lived Soviet Mikoyan-Gurevich MiG-19 "Farmer" that replaced the venerable MiG-17 "Frescos" then in service. The J-6 stocked the ranks of the PLAAF in some number with other quantitative operators of note becoming Pakistan and North Korea. In all, some 15 nations procured the aircraft as their first-line fighter, a budget alternative to the more expensive Soviet model. To date, Iran, Myanmar and North Korea still make use of the type, albeit in greatly diminished numbers than previously experienced. The PLAAF has since discontinued use of the aged fighter design though still retains over 100 trainer examples to educate new generations of Chinese fighter pilots. At one point, the J-6 represented the most numerous of all the available PLAAF combat-oriented aircraft and also served as the starting point for the Nanchang Q-5 "Fantan" strike fighter detailed elsewhere on this site.

Technically, the supersonic-capable J-6 was categorized as both a dedicated fighter and a ground attack aircraft. However, the system was designed with the former as primary with the latter as secondary. As a Chinese copy of the Soviet version, the J-6's design resembled that of the MiG-19 to a high degree complete with a nose-mounted air intake, dual engine arrangement, highly-swept wings with large boundary layer fencing and a single vertical tail fin. From the beginning, the J-6 was intended as a short-lived fighter development to be made available in quantity to the PLAAF and other interested parties.

The Chinese concern of Shenyang worked with Soviet engineers to begin production of the MiG-19P radar-equipped interceptor with the first such aircraft flying on December 17th, 1958 under the designation of "Shenyang J-6". In 1961, the Shenyang J-6 was formally introduced for service in the PLAAF and Shenyang was joined by Nanchang in production of the MiG-19S dedicated day fighter model. However, national budget cuts meant that these early aircraft were often completed to a low standard and numbers were slow to accumulate. By 1966, the political situation had stabilized enough that production was back online and the MiG-19S variant was now beginning to meet quality expectations. An indigenous interception radar was also then developed to allow the Chinese to produce the MiG-19P equivalent as an "all-Chinese" effort without having to rely on much Soviet help in their construction. Production of the J-6 spanned from 1958 to 1981 and an export family class variant soon emerged, this designated as the "F-6".

The engine of choice for the J-6/F-6 became a Chinese copy of the Tumansky RD-9B series afterburning turbojet engines fitted side-by-side in the middle-to-aft fuselage. In Chinese nomenclature, this engine received the designation of "Liming Wopen-6A" and offered up to 8,267lbs of thrust each with afterburner available for short, high-speed bursts. The aircraft was filled with nearly 4,000lbs of fuel and could reach speeds of 960 miles per hour, field an operational range of 1,375 miles, reach a service ceiling of 58,700 feet and climb 35,425 feet per minute. All told, the Chinese respected the type's inherent agility and performance specifications when modernizing its fighter fleet and felt the aircraft packed enough of an offensive punch to meet their needs.

Outwardly, the J-6 mimicked the MiG-19 to a tee. Its split-nose mounted intake aspirated the twin engine facilities and a pair of highly swept wings were fitted at shoulder height on the fuselage sides. The cockpit was held well-forward in the design with adequate views while the empennage was characterized by its single vertical tail fin and swept horizontal planes, these fitting anti-flutter weights at their tips. The engines exhausted from a single exhaust ring under the rudder. The undercarriage was fully retractable and gave the design a pronounced "nose-up" appearance when at rest. All landing gear legs were single-wheeled with the main legs retracting inwards under the wing roots and the nose leg retracting forwards under the cockpit floor. A perforated airbrake panel was identified along the belly section of the fuselage. Standard armament included 3 x 30mm NR-30 cannons arranged as 2 x wing root mounts and 1 x lower fuselage mounts. The wing guns managed 70 rounds of ammunition while the fuselage mount was afforded 55 rounds. Beyond the cannons, the J-6 could field rocket pods for unguided rocket launching, conventional drop bombs and air-to-air homing missiles - all ordnance to be held across underwing pylons numbering four.©MilitaryFactory.com
Advertisements

Production of the J-6 began with the base J-6 designation, this formed from the Soviet MiG-19S production model and appearing only after the J-6A entered production. The J-6A - following in line with the MiG-19P - proved of very low quality and, thusly production was stopped until the facilities were reworked to produce a more suitable end product - such help was supplied from engineers of the Soviet Union. A second J-6A batch, based highly on the MiG-19PF, was therefore delivered and these were formally accepted by the PLAAF. The export version of this mount was known as the "F-6A" and all were finished with an integrated intercepting radar facility as well as twin 30mm cannons for close-in work.

The J-6B production model followed the Soviet MiG-19PM design and was categorized as a dedicated interceptor. These had the capability to field a pair of PL-1 short-range air-to-air missile (copies of the Soviet "AA-1" missile series). However, production of this type was limited to just 19 examples so its reach was very limited. The J-6C then followed and was the first version fitting a 3 x 30mm cannon arrangement as opposed to the original's two. The J-6C was known in the export market as the "F-6C". A dedicated reconnaissance form of the J-6 was also developed, this incorporating a camera pack in place of the fuselage cannon fixture and marketed as the "JZ-6", exported as the "FR-6".

A two-seat trainer derivative of the J-6 fighter emerged as the "JJ-6". The type introduced a second cockpit (in tandem) with overriding redundant controls in a lengthened fuselage, less some fuel. The three-cannon arrangement was reworked to incorporate just a single fitting for armed gunnery training. The JJ-6 was exported as the "FT-6" to interested parties and local production was also served through the Tianjin concern. The JJ-6 airframe also served as a testbed for an indigenous ejection seat design. Similarly, the Xian BW-1 became a fly-by-wire developmental airframe to test out an indigenous Chinese flight system. The Guizhou concern delivered the J-6A model designation that held capabilities for the launching of a pair of PL-2 IR air-to-air missiles.

Operators of the J-6/F-6 (beyond China) became Albania, Bangladesh, Cambodia, Egypt, Iran, Myanmar, North Korea, North Vietnam, Pakistan, Somalia, Sudan, Tanzania and Vietnam. The F-6 proved acceptable to the budget conscious shopped looking for a modern fighter platform and the Chinese product did not disappoint. Pakistan enjoyed widespread use of the type and fielded it across no fewer than ten squadrons including a training group. Nearly all were retired by 2002 and replaced by the Chengdu F-7 series - the Chinese copy of the Soviet MiG-21 "Fishbed". Albania managed 82 F-6 platforms which was a considerable amount - all these having been retired as of 2005. To date, only Iran, Myanmar and North Korea still operate the F-6 export model.

J-6 fighters in Chinese service were formally removed from frontline service by 2005 with some modified for the miserable post-operational life of target drone. However, many of the two-seat trainer derivatives (over one hundred examples at least) were retained for jet pilot training. However, even these are continuing to see active replacement by the more capable and modern Hongdu JL-8 series.

In all, over 3,000 J-6/F-6 airframes were completed by Shenyang and others.©MilitaryFactory.com
Note: The above text is EXCLUSIVE to the site www.MilitaryFactory.com. It is the product of many hours of research and work made possible with the help of contributors, veterans, insiders, and topic specialists. If you happen upon this text anywhere else on the internet or in print, please let us know at MilitaryFactory AT gmail DOT com so that we may take appropriate action against the offender / offending site and continue to protect this original work.
Advertisements

(Showcased performance specifications pertain to the Shenyang J-6 (Farmer) production variant. Performance specifications showcased above are subject to environmental factors as well as aircraft configuration. Estimates are made when Real Data not available. Compare this aircraft entry against any other in our database or View aircraft by powerplant type)
STANDARD:
1 x 30mm NR-30 cannon in lower forward fuselage
2 x 30mm NR-30 cannons in wingroots

OPTIONAL:
Up to 550lbs of ordnance including air-to-air missiles (Chinese versions only), rocket pods (unguided) and conventional drop bombs. 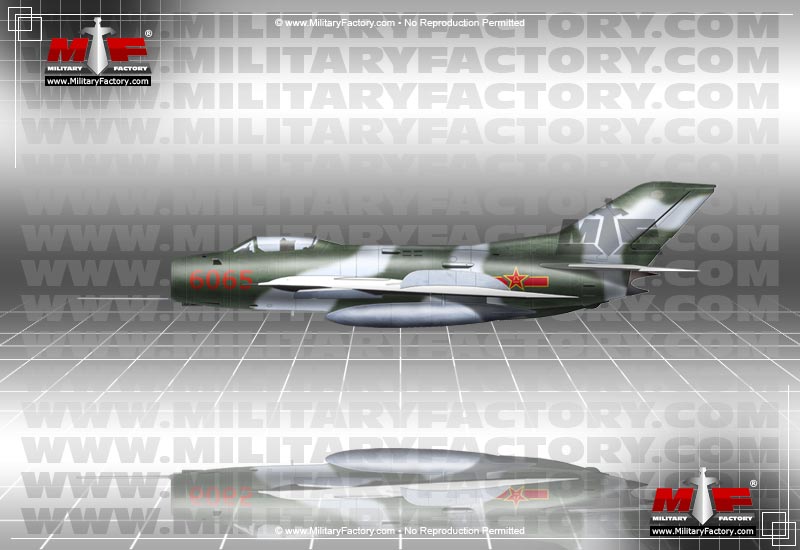