The Junkers Ju 52 Tri-Motor proved a popular transport platform for operators before, during and after World War 2.

Authored By: Staff Writer | Last Edited: 08/24/2018 | Content ©www.MilitaryFactory.com | The following text is exclusive to this site. 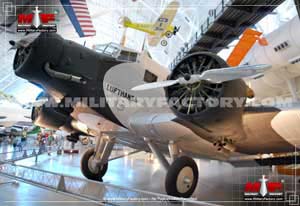 The tri-motor, prop-driven aircraft achieve popularity for a short time during the Interwar years - the period proceeding World War 1 (1914-1918) and preceding World War 2 (1939-1945). The Ford Tri-motor became the iconic model for the Americans while, from Germany, came the Junkers Ju 52. Interestingly, the latter, fondly remembered for its versatility as a transport for the German war machine, was actually adopted as a bomber by the Luftwaffe. When it became clear that the platform's service as a bomber were behind it, the type continued its storied career in the skies as a do-everything transport. Global operators, numbering nearly forty and ranging from Argentina and Austria to Uruguay and Yugoslavia.

Junkers engineers began work on a new tri-motor aircraft while basing its design on their preceding W33 series. The W33 was built in 199 from the period of 1927 to 1934. Work on the new type, essentially a dimensionally larger version, began in 1930 and continued use of corrugated metal skinning which Junkers debuted as early as World War 1 through the CL.1 monoplane fighter design. A first flight of a prototype was recorded on October 13th, 1930.

Engineers adopted a low-wing monoplane form for this aircraft and affixed a traditional single-finned tail unit at the rear. The flight deck was aft and over the nose with the passenger seating area at center - the cabin lined with rectangular windows. The undercarriage was made up of a tail-dragger arrangement featuring two main legs and a small tail wheel. Power could be served through a variety of engine installations though, rather interestingly, the original form was not a tri-motor at all - it was designed as a single-engined airframe with the sole powerplant in the nose. Seven prototypes followed before the underpowered design was reworked to incorporate an engine nacelle at each wing leading edge - thus completing the classic "tri-motor" appearance for what would become the Ju 52.

The original single-engined Ju 52 model was designated as "Ju 52/1m" and this was followed by the reimagined three-engined "Ju 52/3m" (the number followed by the lower-case "m" signifying number of engines being used). When the 3m entered production it was powered by American Pratt & Whitney "Hornet" radial piston engines until license production of the engine by BMW (the BMW 132) was had. The Ju 52/3m entered service, first as a civilian market passenger hauler, in 1932 - amidst the German pre-war build-up. Besides hauling passengers about, the aircraft proved its versatility by moving a fair amount of cargo for various industries and it was not until the Colombian Air Force used floatplane-equipped Ju 52s as medium bombers in their war with Peru (lasting from 1932 to 1933) that the type saw its first combat exposure.

In Germany, the Luftwaffe - undertaking military procurement and training programs in secret - ordered a militarized form for use as a bomber and a transport as an interim measure pending the outcome of the Dornier Do 11 medium bomber project. A pair of 7.92mmMG 15 series machine guns were added and two bomb bays cleared for carrying up to 3,000 pounds of conventional drop ordnance. When the Do 11 project came to naught, additional attention was paid to acquiring more Ju 52s by the Luftwaffe, making the Junkers product the first medium bomber of the Reich.
Advertisements

As with other modern German machines of war, the Spanish Civil War (1936-1939) became the proving ground for the Ju 52. The German government supported the fascist Nationalists in their battle against the established Republicans which were backed primarily by the Soviet Union. In this combat zone the Ju 52 served in both bomber and transport roles.

When Germany invaded neighboring Poland in September of 1939, the Ju 52 was again used in whatever role was required of it though by this time the Luftwaffe had acquired several dedicated bombing platforms for frontline use. The Ju 52 was used to deliver German paratroopers and supplies while some bombing sorties were conducted as well. VIP transport forms then emerged (indeed Ju 52s shuttled Adolph Hitler about on multiple occasions) as did MEDEVAC models, light vehicle transports and glider tows. During the invasion of the Netherlands, where scores of Ju 52 were used to deliver German paratroopers, hundreds were lost to the effective Dutch air defense network. Despite this, the Germans prevailed and continued their march to Paris, France. Ju 52s were also in action during the invasion of Crete where more paratroopers were dropped and their service continued in the Norwegian, North African and Soviet campaigns as those war zones became part of the bigger picture.

Obsolete as a bomber by 1939 standards, the Ju 52 was nonetheless a rugged and reliable aircraft with good handling qualities and remained in widespread use as a transport throughout the rest of the war. Later models were "up-gunned" to feature 4 x 7.92mm defensive machine guns. Its construction allowed for relatively speedy manufacture and operation under the harshest of conditions proved the design sound over and over.

Even with the close of the war in Europe during May of 1945, the Ju 52 soldiered on into the post-war years. While many Ju 52s were scrapped nearly 600 examples emerged from French and Spanish production in the immediate post-war period. No longer under German control, Avions Amiot of France rebranded the Ju 52 as the Amiot AAC-1 "Toucan". Spanish-produced versions were built under the CASA brand label as model numbers 352 and 352L. French production spanned from 1945 until 1947 and the Spanish commitment followed from 1945 until 1952.

IN BOMBER ROLE:
Up to 3,300 lb of conventional drop ordnance held in two internal bays. 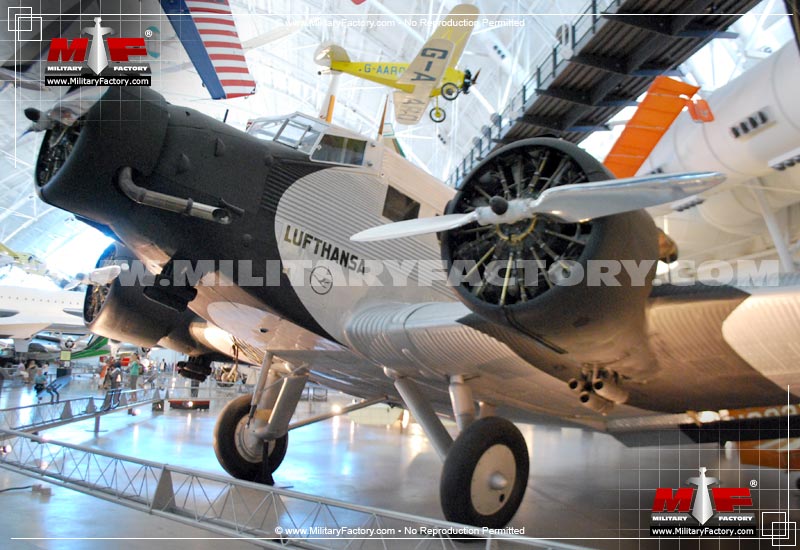 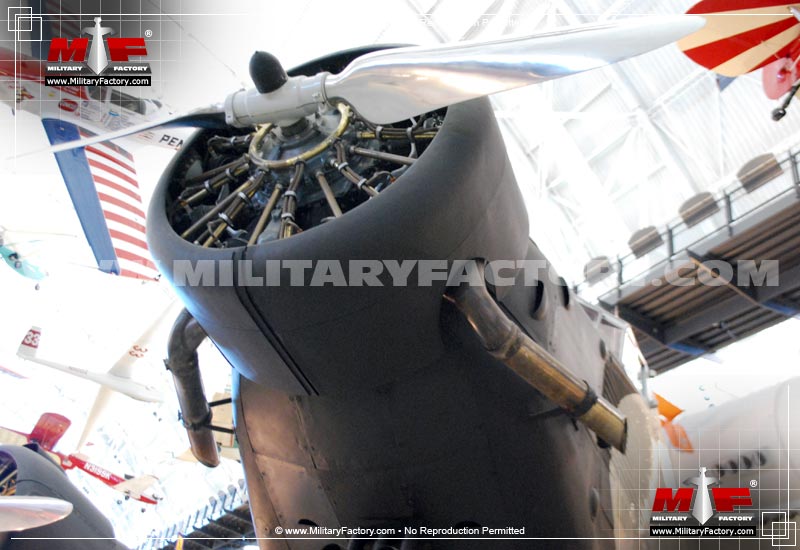 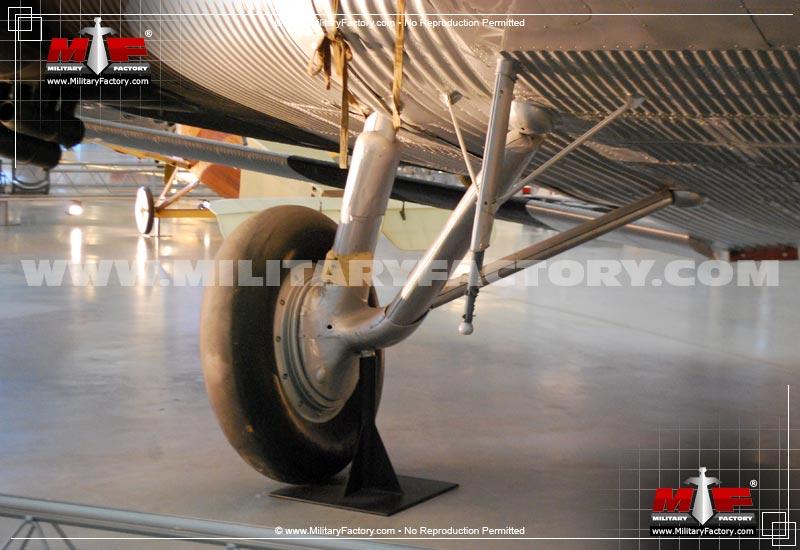 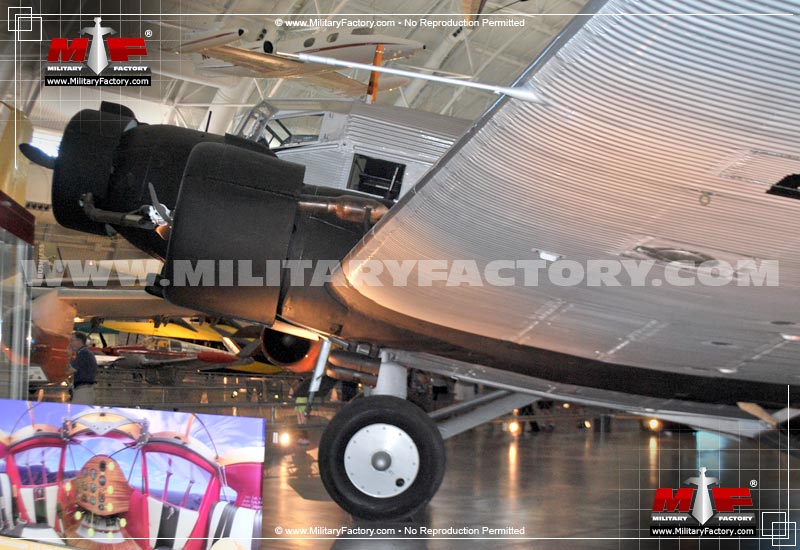 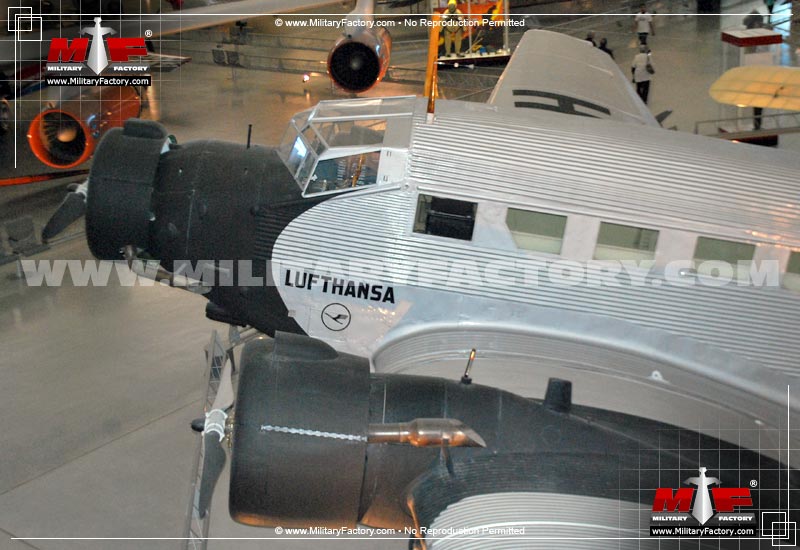 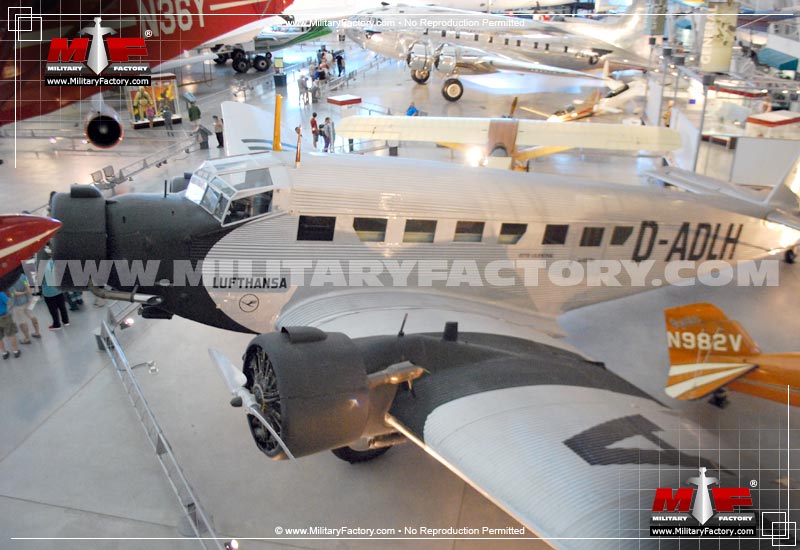 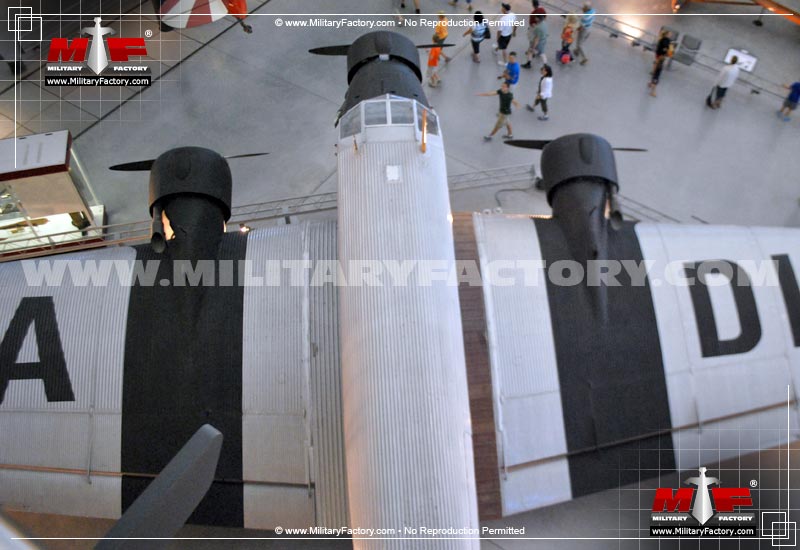 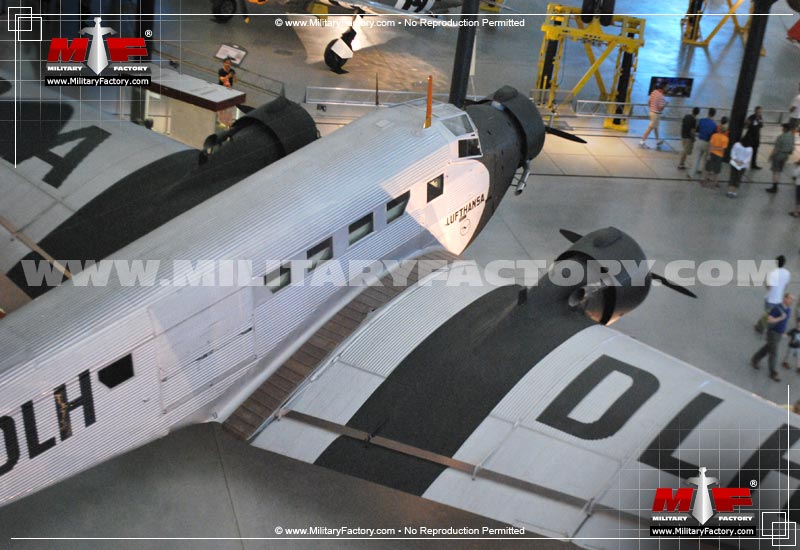 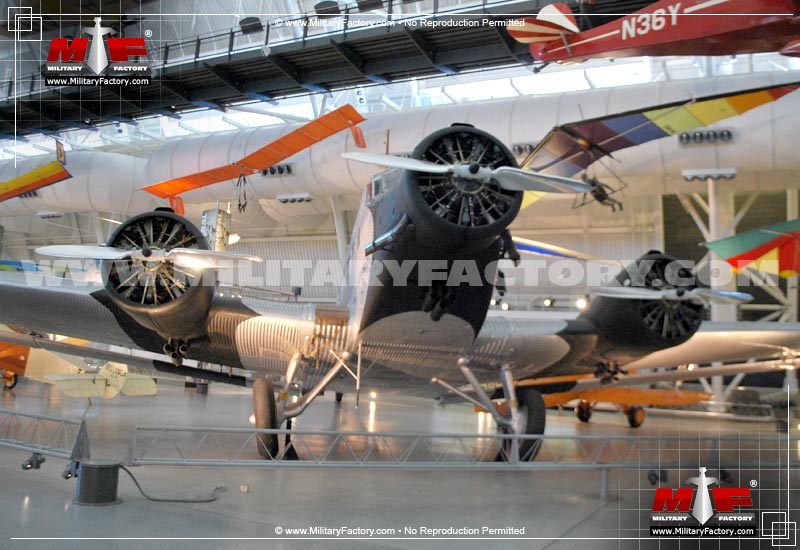 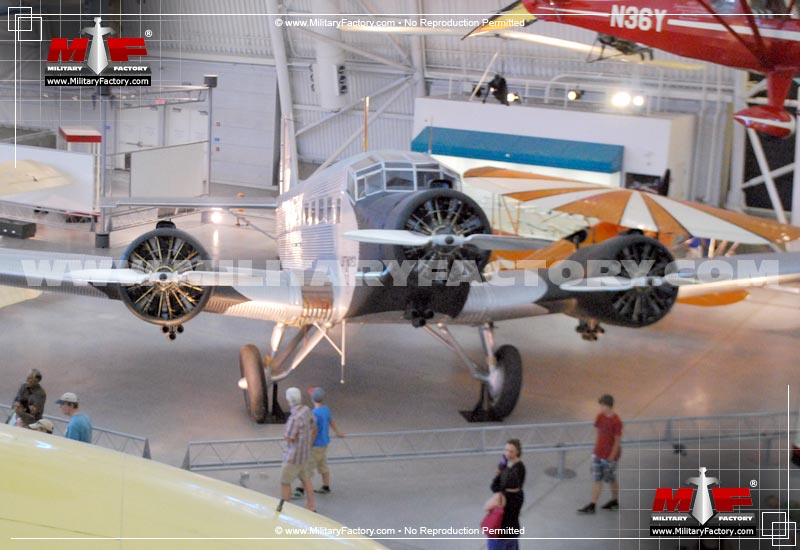 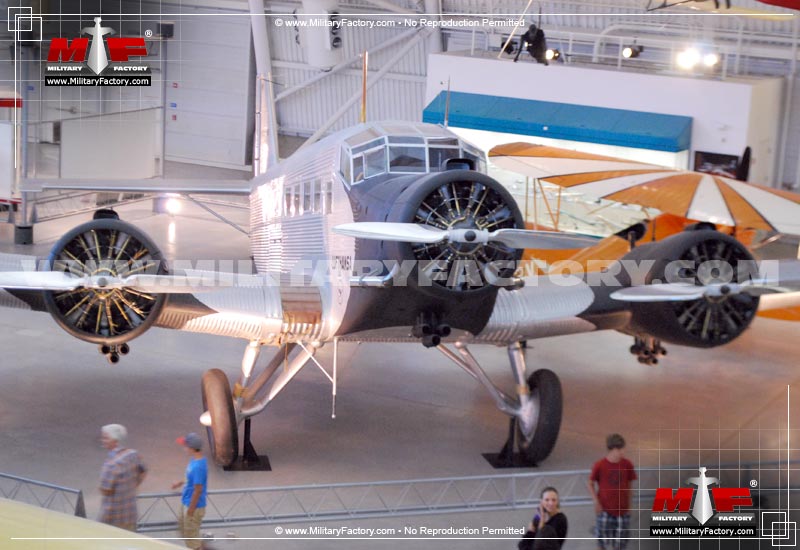 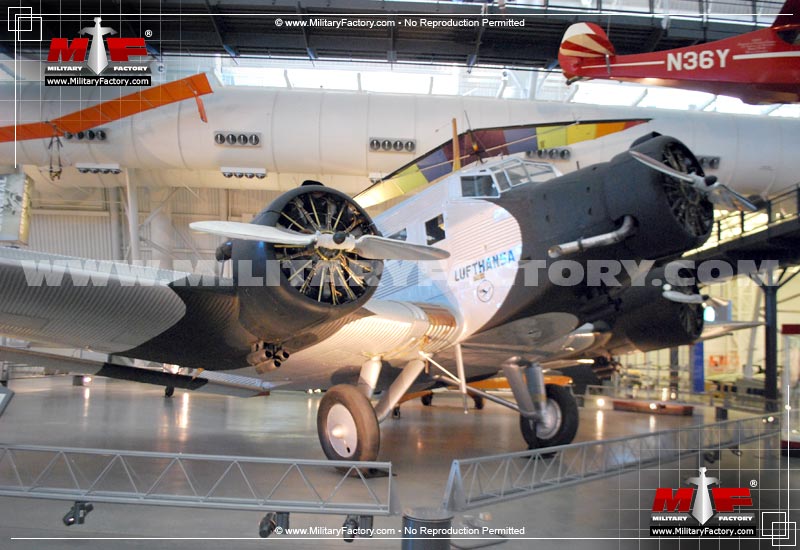 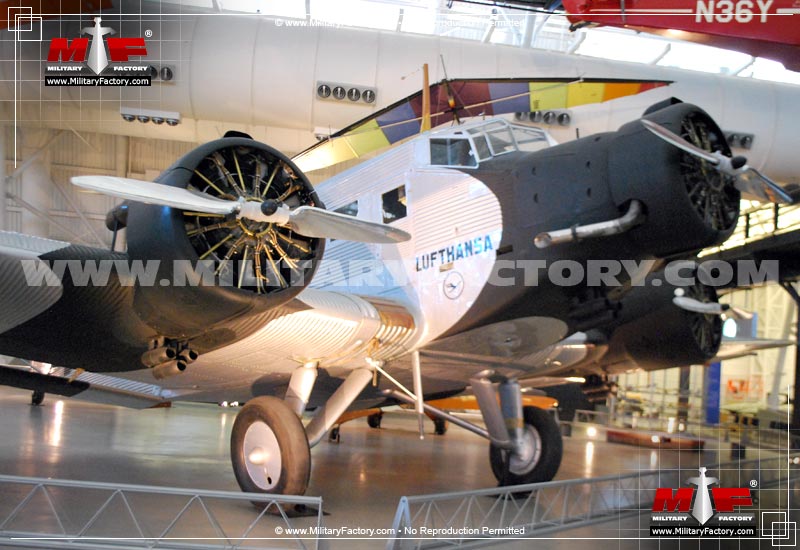 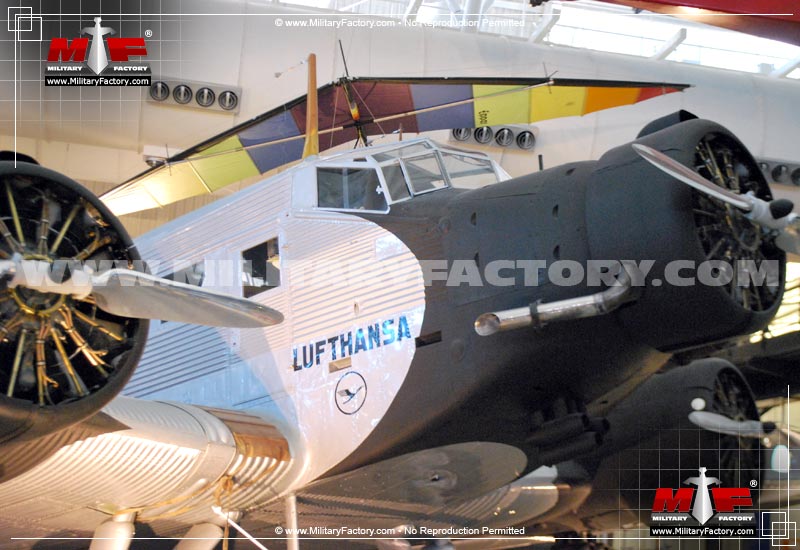 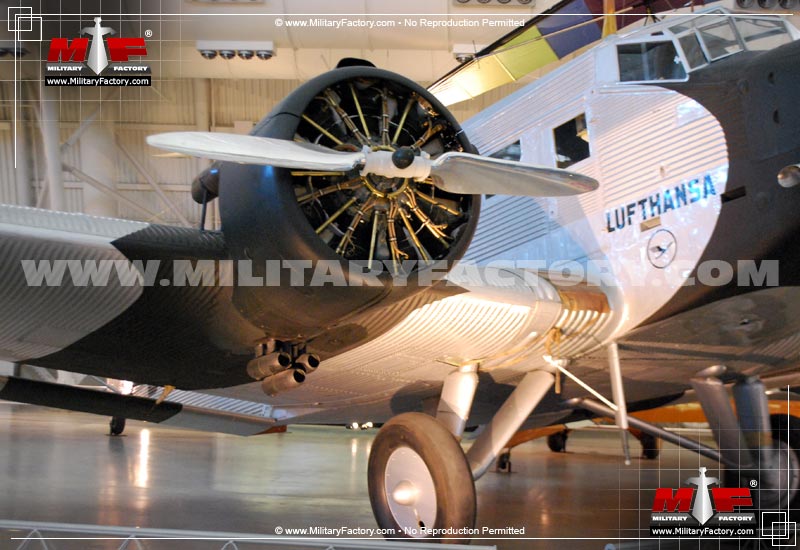