The Grumman Goose was a true unsung war hero in World War 2, involved in transport, training and at sea rescue operations.

Authored By: Staff Writer | Last Edited: 01/19/2017 | Content ©www.MilitaryFactory.com | The following text is exclusive to this site. 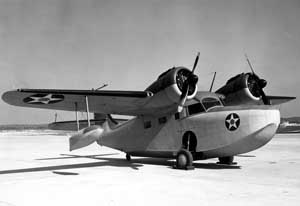 While most every aircraft venture usually began with a military requirement or private venture undertaken by a manufacturer for the purpose of sales, the Grumman Goose actually was born out of a privately-funded requirement from wealthy Long Islanders for an amphibious civil-minded air transport to New York City and back. The group therefore commissioned Grumman to design and develop the aircraft to fit such specifications giving rise to the Grumman G-21 "Goose". The Grumman concern delivered a high-wing twin-engine design with a full hull fuselage, roomy exterior and amphibious capabilities to allow for landing on runways or water. The G-21 eventually found military use as an armed patrol craft before, during and after World War 2, sealing the type's legacy for us readers to enjoy today.

The Grumman G-21 utilized many conventional design avenues of the time and one key initiative was in its liberal use of metal skin - the American aviation industry now having moved away from the wood-and-canvas fabric approach so prevalent following the close of World War 1. Some fabric surfaces were still, however, in play save for some control surfaces but the new aircraft was a most modern endeavor for the era. The fuselage was narrow in the forward profile and very deep to make room for both the passenger cabin and the ship-like hull needed for water landings. The fuselage was capped at the front by a long-running nose assembly giving it the appearance of a speed boat. The fuselage also sported slab sides with windows for viewing and sported a traditional tail section with a short, rounded vertical tail fin and applicable horizontal tailplanes. The cockpit was forward of the passenger cabin with side-by-side seating for two and aft of the nose assembly. Perhaps the most notable element of the aircraft's design (aside from its boat hull) was it high, shoulder-mounted monoplane wing placement running over the roof of the passenger cabin. This allowed for clearance of the propellers utilized by the pair of air-cooled radial piston engines fitted to each wing leading edge. Pontoon floats were affixed at each wing's midway point (outboard of the engine nacelles) for side stability. While designed primarily for operations from water, the aircraft was also completed with a manually-powered and fully retractable three-point undercarriage stance made up of two main landing gear legs and a small tail wheel structure. The main legs retracted into the fuselage sides near the cockpit. With the design completed, the prototype airframe flew for the first time on May 29th, 1937. Upon clearance for civil use, the G-21 served its clients well for they rode in style with the amenities demanded of such a lifestyle. Interiors were of luxury quality and completed with comfortable seating and waste facilities. Little did Grumman - nor its early clients - know that the type would also serve the militaries of the world in very different roles during the world war to follow.

Seeing value in the rugged, multi-faceted G-21, the United States Army Air Forces (USAAF) decided to procure the type beginning in 1938. These militarized versions were designated in typical Army fashion as "OA-9" mounts meant for aerial observation. The US Navy followed suit and designated their fleet of G-21s as "JRF" with applicable numbered marks following. Along with USN usage, the G-21 was also a mainstay of US Coast Guard operations for a time and these also followed the USN JRF designation marks. By the time of full-scale war, the US military commandeered civilian-minded G-21s into wartime service and designated these as "OA-13".

Overseas, the G-21 also saw extended use with its most notable operators being the British Royal Air Force and the Royal Canadian Air Force - both used in military roles. It was the British that assigned the nickname of "Goose" to the line and the name stuck to the series from then on (similar to the use of names given to the "Lee", "Grant" and "Sherman" US tanks used by the British Army under Lend-Lease). Other global operators eventually became Argentina, Australia, Bolivia, Brazil, Cuba, France, Honduras, Japan, Paraguay, Peru, Portugal and Sweden - all in military roles. The Imperial Japanese Navy actually evaluated the G-21 as the "Grumman LXG" but did not procure the aircraft prior to the war. In their civilian guise, the G-21 operated in Australia, British Guiana, Canada, the Dutch East Indies, Fiji, Iceland, New Zealand and Norway - wherever rugged qualities and lack of runway facilities was a concern, the G-21 just might be found.
Advertisements

The original production model of the Goose was designated simply as the "G-21" and these were powered by a pair of Pratt & Whitney Wasp Junior SB radial piston engines of 450 horsepower each. These had interior spacing for two pilots and up to six passengers though only twelve of the type were produced. The G-21A followed next and were built in thirty examples - becoming the standard to which the original G-21s were brought up to which included an increase to the gross weight from 7,500lbs to 8,000lbs. In its export form, the G-21 was marketed as the "G-21B", a lightly-armed version meant for coastal maritime patrolling. The first customer became the Portuguese Navy. As mentioned, the USAAF variant was the OA-9 and served as a general passenger transport while also called upon to undertake air-sea rescue operations as needed. Only three civilian G-21s became the "OA-13A" while two bomb-armed JRF-5s (detailed below) became the "OA-13B". It is noteworthy here that some wartime military versions of the Goose were pure sea-going aircraft, having their landing gear installations completely removed to save on weight.

When the United States Navy came calling, the G-21 was built into the "XJ3F-1" prototype - a single example appearing in 1938 for US Navy consideration and fitting eight seats in the cabin. This gave birth to the production-minded "JRF-1" of which five were produced. The JRF-1A followed suit but were completed with a hatch for camera facilities and a target towing mount. Five were produced in all. The JRF-2 was built in seven examples with interior room for medical litters meant for US Coast Guard use. The JRF-3 followed in line with the JRF-2 design and also delivered to the USCG though these introduced autopilot and deicers on the leading wing edges for cold weather operations. The JRF-4 was based on the JRF-1A for the USN and added provision for 2 x depth charges to be carried externally under each wing. Ten examples of this type were delivered. The JRF-5 proved the definitive USN/USCG variant with some 184 produced. These were delivered complete with the aforementioned camera facilities and target towing installation of the JRF-1A and the deicing boots of the JRF-3 but also added bomb racks for conventional drop bombs. The JRF-5 was known as the JRF-5G to the USCG of which it received at least 24 from the USN. A naval trainer version was developed for Lend-Lease sale and this was designated as the JRF-6B to which some 50 examples were produced.

In British and Commonwealth service, the G-21 was known simply as the "Goose". In typical British fashion, the aircraft was afforded a series of "marks" to differentiate various production types. This began with the "Goose Mk I" of which three were operated by the Fleet Air Arm. The Goose Mk IA became 44 JRF-6B models procured via Lend-Lease and operated as trainers for the British Navy in the Caribbean. The Goose Mk II were just a pair of JRF-5 models serving as military VIP transports between Canada and the United States.

In post-war America, the G-21 survived largely in operation with the US Department of the Interior of Alaska where its multi-role functionality in varying operating environments were fully put to the test. These were fitted with 2 x Garrett TPE331-2UA-203D series turboprop engines delivering 715 shaft horsepower each. Many others ended up in private ownership or functioning as civilian air taxis for tourists. Today, G-21s still operate mostly in private ownership - a testament to their great engineering and construction. In all, some 345 Grumman Goose aircraft were completed and delivered - an amazing amount (perhaps as many as 30) are still flyable today. Wartime surplus and foreign sales ensured that the Goose managed a healthy postwar life and many were modified by specialist house McKinnon Enterprises as the G-21C, G-21D, G-21E, G-21F and the final McKinnon G-21G "Turbo-Goose". A relatively new initiative by Antilles Seaplanes of North Carolina intends on bringing the Goose to full modern standards with the incorporation of all-digital cockpit facilities, updated flight systems and structural improvements.

For those who managed an existence in front of their television sets during the 1980s, the Grumman Goose could be seen in prominent roles through the Hollywood motion picture / Arnold Schwarzenegger vehicle "Commando" as well as the short-lived ABC television series "Tales of the Golden Monkey".
Advertisements

(Showcased performance specifications pertain to the Grumman JRF-5 Goose production variant. Compare this aircraft entry against any other in our database or View aircraft by powerplant type)
Usually none unless for armed military use. 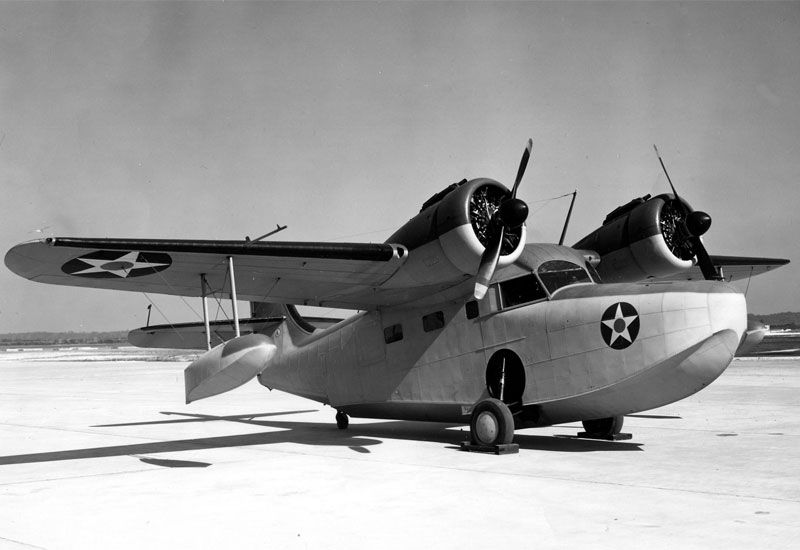 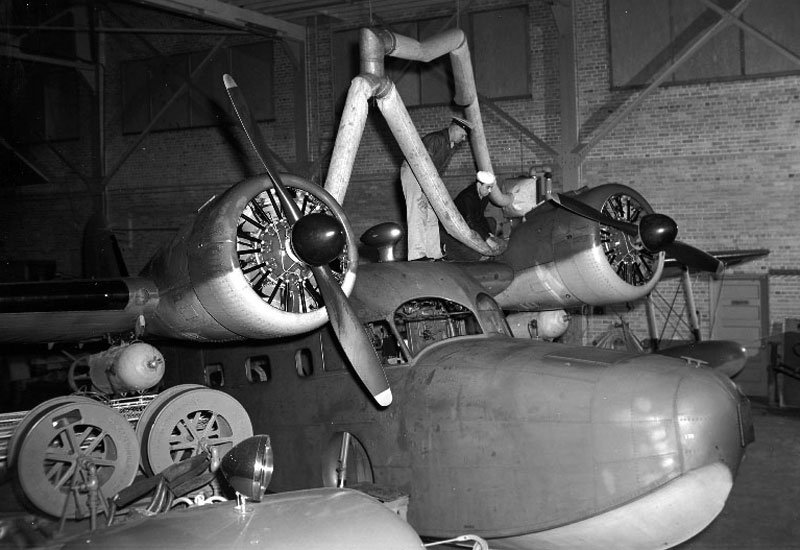 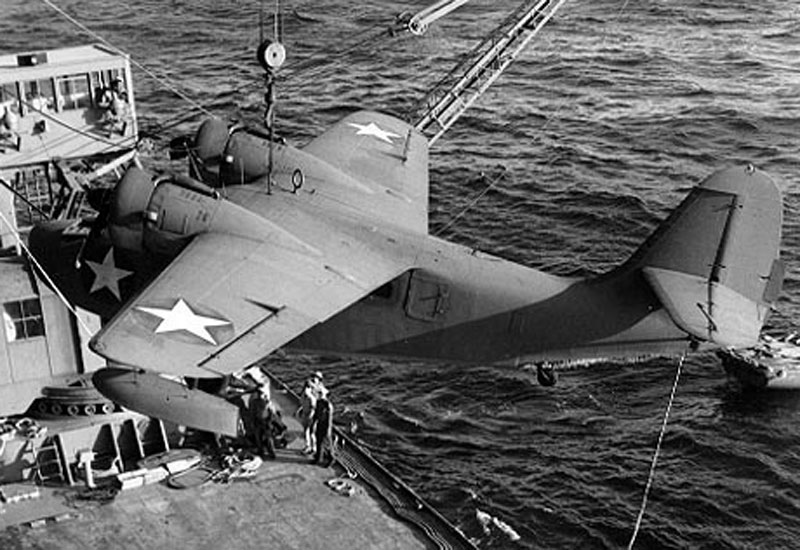