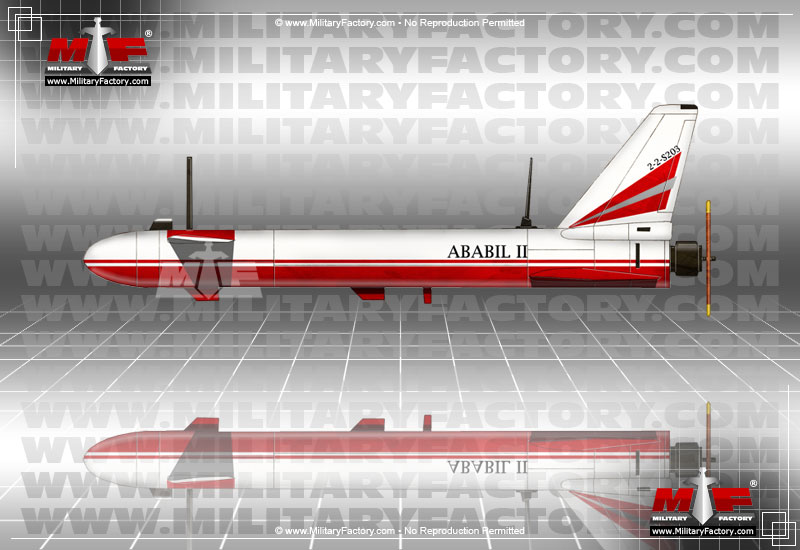 The Iranian Ghods Abibil UAV is sent airborne via a launch rail fitted to the back of an army utility truck.

Unmanned Aerial Vehicles (UAVs) were once considered primarily the domains of Israel and the United States Military. Throughout the 1990's, however, every major military power has seen fit to fund their own UAV developments for a variety of battlefield-related services - from reconnaissance, surveillance and assault. UAVs present some optimal advantages even in the age of digital communications and satellites: they are relatively cheap to produce, operate and maintain when compared to fielding a modern multi-role fighter, they do not require the senseless exposure of a pilot to enemy air and ground defenses and they provide real-time battlefield assessment capabilities (satellites must be in orbit over the area of the earth to be monitored, with this option reoccurring only once every 24 hours). In this way, UAVs are really the method of warfare for the near foreseeable future and beyond.

The Ababil takes on a conventional aerodynamic form, reflecting more the look of a winged rocket than anything else. The body is a tubular frame capped with a nose cone. Wing canards are high-mounted at the forward section of the fuselage while the main wing spans are low-mounted fitting to the vehicles extreme aft. The engine is rear mounted and features a "pusher" type two-bladed propeller system (conventional propeller and engines "pull" and are therefore traditionally mounted forward of the fuselage or in wing nacelles). A single vertical tail fin rounds out the design elements. Performance specifications report maximum range of up to 150 miles with a radius of just over 93 miles. The service ceiling is listed at 14,000 feet with a top speed of up to 186 miles-per-hour. This UAV system is not going to win any design awards based on looks alone but its operational involvement in the region has garnered the attention of the United States Department of Defense and regional American allies.

The Ababil is launched via a pneumatic-type launcher from the rear of a specially-configured Benz-911 utility truck. The UAV is also capable of being launched at sea with the use of rockets. Though no visible undercarriage is apparent, the Ababil is recovered via skids and an Iran Aircraft Manufacturing Industries parachute system. Operationally, the Ababil can sport a variety of surveillance-minded equipment configurations depending on the Ababil model and its defined mission role. An integrated communications package allows for a direct datalink between the ground-based operator and airborne vehicle system. The Shahid Noroozi guidance system is an indigenous Iranian product while an IR-based flare system along with a CCD Television camera are part of the internal workings. In the assault role, the Ababil can also sport an 88lb warhead munition. This particular version takes the warhead payload all the way to its target resulting in the entire loss of the UAV (unlike American Predators/Reapers that air-launch their Hellfire missiles). A few other specialized variants are known to exist.

As of this writing, the Ababil has been fielded by both Iran and Hezbollah. Hezbollah received 12 examples from Iran (according to Israeli sources) to which three were shot down by Israeli fighters in the 2006 Lebanon War. An Iranian Ababil was also shot down by a United States General Dynamics F-16 Fighting Falcon over Iraq on March 16th, 2009, just 60 miles northeast of Baghdad near Balad Ruz. Speculation persists as to the UAV's motives in the area but it did nothing to lessen the tension between Washington and Tehran.

The 120 production example quantity stated on our website is an estimated value.

(Showcased performance specifications pertain to the base Ghods Ababil (Swallow) production variant. Compare this aircraft entry against any other in our database. View aircraft by powerplant type)
OPTIONAL:
Guided Explosive Warhead Payload (the entire UAV is lost in the action).


(Not all ordnance types may be represented in the showcase above)
Hardpoint Mountings: 1