The Aerospatiale Alouette II has proven itself to be a commercial success, seeing operation service with dozens of countries worldwide. 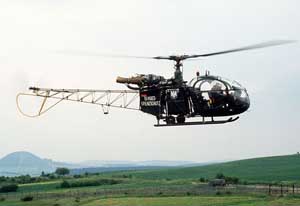 The Alouette II helicopter series is billed as a multi-role, light rotary-wing platform charged with a myriad of duties in both military and civilian service. In its military guises, the Alouette has been utilized in the reconnaissance and liaison roles and has been further evolved to exploit its limited offensive capabilities to an extent. The helicopter's inherently simple design and operation have allowed it to be a starting point for helicopter pilot training, basic passenger transport, agricultural spraying or air-rescue service.

A prototype form first flew on March 12th, 1955 and original forms were powered by the Salmson 9 series piston engine. Later, development turned to a turbine powerplant. Production was undertaken as the Sud-Est SE 3130 Alouette II with deliveries to the French Army beginning in 1957 while the helicopter went on to set various altitude records along the way - proving itself a capable high-altitude performer. The Alouette II also became the first production helicopter to implement large-scale use of a gasoline-fueled turbine engine and the first to successfully make use of anti-tank missiles. The initial production form was then followed by the more powerful Astazou-powered version first flying on January 31st, 1961.

Original design, development and production was handled by the French concern of Sud-Est ("SE")which eventually merged in 1957 with Sud Ouest to become Sud-Aviation ("SA") resulting in the noted redesignation of some Alouette II production models from "SE" to "SA". In 1970, Sud Aviation merged with Nord Aviation to become Aerospatiale and, finally, in 2000, Aerospatiale merged under the EADS banner. Production of the Alouette II series eventually spanned from 1956 into 1975 to which over 1,500 examples were manufactured and subsequently delivered to a variety of global customers. The type still sees widespread service today under the Aerospatiale label.

Design of the Alouette II is rather conventional despite its fragile-looking exterior. All told, the Alouette design is a robust - though simple - end product that can take on various duties as needed. The cockpit is set to the extreme front end of the short fuselage and is covered over in rounded windscreens offering excellent visibility. Basic seating is a pilot and up to three or four passengers. Entry is via two side hinged automobile-style doors. The fuselage structure houses the major internal working components of the helicopter including its powerplant, gearbox and fuel stores. The empennage is nothing more than a network of struts used to deliver power (via a shaft) to the tail rotor and two smallish horizontal planes are identified. A small, looped frame wire protects the tail rotor from hitting the ground. The helicopter is powered by a single Turbomeca Artouste IIC6 series turboshaft engine of 530 horsepower though downrated to 460 horsepower. The engine is situated high atop the design and to the rear, exhausting through a cylindrical covering. The powerplant allows for a top speed of 115 miles per hour with a cruise speed of 106 miles per hour and a range of 350 miles. The service ceiling is listed at 7,500 feet though this has been pushed regularly countless times. Rate of climb is 820 feet per second. Rotor diameter is 33.5 feet. The main rotor sports three blades while the tail rotor fits two. The undercarriage of the aircraft is of a conventional paired skid arrangement connected to the fuselage base at two points and backed by a pair of wheels at the rear.
Advertisements

While typically unarmed in its many roles, Alouette II platforms have been seen fitted with anti-tank wire-guided missile launchers as well as torpedoes. This broadens the usefulness of the Alouette II family in a military sense though its ordnance-carrying capabilities are inherently limited by the helicopter's light design nature. However, the Alouette II's overall small stature and rather low-profile work for its battlefield survivability in making it a smaller target to ground-based anti-aircraft threats.

Since its inception, the Alouette II has existed in only a few notable variants including the initial SE 3130 Alouette II which was redesignated to "SA 313B Alouette II" in 1967. The SA 315B "Lama" was developed specifically for the Indian Army though completed with Alouette III-type components including engines (Artouste IIIB) and main rotor. First flight of the type was on March 17th, 1969 and some 407 of the model were produced into 1989. The HAL "Lancer" appeared with anti-armor rocket pods and heavy machine guns in 1988 developed specifically for counter-insurgency operations. The SE 3180 Alouette II became the "SA 318C Alouette II" while the "Astazou" mark fitted the Turbomeca Astazou IIA series shaft turbine of 360 shaft horsepower and an Alouette III series gearbox. The Astazou engine was actually derated from 530shp to promote improved speeds and maximum take-off weights.

All told, the Alouette II series helicopters have seen operations the world over. Operators of note have included Argentina, Belgium, Brazil, Finland, France, Germany, India, Israel, Mexico, Pakistan, Portugal, South Korea, South Africa, South Vietnam, Sweden, Switzerland, Turkey and the United Kingdom. Some operators have replaced the aging helicopter line as needed while others still swear by the types qualities and capabilities with no need to upgrade. Indian Alouette IIs have been produced locally through HAL as the "Cheetah", these being based on the SA 315B Lamas design. Similarly, production licenses were granted for local manufacture within the United States, Brazil and Sweden (as the "HKP 2 Alouette II").

The Alouette II was eventually superseded at Sud Aviation by the arrival of the larger Alouette III series appearing in 1960. Over 2,000 of that type were eventually built with production spanning from 1961 to 1985.
Advertisements

(Showcased performance specifications pertain to the Aerospatiale SA313 Alouette II production variant. Compare this aircraft entry against any other in our database or View aircraft by powerplant type)
Usually none. Series has been fitted with Anti-Tank Guided Missiles (ATGMs) for "tank-killer" role or torpedoes for maritime Anti-Ship (AS) patrol. 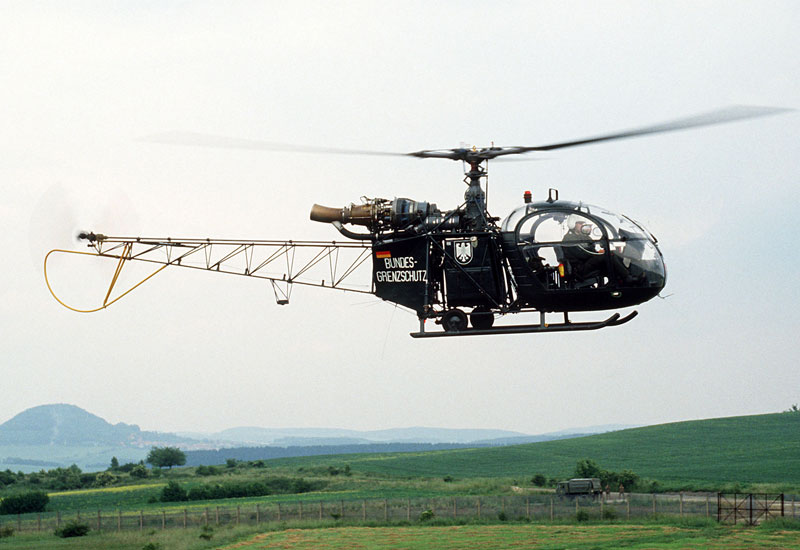 Aviation developments of similar form and function, or related to, the Aerospatiale Alouette II...