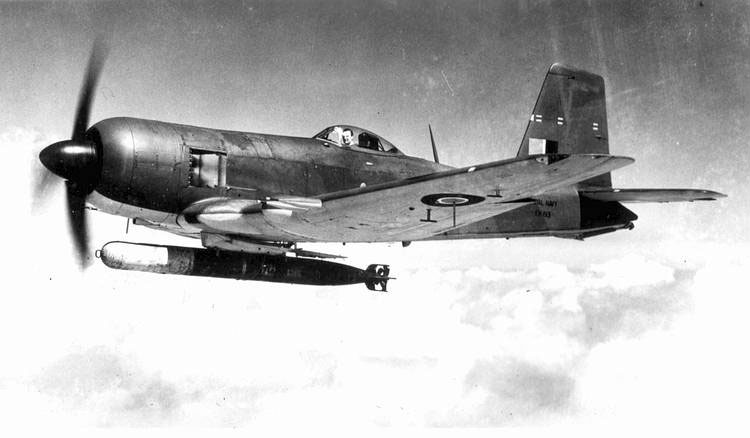 The Blackburn Firebrand was a carried-based strike fighter aircraft developed by Blackburn Aircraft of the United Kingdom. She was a design of G.E. Petty and went on to live a troubled development before reaching operation status thanks to an engine switch that effectively doomed the Firebrand to mediocrity. Despite the aircraft appearing during the middle years of World War 2 and achieving first flight by February 27th, 1942, the Blackburn Firebrand - in its definitive production form - simply arrived too late in the conflict to ever see combat.

The British Air Ministry brought about Specification N.11/40 requiring a capable, high-performance, single-seat fighter for use on Royal Navy carriers. The selected powerplant for the new fighter was to be the impressive Napier Sabre III, a 24-cylinder H-type inline engine. Blackburn responded with its Firebrand proposal and developed the unarmed B-36 prototype. This was followed by the armed F.Mk I prototype that produced 9 working examples.

At the same time that the Firebrand was being developed, the Hawker Typhoon was ready to hit the assembly lines and effectively "stole" the available Napier Sabre III engines. As such, Blackburn was forced to re-engine their design and settle on the Bristol Centaurus VII 18-cylinder radial piston powerplant. This redesign also forced a rethinking in the intended roles of the Firebrand. Along with its fighter duties, the Firebrand was now envisioned to double as a strike platform capable of delivering bombs, rockets and even a torpedo (ala the Hawker Typhoon). The new design was fitted with lengthened wings and appropriate munitions provisions in the form of pylons. The resulting product became the B-45 model - achieving first flight on March 31st, 1943 - and entered production as the TF.Mk II. Like the F.Mk I model before it, the TF.Mk II was limited to just 12 production examples.

An attempt at improving the Firebrand line came in the form of the Centaurus VII-engined TF.Mk III model. This "improved" design revealed flaws in low-speed flight thanks to poor rudder control and a tremendous amount of torque output from the new engine. A first flight was achieved on December 21st, 1943 and further testing resulted in the deaths of two test pilots along with months of re-evaluation before the Firebrand was even successfully test-landed on a carrier deck. Despite the successful landing, the aircraft was deemed too dangerous for use as a production aircraft. As such, this particular Firebrand model was dropped from production contention.

Model B-46 became the true improved Firebrand as the TF.Mk IV model, first flying on May 17th, 1945. A new engine - the Bristol Centaurus IX engine - was allocated to the TF.Mk IV as well as a revised tail with increased surface areas. Dive brakes were installed on both the upper and lower wing assemblies for improved control. The TF.Mk IV became the first quantitative and somewhat definitive Firebrand in production with 102 examples produced. At least 40 of these aircraft were later converted to the newer TF.Mk 5 standard.
Advertisements

Externally, design of the Firebrand showcased some similarities to the Hawker Tempest with its slim and streamlined fuselage and large propeller spinner. The cockpit was situated at the middle of the fuselage and featured a two-piece bubble-style canopy affording the pilot with relatively excellent all-around vision. Wings were low-mounted monoplane systems with dihedral and positioned fairly forward along the fuselage sides. The empennage was dominated by a large vertical tail fin with horizontal planes positioned well behind the vertical tail unit. The undercarriage was of a conventional "tail-dragger" arrangement featuring two main landing gears and a single tail wheel. All three systems were fully retractable.

As with most of the British fighters of the time, cannon armament was the standard firepower for the Firebrand. This consisted of 4 x 20mm Hispano Mk II series cannons mounted in pairs on each wing. For a more direct increase to its lethality, the Firebrand could sport a single 1,850lb 18" Mark XVII series torpedo running centerline under the fuselage or 2 x 1,000lb bombs under the wings - one to a wing pylon.

The definitive TF.Mk IV Firebrand sported the Bristol Centaurus IX series, 18-cylinder, air-cooled, radial piston engine with a listed output of 2,500 horsepower powering a four-bladed propeller system. Performance specifications included a top speed of 350 miles per hour with a listed cruise speed of 289 miles per hour. Range was equivalent to 1,250 miles when fitted with drop tanks. A rate-of-climb of 2,600 feet-per-minute was possible with a service ceiling of approximately 28,500 feet.

The TF.Mk 5 followed the TF.Mk IV into service with subtle aerodynamic related revisions. Production only lasted through 68 examples. The improved TF.Mk 5A finished up the Firebrand line to which total production amounted to 193 examples, lasting from 1943 through 1947.

United Kingdom
(OPERATORS list includes past, present, and future operators when applicable)
✓ Air-to-Air Combat, Fighter
General ability to actively engage other aircraft of similar form and function, typically through guns, missiles, and/or aerial rockets. ✓ Ground Attack (Bombing, Strafing)
Ability to conduct aerial bombing of ground targets by way of (but not limited to) guns, bombs, missiles, rockets, and the like. ✓ Maritime / Navy
Land-based or shipborne capability for operating over-water in various maritime-related roles while supported by allied naval surface elements.