The West German Dornier Do 28 STOL series preceded the equally-successful Do 228 line of small, lightweight utility aircraft for military and civilian service.

Authored By: Staff Writer | Last Edited: 08/24/2018 | Content ©www.MilitaryFactory.com | The following text is exclusive to this site. 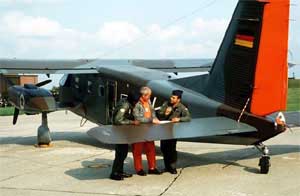 In the mid-1950s, Dornier Flugzeugbau GmbH of West Germany developed the single engine Do 27 Short Take-Off and Landing (STOL) lightweight utility-minded aircraft. This little high-wing cantilever aircraft went on to a very successful service life with many variants and operators through both civilian and military markets. From this design came a new offering, a two-engine version of the Do 27 which became the Do 28 of 1959. This model emerged with the same high-wing layout and a pair of underslung Lycoming engines driving three-bladed propellers. The Do 28 retained many of the key qualities of the Do 27 before it including its STOL capabilities.

The original Do 28 line was led by the prototype which was designated simply as "Do 28". This was fitted with 2 x Lycoming O-360-A1A engines of 180 horsepower each driving two-blade propeller units. First flight was on April 29th, 1959. Then followed the Do 28A-1 which fitted O-540-A1A engines of 250 horsepower. Its wing mainplane was increased by seven feet for improved stability and handling and a first flight was recorded on March 20th, 1960. Sixty of this form were completed. The Do 28A-1 was a floatplane form. The Do 28B-1, based largely on the preceding D 28A model, arrived with a larger tailplane, greater fuel stores, and an increased nose cone. Engines were the IO-540 (fuel-injected) driving three-blade propeller units. Sixty of these were produced as well. The Do 28B-1-S was to be a floatplane version but this fell to naught. The Do 28B-2 was unveiled with turbocharged Lycoming engines (TIO-540 series) but only one was ever produced. The Do 28C was a proposed passenger hauler with seating for eight. Its drive power would have been from a pair of turboprop engines yielding 530 horsepower each but this design was not furthered.

The Do 28D "Skyservant" went on to become the definitive product of the Do 28 line. This from saw a new boxy fuselage added with an increased-area wing. Power was through 2 x IGSO-540 series engines of 380 horsepower. Nine of this mark were completed. The Do 28D-1 was the initial production model and this saw a larger span wing added. Manufacture totaled 54 units. The Do 28D-1 followed with a reinforced fuselage, larger passenger cabin and an increase in Maximum Take-Off Weight (MTOW). Production added 172 more aircraft. The D 28D-2/OU was used in the pollution patrol role and a sole Do 28D-2 was converted as the Do 28D-2T with 2 x Lycoming TIGO-540 turbocharged engines.

The Do 28 G.92 became a modernization of the Do 28D. Work was undertaken in 1995 and included fitting 2 x Walter Engines M601-D2 turboprops of 450 horsepower each. Seven of this type were produced in all. The Do 128-D was the Do 28D-2 with improvements throughout. The Do 128-6 was the primary production quality form of the Turbo Skyservant development and six were completed.

Like the Do 27, the Do 28 saw a myriad of operators utilize the high performance light aircraft in various roles (both military and civlian). This ranged from Angola and Benin to Somalia and Thailand. Many are still in use today (2015), proving the effectiveness of the evolved design.
Advertisements

(Showcased performance specifications pertain to the Dornier Do 28D-2 production variant. Compare this aircraft entry against any other in our database or View aircraft by powerplant type)
None. 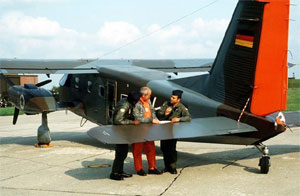