The Supermarine Scimitar was a capable carrier-borne fighter but became the last product of the storied Supermarine aircraft concern.

Authored By: Dan Alex | Last Edited: 05/05/2019 | Content ©www.MilitaryFactory.com | The following text is exclusive to this site. 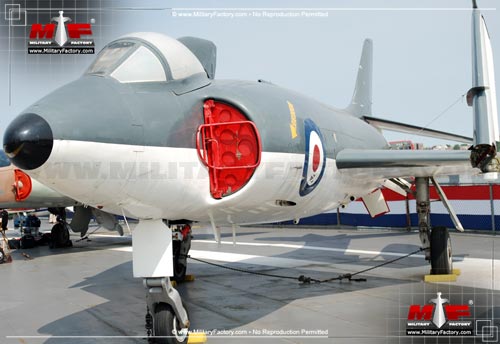 For its part in history, the Supermarine Scimitar served the British Fleet Air Arm (FAA) as a carrier-based, jet-powered, single-seat fighter. The aircraft held several "firsts" in its service run with the Royal Navy - it became its first swept-wing, single-seat jet fighter and the first FAA aircraft to be cleared for use with Atomic weapons. The Scimitar could be called on to undertake multi-role sorties encompassing long-range reconnaissance, high-altitude interception and low-level bombing, making it an ideal and lethal addition to the ranks of the Royal Navy and the aircraft served in these varying capacities for a decade.

The legacy of the Scimitar was born out of a protracted development period covering a single-seat naval fighter that began with the Vickers-Supermarine Type 508. The Type 508 was a jet-powered, straight-wing fighter design with a "Vee" style tail assembly. Another straight-wing prototype soon emerged under the designation of Type 529 while still another research prototype, this with swept-back wings, was designated as the Type 525.

Attention soon centered in on the Type 525 prototype and the design proved promising. First flight of this prototype was on April 27th, 1954. Though later lost to accident (in some ways a sign of things to come), the Type 525 design itself endured in a revised form as the Type 544. Three subtly-different prototypes of the Type 544 were then produced. Under Specification N113, a revised Royal Navy need changed the Type 544 requirement from a dedicated fighter platform to that of a low-level strike aircraft. The Type 544 subsequently achieved its first flight on January 19th, 1956 and 100 examples were soon put on order under the final designation of "Scimitar F.1". The Scimitar F.1 made its maiden flight on January 11th, 1957. Soon enough, the original production order was cut down to just 76 aircraft.

Design of this rather large aircraft was quite conventional. The cockpit was held well forward in the rounded fuselage as part of the shortened nose assembly. Intakes were fitted to either fuselage side and ran about 80% of the aircraft's length, ultimately capped by exhaust nozzles just ahead of the empennage. The empennage was conventional as well, fitting a single vertical tail fin with elevated horizontal planes. All tail surfaces were swept. The main wings were low-mounted along the fuselage sides and featured high degrees of sweep, moreso along the leading edges. The undercarriage was a tricycle arrangement featuring two single-wheeled main landing gear legs and a single-wheeled nose landing gear leg. The main landing gears retracted towards centerline while the nose landing gear retracted rearwards, just under and aft of the cockpit floor. An arrestor hook was fitted to the base of the empennage.
Advertisements

Power to the Scimitar F.1 was supplied via two Rolls-Royce Avon 202 series turbojets delivering up to 11,250lbf of thrust each. Performance specifications included a top speed of 736 miles per hour at sea level with a range of 1,422 miles. The aircraft had a service ceiling listed at 46,000 feet. Total weight at take-off was approximately 34,200lbs.

Standard armament centered around a impressive battery of quadruple 30mm ADEN cannons. This could be complimented by external ordnance spread across four hardpoints. Hardpoints could fitted with air-to-air missiles in the form of the American-made AIM-9 Sidewinder or air-to surface missiles in the form of the AGM-12 Bullpup. Additionally, the Scimitar could make use of up to 4 x 1,000 conventional drop bombs or 4 x rocket pods fielding 2" or 3" unguided rockets as needed.

The fact that the legacy of the Scimitar was limited is showcased in the only existing production form as the Scimitar F.1. Of the 76 production aircraft delivered, some 39 of these eventually lost to accident - an appalling accident rate to say the least. Scimitars had a penchant for accidents in that the rather smallish carriers of the British Royal Navy and the powerful performance capabilities of the advanced aircraft worked well against one another. Though pilots and crews alike appreciated the intricacies of their Scimitars, it was somewhat ahead of its time and required a great deal of attention and skill - be it in the air or on the ground. At one point, it is said that a single Scimitar required some 1,000 hours of maintenance attention to keep her at the ready.

Once in service with the Royal Navy's Fleet Air Arm, the Scimitar was fielded by the 736, 800, 803, 804 and 807 Naval Air Squadrons, replacing the rather vanilla single-seat Hawker Sea Hawks. Its first users became the boys of No. 803 out of Loussiemouth in June of 1958. The Scimitar was eventually replaced in service by the Blackburn Buccaneer in the ground attack role and removed from frontline service as soon as 1966 but retained her nuclear role up until 1969. Ironically, Scimitars served Buccaneers as aerial fuel tanks for a time. Though the Scimitar also maintained some air interception qualities about her, she too was done in for this role by the unique de Havilland Sea Vixen beginning service in July of 1959.

A Supermarine Scimitar F.1 (serial XD220) can be found along the deck of the Intrepid Sea-Air-Space Museum in New York City. This particular example is on loan from the FAA museum itself.

In all, the Scimitar lived a somewhat "under the radar" existence though a short one at that. The aircraft was also the last product by the fabled Supermarine firm, the company responsible for the excellent war-winning Supermarine Spitfire of World War 2 fame.
Advertisements 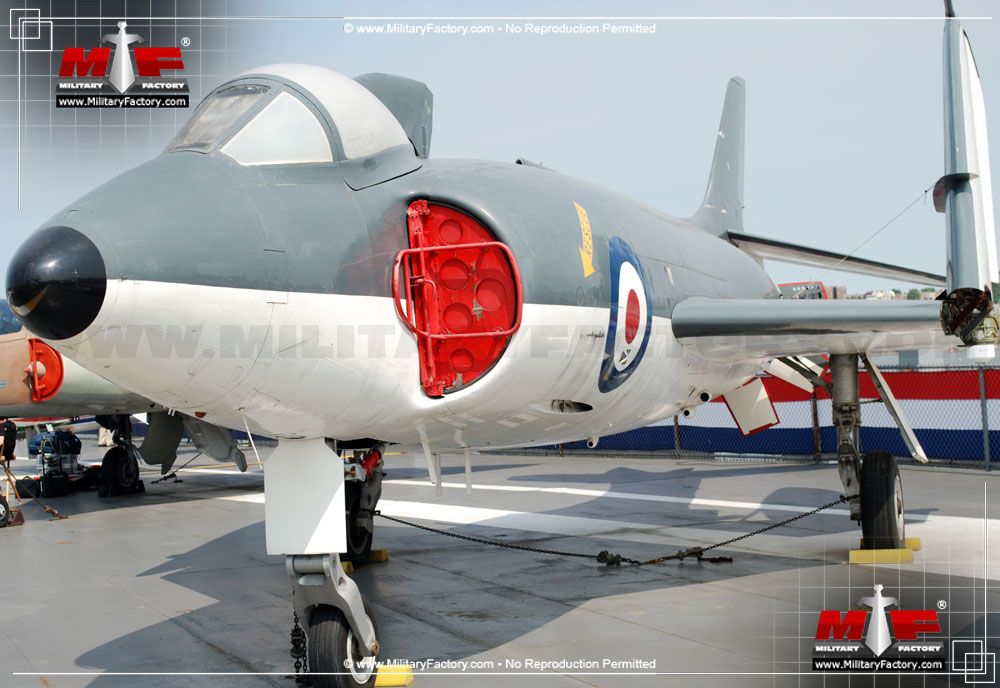 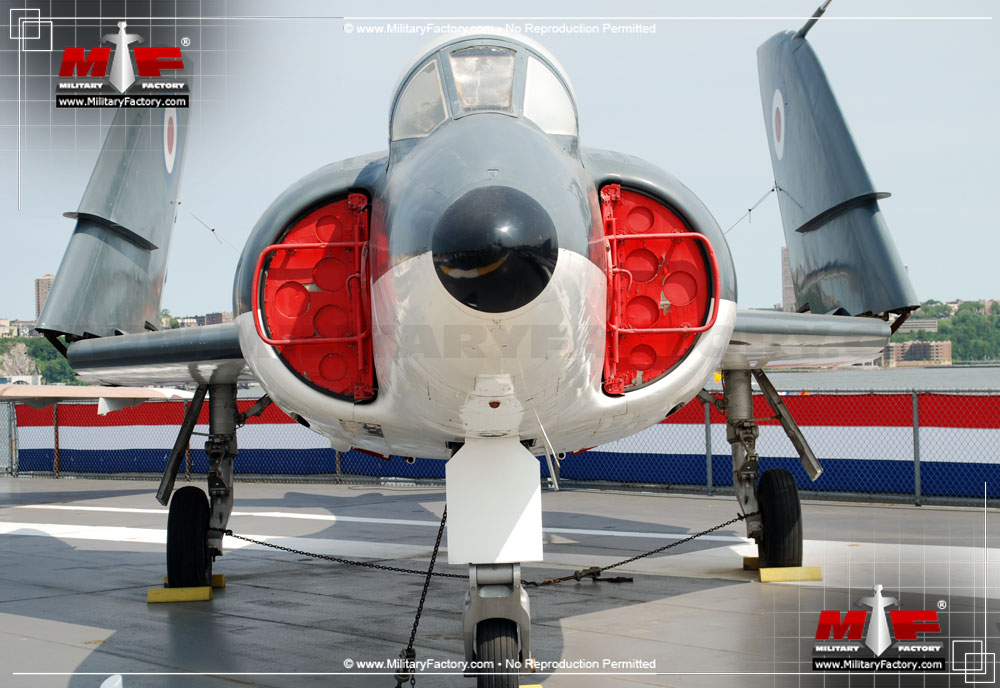 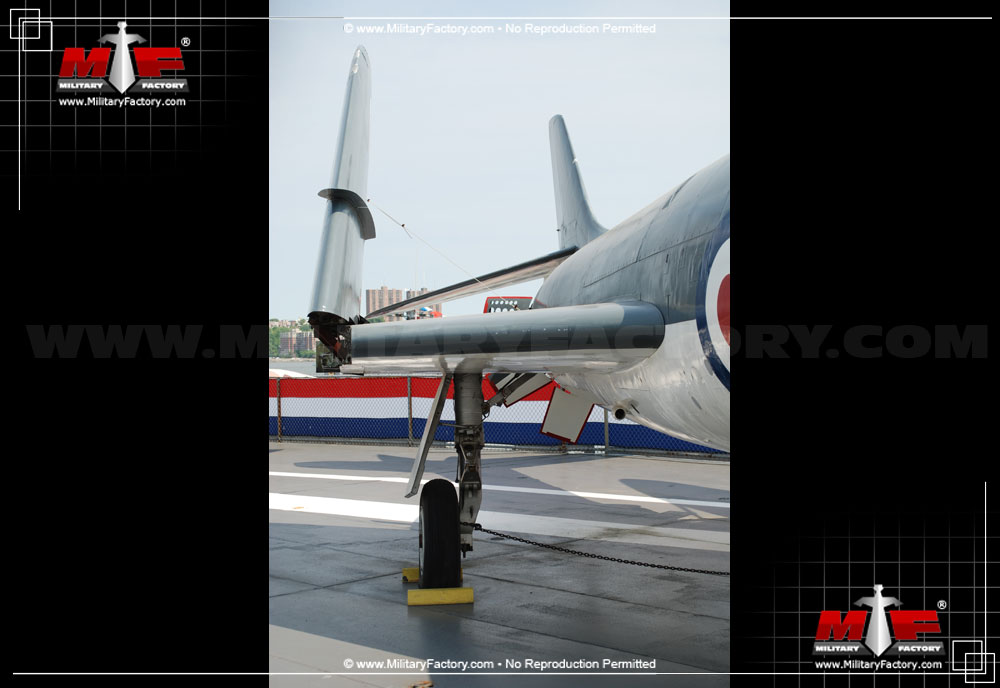 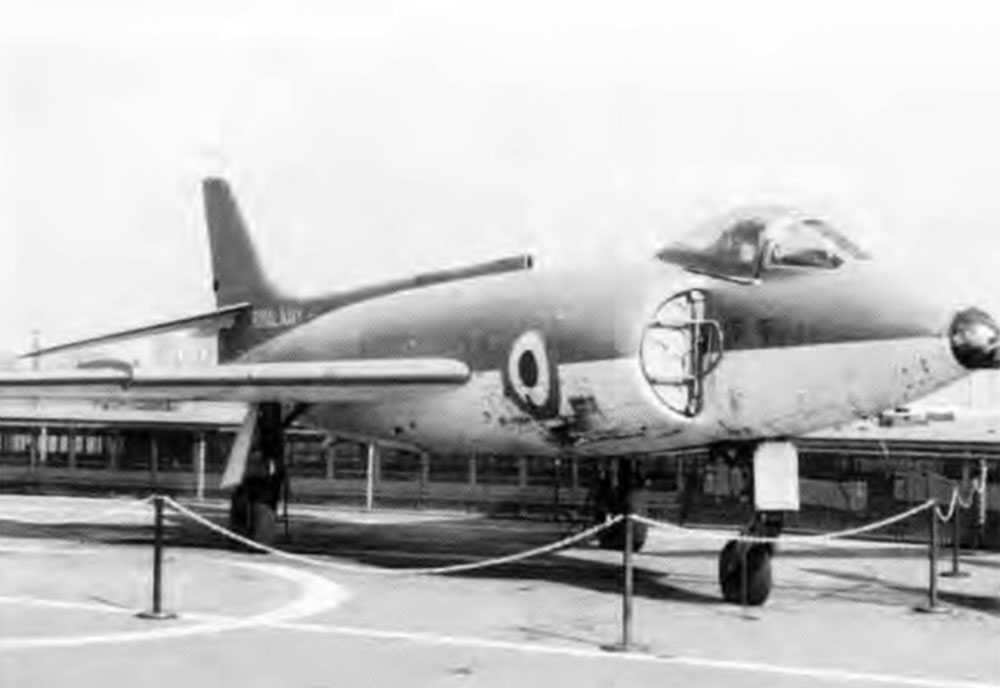 Front right side view of a Supermarine Scimitar on display
❮ ❯