Authored By: Staff Writer | Last Edited: 03/07/2022 | Content ©www.MilitaryFactory.com | The following text is exclusive to this site. 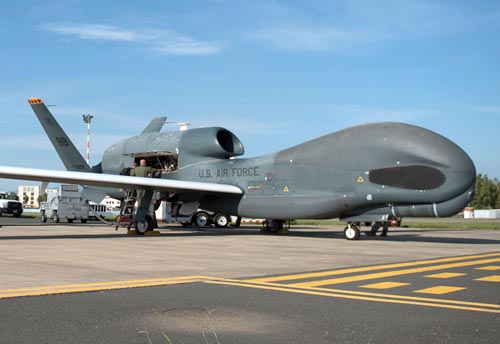 The Northrop Grumman "Global Hawk" is a large-scale Unmanned Aerial Vehicle (UAV) utilized by the United States Air Force and Navy branches of service for long-range / high-endurance intelligence-gathering, target identification and general reconnaissance. As one of the dimensionally-larger UAVs in the American military inventory, the Global Hawk system benefits from inherently good operational ranges, allowing ground commander and warplanners the priceless quality of extended loiter times. To date, the system is fielded by both the American and German militaries while, at $104 million per unit, it has not seen large-scale production or use. As of this writing (2013) approximately 47 units are in operational service - most with the United States Air Force while a single example is in service with German forces as the "Eruo Hawk".

The Global Hawk features the most distinct form of any operational UAV today. While its general configuration is that of a conventional aircraft, the aircraft sports unique shape full of style and contours. The nose cone is bulged for the requisite sensor equipment within and well-contoured to the fuselage to promote a streamlined shape. The fuselage tapers at the rear in the usual shape. The engine is mounted atop the aft portion of the spine, identified by the intake used for aspiration of the powerplant and its exhaust port at the rear over the fuselage. The tail section is capped by two outward-angled vertical tail fins and a pair of underfuselage ventral strakes. The main wing assemblies are straight in their overall design and low-mounted along the sides of the fuselage. The Global Hawk makes use of a wholly retractable undercarriage. There are no horizontal tail planes.

The Global Hawk features an internal sensory suite provided by Raytheon and Hughes while the aircraft itself is operated through a satellite managed data link. This data link allows for full transference of information - in the form of video and pictures - to sources on the ground (when within range of ground receivers). As with most modern UAVs, the Global Hawk tracks its position via GPS and does not expose allied pilots to enemy dangers or inclement weather.

The Global Hawk has been under consideration with several US-friendly allies including Australia, Canada, Japan and South Korea (and possibly India and New Zealand as well). An off-shoot of the RQ-4 was developed for the German Luftwaffe as the RQ-4B "EuroHawk". This particular model was fitted with specialized EADS reconnaissance equipment and arrived in Germany in July of 2011. The Luftwaffe intends to procure an initial batch of 5 aircraft including the existing model already in use. In service, the Global Hawk can replace larger-scale, human-crewed operational reconnaissance platforms as it would for the Germans (currently relying on the Dassault-Breguet Atlantique as its reconnaissance platform). NATO is considering the NATO AGS (Alliance Ground Surveillance) version which remains in development. As many as five may be procured by project's end.

The Global Hawk family initially arrived in the Block 0 form, the first 7 Advanced Concept Technology Demonstration Aircraft. Of these, 3 have been lost operationally while 3 were handed over to NASA and a sole example ended up as a museum piece. The Block 10 initiative saw 9 examples produced of which 2 became museum pieces, 2 were sent to NASA and 5 were handed to the United States Navy (1 example was lost operationally). The Block 20 initiative saw 6 produced for the United States Air Force of which 4 were outfitted with communications relay equipment and 2 utilized as testing platforms. The Block 30 endeavor has seen 16 aircraft built for the USAF with 31 total planned. While 21 have been approved by the US government, some 10 may be cancelled due to budget constraints. The Block 40 initiative is the latest Global Hawk form and is currently in development with 8 airframes completed.

The Global Hawk holds an aviation first as being the first unmanned aircraft to fly across the Pacific Ocean when it undertook the feat from Edwards AFB, United States to RAAF Base Edinburgh, Australia on April 24th, 2001.

The US Navy is trialing a dedicated over-water form in the "Triton" BAMS (Broad Area Maritime Surveillance) variant of which 68 are optimistically planned for procurement. The aircraft has been given the formal designation of MQ-4C "Triton" with at least five Global Hawks modified for the trials with a demonstrator lost to accident in June of 2012. Should all go as planned, the USN will begin fielding these sometime in 2015.

The Global Hawk program is currently (2013) under the crosshairs in terms of the US military long-term budget. The system, while capable, has proven an expensive addition to the USAF lineup, particularly in the cost associated with operations and image transference. It may very well be decided that Northrop Grumman's product is shelved for the interim and several airframes mothballed if authorities realize the gains from such a large UAV system do not offset the program costs. The Block 40 initiative may very well not see the light of day as the USAF begins centering back on the Lockheed U-2 for its surveillance need. Northrop Grumman is attempting to streamline costs of Global Hawk Block 30 aircraft to reverse the USAF direction.©MilitaryFactory.com
Note: The above text is EXCLUSIVE to the site www.MilitaryFactory.com. It is the product of many hours of research and work made possible with the help of contributors, veterans, insiders, and topic specialists. If you happen upon this text anywhere else on the internet or in print, please let us know at MilitaryFactory AT gmail DOT com so that we may take appropriate action against the offender / offending site and continue to protect this original work.

May 2013, it was announced that Germany had stopped its quantitative purchase of the "Euro Hawk" due to local certification issues, relying solely on its single example for sensor testing in the interim. In January of 2015 it was announced that the country may pursue the Northrop Grumman Triton instead.

June 2015, Northrop Grumman demonstrated the ability to upgrade an older Global Hawk by seamlessly installing a modern RQ-4B Block 40 airborne database computer. This was done to a pre-production Global Hawk system currently operated by NASA and considerably broadened its inherent mission capabilities in short order. The updated package provides the operator with the ability to communicate with multiple payloads fitted to the unmanned system.

February 2016 - A Global Hawk aircraft was flight-tested with the UTAS SYERS-2C sensor in a ventral pod fitted aft of the nose leg.

December 2016 - The RQ-4 series is expected to fly for the USAF until the mid-2030s - its major drawback being its inability to operate in contested airspaces.

June 2017 - An RQ-4 Global Hawk crashed while flying over California airspace. The result of the inquiry has blamed procedures related to the quadruplex redundancy system related to the product's navigational suite.

June 2019 - Iran has claimed to have shot down an RQ-4A Global Hawk belonging to the United States military, claiming the UAV had entered Iranian airspace.

September 2019 - Showing off their versatility, the RQ-4 has been selected by the USAF to conduct testing related to hypersonic weapons.

December 2019 - The first of four Global Hawk UAV units has been delivered to South Korea.

July 2020 - A third Global Hawk example has arrived for service in Italy for NATO forces. The aircraft, of the radar-reconnaissance-minded RQ-4D variant, will serve with NATO Alliance Ground Surveillance Force (NAGSF). the aircraft flew nonstop from Edwards AFB, California to Sicily, Italy.

September 2020 - The U.S. Department of Defense is looking into modification of the RQ-4 UAV for the Hypersonic Telemetry role in assisting hypersonic glide vehicles by collecting vital data during flight testing.

November 2020 - NATO has taken delivery of its fifth, and last, Global Hawk to make up the NATO Alliance Ground Surveillance Force (NAGSF).

February 2021 - NATO has declared its NAGSF fleet as operational. The fleet will headquarter from Sigonella, Sicily.

(Showcased performance specifications pertain to the base Northrop Grumman RQ-4 Global Hawk production variant. Performance specifications showcased above are subject to environmental factors as well as aircraft configuration. Estimates are made when Real Data not available. Compare this aircraft entry against any other in our database or View aircraft by powerplant type)
None. Internal payload for mission equipment of up to 2,000 lb depending on production model and configuration.

General Assessment
Firepower
Performance
Survivability
Versatility
Impact
Values are derrived from a variety of categories related to the design, overall function, and historical influence of this aircraft in aviation history.
Overall Rating
The overall rating takes into account over 60 individual factors related to this aircraft entry.
78
Rating is out of a possible 100 points.
Relative Maximum Speed
Hi: 500mph
Lo: 250mph
This entry's maximum listed speed (404mph). 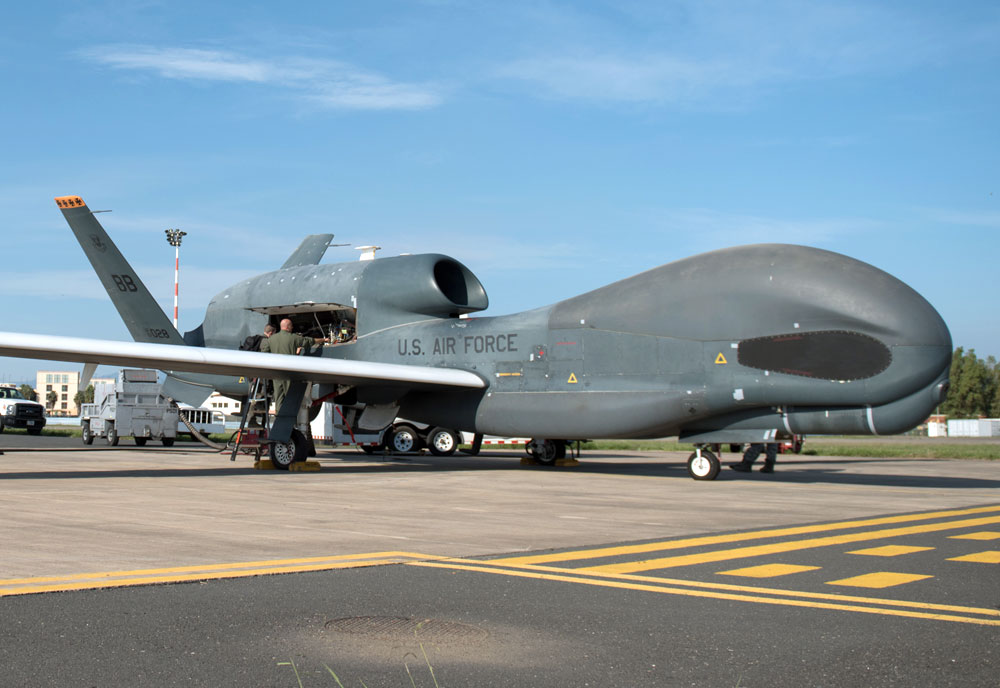 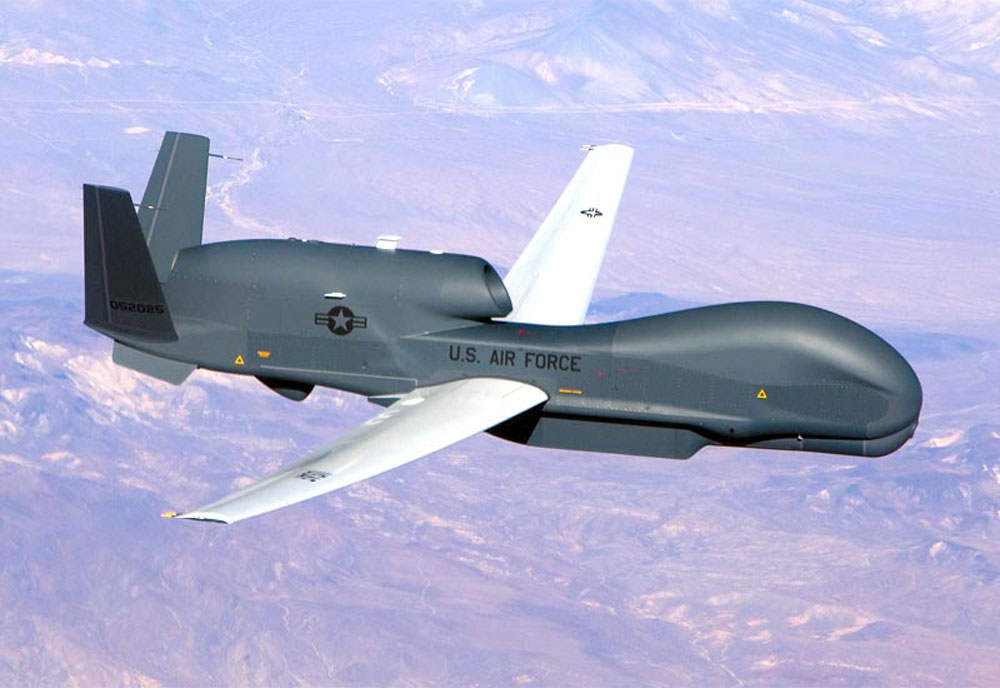 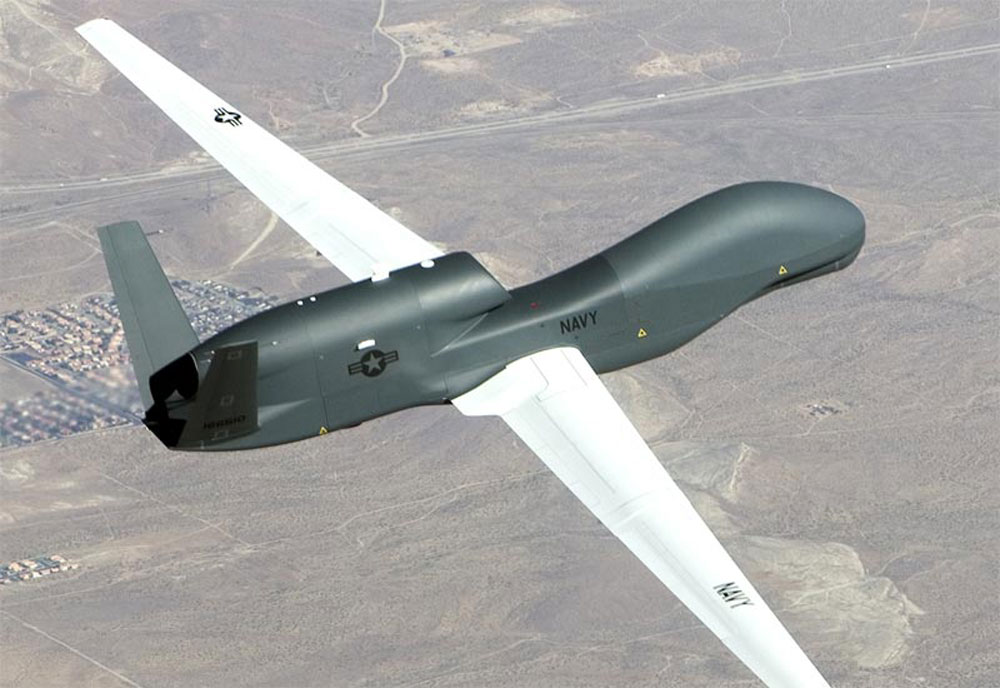 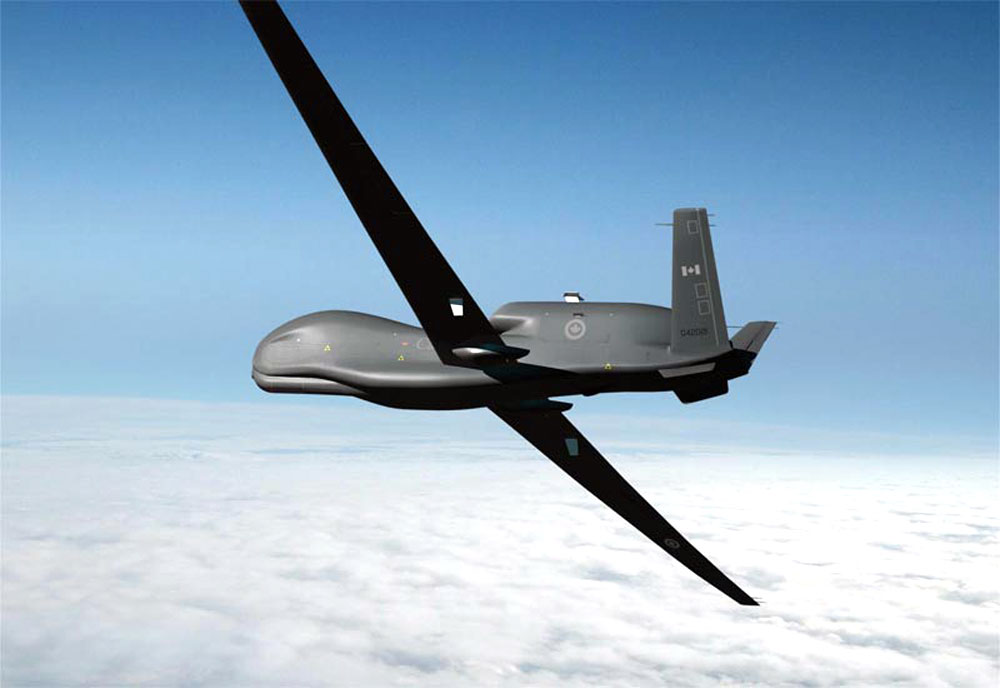 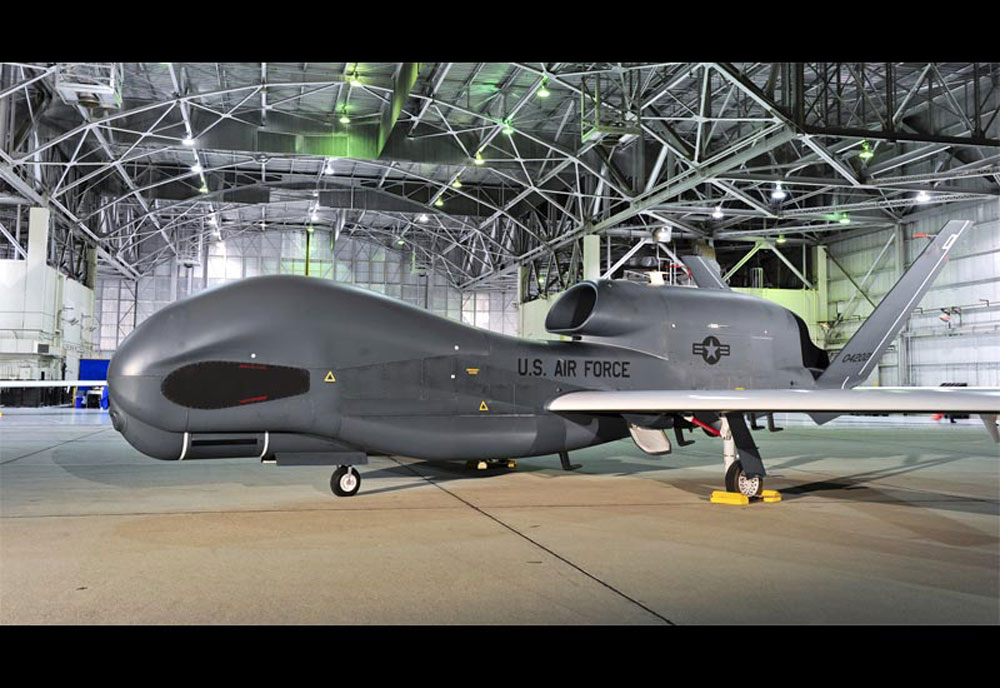 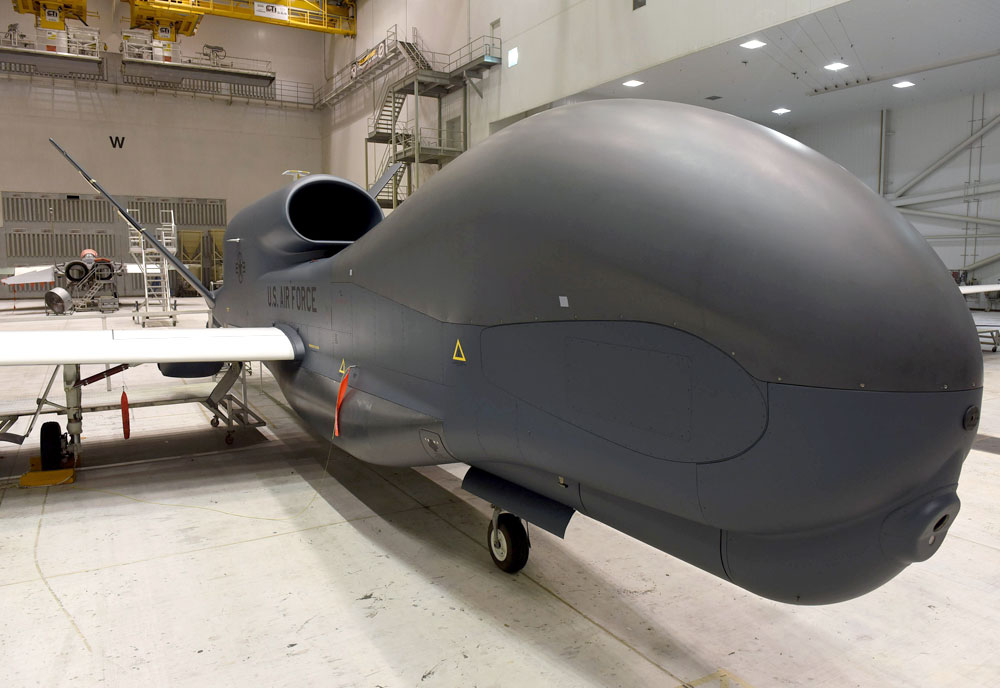 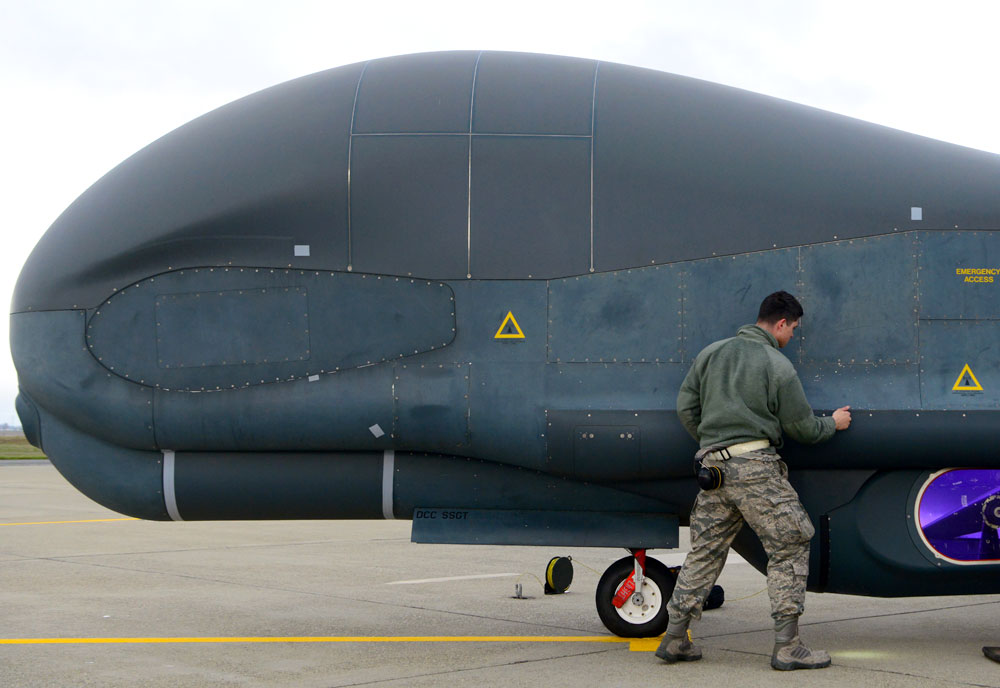 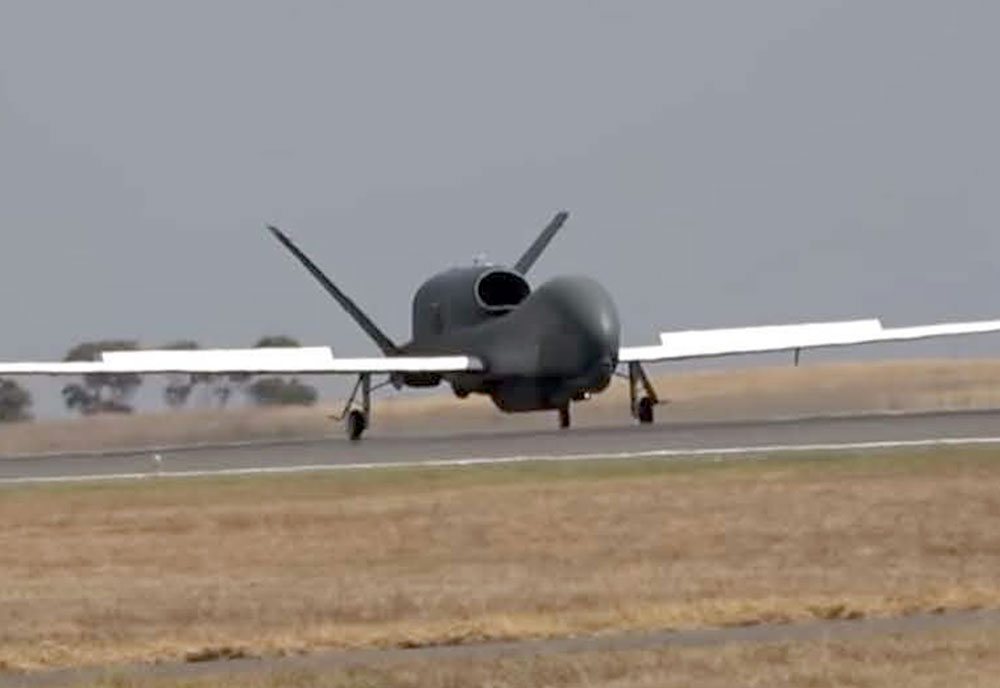 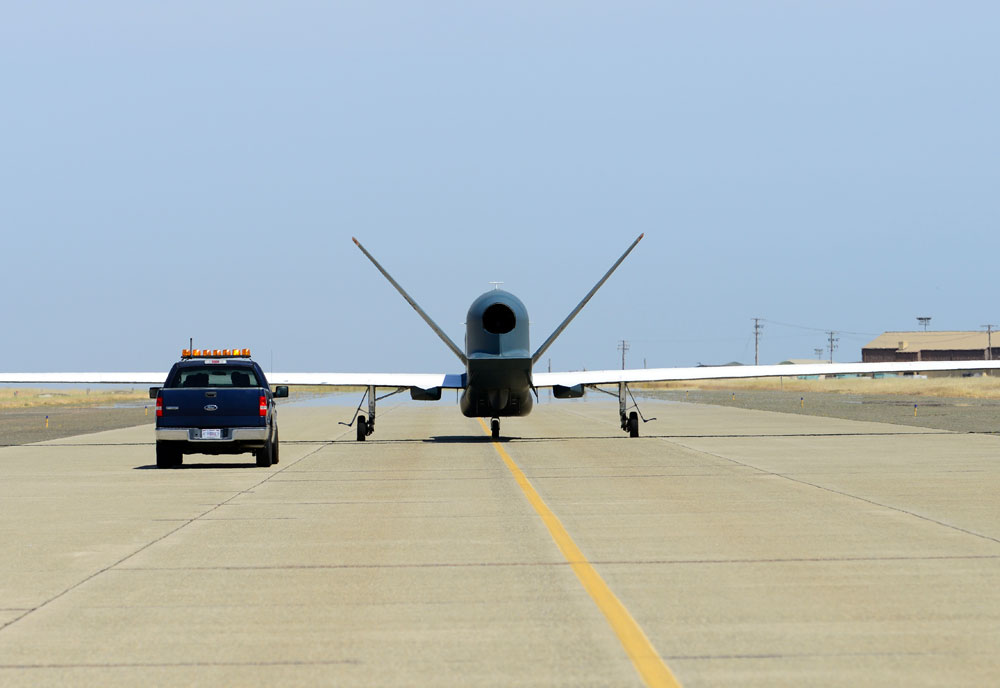 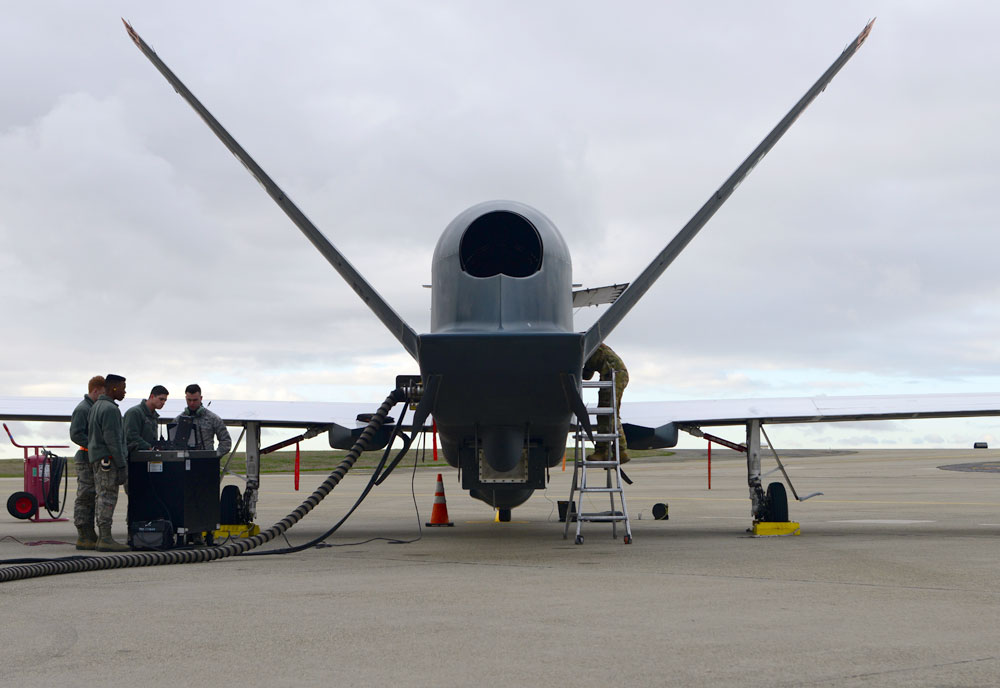 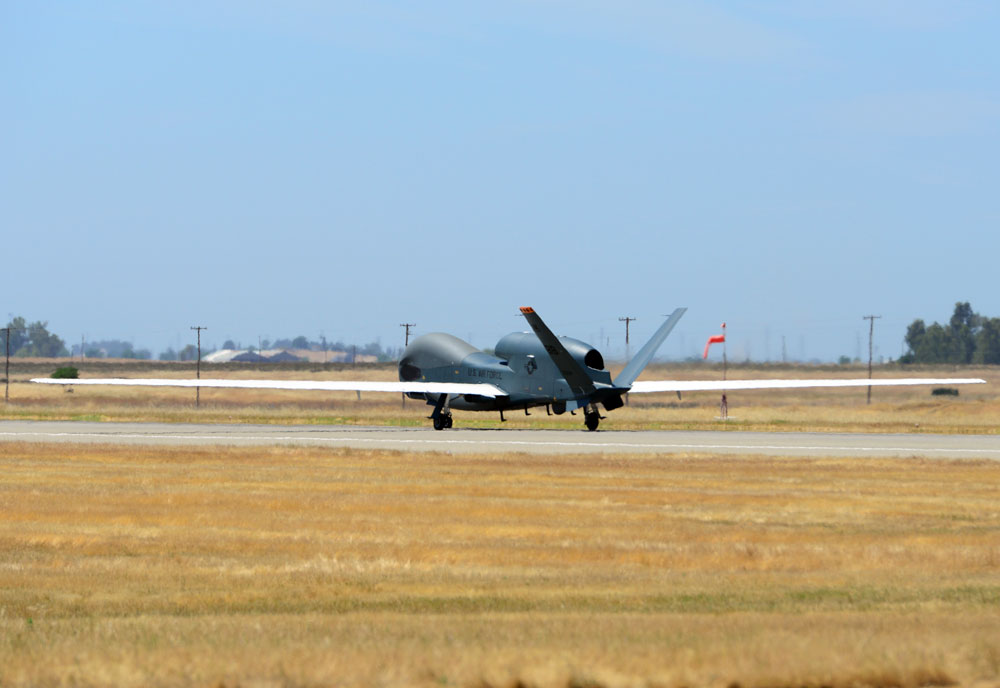 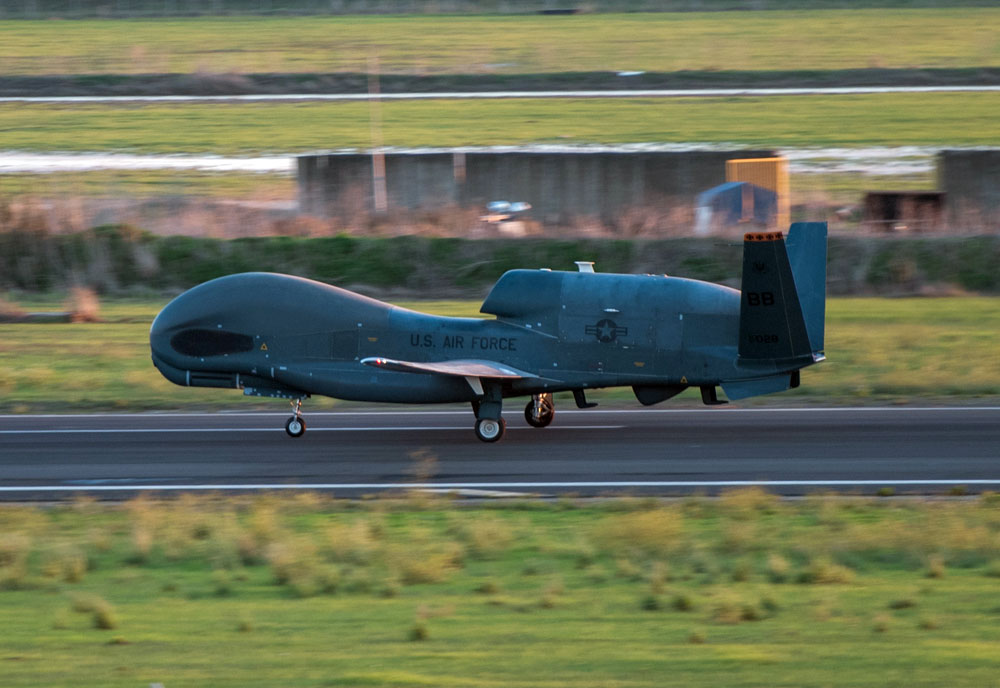 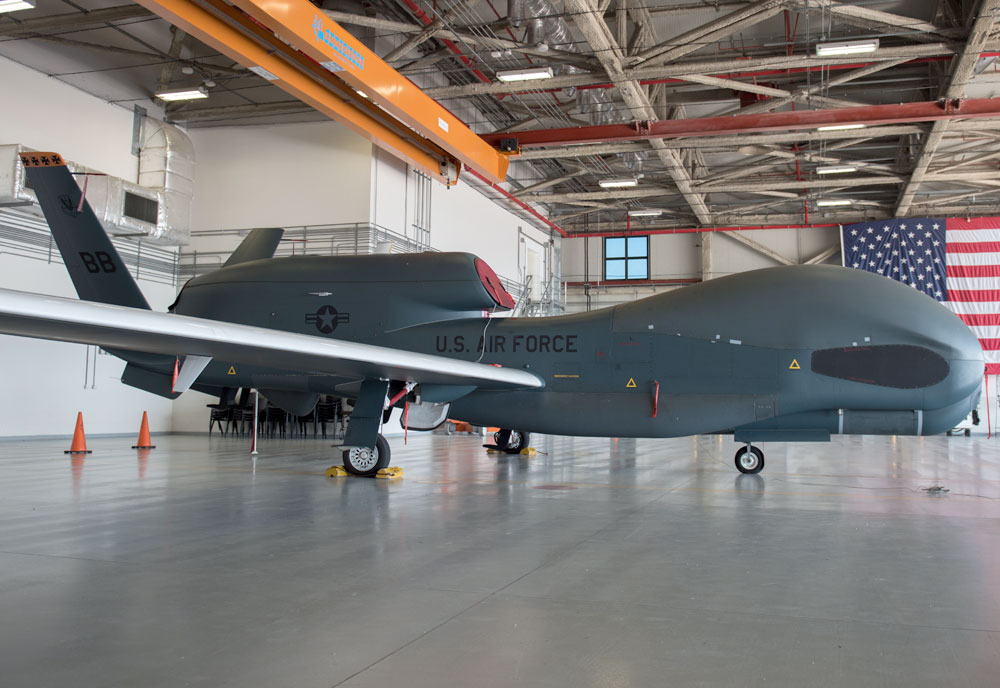 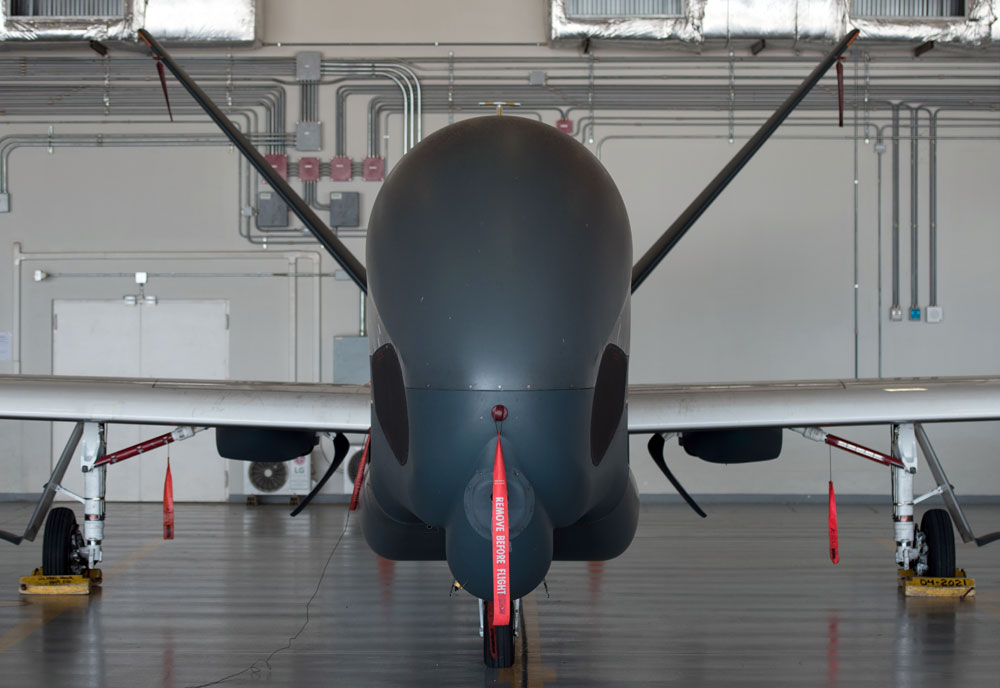 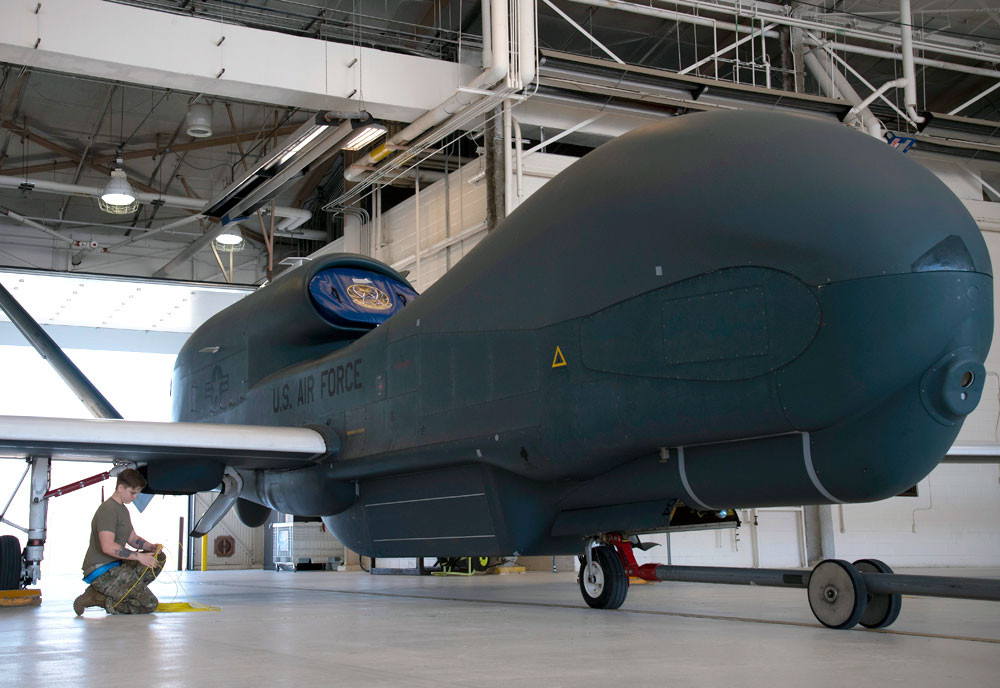