Developed under a veil of secrecy, the iconic Lockheed F-117 Nighthawk became the first stealth aircraft to reach operational status.

Authored By: Staff Writer | Last Edited: 02/25/2021 | Content ©www.MilitaryFactory.com | The following text is exclusive to this site. 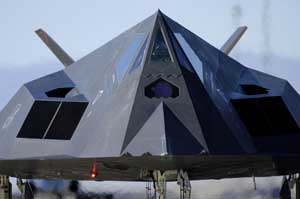 The F-117 Nighthawk achieved global fame in the 1991 air war against Iraq. The aircraft was the world's first operational stealth platform and maintained a stellar service record during her tenure. Due to her advanced nature, the aircraft was held under strict secrecy for nearly a decade before a formal confirmation of her existence was announced by US authorities. From then on, the type went on to see combat service throughout several major global wars and subsequently maintained a stellar service record no doubt due to her unique qualities and expert pilot training. Despite the common nickname of "stealth fighter", the F-117 is in fact a strike-minded aircraft with qualities more akin to a bomber than a true fighter aircraft - she maintained no onboard cannon and was generally fielded with air-to-ground munitions.

From its inception, the Lockheed F-117 "Nighthawk" was designed as a fully-capable, ground-attack "stealth" platform capable of traversing enemy airspace undetected and unleashing a potent munitions load against predetermined targets via laser guidance. Despite her highly futuristic appearance for the time, the F-117 was actually a design dating back to the late 1970s under the XST (eXperimental Stealth Technology) "Have Blue" project moniker. Lockheed's "Skunk Works" was awarded funding by the United States Air Force for the endeavor to which a pair of prototypes were delivered. The USAF requirement sought a new breed of strike aircraft that could fly undetected through enemy air defenses and deliver precision weapons.

Lockheed engineers chose a very dramatic planform utilizing sharp angles where possible - even featuring inward swept tail planes. The two General Electric CJ610 non-afterburning turbofan engines were buried deep within the fuselage to lower the aircraft's heat signature. The aircraft was operated by a single pilot who was assisted by computerized facilities as needed. As the general shape of these prototypes were quite unconventional, technology played an increased role in helping the airframe remain aloft without encountering grievous stability issues. The first flight of a Have Blue prototype occurred out of Lockheed's Groom Lake, Nevada facility in December of 1977. Despite the amount of engineering work and technology put into the original Have Blue prototypes, physics proved to have the final say and both were eventually lost to accident by 1980.

Official design and development work on a production form based on the prototypes was started in November of 1978 under the marker of "Senior Trend". Five FSD (Full-Scale Development) flight test aircraft followed with the first going airborne in January of 1981. These versions differed from the Have Blue prototypes in that they were an overall larger shape and the tail planes were now angled outwards from centerline. With the program having passed her required milestones, the first production quality aircraft - now designated by the US Air Force as the F-117A "Nighthawk" - was delivered into inventory in August of 1982. The Nighthawk became the first fully operational "stealth" aircraft anywhere in the world in October of 1983.

The most obvious of the radar-deflecting/absorbing qualities of the F-117 was its unique lifting body shape, utilizing a multi-faceted angular approach that served to distort or reflect incoming radar emissions. Even the canopy sported a sharply crowned apex and minimal windows. The fuselage spine ran down from the cockpit to form the base of the aircraft at the extreme aft of the design. Air intakes were covered over with special heated "screens" and the engine exhaust ports at the rear were barely noticeable slotted horizontal ports that disperse heated air quickly to avoid generating a noticeable plume. Additionally, the F-117 was covered over in a radar absorbing finish (RAM = Radar Absorbent Material) that provided the aircraft with its one-of-a-kind flat-black appearance. As the production General Electric F404 series turbofan engines did not utilize afterburning for improved speed, the Nighthawk can further minimize its heat signature to prying eyes. Ordnance carrying capabilities were inherently limited for all were held inside of a rectangular internal bomb bay. This often led to the aircraft fielded a pair of laser-guided 2,000lb bombs. It was only during the instance of opening the bomb bay doors that an F-117 pilot might give away his/her position to enemy radar. From an underside profile, the F-117 maintained a truly delta planform and became highly recognizable to even the most casual of observers. The undercarriage was highly conventional and made up of two single-wheeled legs and a single wheeled nose landing gear leg.©MilitaryFactory.com
Advertisements

The F-117 pilot was not afforded a traditional radar system within the cockpit of his Nighthawk but he did have access to an advanced navigation and attack system for precision weapons delivery. Infra-red forward/downward looking devices were also installed. In fact, the instrument panel of the F-117A was more reminiscent of a 1970s fighter than any high-tech platform, complete with circular dials, needle gauges and illuminated block lights. Thrust control was offset to a left-hand instrument panel with flight and weapons delivery controls set on a conventional flight stick between the pilot's knees (HOTAS = Hands On Throttle and Stick).

The F-117 was initially assigned to the USAF's 4450th Tactical Group at the Tonopah Test Range. The deliveries occurred in strict secrecy with training only being undertaken in the dark of night so as to not arouse local suspicion. In late 1988, the USAF could no longer maintain the aircraft in total secrecy formally acknowledged the existence of its stealth fighter. From then on, the aircraft was allowed to operate in daylight. The F-117 eventually went on to equip the 37th Fighter Wing which absorbed the 4450th. The 49th Fighter Wing out of Holloman also flew the mount from 1991 to 2008. Nighthawk pilots became known as "Bandits" and there were only a select 558 individuals by the end of the aircraft's tenure.

The F-117A was debuted in combat during the American invasion of Panama to unseat dictator Manuel Noriega in December of 1989, dropping a pair of bombs onto the Rio Hato airfield. But it was the 1991 Gulf War effort to help repel Iraqi ground forces from US ally Kuwait that the F-117A took center stage - tackling 40% of all destroyed enemy ground targets despite they making up just 2.5% of the coalition air power in the region. Nighthawks was particularly active during the first day of attacks and 42 F-117As flew over 1,200 sorties by the end of the conflict. The F-117A went on to be fielded in 1999's Operation Allied Force over Bosnia-Kosovo which recorded the only downing of the type by the Army of Yugoslavia. The Nighthawk was back in action during Operation Enduring Freedom over Afghanistan in 2001 following the events of 9/11 and during Operation Iraqi Freedom in 2003 - the latter marking her final combat actions before being removed from USAF service.

The F-117 underwent a slight upgrade program that improved her navigational system and the intent was to keep the series aloft until 2015. However, maintenance costs, time and ever-improving technology eventually passed her by and she was formally retired on April 22nd, 2008. The Lockheed flagship fighter - the F-22 Raptor - has since taken her place soon to be joined by the multi-role F-35 Lightning II, also by Lockheed. By the end, just 59 of the exceptional and revolutionary Nighthawks were delivered to the USAF at a cost of $42.6 million per unit. In all, the Lockheed stealth program set American tax payers back some $111.2 million. The final F-117A was deactivated on August 1st, 2008.

No other F-117 variants were ever designated beyond the original A-models and none were ever offered up for export purchases, showcasing just how important the stealth technology utilized in the F-117 really was.©MilitaryFactory.com
Note: The above text is EXCLUSIVE to the site www.MilitaryFactory.com. It is the product of many hours of research and work made possible with the help of contributors, veterans, insiders, and topic specialists. If you happen upon this text anywhere else on the internet or in print, please let us know at MilitaryFactory AT gmail DOT com so that we may take appropriate action against the offender / offending site and continue to protect this original work.

February 2021 - A pair of F-117A stealth fighters have been identified flying over Los Angeles, California, assumed to be flying in the 5th Generation aggressor training role. The pair were spotted with an aerial refueling tanker aircraft during a daytime exercise.

(Showcased performance specifications pertain to the Lockheed F-117A Nighthawk production variant. Performance specifications showcased above are subject to environmental factors as well as aircraft configuration. Estimates are made when Real Data not available. Compare this aircraft entry against any other in our database or View aircraft by powerplant type)
STANDARD (Internal Bomb Bay:
2 x 2,000lb laser-guided / precision-guided bombs or conventional drop bombs carried in an internal bomb bay.

XST "Have Blue" - Program Prototype Designation of which two were produced to the "Experimental Stealth Technology" requirement.
FSD - Developmental models of which five were produced.
F-117A - Initial Production Model of which 59 were produced. 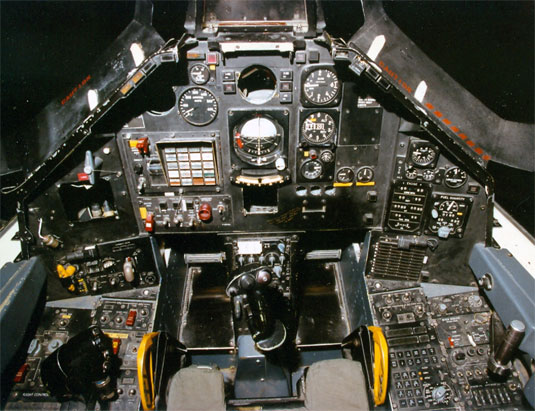 General Assessment
Firepower
Performance
Survivability
Versatility
Impact
Values are derrived from a variety of categories related to the design, overall function, and historical influence of this aircraft in aviation history.
Overall Rating
The overall rating takes into account over 60 individual factors related to this aircraft entry.
70
Rating is out of a possible 100 points.
Relative Maximum Speed
Hi: 750mph
Lo: 375mph
This entry's maximum listed speed (646mph). 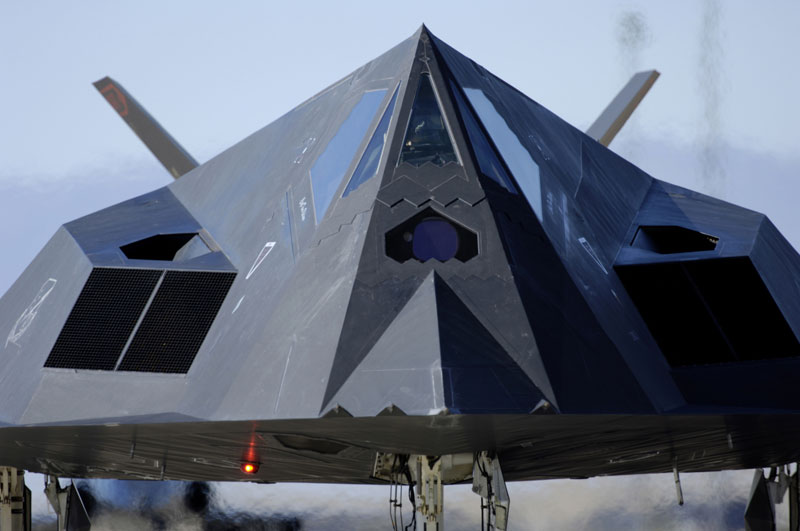 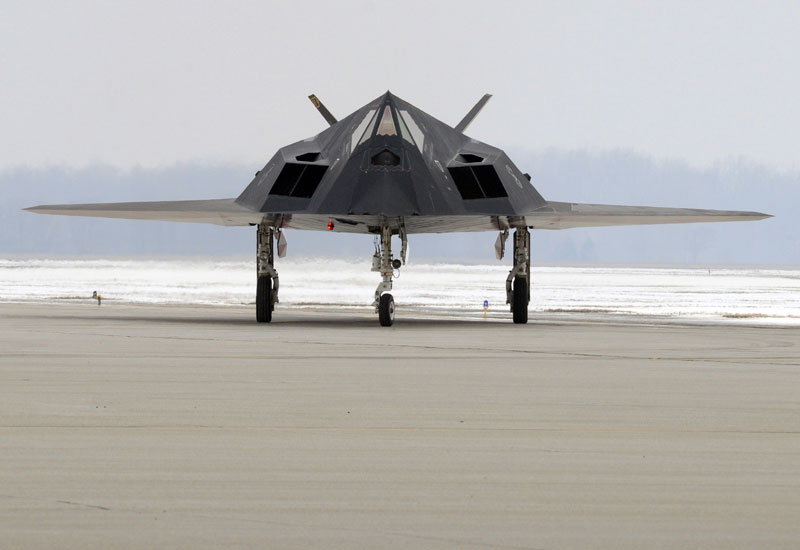 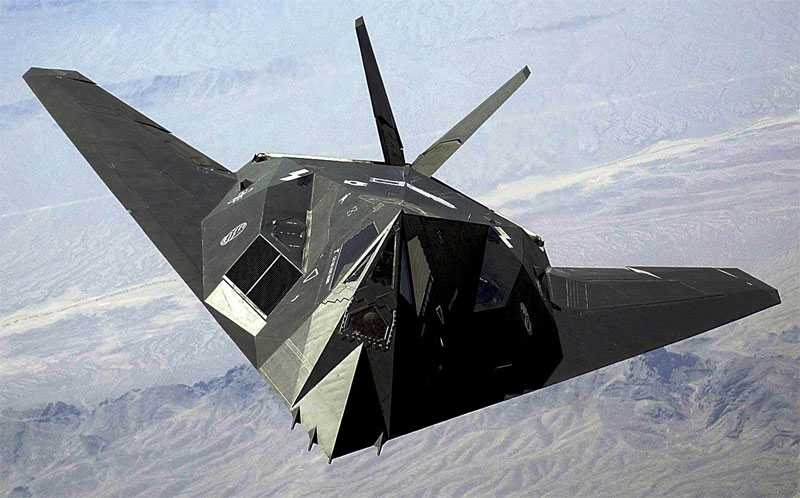 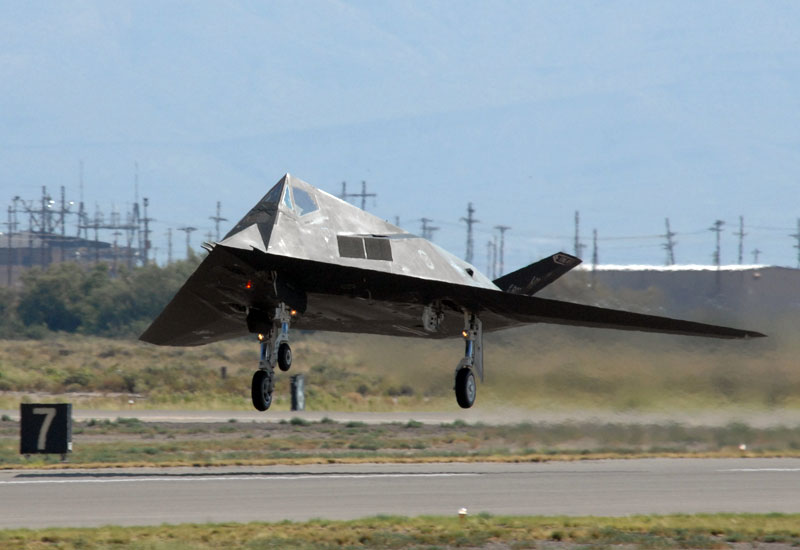 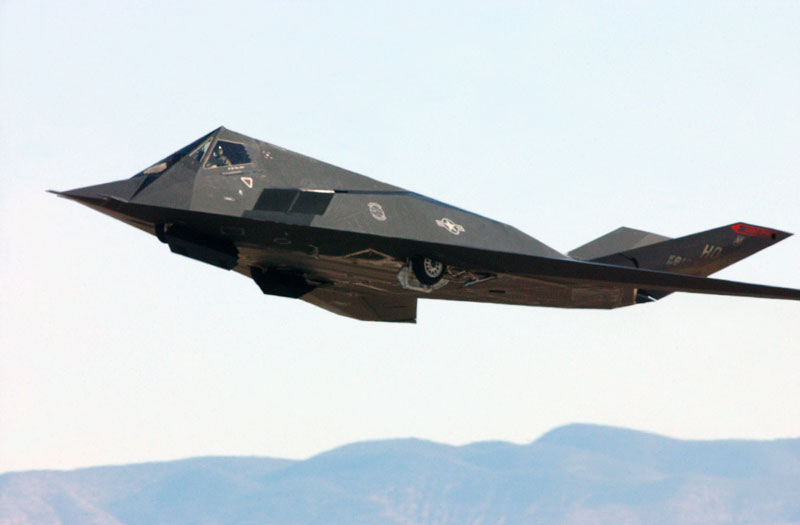 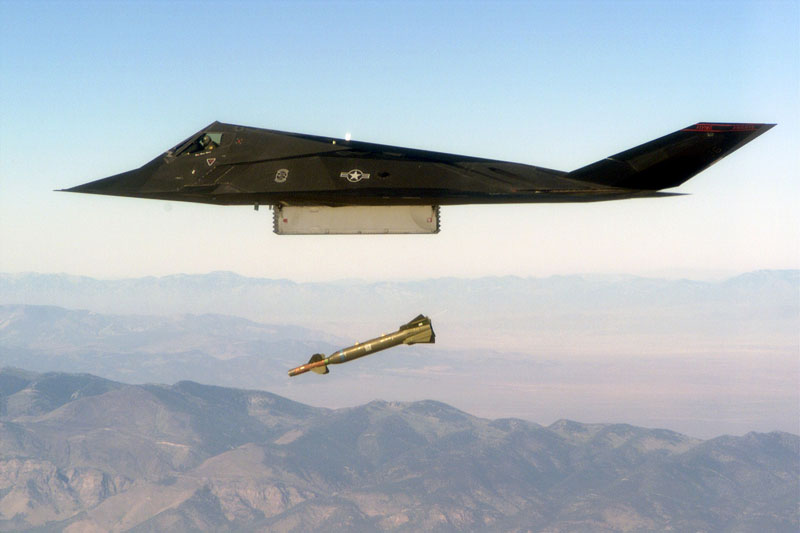 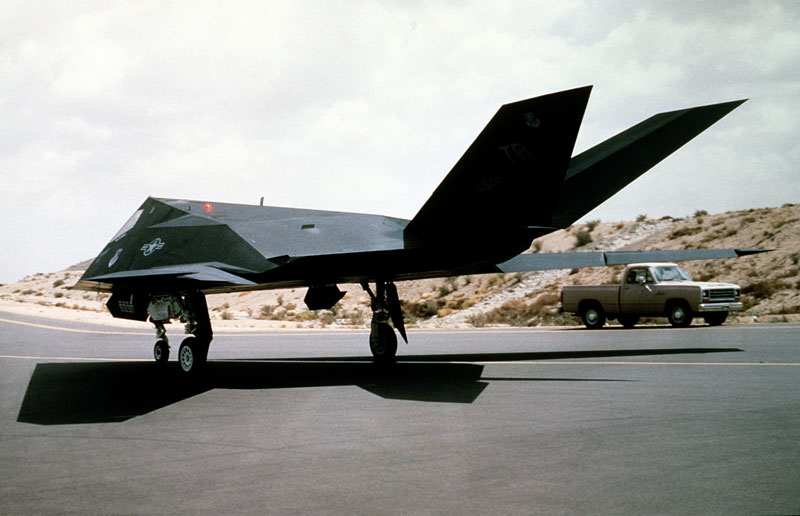 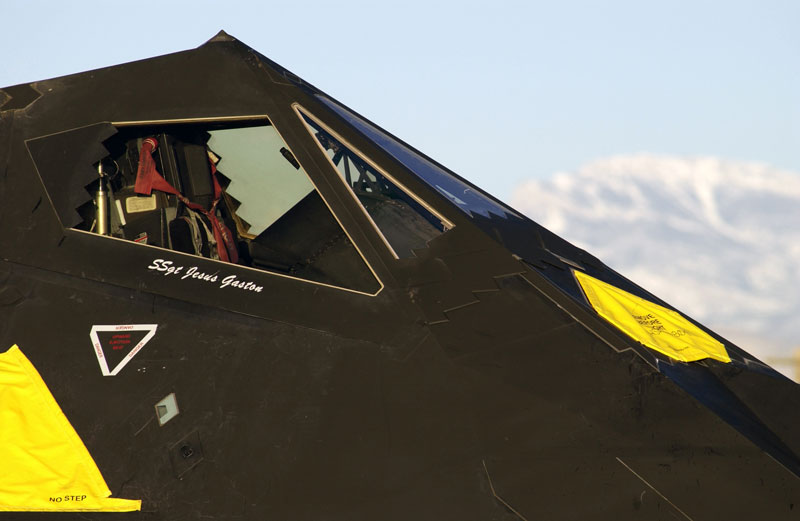 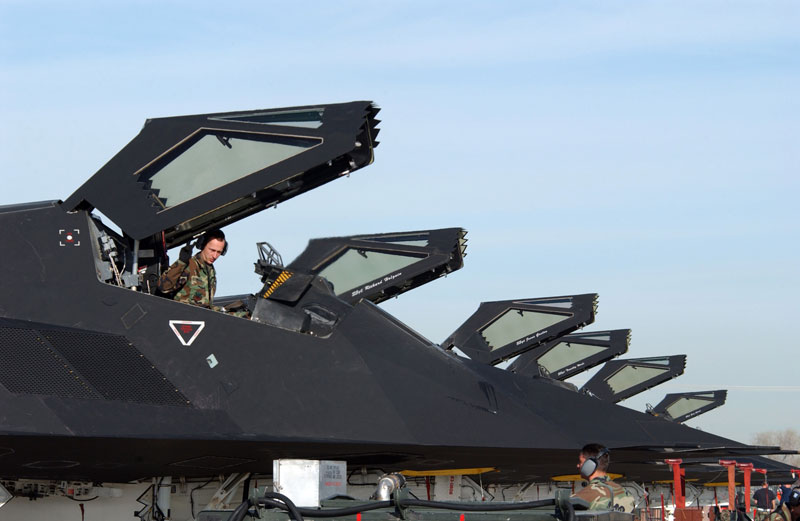 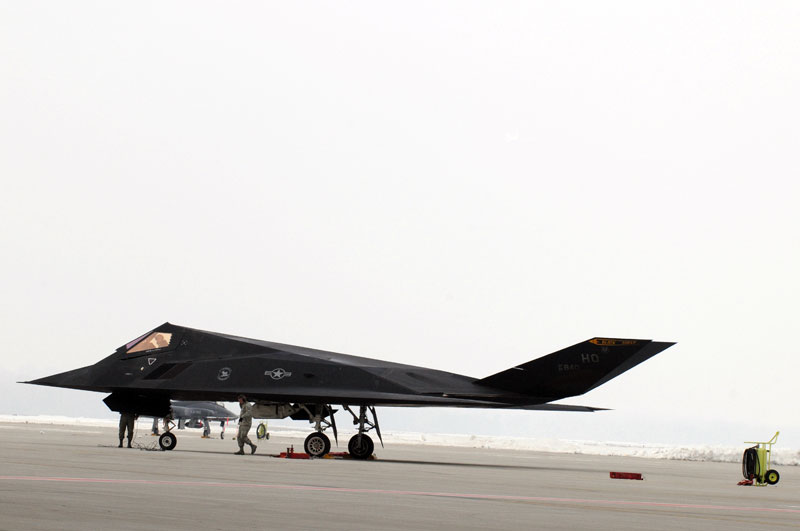 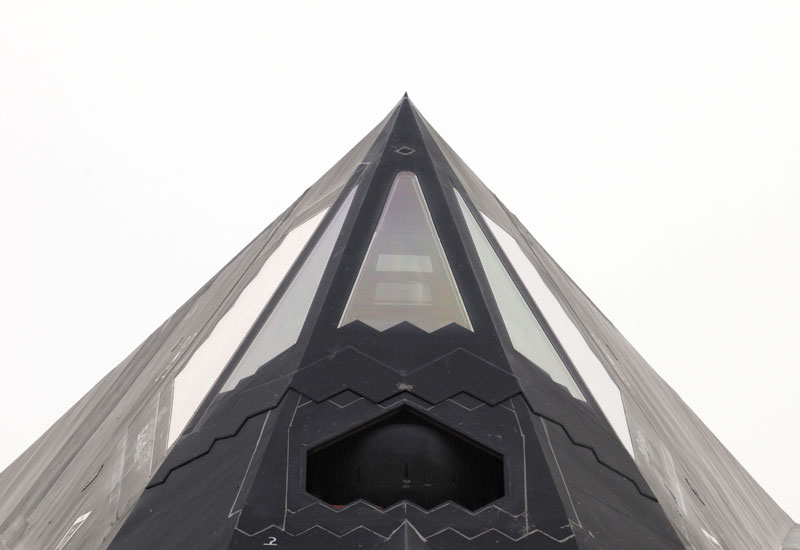 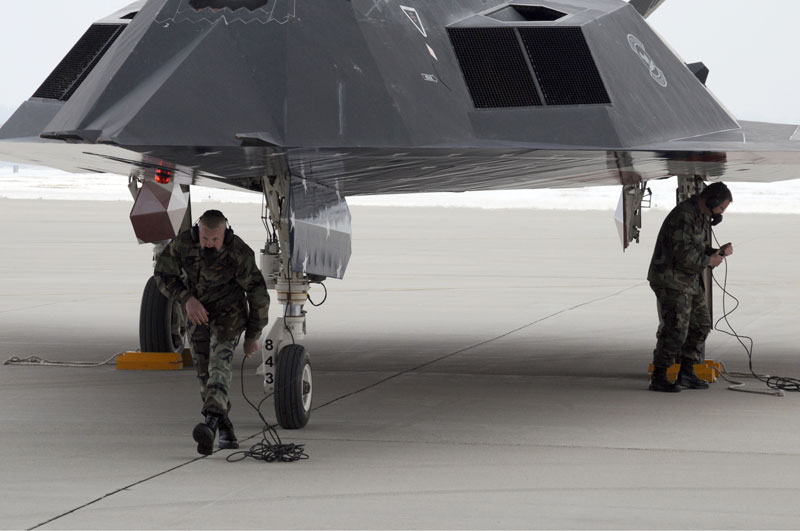 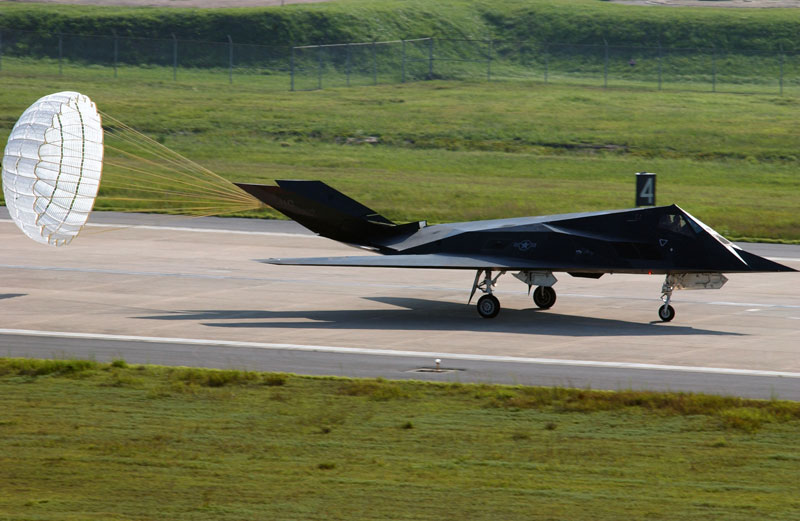 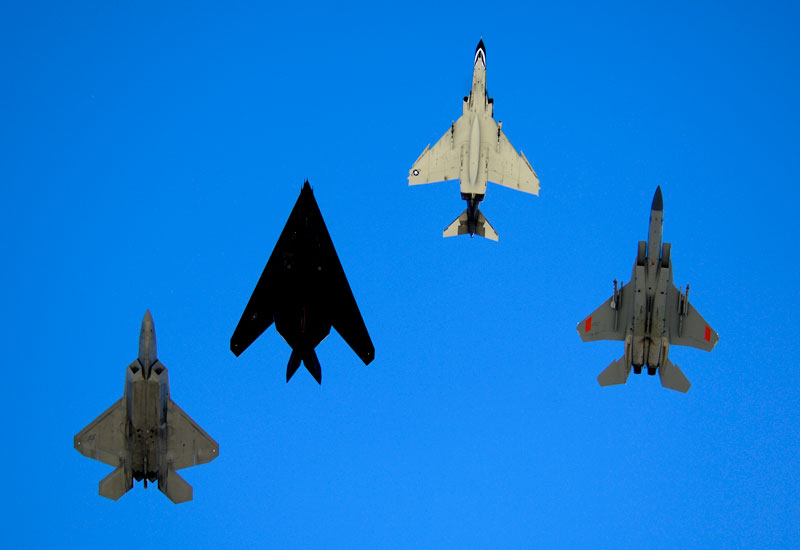 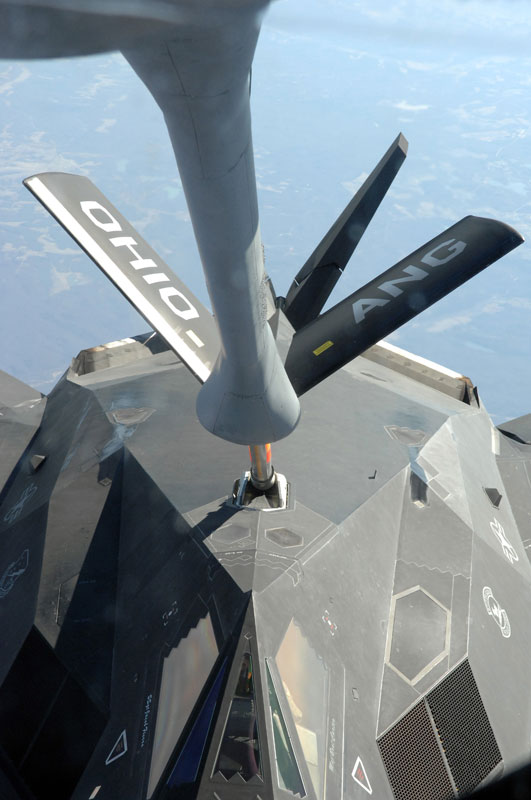