Authored By: Staff Writer | Last Edited: 04/17/2022 | Content ©www.MilitaryFactory.com | The following text is exclusive to this site. 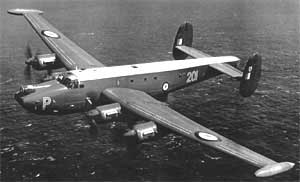 The Avro Shackleton was derived from the Avro Lincoln bomber (the Lincoln itself designed from the Avro Lancaster), a four-engine aircraft appearing too late to see action in World War 2. The Shackleton featured a similar (though all-new) fuselage design and became the primary RAF long-range maritime patrol platform in the early years of the Cold War. The aircraft went on to fulfill a variety of other roles until its eventual retirement in 1990.

The Shackleton was designed to a 1946 requirement for an all-new long-range maritime patrol aircraft for use by the Royal Air Force Coastal Command. The Avro offering was initially known as the Lincoln ASR.3 and would later become known simply as Type 696 Shackleton (named after English explorer Ernest Shackleton). First flight was achieved on March 9th, 1949.

The Avro Shackleton shared some design similarities with the Lincoln. Both aircraft featured a slender straight-sided fuselage with the aft end extended out past the tail plane. The tail plane also featured twin vertical fins in much the same way as that of Lincoln design. The Shackleton was also fitted with a low-wing monoplane with two engines to a wing and each engine was fitted with two three-blade propellers in a contra-rotating fashion - the first such British four-engine aircraft to do so. Power was delivered by 4 x Rolls-Royce Griffon liquid-cooled in-line engines. The Griffons were noted for requiring a great deal of attention during the aircraft's career. Armament in the Anti-Submarine Warfare (ASW) role consisted of 2 x 20mm cannons mounted in the nose while internal bombloads could consist of torpedoes, mines and bombs as needed.

The initial MR.1 Shackleton production models entered service in April of 1951 with No. 120 Squadron based in Scotland. The MR.2 appeared later (with changes brought about through operational feedback) and was noted for its ventral-placed radome as opposed to the chin-mounted placement of its forerunner. Additionally, the MR.2 featured a reinforced undercarriage, a lengthened nose and tail section and redesigned tail planes.

The MR.3 would later appear with a whole host of changes thanks again to operational feedback. These changes would include wingtip-mounted fuel tanks, a larger fuselage, sleeping galley for the crew on long flights, redesigned wings and a tricycle undercarriage. Future MR.3's would incorporate the Armstrong Siddeley Viper turbojet in the outboard engine nacelles for increased power on take-offs due to the increased weight, these being noted by their designation of MR.3 "Phase II".

Beyond RAF use, the Shackleton was delivered in a batch of eight to the South African Air Force (replacing their Short Sunderlands). Shackletons served the British as Airborne Early Warning (AEW) platforms (designated AEW.2) until its inevitable replacement by the nation's purchase of E-3 Sentry units in 1991 over the Nimrod AEW model vying for the role. Other roles undertaken by the Shackleton in that time included Search and Rescue (SAR) and Maritime Patrol Aircraft (MPA). South African models were in service up until 1984.

Shackletons saw their first real use in the Suez Crisis of 1956, the combined British, Israeli and French attack on Egypt after the Egyptian attempt to nationalize the Suez Canal. Production totals for each model type numbered 77 for the Mk 1 series, 70 for the Mk 2 series and 34 for the Mk 3 series with a further 8 of that batch for use in the South African Air Force.©MilitaryFactory.com
Note: The above text is EXCLUSIVE to the site www.MilitaryFactory.com. It is the product of many hours of research and work made possible with the help of contributors, veterans, insiders, and topic specialists. If you happen upon this text anywhere else on the internet or in print, please let us know at MilitaryFactory AT gmail DOT com so that we may take appropriate action against the offender / offending site and continue to protect this original work.
Advertisements

Status
RETIRED
Not in Service.
Crew
10

(Showcased performance specifications pertain to the Avro Shackleton MR.Mk 3 production variant. Performance specifications showcased above are subject to environmental factors as well as aircraft configuration. Estimates are made when Real Data not available. Compare this aircraft entry against any other in our database or View aircraft by powerplant type)
2 x 20mm Hispano automatic cannons in nose emplacement. 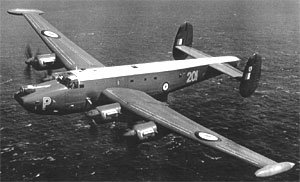