Authored By: Staff Writer | Last Edited: 04/27/2021 | Content ©www.MilitaryFactory.com | The following text is exclusive to this site. 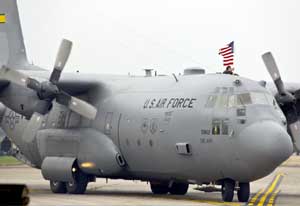 Easily one of the most successful military aircraft of the post-World War 2 age, the Lockheed C-130 "Hercules" continues in dedicated service today, some sixty years after its first flight. The versatility of this transport became such that a plethora of special mission variants emerged over the course of its steady and lengthy career. Production has reached over 2,300 units with operators ranging from Afghanistan and Algeria to Yemen and Zambia while the United States remains its largest global operator through its use by special operations forces, airlift squadrons, electronic warfare groups, transport sections and more - all falling under various service banners including that of the Air National Guard and Coast Guard.

The story of the Hercules began in a 1951 United States Air Force (USAF) requirement by which time America was already committed to a new war in Korea. The USAF requirement called for a new tactical-level transport with the ability to take-off and land on rough, unprepared runways in short order. As such, a high-winged, four-engined design was adopted from Lockheed that showcased the needed lift and control and low-altitude, low-speed flight. The design included an elevated flight deck and raised tail unit. The raised cockpit placement offered good views of the terrain ahead as well as the engine installations along each wing leading edge while the elevated tail section cleared the rear base of the aircraft for access to the hold within - the classic transport arrangement now copied by other manufactures the world over. The aircraft would serve as a direct replacement for aging, limited-scope transport types then in service and pressed to their limits over the Korean Peninsula.

The USAF commissioned for a pair of prototypes under the "YC-130" designation during July of 1951 to which then development and construction produced flyable forms, one taking to the air for the first time on August 23rd, 1954. Satisfied with the product, the USAF ordered the type into serial production, this coming from the Lockheed Marietta, Georgia facility - the legacy of the Hercules transport was officially born.

With the A-model in service just a few short years, engineers managed an improved design which yielded the C-130B introduced in 1959. By this time, the engines were uprated and now driving four-bladed propeller units with improved efficiency resulting in extended operational ranges. The undercarriage was further reinforced for the rigors of unprepared airfields. The C-130B-II became a specialized electronics reconnaissance form and these featured faux underwing fuel tanks housing antenna equipment. The C-130D (there was no "C-130C" model) became a specialized winter variant of the C-130 complete with landing skis for Arctic-type service. This variant was taken on by the USAF and the Air National Guard.

The next major form emerged as the C-130E which appeared in 1962. More powerful Allison T56-A-7A turboprop engines were introduced with this mark which improved "hot and high" operating performance. Range was again extended through implementation of larger external fuel tanks and the airframe reinforced for battlefield abuses. The new fuel tanks were relocated from outboard of the engine pairing to between each installation. The aircraft's Maximum Take-Off Weight (MTOW) was increased which broadened the tactical in-theater hauling capabilities of the design. The avionics suite was addressed for the better. The Canadian Air Force recognized this mark as the "CC-130E".

The line was once again improved with the arrival of the C-130H of 1965. These included yet more powerful Allison T56-A-15 turboprop engines and eventually saw the avionics suite modernized and the structure further reinforced for extended service lives.

The C-130J "Super Hercules" has emerged as a new, fully-modernized version of the base C-130 design (a design largely unchanged over all of these years). Introduced in 1999, it features all new avionics with cockpit, new engines and other modernized components to keep the platform viable into the foreseeable future. Over 300 have been manufactured and serve the USAF, USMC, the British Royal Air Force, the Italian Air Force and many other global operators.©MilitaryFactory.com
Advertisements

Many "special mission" Hercules have been developed over the life of this aircraft. The DC-130 became a drone control platform and built from the A-, E-, and H-models. Electronic warfare versions were known under the "EC-130" designation and encompass some named variants such as the "Commando Solo", the "Rivet Rider", and "Compass Call". The HC-130 is used to signify a Search and Rescue (SAR) version born from several Hercules models - some named as in the "Combat King" and the "Combat King II". An aerial refueling version went on to serve the USMC under the KC-130 designation (F-, R-, T-, and J-models).

Several C-130s serve with the USAF/Air Force Reserve as hurricane-watching platforms for the American weather service. The VC-130H is a modified V.I.P. passenger transport.

One of the most famous - and easily identifiable - of the C-130 variants is the AC-130 "gunship" and its battery of weaponry installed along the portside of the aircraft. The mark has gone under the various names of "Spectre", "Spooky", "Ghostrider", and "Stinger II" and some 47 have been manufactured across Hercules A-, E-, H-, U-, and W-models. Weapon load outs include 7.62mm miniguns, 20mm Gatling guns, 40mm cannons, a 105mm field howitzer, a 30mm autocannon, AGM-114 Hellfire anti-tank missiles, conventional drop bombs, and general air-to-surface guided missiles and precision bombs depending on the sub-variants involved. The effect of a salvo delivered from the side of a circling AC-130 has proven to have utterly lethal effects on the receiving enemy.

Lockheed has also delivered a civilian-minded version of its ubiquitous C-130 under the L-100 "Hercules" designation.

C-130s have seen military service since their introduction during the Vietnam War (1955-1975) where some seventy of the type were lost in combat. Israeli commandos used the aircraft when overtaking a terrorist-held airliner in 1976. Argentine forces fielded the aircraft during the 1982 Falklands War with Britain. The Hercules was back in play during the 1991 Gulf War where it was used by several of the primary participating parties of the American-led coalition. More recent events have seen the C-130 fielded in the Afghanistan and Iraqi theaters of war following the respective 2001 and 2003 American-led invasions. Several other global operators have found the type useful in weeding out fanatical Islamist strongholds over unforgiving frontiers.

Amazingly, production of C-130s remains ongoing as of 2014 and major operators beyond the United States have become its allies in Britain and Australia and elsewhere. The type has proven a reliable transport and Close-Air Support platform capable of hauling anything from ammunition and supplies to the injured and specialist troops (even paratroopers). Its versatility has seen it undertake roles that include firefighting service and humanitarian assistance. Few aircraft today can match the track record of this Lockheed product and the story of the Hercules remains an ongoing one with no sure replacement in sight.©MilitaryFactory.com
Note: The above text is EXCLUSIVE to the site www.MilitaryFactory.com. It is the product of many hours of research and work made possible with the help of contributors, veterans, insiders, and topic specialists. If you happen upon this text anywhere else on the internet or in print, please let us know at MilitaryFactory AT gmail DOT com so that we may take appropriate action against the offender / offending site and continue to protect this original work.

December 2015 - The British will retain the services of 24 C-130J models for their special forces ranks at least until 2030.

June 2017 - Lockheed Martin has introduced the C-130J-SOF special operations platform for export customers. This marks the first time the special mission version of the Hercules has been offered to foreign buyers.

August 2017 - The nation of Bahrain has committed to the purchase of two ex-Royal Air Force (United Kingdom) C-130J models adding the Gulf nation to the deep list of global operators.

June 2020 - Spain will begin to draw down operations involving its fleet of Lockheed KC/C-130H "Hercules" aircraft before the end of 2020 as it ramps up multi-mission use of the newer A400M airlifter fleet. Missions include air-to-air refueling as well as tactical- and strategic-level sorties.

October 2020 - The Netherlands is fast-tracking its C-130 Hercules replacement program, hoping to secure a successor on or around 2026.

April 2021 - Poland is to procure a further five C-130H examples from the United States. These airframes were destined for the scrapheap at the country's "boneyard".

(Showcased performance specifications pertain to the Lockheed C-130H Hercules production variant. Performance specifications showcased above are subject to environmental factors as well as aircraft configuration. Estimates are made when Real Data not available. Compare this aircraft entry against any other in our database or View aircraft by powerplant type)
Typically none with transport forms though some specialized models outfitted with a variety of weapon options. Internal payload of up to 42,637lb of supplies, personnel and some light-class vehicles. 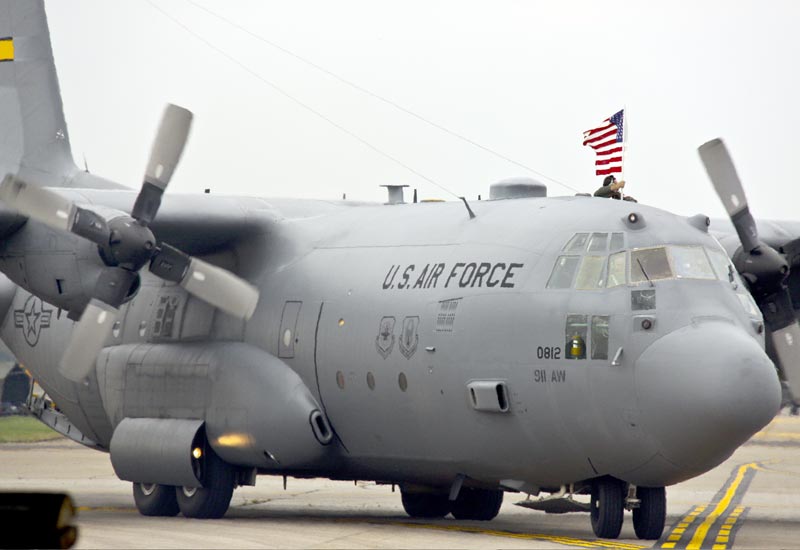 Image from the United States Department of Defense imagery database.
2 / 15 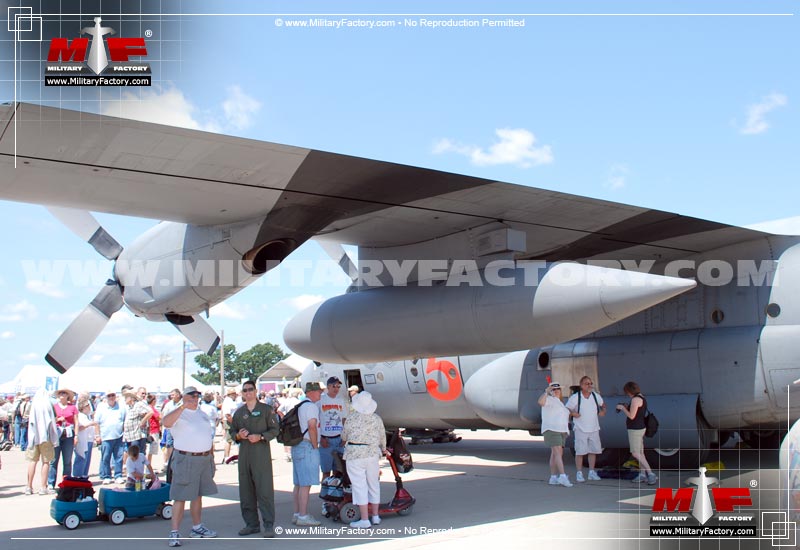 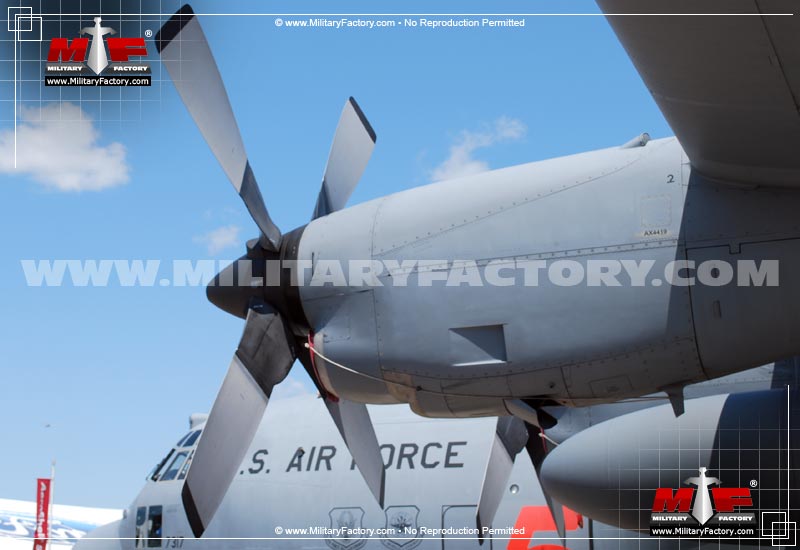 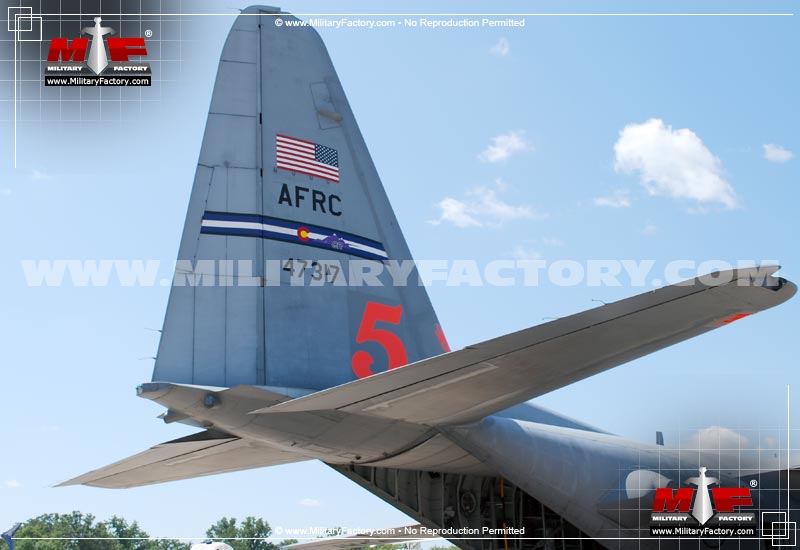 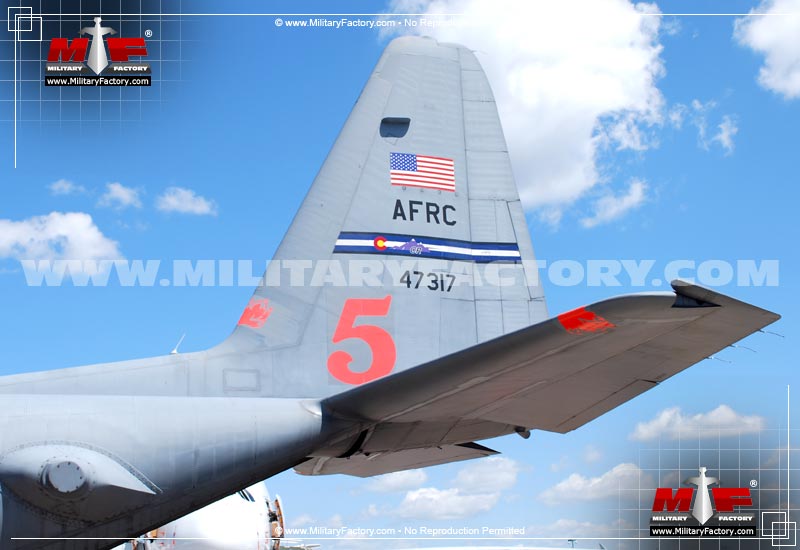 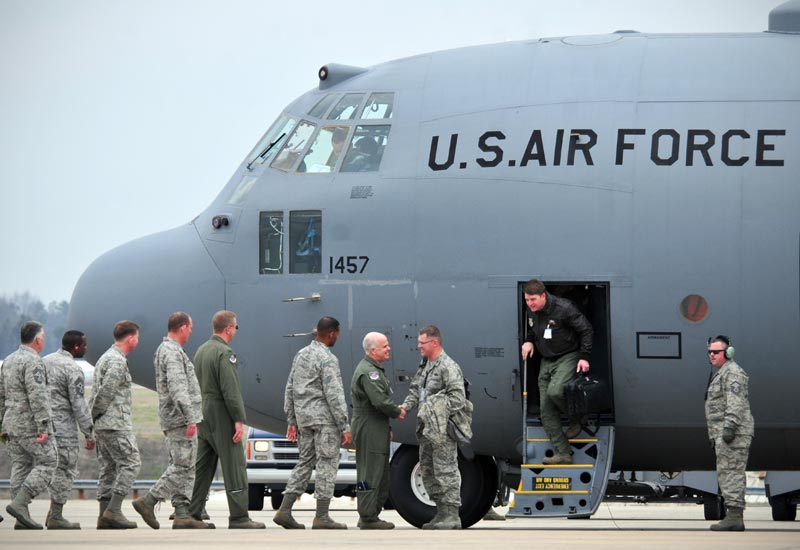 Image from the United States Department of Defense imagery database.
7 / 15 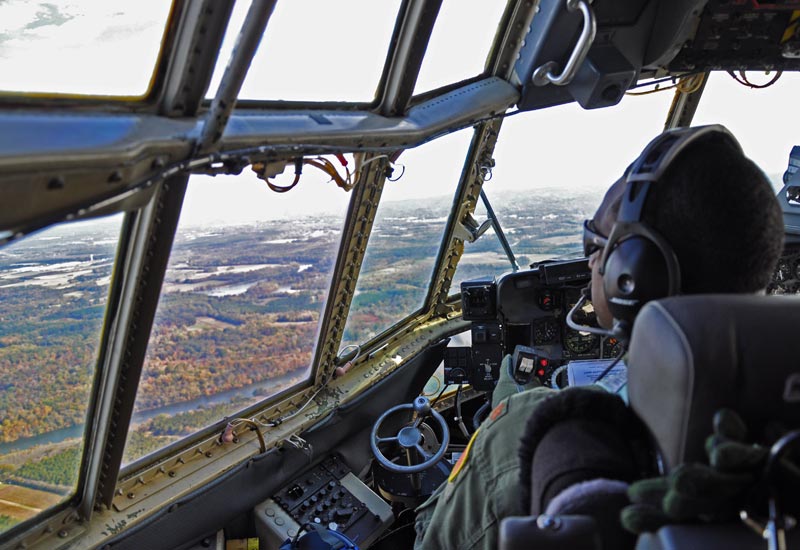 Image from the United States Department of Defense imagery database.
8 / 15 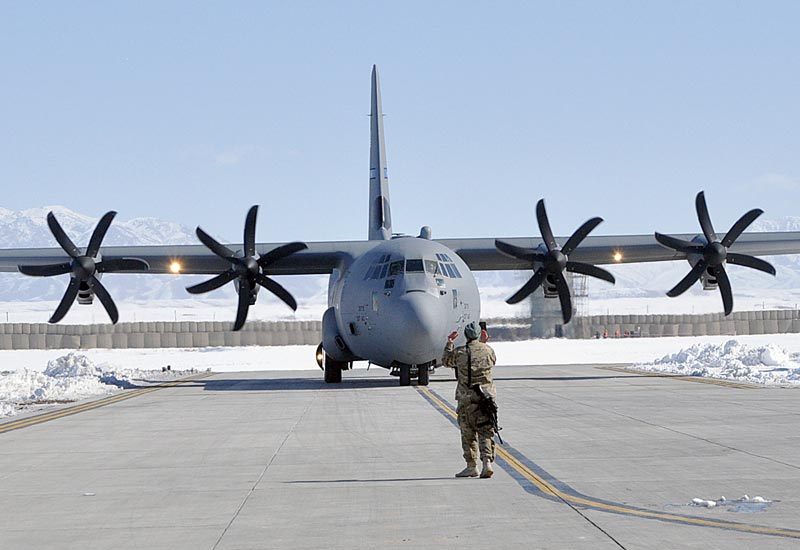 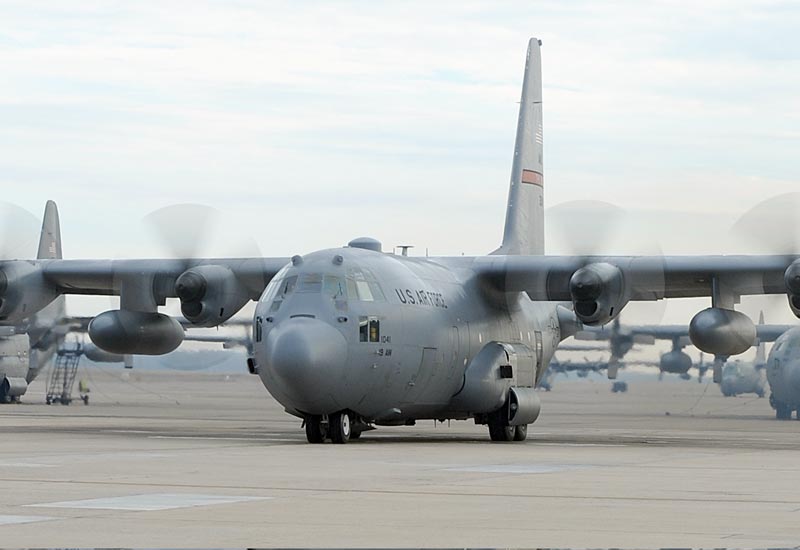 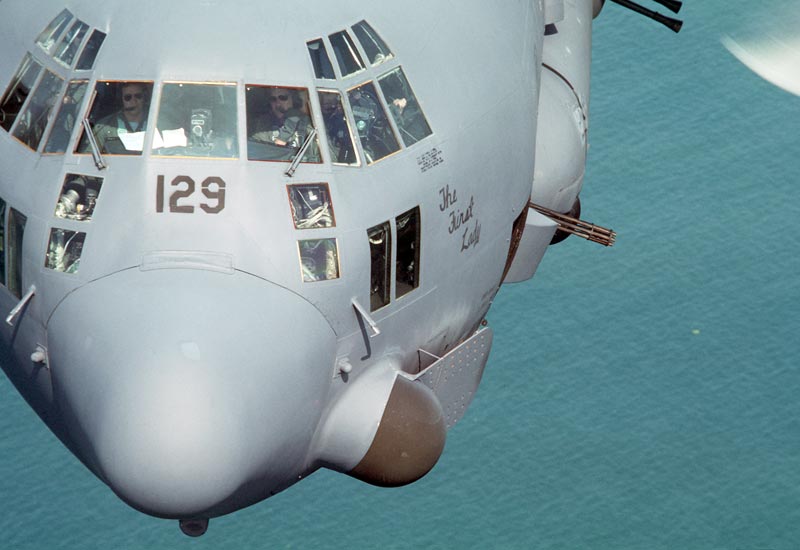 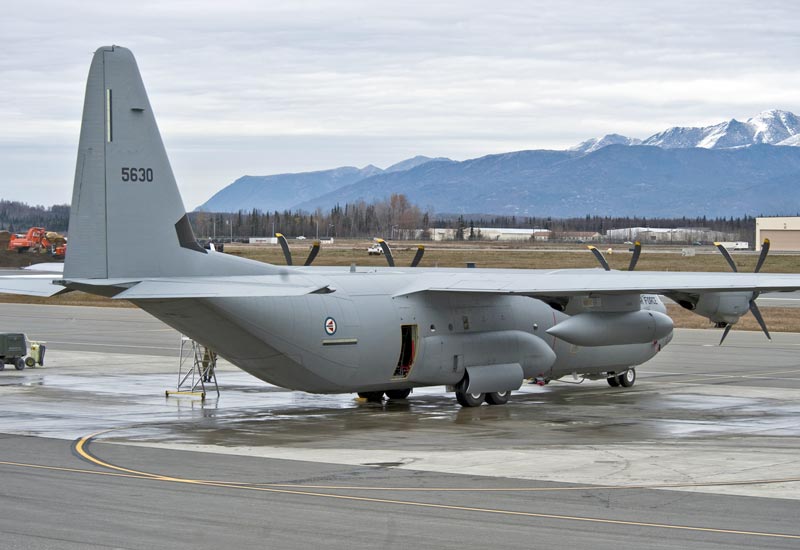 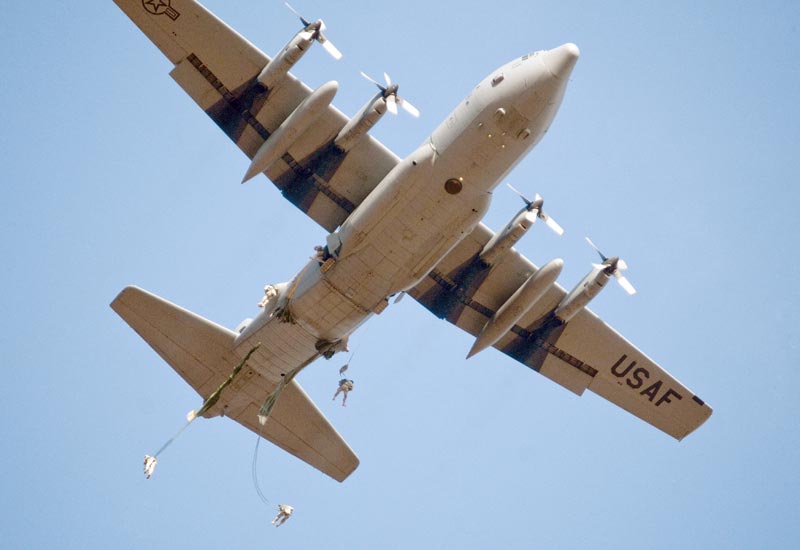 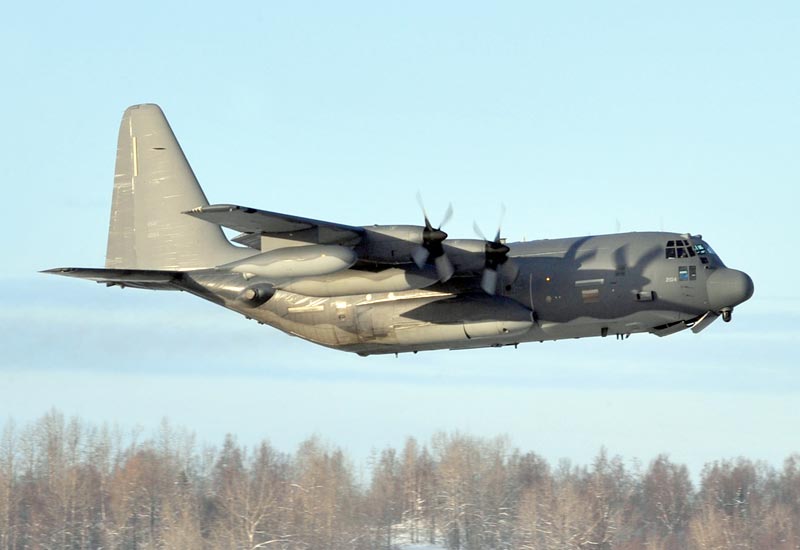 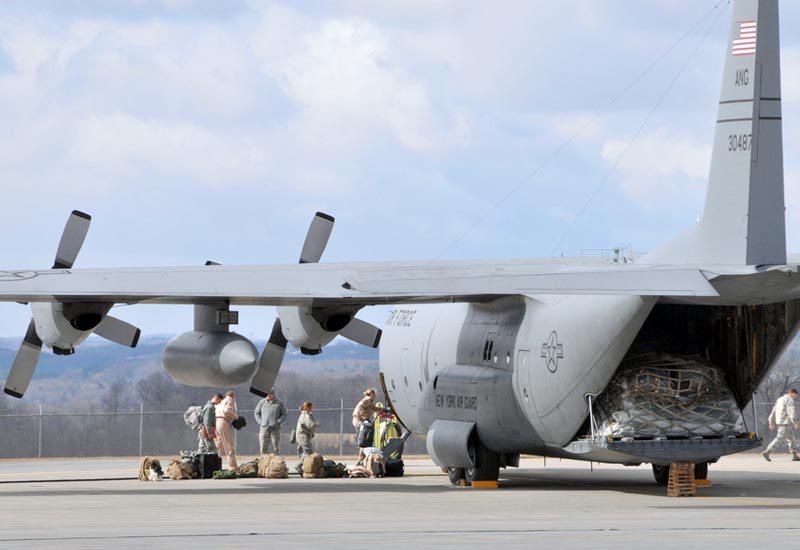 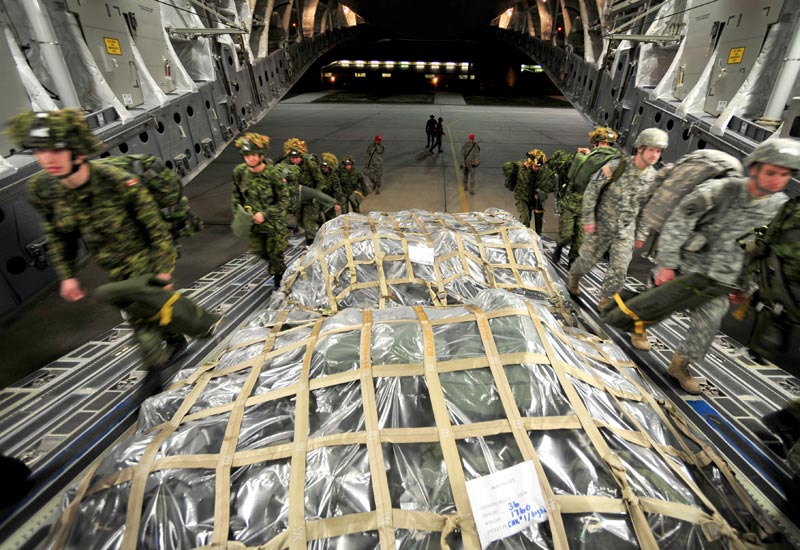 Aviation developments of similar form and function, or related to, the Lockheed C-130 Hercules...