Originally developed along the lines of a nuclear-capable attack bomber, the North American A-5 Vigilante suffered in the low-level reconnaissance role over Vietnam.

Authored By: Staff Writer | Last Edited: 01/28/2019 | Content ©www.MilitaryFactory.com | The following text is exclusive to this site. 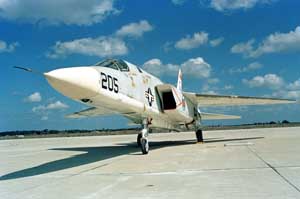 The aviation concern of North American became a household name in American military aviation thanks to its World War 2 contributions through the P-51 "Mustang" fighter and B-25 "Mitchell" medium bomber lines. The company struck gold once more in the Korean War with its F-86 "Sabre" jet fighter - the war serving to showcase the first jet-versus-jet duels in military history. Throughout the 1950s, the company moved on several notable programs including its X-15 rocket-powered research aircraft and the impressive, yet cancelled, XB-70 "Valkyrie" supersonic bomber. The XF-108 "Rapier" was a proposed interceptor design that, at one point, was considered as an escort fighter for the XB-70. Both the XB-70 and XF-108 endeavors failed in netting any serial production commitments though the XB-70 went on to see extended flying time in the research role.

The XF-108 interested the USAF for its interception capabilities which required a very fast aircraft with a high rate-of-climb to meet the threat of incoming Soviet bombers. When the program was cancelled, North American reconstituted the aircraft's fuselage, its systems, and weapons suite into a new form to interest the United States Navy as a carrier-based, supersonic, nuclear-capable strike bomber. North American began preliminary design study work on such an aircraft as early as 1953 under a private company initiative.

While the XF-108 retained many design qualities of its bigger counterpart - the XB-70 - that made it appear cutting edge by 1950s standards, the new North American strike bomber revealed smoother lines more consistent with military aircraft emerging from the 1960s. It was a large, heavy aircraft with excellent performance for its time. The double-delta wings featured in the XF-108 gave way to a more traditional forward mainplane and rear-set horizontal tailplane arrangement with swept angles for aerodynamic efficiency at high speeds. Twin intakes were used to aspirate two engines, the pairing providing the necessary power while also increasing survivability over vast ocean spaces and enemy territory. The crew numbered two and were seated in tandem - the pilot at front with the bombardier / navigator in the rear (both positions featured ejection seats). The undercarriage was of a traditional tricycle approach and each leg wholly retractable into the body of the aircraft. A single vertical tail fin (an all-moving surface) was affixed to the extreme aft end of the fuselage and set above and between engine housings. A unique internal bomb bay delivery system (detailed below) was implemented as was an early-form of Fly-by-Wire (FBW) and Head-Up Display (HUD). At the heart of the aircraft was an advanced navigation / attack computer through the AN/ASB-12 system.

North American was handed a development contract in late August of 1956 and, a little over two years later, prototype "XA3J-1" made its maiden flight on August 31st, 1958. A second prototype was later added to the stable.

As a supersonic nuclear bomber, the aircraft featured a novel internal bomb bay release system essentially made up of a tube filling the space found between the two engine installations. This bay served a single nuclear bomb. The bomb was inserted into this bay followed by two disposable fuel tanks and all three were capped by the aircraft's tail cone assembly. When the bomb was to be released, the tail cone was jettisoned and the fuel tanks cleared the aircraft followed by the nuclear payload. In this way, the aircraft was free to deliver the armament at high speed which reduced its exposure to enemy fire and interception. An internal bomb bay also decreased overall drag as opposed to externally-held ordnance. Two external hardpoints were fitted though these became reserve stations for extra fuel stores.

After the requisite flight testing and formal evaluation phases were completed, the aircraft was accepted by the USN as the A3J-1 "Vigilante". Production models would be recognized as A3J-1A and the vehicle became the first (and only) Mach 2-capable attack bomber to serve the branch. The first squadron to equip with the type was VAH-3 during June of 1961 and the aircraft was used to succeed the aging Douglas A-3 "Skywarrior" line in the carrier-based strike role. During 1962, the U.S. military adopted an all new naming scheme for its aircraft which revised the A3J-1 designation to become "A-5". As such, the early A3J-1A models became "A-5A".©MilitaryFactory.com
Advertisements

Once in service, the complex A-5 showcased issues which limited its success - such was the price for the technology in play. It was an expensive aircraft that held a rigorous maintenance schedule and its large size limited storage space on already space-strapped American carriers. In time, and with further exposure to their new aircraft, crews began to paint a more favorable opinion of their attack bombers - they proved fast and agile for their dimensions and weight and there was much love for the power inherent in two J79 afterburning turbojets.

A-5A was fielded with 2 x General Electric J79-GE-8 series engines which provided the airframe with 10,900 lbf of thrust (each) on dry and 17,000 lbf of thrust (each) with afterburner engaged. Afterburner involved raw fuel being pumped into the jet exhaust creating a short burst of speed at the expense of higher fuel consumption. The A-5A held a maximum speed of Mach 2.0 (1,320 mph) at 40,000 feet and showcased a ferry range of 1,807 miles with a combat radius of 1,290 miles. Rate-of-climb was 8,000 feet per minute.

The nuclear payload ultimately cleared for use by the A-5 included the Mk 27, B28, and B43 series of free-fall nuclear bombs. A conventional loads could also be carried on the two external hardpoints though this was a seldom used feature of the aircraft throughout its service career.

Ten Vigilante squadrons were formed during the life of the aircraft. The original A-model was followed by the revised "A3J-2" which became the "A-5B" after the 1962 restructuring. Fifty-seven A-5A aircraft were eventually produced along with twenty A-5B models. The B-models were given extended operational ranges by way of new internal fuel stores and two additional external hardpoints (four total now). The internal tanks forced a noticeable "hump" along the dorsal fuselage spine which easily identified the updated models in service. B-models also included leading edge blown flaps and reinforced undercarriage members.

Fortunes for the A-5 (and other aircraft) changed when the need for high-flying, high-speed penetration nuclear bombers was losing ground in the minds of American warplanners particularly as Soviet air defenses improved and the worldwide focus shifted to InterContinental Ballistic Missiles (ICBMs) as the primary means of nuclear weapons delivery. Land-based launchers were now joined by submarines equipped to launch ICBMs from underwater locations from anywhere in the world leading many to believe that such aircraft as the A-5 held little value moving forward. This shift led to the A-5's reduced purchase total of just 156 aircraft. The initial production batch appeared from 1956 to 1963.

With its reduced mission role, the A-5 was reconsidered as a fast reconnaissance platform which begat the "RA-5C" designation ("A3J-3P" before 1962). The revised aircraft emerged through 91 new-build airframes, 43 converted A-5A models and 6 converted A-5B models. RA-5C aircraft differed some from their attack bomber origins in that the featured increase wing areas and a "multi-sensor" reconnaissance pack fitted under the fuselage. The installation gave the aircraft a Side-Looking Airborne Radar (SLAR) capability as well as increased countermeasures support, ELectronic Intelligence (ELINT) support, InfraRed (IR), and various camera systems. Heavier than its original production forms, the RA-5C lost some of its performance value but retained its ordnance-carrying capabilities as well as its two crew.

Eight of the ten established A-5 squadrons were pressed into combat service during the Vietnam War (1955-1975) where they began their service tenure in August of 1964 in the reconnaissance role. Speed and agility were key assets to the aircraft though the low-to-medium altitude operation environments made the A-5 susceptible to ground-based threats and interception. Eighteen RA-5Cs fell to enemy action during the war with a further nine lost to accidents. These heavy losses forced A-5 production lines to reopen and 36 more aircraft were added to existing stocks from the span of 1968 to 1970. While its wartime service record is considered rather poor, the aircraft was heavily relied upon by war planners in a fighting environment it was never intended for.

With the end of the war, the A-5 series became one of the victims of the post-war drawdown and flew its last flight during November of 1979 - bringing an end to its service tenure. Its lack-luster combat record and expensive maintenance schedule did little to extend the career of this once-proud design. Its service as an attack aircraft was overshadowed by its time aloft as a reconnaissance platform and both of these roles were quickly taken over by more modern, compact, and lower-cost options - officially ending the reign of the A-5 Vigilante.

The A-5 aircraft was briefly considered for the USAF's proposed Improved Manned Interceptor (IMI) program as the NR-349. This version was to fit three General Electric J79 engines and hold 6 x AIM-54 "Phoenix" long-range air-to-air missiles as its primary armament. The initiative ultimately fell to naught.©MilitaryFactory.com
Note: The above text is EXCLUSIVE to the site www.MilitaryFactory.com. It is the product of many hours of research and work made possible with the help of contributors, veterans, insiders, and topic specialists. If you happen upon this text anywhere else on the internet or in print, please let us know at MilitaryFactory AT gmail DOT com so that we may take appropriate action against the offender / offending site and continue to protect this original work.
Advertisements

(Showcased performance specifications pertain to the North American A-5A Vigilante production variant. Performance specifications showcased above are subject to environmental factors as well as aircraft configuration. Estimates are made when Real Data not available. Compare this aircraft entry against any other in our database or View aircraft by powerplant type)
TYPICAL:
1 x Mark 27, B28, OR B43 nuclear bomb carried in an internal bomb bay.
2 x B43, Mark 83, OR Mark 84 conventional drop bombs on external hardpoints.

(Not all ordnance types may be represented in the showcase above)
Hardpoint Mountings: 2 (later 4) 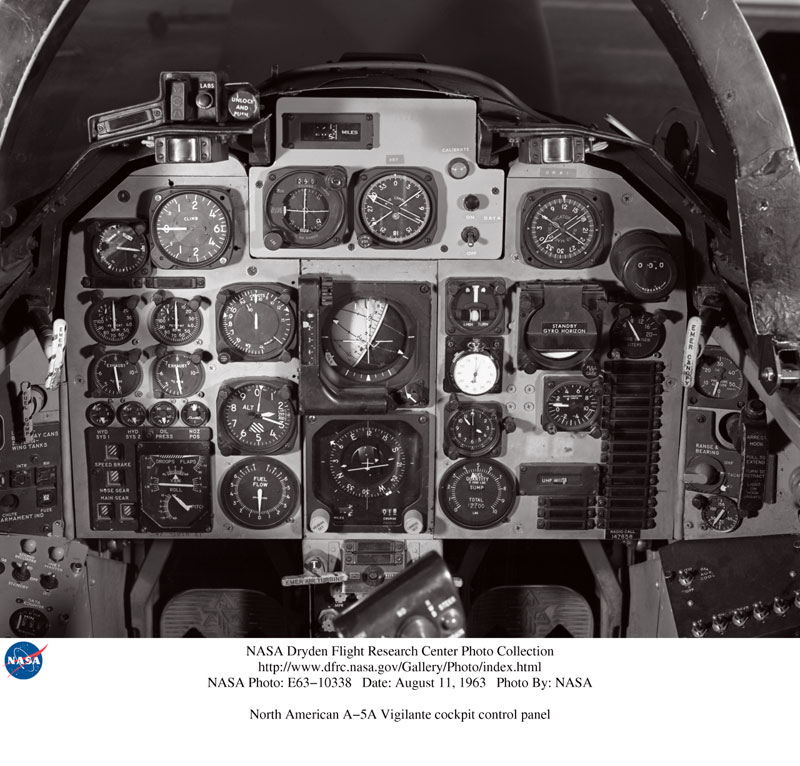 General Assessment
Firepower
Performance
Survivability
Versatility
Impact
Values are derrived from a variety of categories related to the design, overall function, and historical influence of this aircraft in aviation history.
Overall Rating
The overall rating takes into account over 60 individual factors related to this aircraft entry.
76
Rating is out of a possible 100 points.
Relative Maximum Speed
Hi: 1400mph
Lo: 700mph
This entry's maximum listed speed (1,319mph). 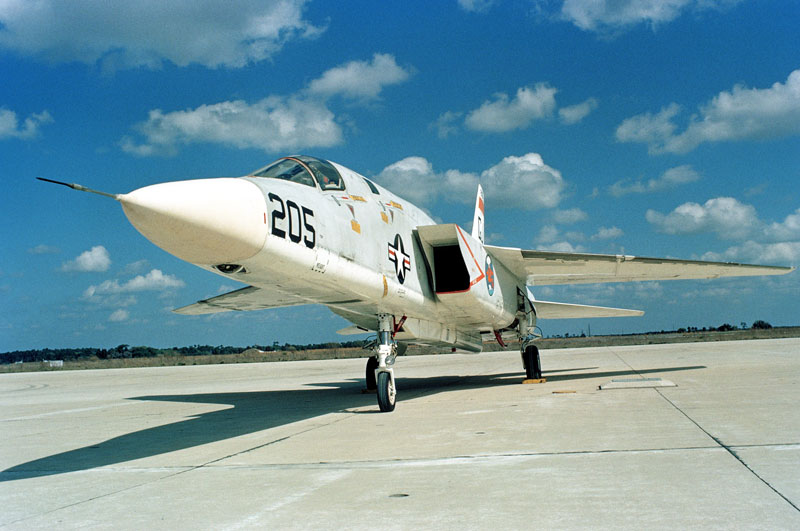 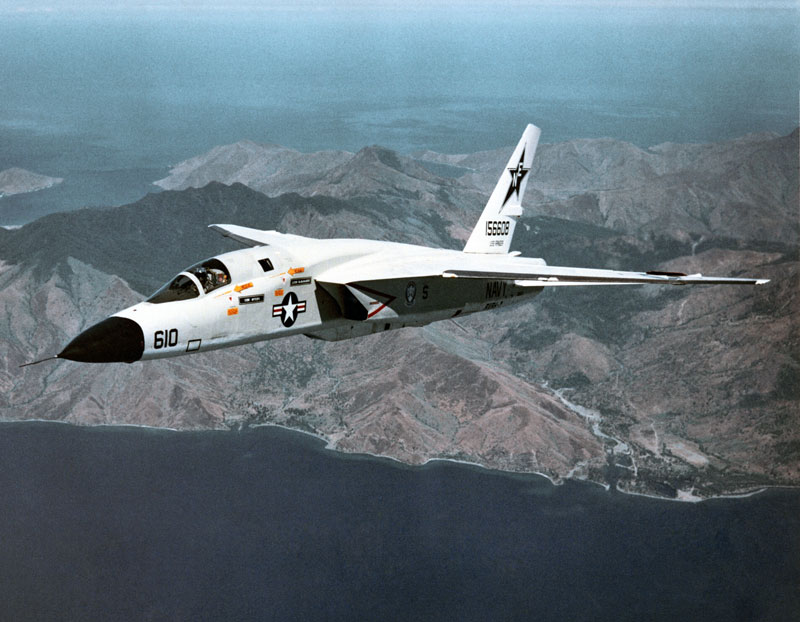 Front left side view of a North American RA-5C Vigilante in flight; color
3 / 15 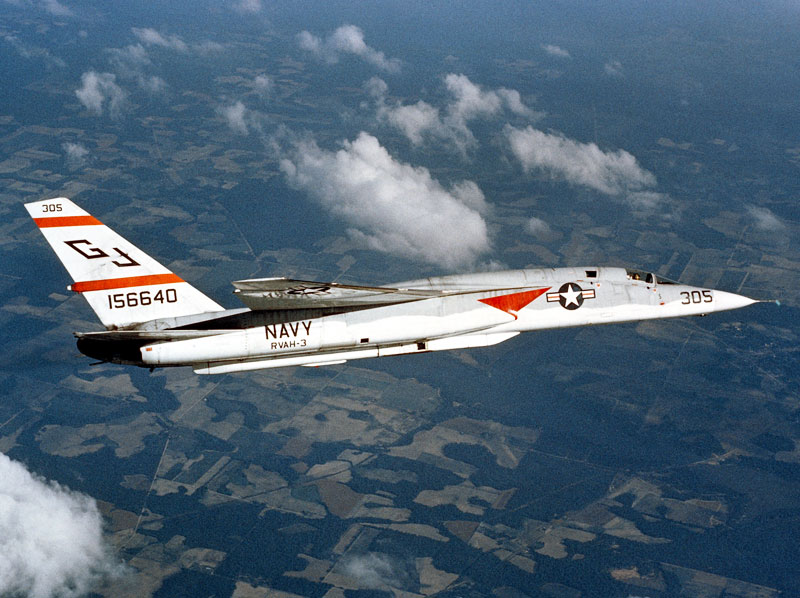 Right side view of a banking North American RA-5C Vigilante in flight; color
4 / 15 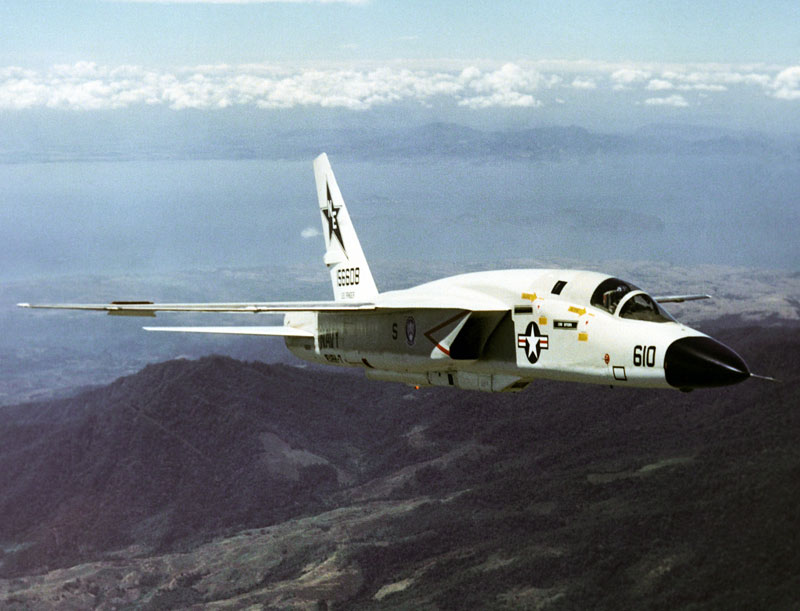 Front right side view of a North American RA-5C Vigilante in flight; color
5 / 15 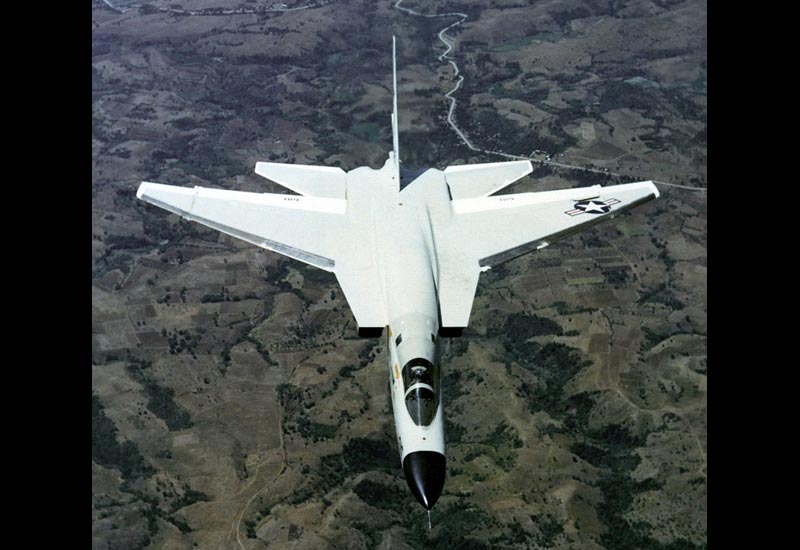 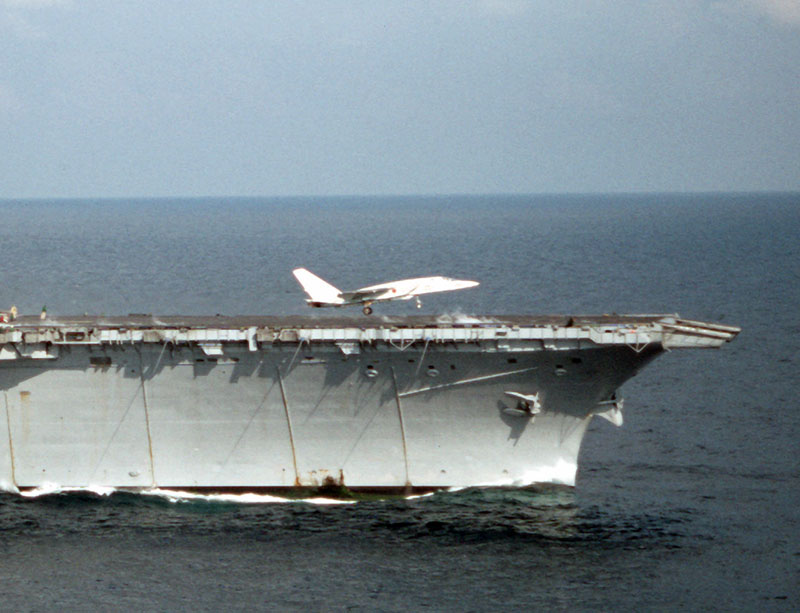 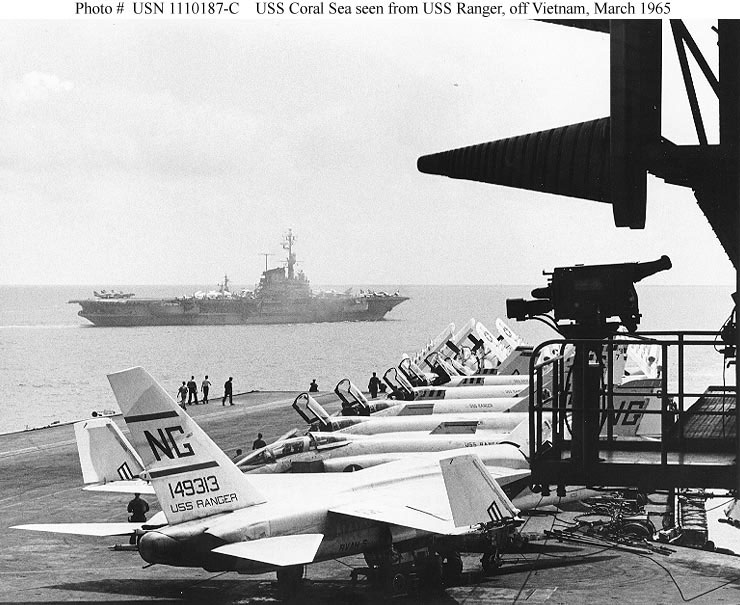 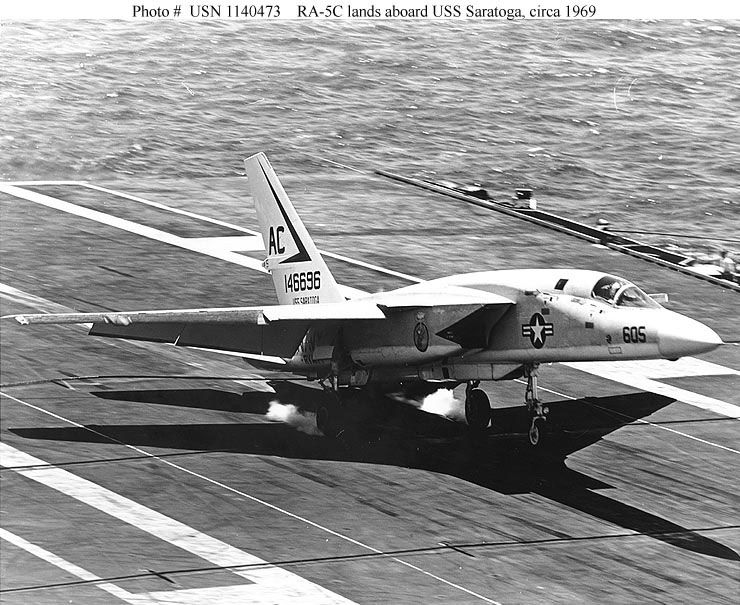 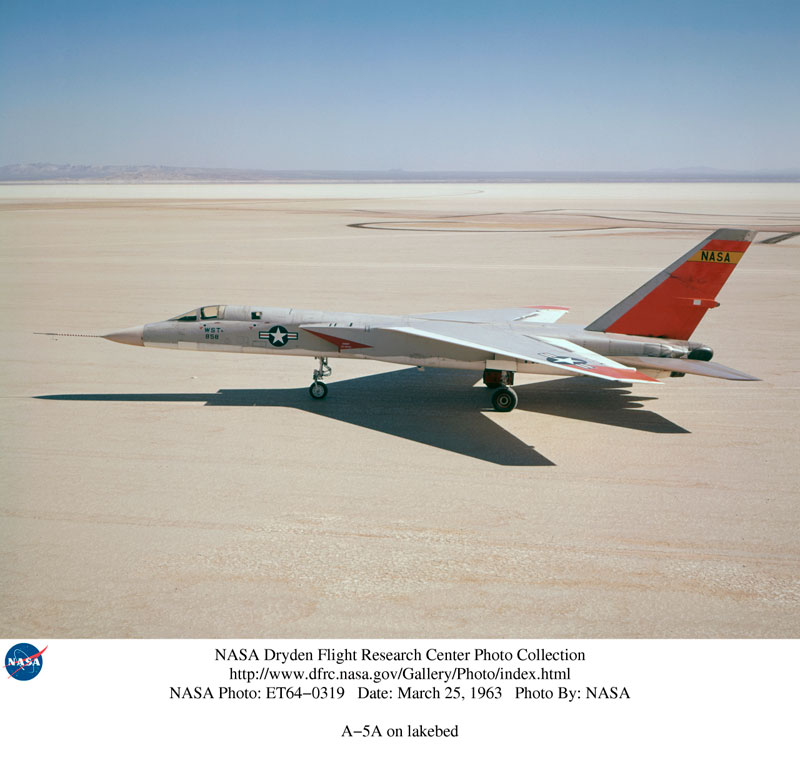 High left side view of the North American A-5A Vigilante at rest; color
10 / 15 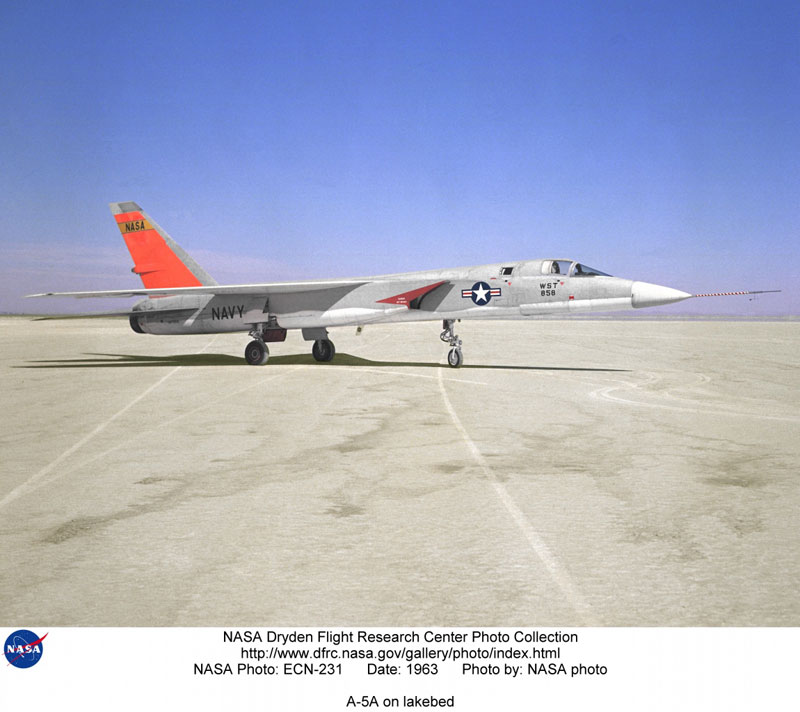 Front right side view of a North American A-5A Vigilante at rest; color
11 / 15

The twin cockpits of this North American A-5 Vigilante are shown to good effect in this picture; color
12 / 15 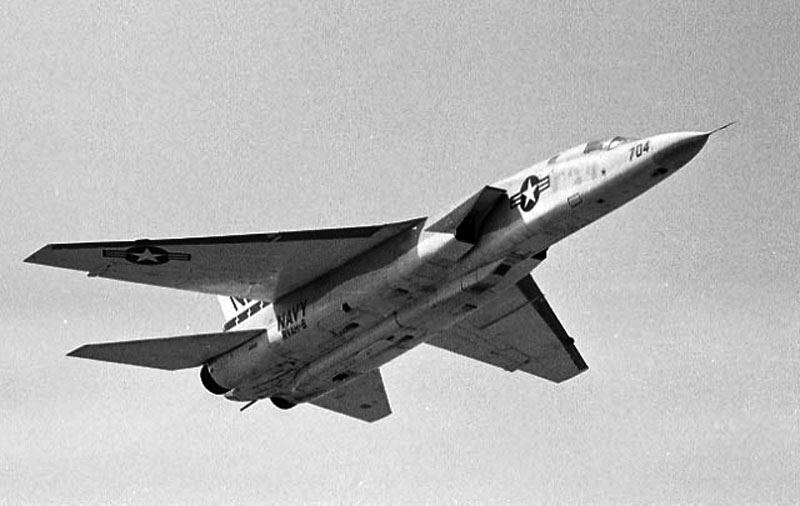 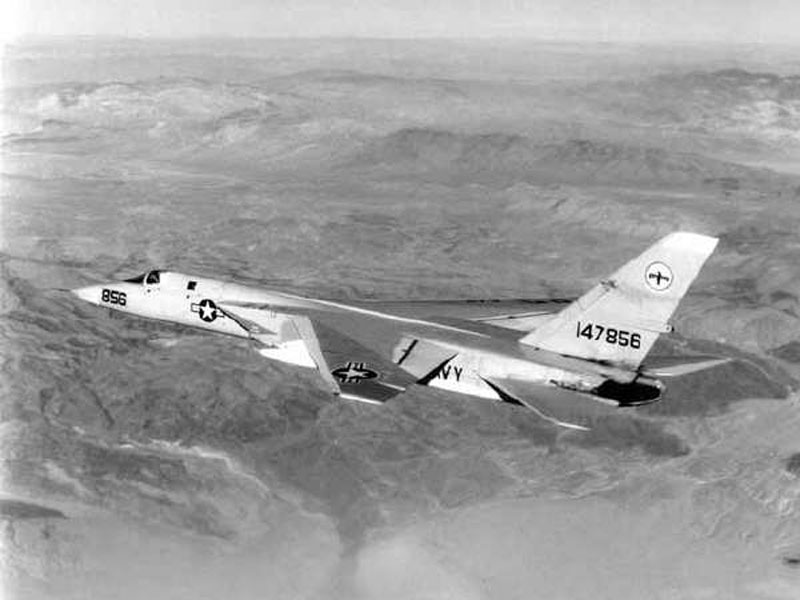 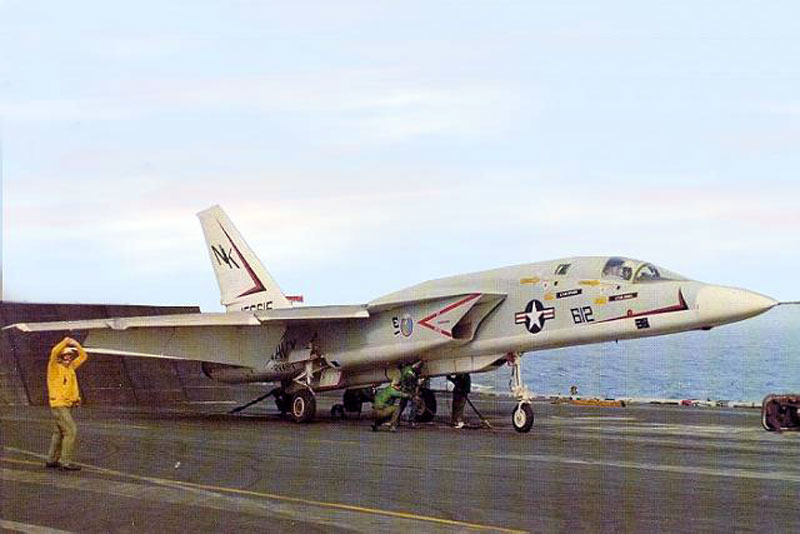 A North American A-5 Vigilante is readied aboard a US Navy carrier; color
15 / 15 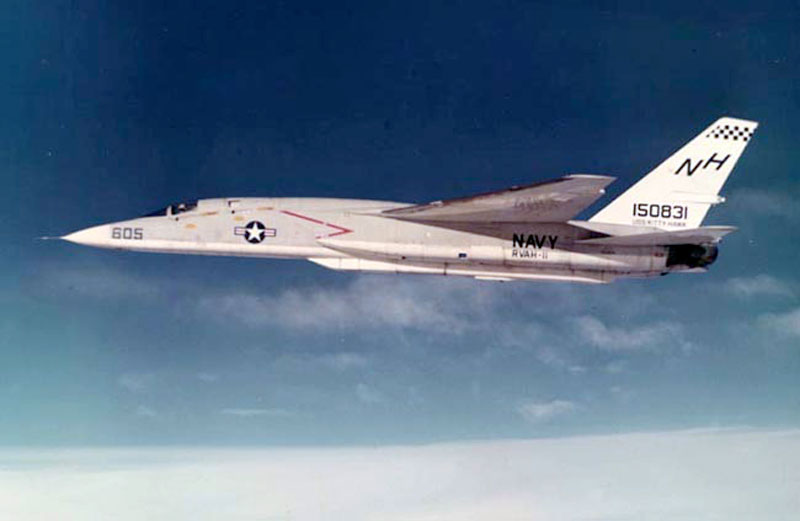