The Hawker P.1054 was designed in response to a Royal Air Force need for a capable day fighter and interceptor.

Authored By: Staff Writer | Last Edited: 11/02/2022 | Content ©www.MilitaryFactory.com | The following text is exclusive to this site. 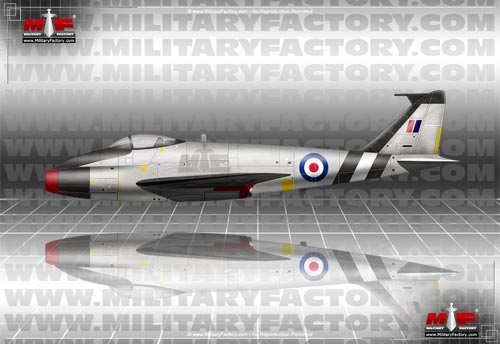 The end of World War II (1939-1945) brought about a technical revolution in the field of military jet-powered flight. In regards to fighters, the field was advanced by more relatively efficient powerplant solutions, streamlined fuselage design, and swept-wing research for high-speed manned flight. The result was a boon for aircraft designers of the period heading into the early Cold War years as the West stood face-to-face with its new enemy emerging in the East - the nuclear-armed Soviet Union.

For the British Royal Air Force (RAF) - who proved themselves pioneers in jet-powered flight prior to, and during, World War II - there were a bevy of developments put forth to follow the success that was the country's first operational-level jet-powered combat aircraft, the Gloster Meteor (detailed elsewhere on the Military Factory). This same platform was reworked for the night-fighter role which covered Britain on both needed aerial fronts.

However, these platforms certainly held limitations in their general design as their origins lay in 1940s thinking. Couple to this was the general inefficiency of early turbojet engines regarding fuel burn and performance output which meant a single design had to enclose multiple fuel tanks or carry its own resupply on external hardpoints, altering what should have been an aerodynamically efficient airframe. There also proved a fine balancing act of qualities to make for a sound fighter solution - namely armament, power, performance, and operating weight.

In the search for a new, modern Day Fighter, British engineers began work on several design studies intended to fulfill a growing RAF requirement under "F.43/16" - also Operational Requirement 228 (OR.228). This called for a general interceptor outfitted with a massive 4.5" recoilless autocannon as its primary armament and equipped with the Rolls-Royce AJ.65 or Metrovick F.9 axial-flow turbojet engine. The Gloster P.234, P.248, and P.250 joined submissions from Hawker (P.1054), and Supermarine (Type 508).

The requirement was eventually fulfilled by the P.1054 route under Hawker which evolved to produce the classic Hawker "Hunter" - the design formally adopted in 1954 and built in 1,972 total examples.

The original P.1054 offering that emerged in September of 1946 held very little resemblance to the eventual winning Hunter design: wing mainplanes were swept-back and of generally elegant design flow while being set ahead of midships. The cockpit was set back from the nosecone assembly in the usual way and the tail unit would incorporate a traditional single-finned arrangement with low-set horizontal planes. A retractable, all-wheel undercarriage would provide the structural support for ground-running actions.

The key quality of this proposal was its placement of the twin turbojet engines in housings located to either side of the cockpit section and lower than the cockpit floor line. A bifurcated intake was set under the nose and, in between these openings, was be the muzzle of the 4.5" automatic cannon. The engine housings would terminate near midships by the mainplane trailing edge roots.

This unorthodox design was seemingly doomed from the start for its general inherent complexity: the location of the armament between the engine pair would make it difficult for ground crew to resupply, repair, or exchange the weapon while the engine housings themselves negated any future consideration for larger turbojet installations. Add to this the estimated cost of the weapon's overall weight, said to tip the scales in the 2,000lb range, and the P.1054 would exist as nothing more than a "paper airplane" design of the period.

While not furthered itself, the P.1054 was evolved into the short-lived "straight-wing" P.1061 which included rudimentary provision for an Airborne Interception (AI) radar but more or less retained the configuration of the P.1054. Neither design was accepted but all of this work eventually led to the P.1067 flyable prototype which - in turn - produced the finalized Hunter design.

As drawn up, the P.1054 had a wingspan of 37.5 feet and an estimated gross weight near 14,200lb. The engine pairing would have provided around 13,000lb of thrust combined and theoretically driven the fighter to speeds in excess of 615 miles-per-hour. Naturally, fuel burn would have to be addressed from running the two engines at high levels which would limit patrol and interception ranges. The reliance on an all-gun armament also meant that Line-of-Sight (LoS) to the target (most likely a Soviet bomber) was a requirement.©MilitaryFactory.com
Note: The above text is EXCLUSIVE to the site www.MilitaryFactory.com. It is the product of many hours of research and work made possible with the help of contributors, veterans, insiders, and topic specialists. If you happen upon this text anywhere else on the internet or in print, please let us know at MilitaryFactory AT gmail DOT com so that we may take appropriate action against the offender / offending site and continue to protect this original work.
Advertisements

(Showcased performance specifications pertain to the Hawker P.1054 production variant. Performance specifications showcased above are subject to environmental factors as well as aircraft configuration. Estimates are made when Real Data not available. Compare this aircraft entry against any other in our database or View aircraft by powerplant type)
PROPOSED:
1 x 4.5" automatic cannon embedded under the nose. 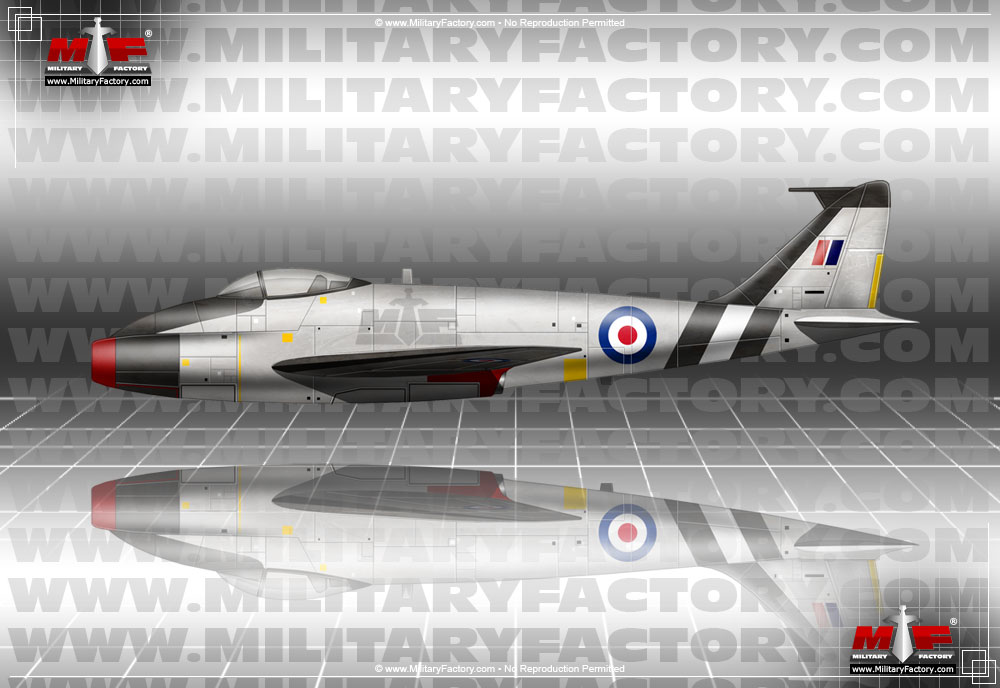