The Foton-601 ISR Unmanned Aircraft System was unveiled in Russia at Army-2022 as an all-modern ISR drone solution.

Authored By: Staff Writer | Last Edited: 08/19/2022 | Content ©www.MilitaryFactory.com | The following text is exclusive to this site. 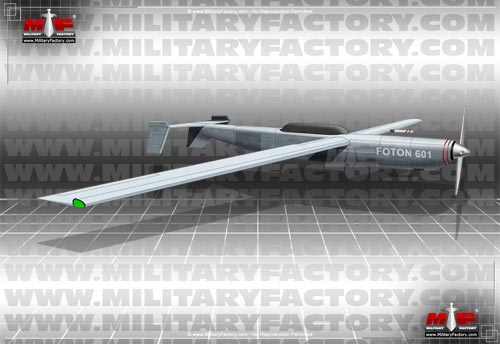 During the Russian Ministry of Defense's "Army-2022" expo of August 2022, state corporation Progress Rocket and Space Center (RKC) unveil a new all-weather, fixed-wing drone design - the "Foton-601". The 127lb system is being developed for the Intelligence-Surveillance-Reconnaissance (ISR) and its broad, tactical-level mission roles are centered on video monitoring, data collection, artillery spotting / correction, and laser designation of ground targets for networked allied units.

Outwardly, the drone is of largely conventional configuration. The fuselage is slab-sided and houses all pertinent operating systems, including engine and fuel, as well as avionics and the optics set. The straight mainplanes are seated at the shoulder and the tail unit incorporates a single horizontal plane with three (two outboard, one centerline) ventral vertical surfaces. At the nose is featured a simple two-bladed propeller unit for propulsion.

Released details include an endurance window of up to 24 hours, reaching out to ranges of 620 miles, utilizing a conventional engine feeding from its onboard 12-liter fuel tank. The powerplant and general design arrangement allow the air vehicle to exceed speeds of 95 miles-per-hour and cruise at 75 mph. Dimensions of the drone include a 16-foot wingspan.

It is not yet known when the Foton-601 will be adopted into Russian military service (if ever) but the country's invasion of neighboring Ukraine has revealed a noticeable shortcoming of the Army when it comes to drone applications on the modern digital-centric battlefield.
Advertisements

(Showcased performance specifications pertain to the base RKC Foton-601 production variant. Compare this aircraft entry against any other in our database or View aircraft by powerplant type)
None. Mission payload reserved for the ISR role. 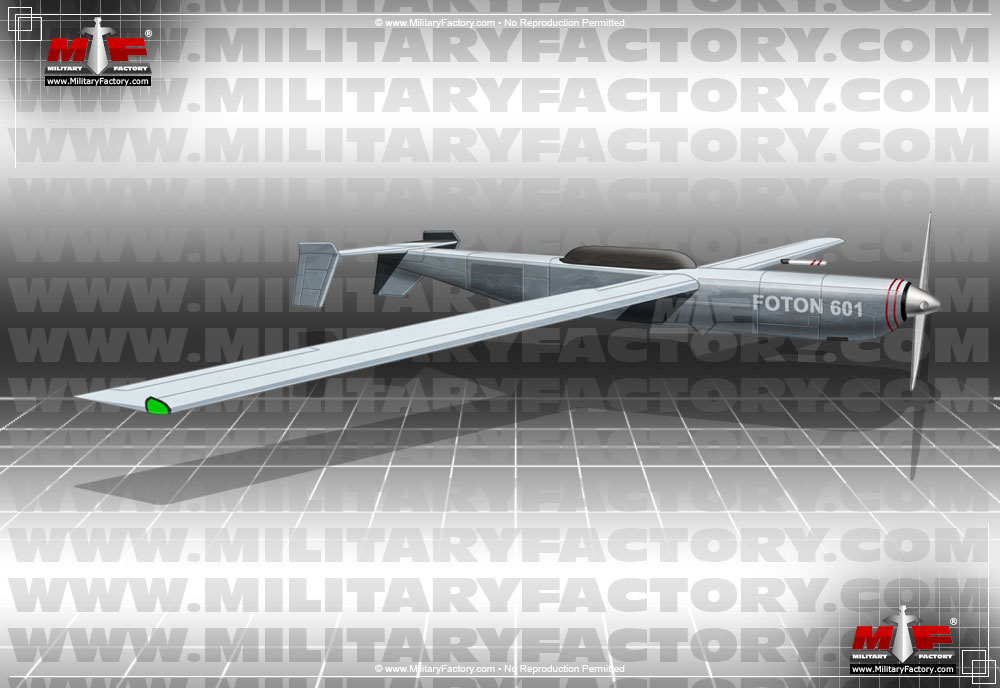