The HESA Shahed-136 loitering munition from Iran is developed around the concept of a swarming drone with multiple instances being launched during an attack.

Authored By: Staff Writer | Last Edited: 09/13/2022 | Content ©www.MilitaryFactory.com | The following text is exclusive to this site. 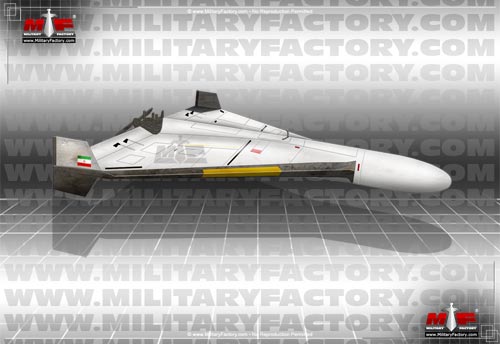 Shahed-136 is a modern "swarming" drone developed by Iranian industry. At its core, it is a loitering munition designed to neutralized ground targets at range. With multiple instances being launched from an awaiting launcher rack (in stacks of five on down), the aircraft is intended to bypass aerial defenses and overwhelm ground targets, the systems being consumed in the attack run. The drone was revealed through released footage during December of 2021.

To date (2022), the system is believed to have been actively deployed to Houthi-controlled areas of Yemen at some point.

The aircraft is given a broad-area, delta-wing planform with stabilizing rudders at the tips. The fuselage is centralized and blended into the wing members to produce an elegant shape. The nose section contains the warhead as well as the needed optics for a precision attack. The engine is seated at the rear of the fuselage and drives a two-bladed propeller in "pusher" arrangement.

The aircraft are launched near-horizontally with a slight upward angle and aided into the first phase of their flight by way of Rocket-Assisted Take-Off (RATO). The rocket is jettisoned immediately after launch at which point the drone's own conventional engine unit takes over. The overall inherent portability of the launcher rack and drone collection allows the complete unit to be fitted over the rear of most any military or commercial market truck - allowing for mobile "hit-and-run" operations which can frustrate counter actions.

If any amount of accuracy and range are present in this new Iranian design, the Shahed-136 stands as something of an evolutionary addition for the sanctions-hit country that can now rely more heavily on its own military-industrial capacity to provide modern, over-battlefield solutions.©MilitaryFactory.com
Note: The above text is EXCLUSIVE to the site www.MilitaryFactory.com. It is the product of many hours of research and work made possible with the help of contributors, veterans, insiders, and topic specialists. If you happen upon this text anywhere else on the internet or in print, please let us know at MilitaryFactory AT gmail DOT com so that we may take appropriate action against the offender / offending site and continue to protect this original work.

September 2022 - Photographic evidence of the remains of a Russian-operated Iranian HESA Shahed-136 loitering munition have emerged in the Russo-Ukrainian War. The specimen was mostly destroyed.

monoplane / mid-mounted / delta
Monoplane
Design utilizes a single primary wing mainplane; this represent the most popular mainplane arrangement. Mid-Mounted
Mainplanes are mounted along the midway point of the sides of the fuselage. Delta
The planform takes on the general shape of a triangle in which the leading edges are swept back for high-speed efficiency while the trailing edge is straight.
(Structural descriptors pertain to the base HESA Shahed-136 production variant)
Installed: 1 x Conventional engine driving two-bladed propeller unit at rear of fuselage in pusher arrangement; RATO-assisted take-off.
Range
1,243 mi
(2,000 km | 3,704 nm)
(Showcased performance specifications pertain to the base HESA Shahed-136 production variant. Performance specifications showcased above are subject to environmental factors as well as aircraft configuration. Estimates are made when Real Data not available. Compare this aircraft entry against any other in our database or View aircraft by powerplant type)
1 x Explosive (impact-detonated) warhead of unknown mass / composition. 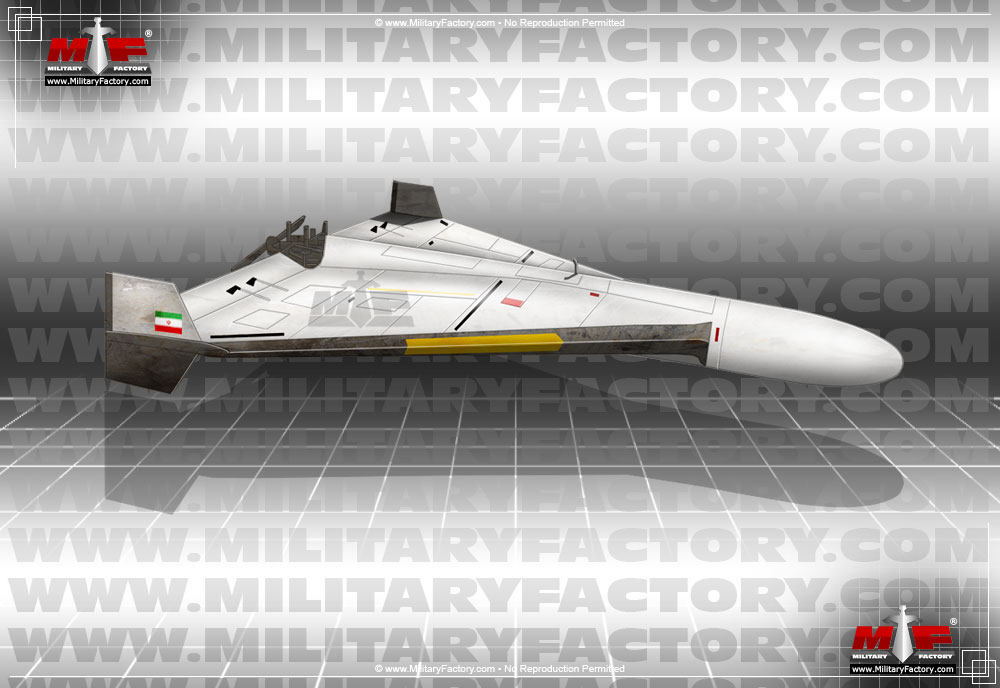