The Saab J29 became the second locally designed, developed and produced jet aircraft by Sweden in the post-World War 2 period.

Authored By: Staff Writer | Last Edited: 10/16/2018 | Content ©www.MilitaryFactory.com | The following text is exclusive to this site. 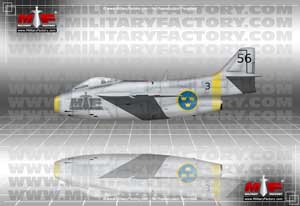 The Saab J 29 Tunnan (meaning "barrel" due to its stubby-like barrel appearance) originating from Swedish aero-industry during the Cold War period (1947-1991) was the second jet-fighter design produced the country following the close of World War 2 (1939-1945). The war set the stage for jet-powered flight and the Swedes joined the air services of the world in heavily investing in the newer, more viable propulsion schemes becoming available. Following other powers of the period, Swedish engineers relied heavily on captured German data concerning jet-powered flight and high-speed, swept-wing research. This information was incorporated it into the latest available designs for Saab which, in turn, produced the portly J29. The series went on to become the mainstay of the Swedish Air Force for its time in the air, its tenure coming to a close in 1976. Austrian was its only foreign operator.

At its core, the compact Tunnan was a single-seat, single-engine aircraft. It largely followed design approaches of the time concerning jets in that the nose section was cut down to serve as the intake for the air-breathing engine buried within the lower aft section of the fuselage. From under the tail unit was the jetpipe and the whole system sat cleanly under the pilot's feet, running along a straight line from nose-to-empennage. This arrangement forced the deep fuselage with the pilot sitting atop it overlooking the nose. The canopy was only lightly framed and of a two-piece design. The empennage was short and capped by a small-area rudder and mid-mounted horizontal tailplanes. The wing mainplanes were mid-mounted along the fuselage sides with strakes noted along their chord lines. These members were swept back for the high-speed flight expected of this speedy little interceptor/fighter. A retractable tricycle undercarriage would be used for ground-running.

The Swedes went to work in the post-war world as soon as late-1945 to which Project JxR was established. Requirements were penciled out in October of that year and two competing airframes were drawn up in response - R101 and R1001. The latter, to become the Tunnan, was selected for further development.

Initial testing (including extensive wind tunnel work) of the new aircraft's swept wing functionality occurred on a Saab 91 "Safir" (a prop-powered trainer platform) airframe with initial prototypes receiving the green-light from these results. Engineers originally selected the British de Havilland "Goblin" turbojet engine but this powerplant was superseded by the newer de Havilland "Ghost" series before the end of 1945. In 1946, the Swedish Air Force approved of the progress on their new fighter and furthered the program to completion to expedite the arrival of three planned flyable prototypes. In service, these would be flown under the "J29" designation.

A delayed first-flight, originally scheduled for August of 1948, was finally had on September 1st, 1948 to allow for time to remedy some issues encountered during static tests. In time, four total prototypes were used in the flight testing phase with armament added only in the final two specimens - this becoming 4 x 20mm automatic cannons under the nose. After a period of successful testing and slight revisions to the design, the J29 finally emerged from the prototype stages to serial production in 1948. In May of 1951, deliveries of operational-quality aircraft were being made to the Swedish Air Force beginning with the J29A.

The J29A models were the initial production forms that numbered 224 and were built from the period spanning 1951 until 1954. Earlier models had their dive brakes at the wings while later forms arrived with these fitted under the fuselage. The J29B marked 332 aircraft built from 1953 until 1955. These were given considerably larger internal fuel tanks to help increase the operational ranges of the fuel-thirsty fighters. In addition to this, underwing hardpoints were installed so the aircraft could no carry drop bombs, aerial rockets, or more fuel by way of jettisonable fuel tanks. Swedish attack squadrons knew these aircraft as "A29".
Advertisements

The S29C were 76 aircraft built from 1954 until 1956 and modified for the fast-reconnaissance role. They carried five cameras in a redesigned nose section and lacked the cannon armament. New wings (with a leading edge "dog tooth" appearance) eventually led to their redesignation of J29E. The wings were useful in increasing the aircraft's critical Mach number, that is the lowest Mach number at which airflow over the aircraft surfaces reaches the speed of sound without exceeding it. Twenty-nine were produced in 1955 as reconnaissance platforms.

The J29D was a one-off prototype set aside to test the D.H. Ghost RM.2A turbojet engine of 6,175lb. This model was then finalized as the J29F production form and 308 were converted from existing J29B and J29E aircraft to the standard. The work spanned from 1954 until 1956. In 1963, the fleet was then upgraded to support the American AIM-9 Sidewinder short-ranged air-to-air missile to further bolster the firepower of the little aircraft. The missiles were furthermore produced locally, under-license as the Rb 24.

The J29 was fielded by no fewer than thirteen Swedish Air Force squadrons for its time in the air - F.3, F.4, F.6, F.7, F.8, F.9, F.10, F.11, F.12, F.13, F.15, F.16, and F.21. The series was used in anger through F.22 "Congo" as part of the United Nations (UN) ONUC ("Organisation des Nations Unies au Congo") force in post-independence Congo, Africa as part of a peace-keeping endeavor running from 1960 until 1964. The action marked the first, and last, exposure to combat for the J29. It was also the UN's first considerable military operation. In the theater, the J29 was used effectively to strike at enemy ground targets through cannon fire and rockets with no losses recorded. After the commitment, these few aircraft were scrapped where they lay rather than pay to have them relocated back to Sweden.

Austrian Air Force use was made possible by an Austro-Swedish agreement signed in early-1961. Some 15 J29Fs were contracted for in this initial handshake between the two countries and a further 15 (again J29F models) were ordered in 1962. The subsequent batch was slightly modified by way of a nose camera fitting taking the place of two of the automatic cannons. Unlike Swedish J29s, the Austrian Tunnans did not carry the Sidewinder missile family at any point. The service retired the fleet in 1972.

Despite its rather modest production total of 661 aircraft - and some early issues with crashes owing largely to ill-trained pilots when handling swept-back wing aircraft - the J29 was a success for both Saab and Sweden in the early Cold War period and proved influential in future fighter designs that followed. The agile and fast little warplane managed a steady existence from 1951 until retired in full in 1976 and could be compared favorably to contemporaries of the time. Production spanned from 1948 until 1956. Before their end in Swedish Air Force service, J29s operated in the target towing role and were used as countermeasures training platforms. Its last recorded flight was in August of 1976.
Advertisements

General Assessment
Firepower
Performance
Survivability
Versatility
Impact
Values are derrived from a variety of categories related to the design, overall function, and historical influence of this aircraft in aviation history.
Overall Rating
The overall rating takes into account over 60 individual factors related to this aircraft entry.
62
Rating is out of a possible 100 points.
Relative Maximum Speed
Hi: 750mph
Lo: 375mph
This entry's maximum listed speed (659mph). 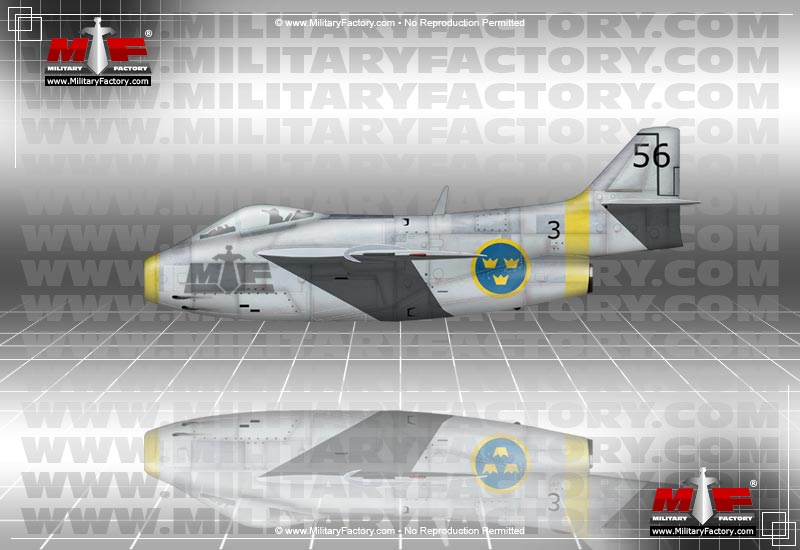