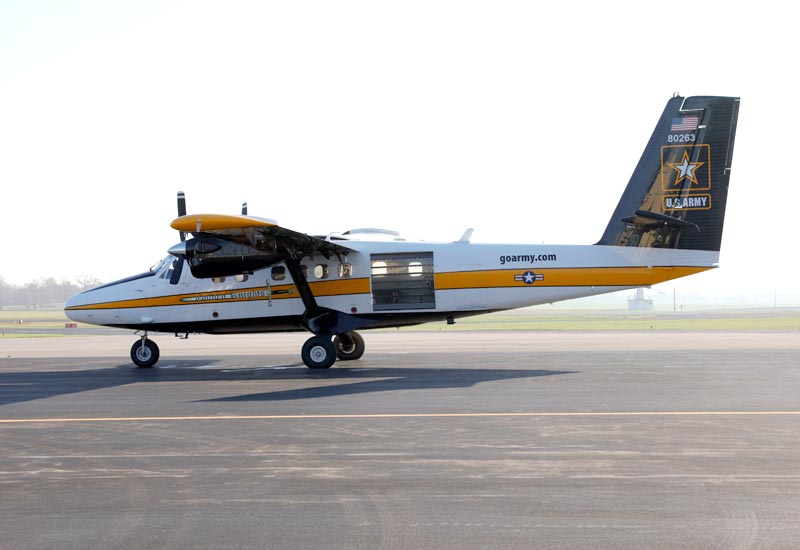 Despite its introduction in 1966, the de Havilland Canada Twin Otter series continues in service with many air forces today.

Authored By: Staff Writer | Last Edited: 06/12/2019 | Content ©www.MilitaryFactory.com | The following text is exclusive to this site.
Introduced in 1966, the de Havilland Canada DHC-6 "Twin Otter" twin-turboprop utility platform has gone on to see worldwide service and production exceeding 960 units as of mid-2018. The series was developed from the earlier single-engined DHC-3 "Otter" (detailed elsewhere on this site) which arrived in 1953 and has managed to maintain an active presence in the skies today (2018) - the aircraft itself a further development of the earlier DHC-2 "Beaver" (also detailed elsewhere on this site). The DHC-6 remains in production with operators ranging from Algeria and Australia to Venezuela and Yemen - both at the civilian and military market levels.

The Twin Otter makes use of shoulder-mounted, fuselage-braced wings to achieve lift in short order. To each wing mainplane member is fitted a powerful Pratt & Whitney Canada turboprop engine given excellent ground clearance for their spinning propeller blades. The cockpit, seating two side-by-side, is positioned overlooking the nose in the usual way and offers the crew excellent vision of the surrounding / upcoming terrain. The fuselage is slab-sided and incorporates the passenger cabin lined with windows. The empennage tapers ever-so-slightly and is capped by a single vertical fin with mid-mounted horizontal planes. A fixed tricycle undercarriage is used for ground running and also provides strong rough-field performance, allowing the Twin Otter to be a very versatile machine (landing on dirt airfields, sand and the like). Other forms substitute the wheeled undercarriage with twin floats to allow for operations on water (take-off / landing) allowing the aircraft to be operated nearly anywhere in the world.

Work on what was to become the Twin Otter began in 1964 as de Havilland Canada looked for a successor to its own DHC-3. The DHC-3 framework and proven pedigree were used in the general make-up of the newer DHC-6 and a first-flight in prototype form was recorded on May 20th, 1965. A key difference between the DHC-3 and the DHC-6 became the latter's wing-mounted twin turboprop engine arrangement - whereas the DHC-3 only fitted a single engine in its nose.

Six aircraft were constructed for the trials program under the "Series 1" designation and, with the seventh aircraft onwards, production ensued in 1965. These examples were known as "Series 100" aircraft and 108 examples were completed, powered by 2 x Pratt & Whitney Canada PT6A20 turboprops. The "Series 110" became an offshoot of this line and were aircraft modified to serve in British civilian air space.

For 1968, a revised / improved model was debuted as the "Series 200" which introduced a redesigned nose and improved performance overall along with other more subtle structural changes (including a larger fuselage cargo/access door).
From this work (aircraft 231 and beyond), the "Series 300" arrived in 1969 with the switch to the PWC PT6A-27 series turboprop engine of 680 horsepower output. Production, running in 1988, delivered 614 total units to various global customers. The "Series 300S" designation was used on eleven examples pushing a new 11-seat standard with anti-skid system and wing-mounted spoilers. These were eventually modified back their original Series 300 forms. "Series 300M" were two aircraft proposed as military-minded transports but little market interest meant that they were returned to their original Series 300 forms as well. The "Series 310" were Series 300 aircraft modified to serve in British civil air space and the "Series 320" followed suit but with the Australian marketplace in mind.

Viking Air of Victoria, British Columbia (the company established in 1970) then purchased the existing DHC-6 line (as well as all applicable machinery and production space) and secured the rights to the previous de Havilland Canada aircraft beginning with the DHC-1 in 1983. They then introduced the "Series 400" Twin Otter in mid-2010, outfitted with 2 x Pratt & Whitney Canada PT6A-34 engines and variable undercarriage options (including floats and skis). The "Series 400S" has been developed as a lighter-weight, dedicated seaplane derivative and this design was subsequently introduced in 2017.

Beyond the stated civilian-minded DHC-6 platforms, there have been several notable military market models: the CC-138, based in the Series 300 design, was used by Canadian Forces in the Search & Rescue (SAR) role. The UV-18A was used, for a time, by Army forces of the Alaska National Guard while the UV-18B was taken on by the United States Air Force Academy as a parachute trainer platform. The UV-18C were three Series 400 aircraft obtained in 2013 by the United States Army.

June 2019 - Viking Air is to begin pushing its DHC-6 Twin Otter product for the maritime surveillance, ISR, and SAR roles through a nine-month global tour covering all major continents.

(Showcased performance specifications pertain to the de Havilland Canada DHC-6 Series 300 production variant. Compare this aircraft entry against any other in our database. View aircraft by powerplant type)
None.

Values are derrived from a variety of categories related to the design, overall function, and historical influence of this aircraft in aviation history.
Overall Rating
The overall rating takes into account over 60 individual factors related to this aircraft entry.
30
Rating is out of a possible 100 points.
Relative Maximum Speed
Hi: 200mph
Lo: 100mph
This entry's maximum listed speed (196mph).