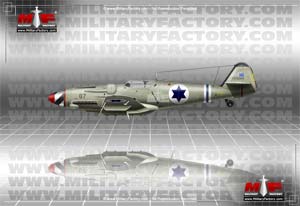 The Messerschmitt Bf 109 became one of the classic fighting aircraft of World War 2 (1939-1945), being progressively updated throughout the conflict to keep the line viable. The type was produced in the tens of thousands and proved the perfect counter to the English Supermarine Spitfire for her entire involvement in the war. The line was so successful that many forms soldiered on into the post-war years under various guises and with various global operators.

Towards the end of the conflict, Avia of Czechoslovakia was charged with producing the Bf 109G (G-6 and G-14 models) single-seat fighters as well as the related Bf 109G-12, a twin-seat flight training platform. Despite this initiative, the war in Europe was over in May of 1945, leaving Czechoslovakia with large supplies of Bf 109 airframes without owners. This led to the company to completing at least twenty-one Bf 109G-6 fighters under the factory designation of "C-10" and these were operated by the Czechoslovakians as the "S-99". The training version, of which twenty-three were completed, became the "CS-99". The S-99 was issued to the Czechoslovakian National Air Guard.

By and large, these aircraft were faithful to their wartime counterparts but lack of additional Daimler-Benz DB605 inline engines soon meant that Avia was forced to find a suitable powerplant replacement - so this became the Junkers Jumo 211F V-12 inline engine of 1,350 horsepower which were readily available to the company (and also powered the wartime Heinkel He 111 medium bombers of Germany). The end result was a Bf 109 offshoot designated locally as the "S-199" and, in both form and function, the S-199 was essentially a re-engined Bf 109G model. Armament included 2 x 20mm MG151/20 cannons under the wings and 2 x 13mm MG131 machine guns over the nose. The hub-mounted cannon was not included in the armament mix. Beyond the standard, fixed weaponry was provision to carry a single 551lb bomb or up to 4 x 155lb bombs.

The Czechoslovakia Air Force received its first S-199 in February of 1948 and production by Avia eventually totaled 559 aircraft. The reworked fighter was not an outright success for it proved to have poor handling when compared to the original incarnation mainly due to the replacement engine fit. There was also a possibility of the synchronizing gear for the cowl machine guns to fail and have the pilot shoot off his own propeller during flight. Nevertheless, it was available in the numbers necessary and provided local industry with work and Czech airmen with a flying classroom. Production of the S-199 spanned into 1951 and beyond the S-199 fighter version was the armed CS-199 trainer form (built from the S-199 stock) and the unarmed C-210 trainer form. The D-199 was a dedicated reconnaissance platform.

Israel become the other prominent S-199 operator when, in May of 1948, the country secured an order for twenty-five of the fighters to stock its newly-founded Israeli Air Force (IAF). These quickly formed the IAF's first fighter squadron (101 Squadron and were pressed into combat service against neighboring Egypt as soon as they were readied. These aircraft were used in the air-to-air and air-to-ground role and claimed the first Israeli air victories in IAF history. Despite their seemingly good showing, the fighters were not well-liked by air and ground crews due to their reliability and combat performance. The type also proved tough to keep flying under combat conditions.

As completed, the S-199 featured an overall length of 29.3 feet, a wingspan of 32.5 feet and a height of 8.5 feet. Empty weight was 5,850lb against an MTOW of 8,245lb. Performance included a maximum speed of 370 miles per hour with a combat radius of 530 miles and a service ceiling reaching 28,500 feet. Rate-of-climb was 2,200 feet-per-minute.©MilitaryFactory.com
Note: The above text is EXCLUSIVE to the site www.MilitaryFactory.com. It is the product of many hours of research and work made possible with the help of contributors, veterans, insiders, and topic specialists. If you happen upon this text anywhere else on the internet or in print, please let us know at MilitaryFactory AT gmail DOT com so that we may take appropriate action against the offender / offending site and continue to protect this original work.
Advertisements

Czechoslovakia; Israel
(OPERATORS list includes past, present, and future operators when applicable)
✓ Air-to-Air Combat, Fighter
General ability to actively engage other aircraft of similar form and function, typically through guns, missiles, and/or aerial rockets. ✓ Interception
Ability to intercept inbound aerial threats by way of high-performance, typically speed and rate-of-climb. ✓ Ground Attack (Bombing, Strafing)
Ability to conduct aerial bombing of ground targets by way of (but not limited to) guns, bombs, missiles, rockets, and the like.

(Showcased performance specifications pertain to the Avia S-199 production variant. Performance specifications showcased above are subject to environmental factors as well as aircraft configuration. Estimates are made when Real Data not available. Compare this aircraft entry against any other in our database or View aircraft by powerplant type)
STANDARD, FIXED:
2 x 20mm MG 151/20 cannons
2 x 13mm MG 131 Heavy Machine Guns (HMGs) 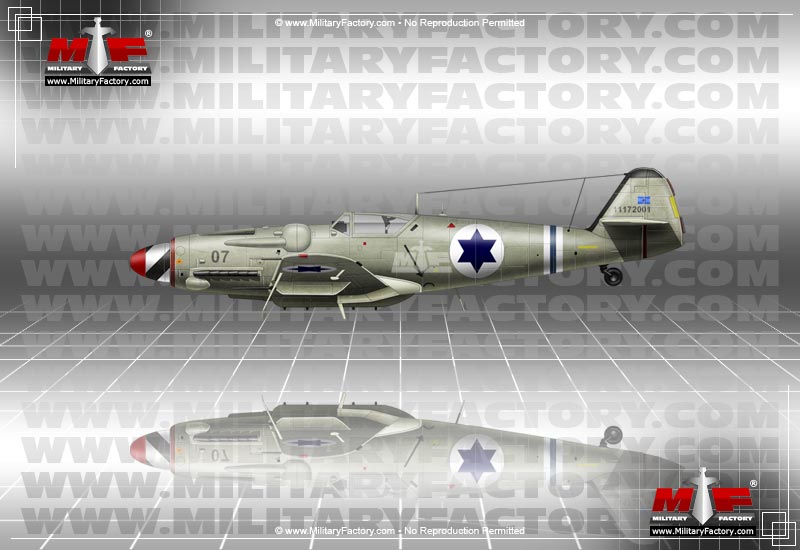