Interest in the Bell D-188 on the part of the USN and USAF ultimately waned by 1961, leaving just a mockup completed.

Authored By: Staff Writer | Last Edited: 06/14/2018 | Content ©www.MilitaryFactory.com | The following text is exclusive to this site. 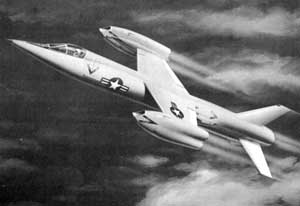 In January of 1954, Bell engineers finally saw the fruits of their labor concerning the Model 65 aircraft - a Vertical Take-Off and Landing (VTOL) research system combining the fuselage of a Schweizer glider with the wings of a Cessna 170. The undercarriage skids were borrowed from a Bell 47 helicopter. To this was added a pair of Fairchild J44 turbojets delivering 1,000lb thrust each and installed under the shoulder-mounted mainplanes. The engines were given the capability to be tilted along an axis - from vertical (for landing / take-off actions) to horizontal (for level flight). The Model 65 was used up until 1955 by which point the focus of Bell engineers fell to other, more pressing, projects.

Despite the end of the Model 65, the completed work proved valuable in another company initiative - the Bell "D-118". This design was born to fulfill a request by the United States Navy (USN) and United States Air Force (USAF) for a shared supersonic multirole aircraft design with inherent VTOL capabilities. It was intended to offer the performance seen in the Lockheed F-104 "Starfighter" (Mach 2+ straight line speeds) with a broader mission set built-in. The VTOL quality allowed the aircraft to be stationed nearly anywhere in the world and not require the use of a full-length, prepared runway from which to operate from. This could potentially provide American warplanners with a distinct tactical advantage over anything the Soviet Union held in service at the time. The branches envisioned a singular platform able to carry out such combat sorties as air defense, fleet defense, interception of high-level bombers, general fighter duties, and fighter-bomber runs.

The design had an overall conventional configuration for the most part - the sole pilot was seated in a cockpit at the nose of the fuselage behind a sharply-pointed nosecone, straight wing appendages were shoulder-mounted at the fuselage sides, and the tail unit relied on a traditional single-finned arrangement with the horizontal planes set low along the aft fuselage sides. The tail planes were all swept rearwards for aerodynamic efficiency while the mainplanes tapered from the wingroots to the wingtips to which pivoting "pods" were mounted. These gave the aircraft the necessary lifting / hovering capability as well as added thrust in forward flight. Dimensions of the aircraft included a span of 23.8 feet, a length of 62 feet, and a height of 12.8 feet.

Proposed armament was 2 or 4 x 20mm internal cannons with support for 108 x 2.75" (70mm) aerial rockets (held in an internal, retractable weapons bay) and up to 4,000lb of ordnance in the form of early-generation Air-to-Air Missiles (AAMs) or conventional drop stores carried across eight total underwing hardpoints.

Internally, the aircraft was to have a rather complex arrangement due to its VTOL nature - carrying no fewer than eight turbojets. Six were General Electric J85-GE-5 series engines (2,600lb thrust each) and two were General Electric J-85-GE-19 types. Two turbojets were fitted to each swiveling wing pod with the remaining units installed within the fuselage; two mounted aft of the cockpit (to help balance vertical lift thrust) and two arranged horizontally (for forward thrust) and exhausting through a basic set of exhaust ports at the rear of the fuselage.

The original product designation became "Model 2000" and Bell marked the USN model as the D-188 and the USAF model as the D-188A (there would be slight differences between each service model to fulfill special naval requirements). In formal service, the models were set to carry the respective designations of "XF3L-1" and "XF-109" though these were never officially assigned.

Between 1959 and 1960, USN authorities had moved away from the Bell venture as mounting delays with the engine sets continued and the project budget grew as a result. This left the USAF as the sole interested service so a mockup was completed and finally unveiled for the first time in early December of 1960. However, the USAF followed the USN lead in early-1961 by terminating their interest in the complex and expensive Model 2000. Thus ended the D-188 VTOL supersonic fighter initiative for Bell and true VTOL fighter flight was not realized until the introduction of the British "Harrier" fighter-bomber during the late-1960s.

Some performance figures were estimated for the unique Bell D-188: a maximum speed of Mach 2.3, an operational range out to 2,300 miles, and a combat radius of 1,350 miles. Its service ceiling was 60,000 feet. Empty weight was listed at 13,800lb against a Maximum Take-Off Weight (MTOW) of 24,000lb.
Advertisements

(Showcased performance specifications pertain to the Bell D-188A (XF-109) production variant. Compare this aircraft entry against any other in our database or View aircraft by powerplant type)
PROPOSED:
2 OR 4 x 20mm internal cannons
108 x 70mm aerial rockets held in an internal bay

Up to 4,000lb of ordnance (missiles or bombs) held across eight total underwing hardpoints. 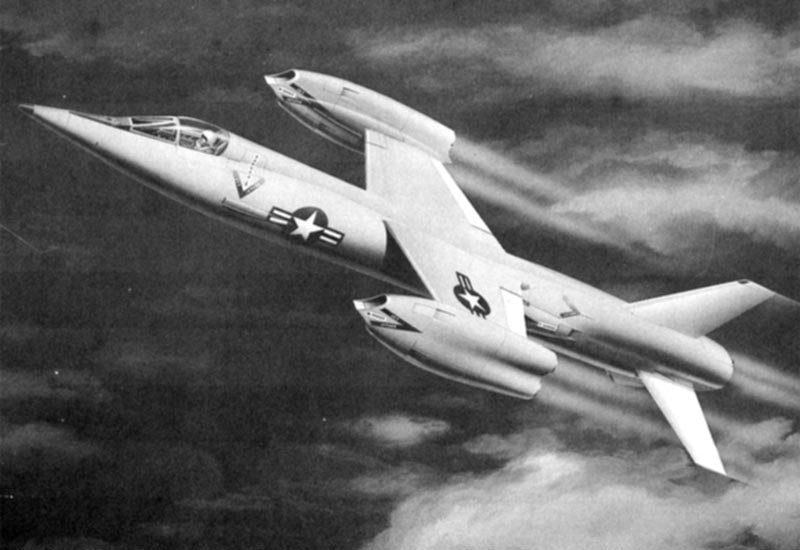