The Mil Mi-28 Havoc has since become the standard attack helicopter for the Russian Air Force and Army - fielded alongside the rival Kamov Ka-52 series. 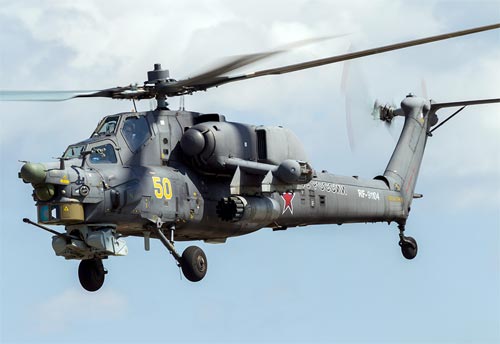 The Mil Mi-28 (NATO reporting name of "Havoc") was a product of the Cold War designed as an anti-tank attack platform similar in scope and function to the American Hughes AH-64 Apache series. As in the Apache, the Mi-28 featured an armored tandem-seat, stepped cockpit for a pilot and weapons officer, a chin-mounted turreted cannon and wingstubs along the fuselage sides for various munitions options - rockets and anti-tank missiles.

The Mi-28 system was on the drawing boards by early 1980 and flew in head-to-head competition trials with the Kamov-inspired single-seat, twin-rotor Ka-50 design. Though the eventual loser in the trials, the Mi-28 was still accepted for continued development and entered serial production in 1987 as the "Mi-28A" - being formally debuted to the public in the Paris Air Show of 1989. Though production for the initial mark did not last long (primarily due to its daytime-only operational status), the system was evolved in the Mi-28N day-night attack system (identified by the addition of a radome over the main rotor mast). Development of this new breed was slow as priority was still handed to the Ka-50 series and defense budgets were terribly slashed after the fall of the Soviet Empire in 1991. However, due to the fall of the Soviet Union, the much-limited Ka-50 series began giving ground to the multi-role qualities of the Mi-28 which eventually superseded the Ka-50 as the standard Russian attack helicopter in the post-Cold War world. The proved more adaptable to the ever-changing conditions of the modern battlefield of the time, were more conventional in their two-crew arrangement and were less expensive to produce in the numbers required. After the protracted development of the new day-night Mi-28N ("Night Hunter"), an official introduction to the inventory of the Russian Air Force service occurred on October 15th, 2009. The Mi-28 and Ka-50 have since been fielded side-by-side, interestingly both now representing the Russian standard attack helicopter. The Russian Army received their first Mi-28Ns in 2006 as a replacement for their aging Mi-24 Hinds in the dedicated attack role.

The Havoc features a distinct elongated nose design which houses the required electronics suite. The crew of two (pilot in rear with the gunner in front) sit in tandem in a fully-armored framed cockpit capable of handling small arms fire up to 14.5mm in nature. The pilot (rear) benefits from the use of an advanced helmet-mounted display. Interestingly, piloting controls are not made redundant in the aft cockpit in an effort to promote strict concentration from either crewmember in his respective cockpit. Power is derived from 2 x Klimov-brand turboshaft engines driving a five-blade main rotor and a four blade tail rotor (facing starboard) while generating 2,200 horsepower each. Interestingly enough, despite its classification of "attack helicopter", the Mi-28 Havoc features a three-person passenger compartment just aft of the main cockpit (similar to the larger Cold War-era Mil Mi-24 "Hind" series helicopters). However, this compartment is intended moreso as a rescue feature for downed airmen than for the transporting armed combatants into battle. Base armament of the helicopter is a powered underslung 30mm Shipunov 2A42 Autocannon in a chin mounting while wingstubs provide four hardpoints for anti-tank missiles, rocket pods and gunpods as required. The Havoc can, therefore, engage soft and hard targets at ease. The undercarriage is fixed and consists of two main landing gear legs at front and a tail wheel at the rear. Overall design includes the forward-set armored cockpit, engines fitted high amidships, a long-running empennage housing the tail rotor shaft and a vertical tail fin capping the end of the aircraft.

Russia remains the primary operator of the Mi-28 Havoc series though an export version has been offered to several interested nations including North Korea (Mi-28NAe), Iraq and possibly India, Algeria and Venezuela. Though only some 52 or so Havocs are currently active in the Russian inventory (as of 2012), it is expected that, at delivery's end (perhaps in 2015), nearly 70 systems will be available to the Russian Air Force. To date, a dozen make up a training squadron while the remainder form three regiments.

Indian interest in procuring 22 examples of the Mi-28N (with Western electronics) remains, though the Hughes AH-64 Apache series may well replace the interest due to the complex and expensive nature of the conversion process required.

The Russian-Iraq deal for 30 Mi-28N helicopters was officially secured and announced on October 9th, 2012. This make Iraq just one of three formal operators of the Mi-28, joining Russia and Kenya - the latter having ordered 16 examples.

Mil has unveiled an all-new dedicated trainer variant of its formidable Mi-28 as the Mi-28UB. The platform is intended for those crew who will ultimately pilot the Mi-28N variant. The Mi-28UB features redundant controls at both cockpits to spread workload between the two pilots (unlike the single-stick configuration of the original Mi-28 production model). The new variant will potentially open sale of the Mi-28 to interested customers now that a dedicated trainer is available (previously, Mi-28 students trained on Mi-24 "Hinds"). The Mi-28 is intended as the modern replacement for the Mi-24 - though the Mi-24 itself has been modernized for its large export base as the Mi-35.©MilitaryFactory.com
Note: The above text is EXCLUSIVE to the site www.MilitaryFactory.com. It is the product of many hours of research and work made possible with the help of contributors, veterans, insiders, and topic specialists. If you happen upon this text anywhere else on the internet or in print, please let us know at MilitaryFactory AT gmail DOT com so that we may take appropriate action against the offender / offending site and continue to protect this original work.

April 2017 - The Mi-28 was deployed by Russian forces operating in Syria as part of the ongoing Syrian Civil War which began in 2011. At least one was lost (reportedly through human error) in the conflict to date killing both of its crew. These units are operating out of Hmeymim.

August 2017 - The Mi-28UB has been added to the Havoc helicopter lineup. This model represents a twin-seat, twin-controls trainer platform for the attack model Night Hunters (Mi-28N). Both pilots can now take control of the helicopter from their respective positions, which also include all-new avionics and communications. Additional armoring and shock-absorbing seats also now improves survivability. The UB model retains full combat capability despite its categorization as a trainer.

November 2017 - On November 9th, 2017, it was announced that the Russian military had taken delivery of the first batch (of eight) Mil Mi-28UB trainer forms (debuted in 2013) of the Mi-28 attack helicopter. These retain full combat capabilities despite their trainer designation and are based in the Mi-28N attack model. unlike the N-model, however, both cockpit positions in the UB-model are given flight controls. up to 26 UB-models are said to be contracted for.

September 2020 - First-deliveries of the modernized Mi-28NM have been made to Russian armed forces. Serial production is said to now be underway. The NM model, a fifth-generation development begun in 2008, provides enhanced weapons support, more inherent stealth/survival features, and increased operational ranges.

April 2022 - A Russian Mi-28 was confirmed to have been downed by Ukrainian forces by way of British MANPAD system.

Algeria; Iraq; Kenya; Russia; Venezuela
(OPERATORS list includes past, present, and future operators when applicable)
✓ Ground Attack (Bombing, Strafing)
Ability to conduct aerial bombing of ground targets by way of (but not limited to) guns, bombs, missiles, rockets, and the like. ✓ Close-Air Support (CAS)
Developed to operate in close proximity to active ground elements by way of a broad array of air-to-ground ordnance and munitions options. ✓ Training (General)
Developed ability to be used as a dedicated trainer for student pilots (typically under the supervision of an instructor).

(Showcased performance specifications pertain to the Mil Mi-28N (Havoc) production variant. Compare this aircraft entry against any other in our database or View aircraft by powerplant type)
STANDARD:
1 x 30mm Shipunov 2A42 cannon in powered traversing chin mounting.

General Assessment
Firepower
Performance
Survivability
Versatility
Impact
Values are derrived from a variety of categories related to the design, overall function, and historical influence of this aircraft in aviation history.
Overall Rating
The overall rating takes into account over 60 individual factors related to this aircraft entry.
82
Rating is out of a possible 100 points.
Firepower Index (BETA) 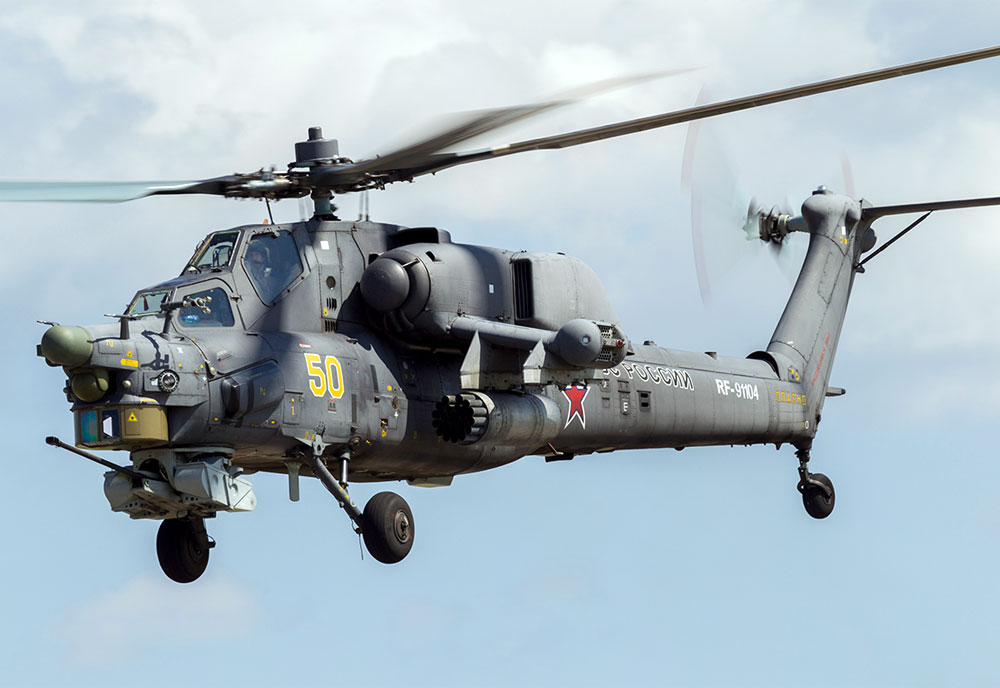 Image from the Russian Ministry of Defense.
2 / 15 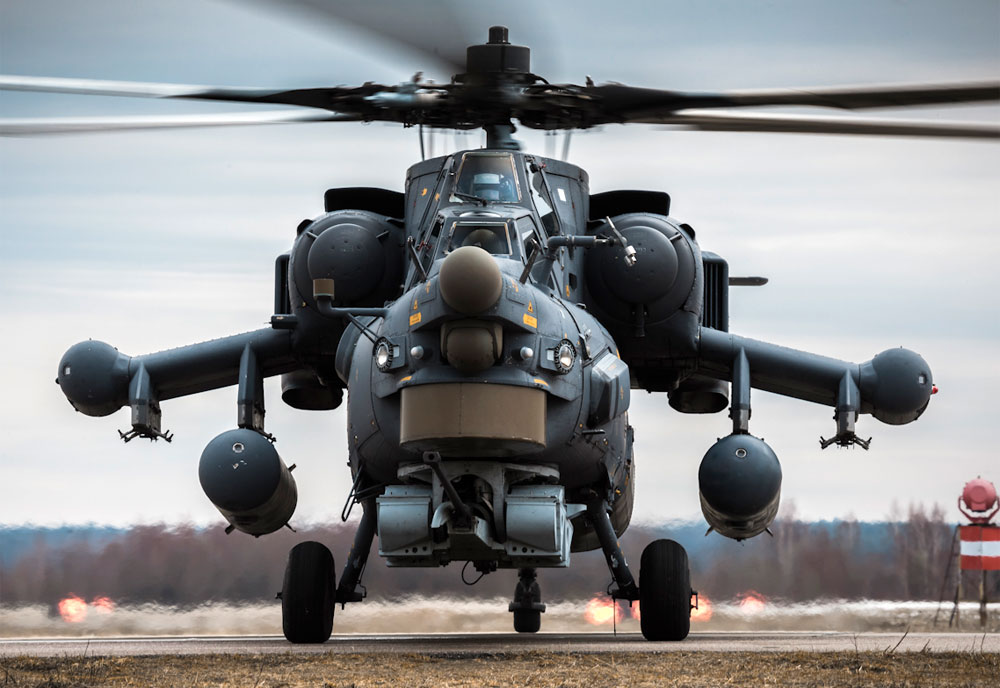 Image from the Russian Ministry of Defense.
3 / 15 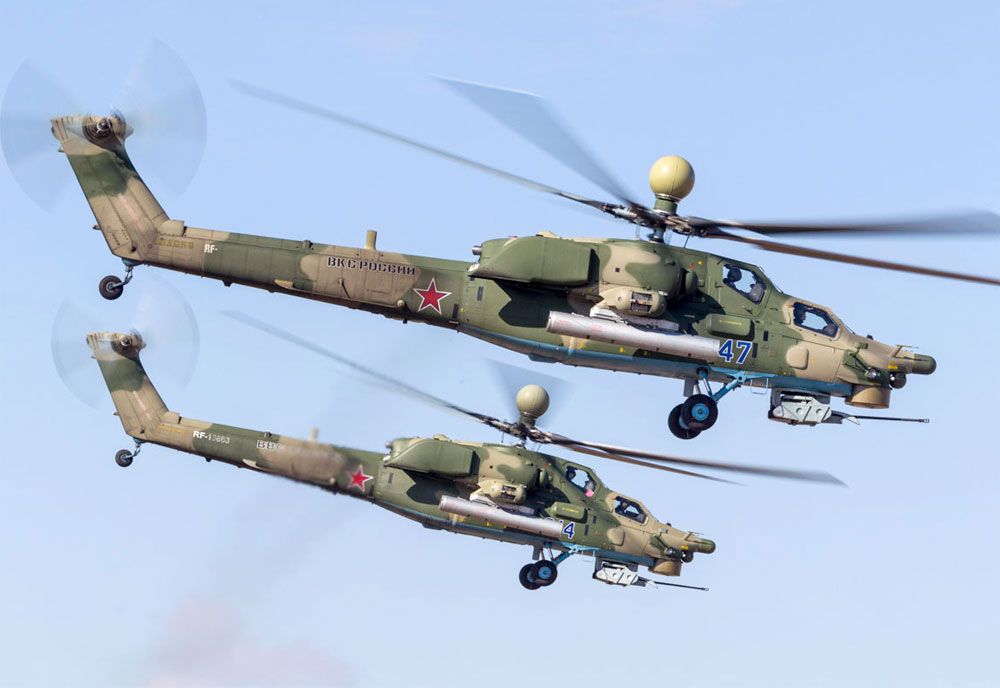 Image from the Russian Ministry of Defense.
4 / 15 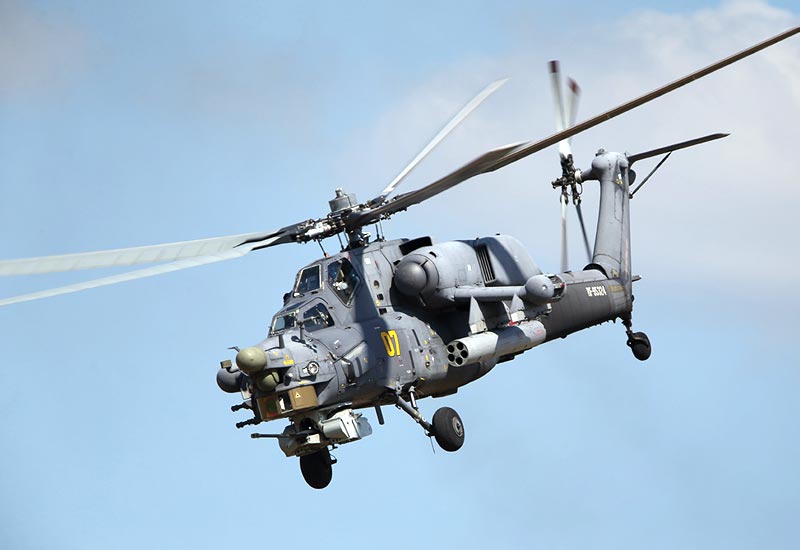 Image from the Russian Ministry of Defense.
5 / 15 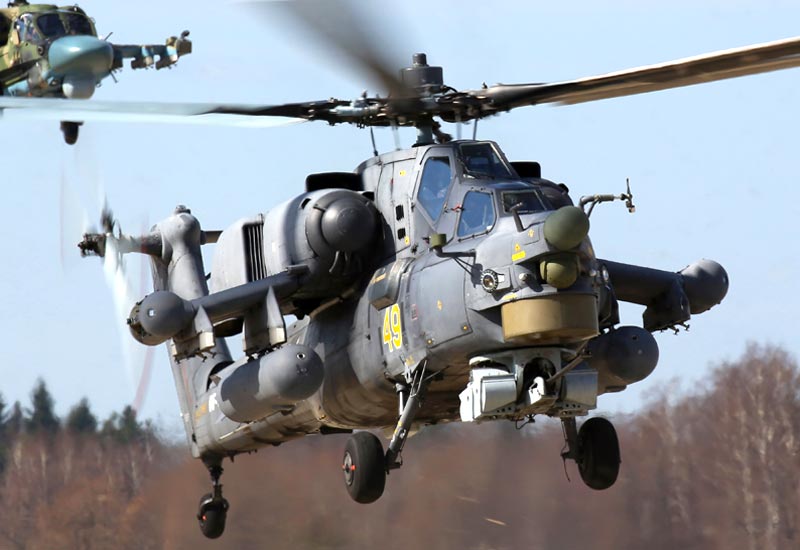 Image from the Russian Ministry of Defense.
6 / 15 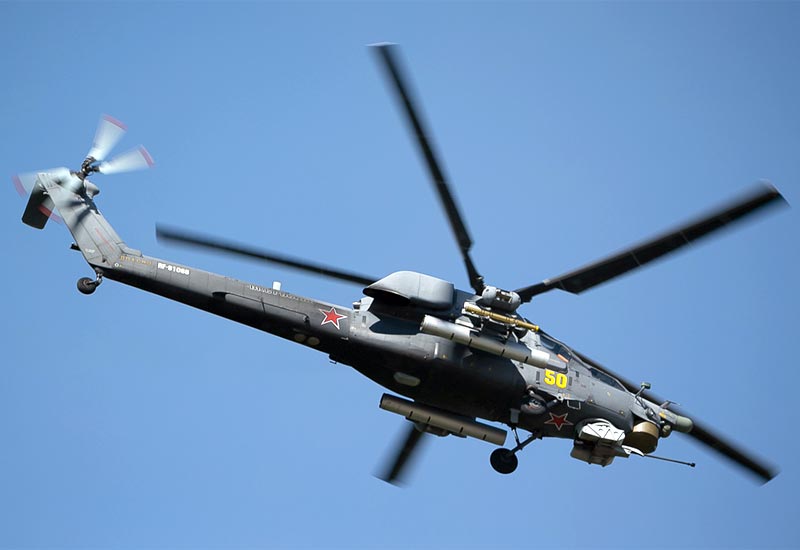 Image from the Russian Ministry of Defense.
7 / 15 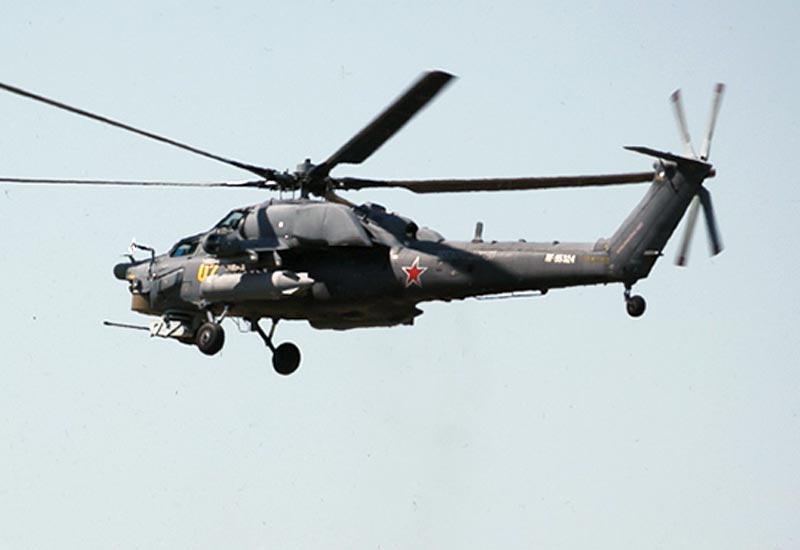 Image from the Russian Ministry of Defense.
8 / 15 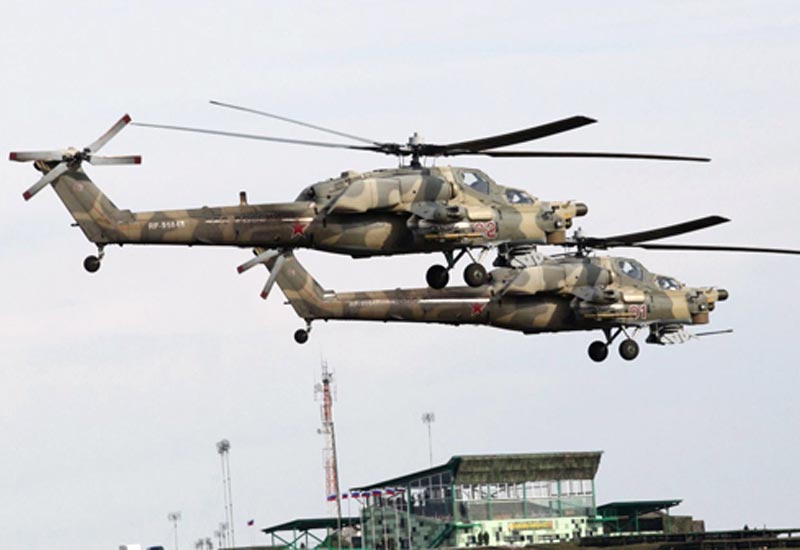 Image from the Russian Ministry of Defense.
9 / 15 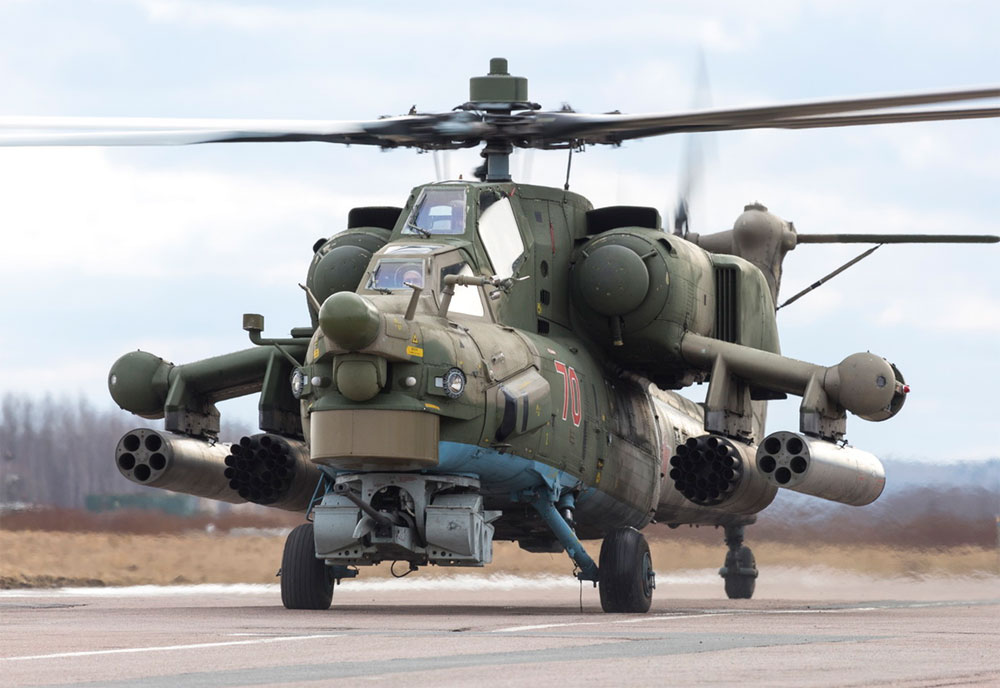 Image from the Russian Ministry of Defense.
10 / 15 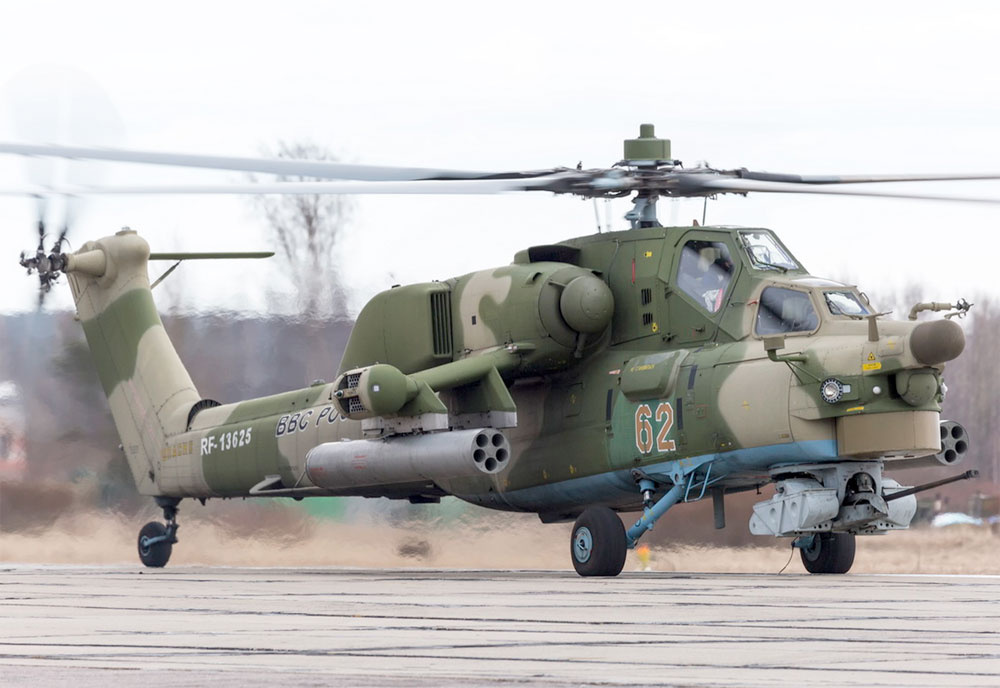 Image from the Russian Ministry of Defense.
11 / 15 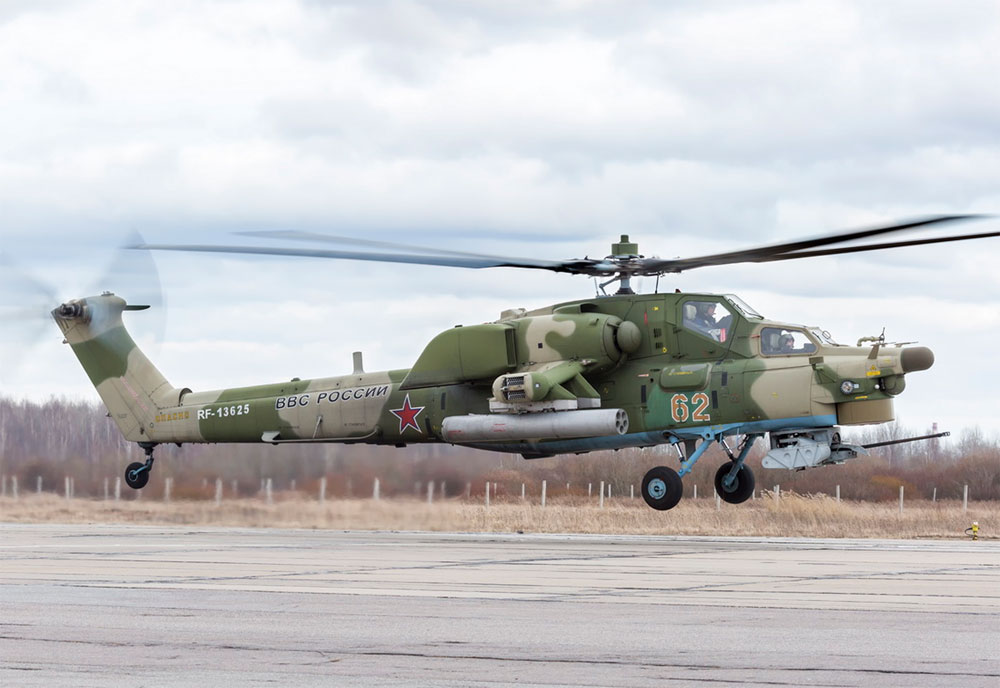 Image from the Russian Ministry of Defense.
12 / 15 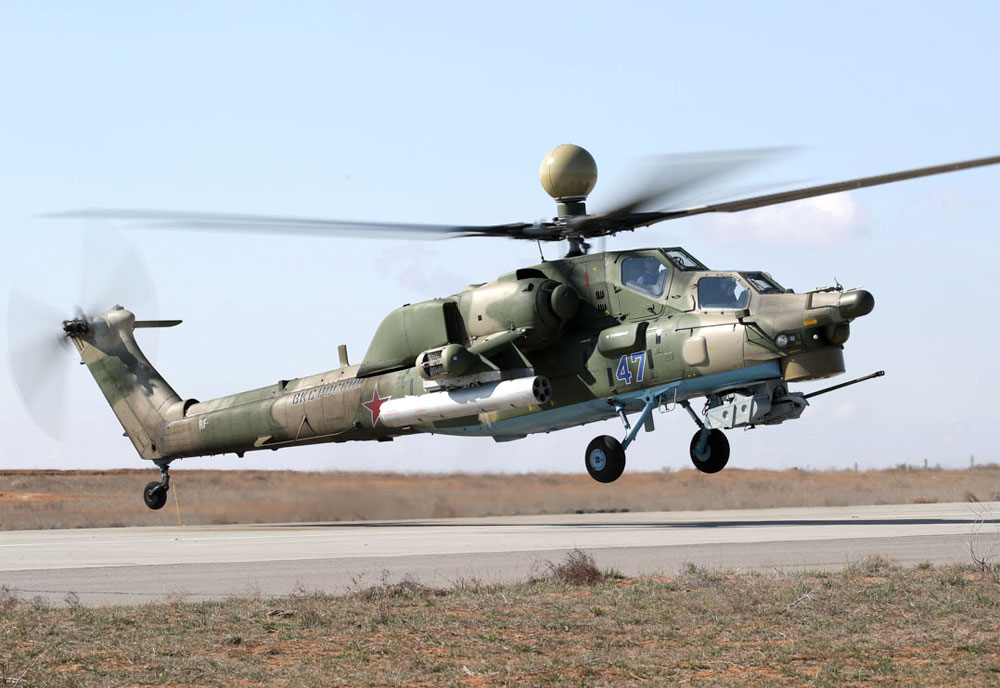 Image from the Russian Ministry of Defense.
13 / 15 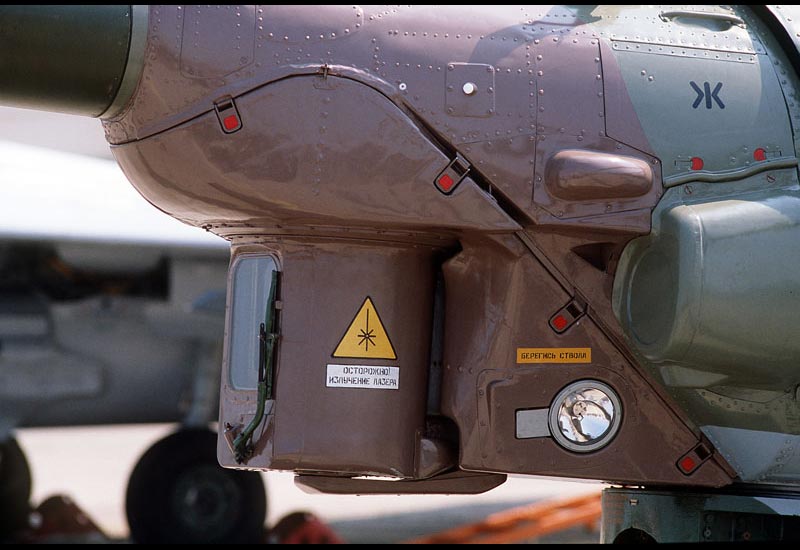 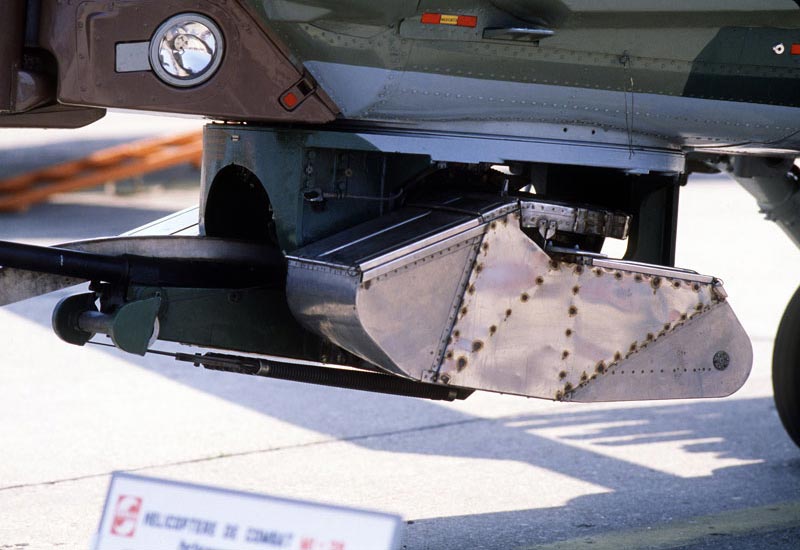 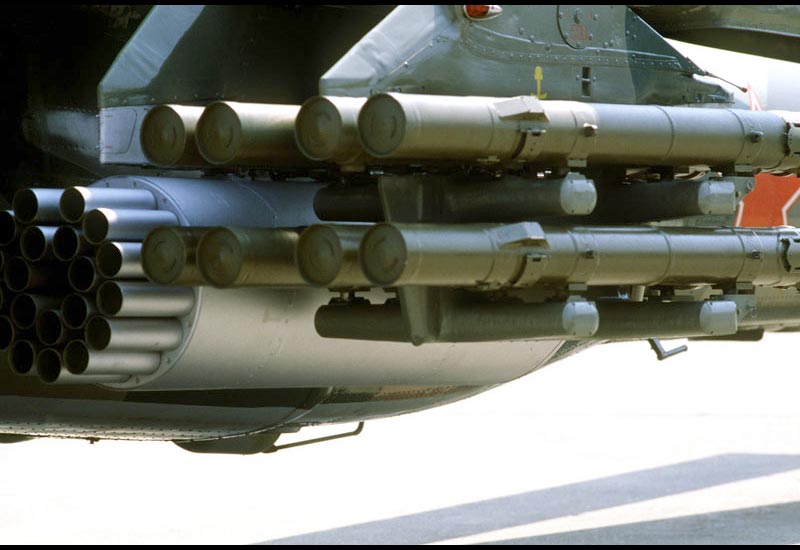