Nearly 5,000 MD Helicopters MD500 models have been produced since introduction occurred in 1982.

Authored By: Staff Writer | Last Edited: 11/17/2020 | Content ©www.MilitaryFactory.com | The following text is exclusive to this site. 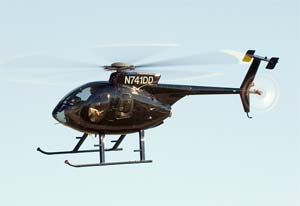 The Hughes . MD Helicopters Model 500 became a commercial success for its time in the mid-to-latter stages of the Cold War years (1947-1991). The series was born in a 1950s United States Army requirement seeking a successor for its expiring line of Bell OH-13 "Sioux" light helicopters then in service (detailed elsewhere on this site). Developed from the Bell Model 407, these extremely-light helicopters were developed after the close of World War 2 (1939-1945) and were subsequently produced in over 2,400 examples for a myriad of global operators. To find its replacement, the Army established the "Light Observation Helicopter" (LOH) program.

A design from Bell, Hiller, and Hughes were selected for head-to-head testing by the Army (the Hughes entry was the "Model 369", to become the "YHO-6" and, finally, the "YOH-6"). Testing took place at Camp Rucker in Alabama to which the Hiller and Hughes designs were selected for further evaluation. The Hughes submission was eventually declared the winner for what was "Round 1" of the selection process. In 1965, this helicopter was officially designated the OH-6A "Cayuse" (detailed elsewhere on this site) and taken into service by the United States Army.

As an aside, the LOH program was revisited in 1967 by the Army to pit Hiller versus Bell. Bell won out with their Model 206A which was inducted into Army service as the OH-58A "Kiowa" - leading the Army to field two light helicopter types for several decades - though the selection of the Bell model did impact the number of Hughes OH-6s originally planned for procurement.

The Cayuse went airborne for the first time in February of 1963 but even before this the Hughes team was envisioning a civilian marketplace form. The designation of "Hughes 500" (or "Model 500") was assigned to the offshoot which, in form and function, was more or less faithful to the military version. Internally, the cabin could be configured to seat five to seven personnel with the crew of two seated at front in a side-by-side arrangement. As with the Cayuse, the Model 500 showcased a teardrop-shaped fuselage with a heavily-windowed front section and hinged side-opening doors for passengers and crew alike. The engine was fitted to the upper aft-half of the fuselage and drove a multi-bladed main rotor sat close to the fuselage roof and a two-bladed tail rotor offset to portside along the tail fin. The powerplant exhausted through a port under the tail stem. The undercarriage was of a simple four-point skid arrangement which made the little helicopter somewhat rugged and more economical to maintain.

Type certification was gained in 1966 with the Model 369H, becoming the Model 500C in service. This mark seated five passengers and was powered by a single Allison 250-C18B series engine developing 317 horsepower. In 1968 arrived an export-minded militarized form of this helicopter in the Model 500M "Defender". In 1969, an improved Model 500C was unveiled with an Allison 250-C20 engine of 400 horsepower. That same year, another related version appeared with more expensive surroundings for the cabin.
Advertisements

In 1976 arrived the Model 500D which sported a redesigned nose. This variant carried an Allison 250-C29B of 420 horsepower. The Model 500E was based in the 500D with a revised nose and intended for VIP / business market travel. This model was type certified in 1982.

The Model 500N lacked a traditional tail rotor and managed torque through a vented tail unit (NOTAR = "NO Tail Rotor"). This model achieved certification in 1991 and carried an Allison / Rolls-Royce 250-C20R/2 engine of 450 horsepower output. The Model 530F was developed for "High-and-High" operating environments and based in the Model 500E. This was powered by an Allison / Rolls-Royce 250-C30P engine of 650 horsepower. Type certification was had in 1984.

That same year, the Hughes Helicopter Division was taken over by McDonnell Douglas (MD) which, in turn, changed designations of the Model 500 line (as in "MD 500").

Foreign production was had in both Italy and Japan. In the former, this was branded under Breda Nardi (pre-Agusta helicopters merger) and covered the Model 500E airframe while, in the latter, Kawasaki Heavy Industries (KHI) of Japan took to local, license production of the helicopter as the Kawasaki-Hughes 396HS.

The Model 500F has also served as the basis for the Unmanned "Little Bird" AH-6 helicopter headed by Boeing (Boeing Rotorcraft Systems). This pilotless aircraft was first-flown on September 8th, 2004 and remains under development for the United States Army as a light attack and reconnaissance helicopter as of this writing (2018). This entry is detailed elsewhere on this site.

The Vietnam War-era OH-6 "Cayuse" light helicopter maintains its own variants listing and is also detailed elsewhere on this site. The MD500 "Defender" has seen production reach 471 units. A first-flight was recorded in 1976 and the type remains in service today (2018). It also has its own lengthy list of variants not covered in this article. The MD600 is a further development of the 500-series and was first-flown in November of 1994. Production has been ongoing since 1995.

The MD500 series helicopters maintain an active presence around the globe - such has been its staying power.

April 2017 - The United States State Department has approved the sale of a dozen MD530F military helicopters to Kenya. These will succeed the elder fleet of MD500 systems currently in service and the deal includes armament fits as well as ammunition.

September 2017 - It was announced that the U.S. Army has committed to the procurement of up to 150 MD500 series helicopters in the "Cayuse Warrior" light armed scout helicopter standard. Some of these will stock the growing fleet of Afghan Air Force helicopters.

October 2018 - Kenya and Lebanon have committed to orders for twelve M530 light scout attack helicopters between them (six and six). Deliveries will take place around mid-2019 and include machine gun and rocket pod weapon systems.

November 2020 - Finnish Army MD500 helicopters are set to receive an avionics modernization to keep the systems viable for the next few decades.

(Showcased performance specifications pertain to the MD Helicopters MD500C (Model 500C) production variant. Compare this aircraft entry against any other in our database or View aircraft by powerplant type)
Military models are armed as needed per mission set through rocket pods, gun pods, cannon pods, and miniguns.

General Assessment
Firepower
Performance
Survivability
Versatility
Impact
Values are derrived from a variety of categories related to the design, overall function, and historical influence of this aircraft in aviation history.
Overall Rating
The overall rating takes into account over 60 individual factors related to this aircraft entry.
36
Rating is out of a possible 100 points.
Relative Maximum Speed
Hi: 200mph
Lo: 100mph
This entry's maximum listed speed (177mph). 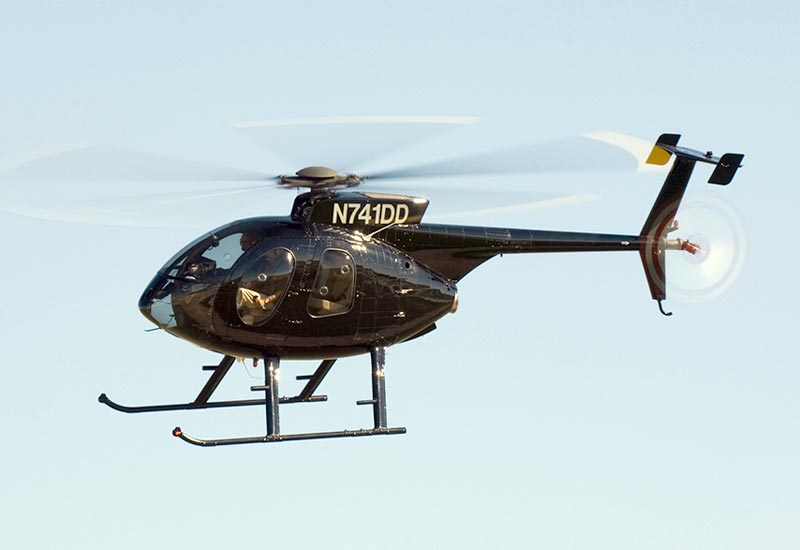