Proposed as an improved low-altitude version of the classic Vought F4U Corsair navy fighter, the Goodyear F2G Corsair was doomed with the end of World War 2.

Authored By: Staff Writer | Last Edited: 08/03/2020 | Content ©www.MilitaryFactory.com | The following text is exclusive to this site. 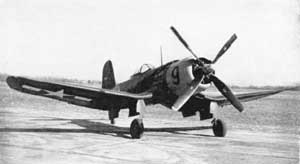 Goodyear was one of the companies charged with large-scale production of the classic, war-winning Vought F4U "Corsair" single-seat, carrier-based fighter. This aircraft served the American and British navies during World War 2 (1939-1945) and posted stellar results as both a dogfighter and ground attack aircraft. Such was its value that the type returned to combat service during the Korean War (1950-1953) in the close-support role. Goodyear aircraft were differentiated by the designation of "FG" with the first models completed being simplified fixed-wing versions of the folding-wing F4U-1 variant. These arrived as the "FG-1". other variants to join the line became the radar-carrying "FG-1E" and the drone-minded "FG-1K". The "FG-4" was a late-war addition.

In time, engineers at Goodyear pushed development of an in-house version intended for the low-altitude dogfighting role based on the F4U-1 - which it knew as the FG-1. The resulting work produced the F2G "Super Corsair", a design centered around the massive and powerful Pratt & Whitney R-4360 "Wasp Major" 28-cylinder, four-row, air-cooled radial piston engine. This engine was the same as used on the Hughes H-4 "Hercules" transport, the upcoming B-50 "Superfortress" strategic bomber, and the soon-to-be Convair B-36 "Peacemaker". On the whole, the form and function of the original F4U was retained in the F2G including the iconic gull wing mainplanes, single rudder tail fin and central cockpit placement.

Work on the new fighter began in the early part of 1944 with an existing FG-1 airframe used as the starting point. The aircraft was given the developmental designation of "XF2G-1" with the impending production model to become the "F2G-1". A new buddle canopy was fitted at amidships to provide better all-around vision out-of-the-cockpit for the pilot. The wings held 6 x 0.50 caliber M2 Browning heavy machine guns and could support conventional drop bombs or rockets underneath. Additionally, the mainplanes were plumbed to support jettisonable fuel tanks (in lieu of bombs) for increased operational ranges away from home carriers. As with the original F4U, the F2G would be able to undertake both fighter and ground attack missions as needed.

Sufficiently interested, the United States Navy contracted for 418 of the F2G-1 production forms. As the war in the Pacific was not an assured victory at this time, the numbers reflected this, particularly if the Goodyear design could exhibit substantial performance gains over the existing F4U mounts in service. A follow-up model, the F2G-2, was to feature more carrier-friendly equipment and ten of this mark were contracted for.

The end result was a product that was powerful and held an impressive offensive punch. Due to its F4U origins, it was also inherently logistically-friendly, a strong trait to have in the grand scheme of the war. First flight of an XF2G-1 prototype came on July 15th, 1945 though further testing revealed some issues with controlling and general performance was not entirely satisfactory. The Empire of Japan surrendered in mid-August and this marked the end of the Pacific War which further placed the Goodyear aircraft project in jeopardy. Even back in February of 1945, the United States Navy had moved ahead in procuring the - the F8F "Bearcat" - which was provided by longtime U.S. Navy aircraft contributor Grumman. Grumman was responsible for another war-winning USN fighter - the F6F "Hellcat". As was the case with many late-war prop-driven developments, the F2G was also threatened by the rise of turbojet-powered naval fighters beginning to emerge in number - further pushing aside prop-driven types from American carrier decks.

In the end, Goodyear could only claim a total of ten of its F2G "Super Corsairs" completed. Five of this total were of the original F2G-1 model and the remainder of the batch were represented by the improved F2G-2 mark. The end of the war, coupled with the other aforementioned points, brought about the end of the aircraft and the contract for 400+ aircraft was cancelled. Several F2Gs did make their way into the civilian market where they saw extended lives in the air as high-performance racers. One surviving example went on to find a home at the Museum of Flight in Seattle, Washington, USA.
Advertisements

OPTIONAL:
Up to 1,600 lb of conventional drop bombs under the wings OR 2 x jettisonable fuel tanks. 8 x 5" (127mm) high-velocity rockets mounted under the wings. 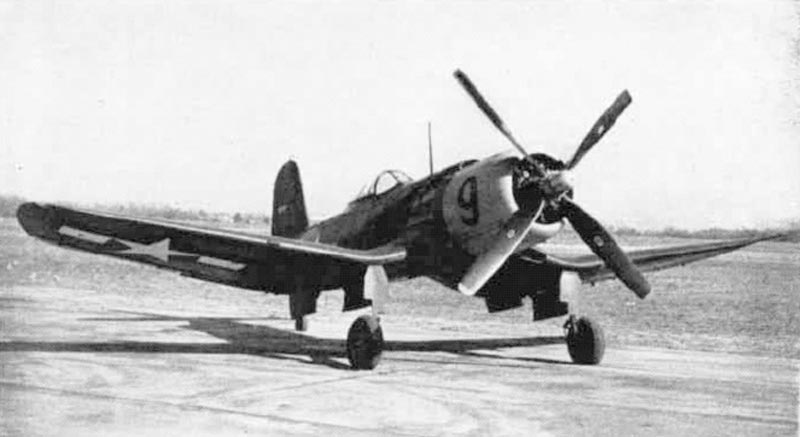 Aviation developments of similar form and function, or related to, the Goodyear F2G Super Corsair...