The Martin B-57 Canberra was the American-produced form of the classic British English Electric Canberra bomber series.

Authored By: Staff Writer | Last Edited: 06/19/2017 | Content ©www.MilitaryFactory.com | The following text is exclusive to this site. 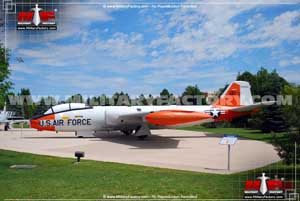 When the United States committed to participation in the Korean War (1950-1953), it pressed into service much of its existing stock World War 2-era equipment while pulling others out of mothballs. One aircraft brought back into the fold was the versatile Douglas A-26 "Invader" which was introduced in 1944 and found its niches as a light/medium bomber and high-speed, heavy assault platform. 2,452 of the type were built which meant that it was available only in limited numbers by 1950 and, furthermore, already pressed to their combat fatigue limitations. Additionally, these aircraft were developed before technology allowed for all-weather service, restricting the A-26 to clear-weather, day-time service.

On September 16th, 1950, the United States Air Force (USAF) put out a requirement for a new attack aircraft built around speed and a serviceable bomb load. To achieve the desired performance, turbojet engines were to be used for propulsion. Specifications required a speed of at least 630 miles per hour with a range out to 1,150 miles, and a service ceiling near 40,000 feet. This would make the aircraft a hard target for interception by the enemy or ground-based fire, giving the design some impunity over the battlefield in the tactical bomber role. As the war in Korea broadened, speed proved of the essence so the requirement further called for modification of an existing airframe for the role.©MilitaryFactory.com
Advertisements

Of the submissions received, the British English Electric Canberra - entering service with the Royal Air Force - was surprisingly selected over the local Martin XB-51 bomber prototype. The Canberra was a record-setting, twin-engine, multi-crew bomber whose performance and ordnance-hauling capabilities seemingly played well into the standing USAF requirement. The aircraft managed a cross-Atlantic flight to reach the USAF for evaluation and this only served to solidify the selection. The Martin XB-51 held several key limitations when set against the USAF requirements, leaving the Canberra the outright winner of the competition and the XB-51 to aviation history. It became one of those rare occurrences in modern USAF history where a foreign-born aircraft was tabbed for considerable American service.

To allow the Canberra to become available in the numbers required by the USAF, the Glen L. Martin Company was charged with licensed, local-production in April of 1951. The product was known in Martin nomenclature as "Model 272" and the USAF designated the aircraft as the "B-57" while retaining its British "Canberra" name. First models became the B-57A and these remained largely faithful to the British Royal Air Force's B.Mk 2 bombers though the American forms carried only a crew of two (instead of three) and power was through 2 x Armstrong Siddeley Sapphire turbojets of 7,200lbs thrust each (instead of the Rolls-Royce Avon of 7,400lbs thrust each). The British Sapphire engines were also locally-produced under license, this by the Wright company as their model J67 engine. Other changes were relatively subtle to conform with the USAF requirement including a revised bomb bay door and canopy.

First flight of a B-57 prototype was on July 20th, 1953 and deliveries began in August of that year. Formal introduction of the line occurred in 1954 though, by this time, the Korean War had ended in the loose 1953 Armistice. Regardless, Martin went on to produce 403 examples for the USAF during the span of 1953 to 1957 and these went on to see considerable service locally and abroad.

The B-57A was improved through the B-57B mark which introduced a more conventional tandem-seating arrangement for the two-crew (pilot and navigator) and new canopy. The B-models brought about use of four underwing hardpoints in addition to the internal bomb bay and relocation of the airbrakes from the wings to the fuselage. Standard armament included 8 x 0.50 caliber M2 Browning heavy machine guns. First flight of a B-model was on June 18th, 1954.

The B-57B was outfitted with 2 x Wright J65-W-5 turbojet engines of 7,220lbs thrust each. This provided the aircraft with a speed of 598 miles per hour and cruising speed of 475 miles per hour. Combat radius was 950 miles while ferry ranges reached 2,720 miles. Its service ceiling was 45,100 feet and rate-of-climb was 6,180 feet per minute. Armament included 4 x 20mm M39 autocannons with 290 rounds per gun. The bomb bay held up to 4,500lbs of ordnance (including nuclear payloads) while the four external hardpoints managed up to 2,800lbs of ordnance. The underwing hardpoints also support the launching of unguided rockets.

With the growing American commitment to Southeast Asia, B-57s were deployed in 1963 during the Vietnam War (1955-1975) and served in both reconnaissance and attack roles. Combat service began in August of 1964 with their first combat sortie in 1965. Mission types included ground attack (bombing, rocket attacks, strafing) and night intruder runs though losses proved heavy - 58 lost to against the 94 deployed, and not all to enemy action. The 8 x 0.50 caliber machine gun arrangement quickly proved wanting for strafing and these gave way to a 4 x 20mm cannon armament instead, these installed as pairs in the wings (British Canberras featured 4 x 20mm cannons in a ventral gunpack). As ground support aircraft, Canberras excelled in the role with their combination of handling, performance, and ordnance-carrying capabilities despite their losses. Some Canberras were in service with South Vietnamese forces for a time and Australia deployed their own British B.Mk 20 Canberra models in the conflict (the Canberra was actually named after the Australian capital, Australia being the Canberra's first export customer). The last B-57B left Southeast Asia in November of 1969.

The USAF retired its B-57 line in 1983 while a few were in use with special agencies for non-combat service - including NASA. Eight B-57A production models were completed and these were followed by 202 of the improved B-57B bomber forms. The B-57C featured dual-controls for the training role and saw production reach 38 examples. The B-57E was a target tug form and produced in 68 examples. The B-57G was the B-57B bomber model converted for the night intruder role and outfitted with laser designation and FLIR (Forward-Looking InfraRed) to which 16 conversions took place.

Beyond its Vietnam War service with the Americans, the B-57 also came into play with the forces of Pakistan during its wars against India during the 1960s and 1970s. Interestingly, this proved a case where both sides fielded roughly the same product for India was the recipient of the British Canberra version. Pakistan officially removed its B-57 fleet from frontline service in 1985. Taiwan became the only other foreign operator of the B-57 and these served with its air force.

Unlike other classic historical military aircraft, many B-57s were salvaged after their useful service lives had ended, preserved as museum showpieces or outdoor displays today - many being primarily of the RB-57 reconnaissance marks.©MilitaryFactory.com
Note: The above text is EXCLUSIVE to the site www.MilitaryFactory.com. It is the product of many hours of research and work made possible with the help of contributors, veterans, insiders, and topic specialists. If you happen upon this text anywhere else on the internet or in print, please let us know at MilitaryFactory AT gmail DOT com so that we may take appropriate action against the offender / offending site and continue to protect this original work.
Advertisements

Pakistan; Taiwan; United States
(OPERATORS list includes past, present, and future operators when applicable)
✓ Ground Attack (Bombing, Strafing)
Ability to conduct aerial bombing of ground targets by way of (but not limited to) guns, bombs, missiles, rockets, and the like. ✓ Close-Air Support (CAS)
Developed to operate in close proximity to active ground elements by way of a broad array of air-to-ground ordnance and munitions options. ✓ Intelligence-Surveillance-Reconnaissance (ISR), Scout
Surveil ground targets / target areas to assess environmental threat levels, enemy strength, or enemy movement. ✓ Training (General)
Developed ability to be used as a dedicated trainer for student pilots (typically under the supervision of an instructor).

(Showcased performance specifications pertain to the base Martin B-57 Canberra production variant. Performance specifications showcased above are subject to environmental factors as well as aircraft configuration. Estimates are made when Real Data not available. Compare this aircraft entry against any other in our database or View aircraft by powerplant type)
STANDARD:
8 x 0.50 caliber M2 Browning heavy machine guns (original).
4 x 20mm M39 cannons in wings (later)

OPTIONAL:
Up to 4,500lbs of internal stores (original).
Up to 2,800lbs of external stores held underwing (later). 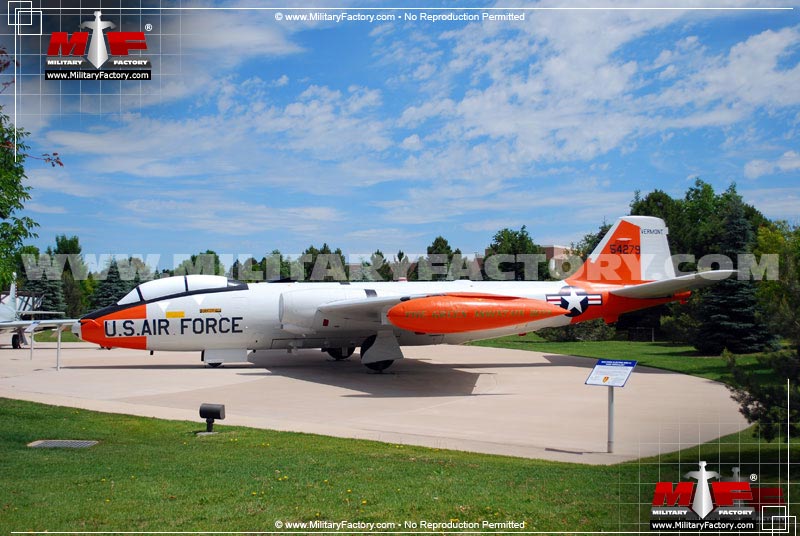 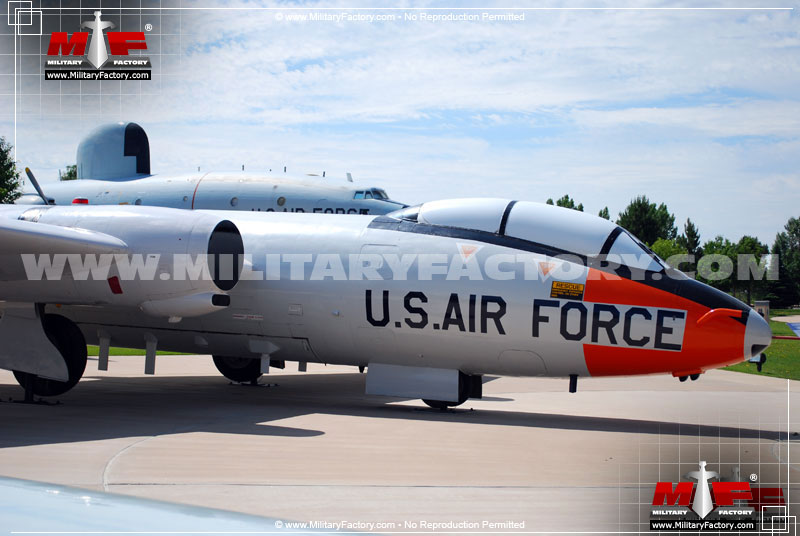 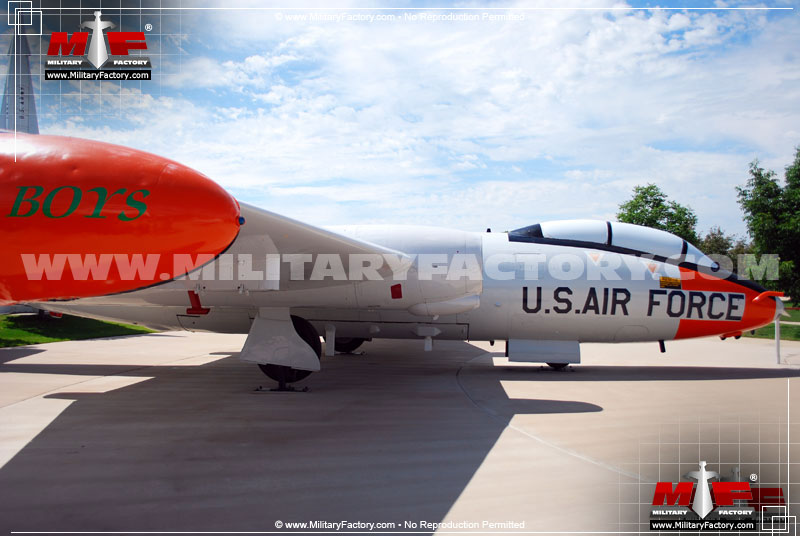 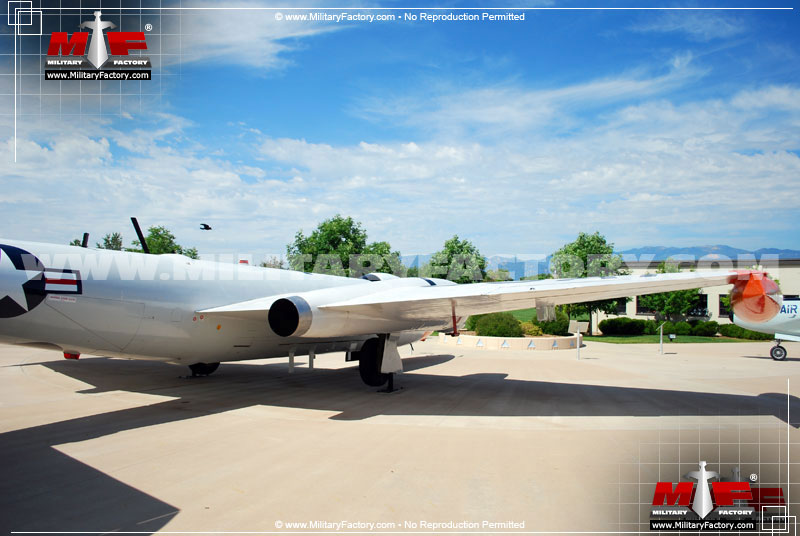 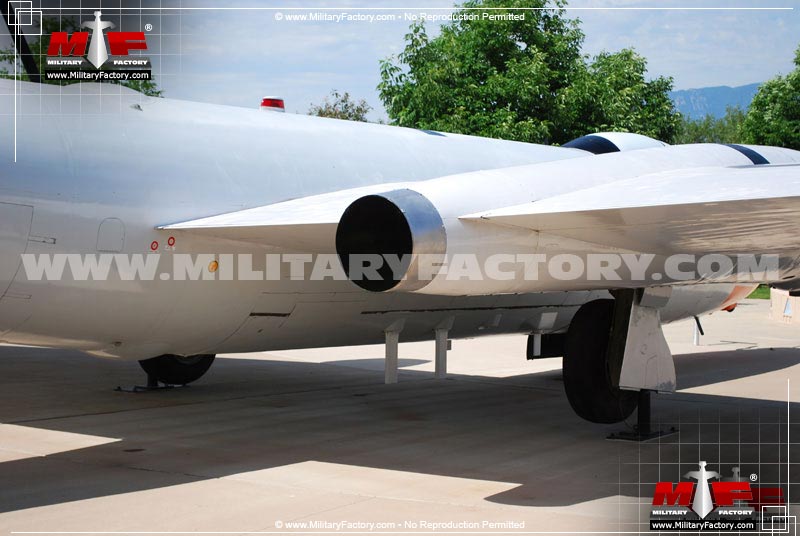 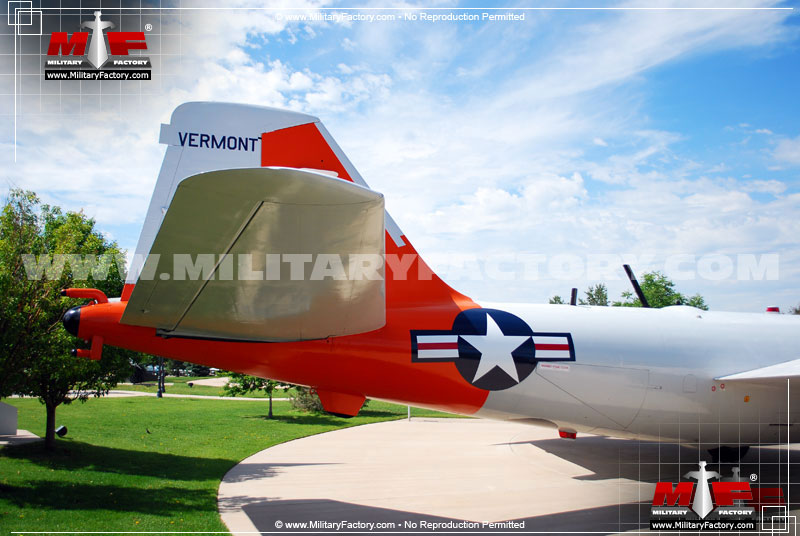 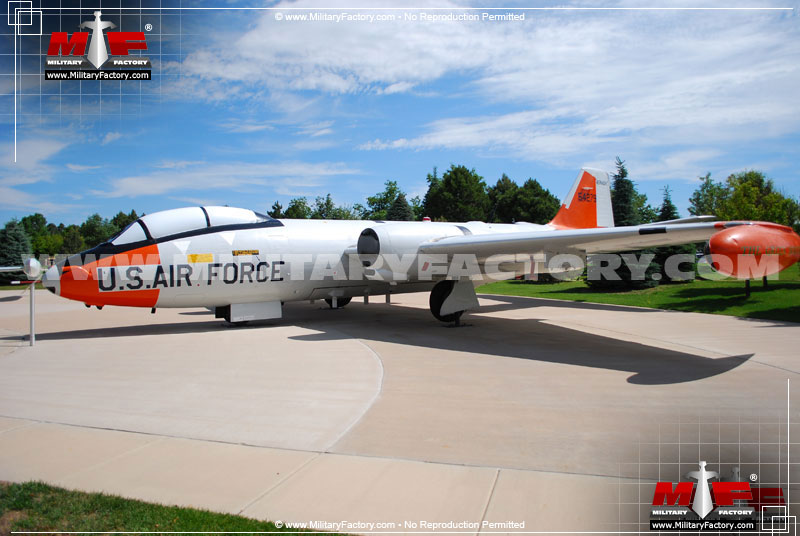 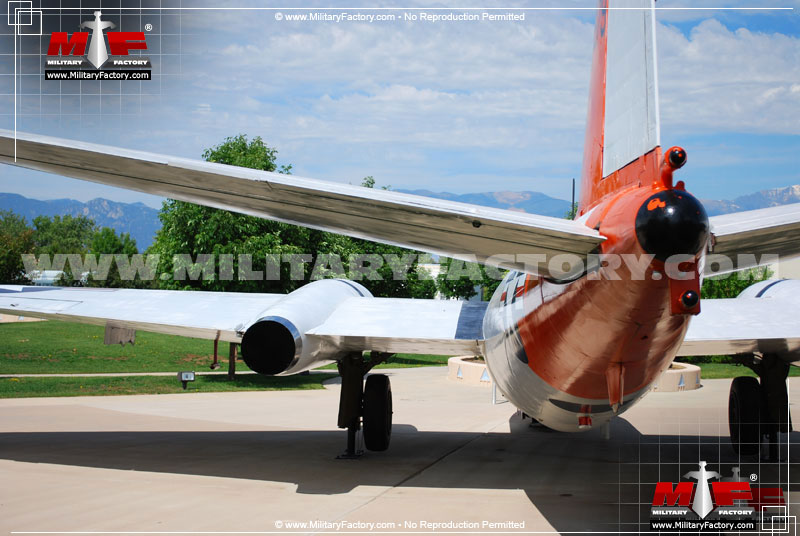 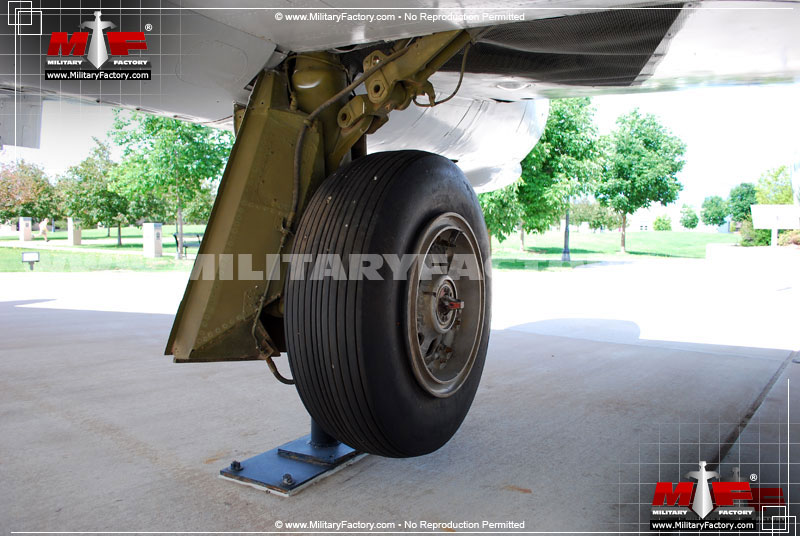 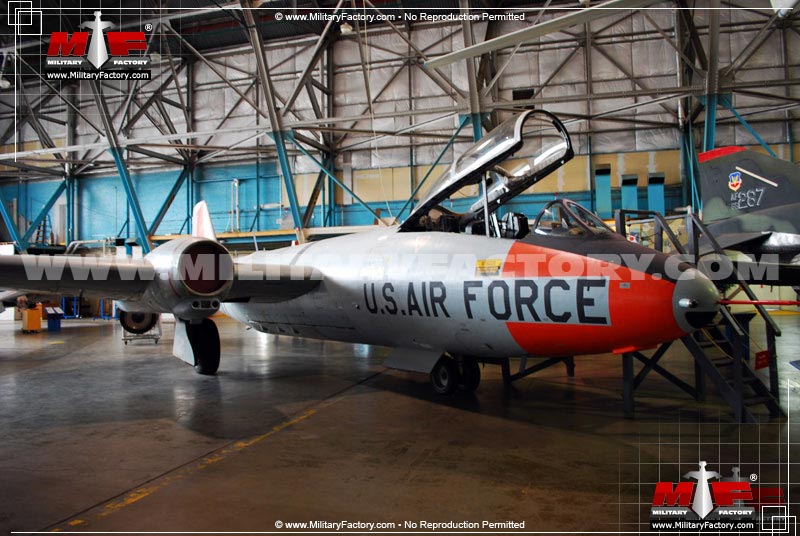 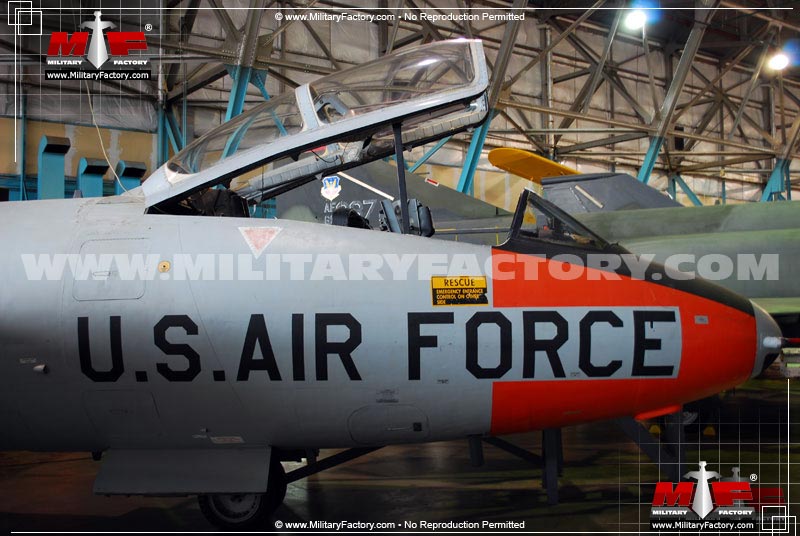 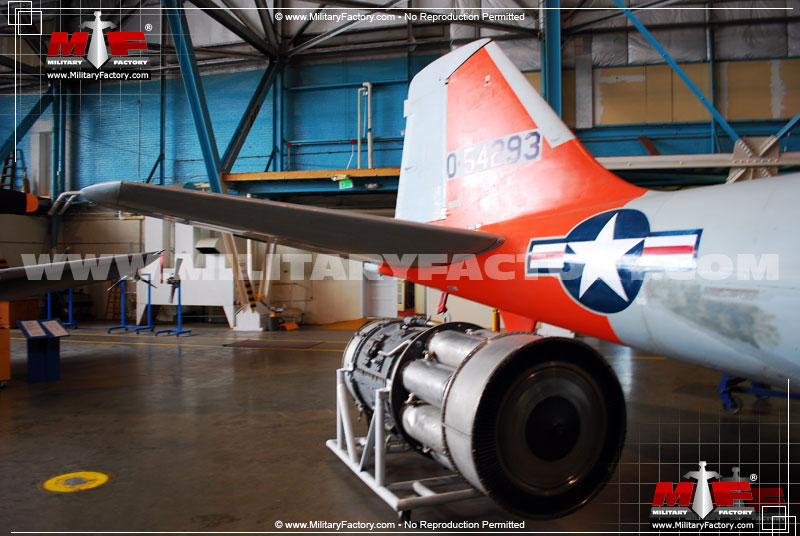 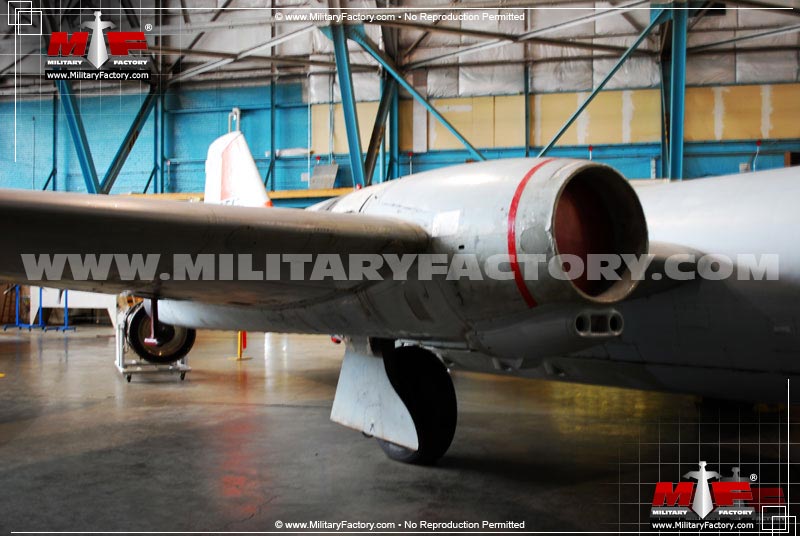 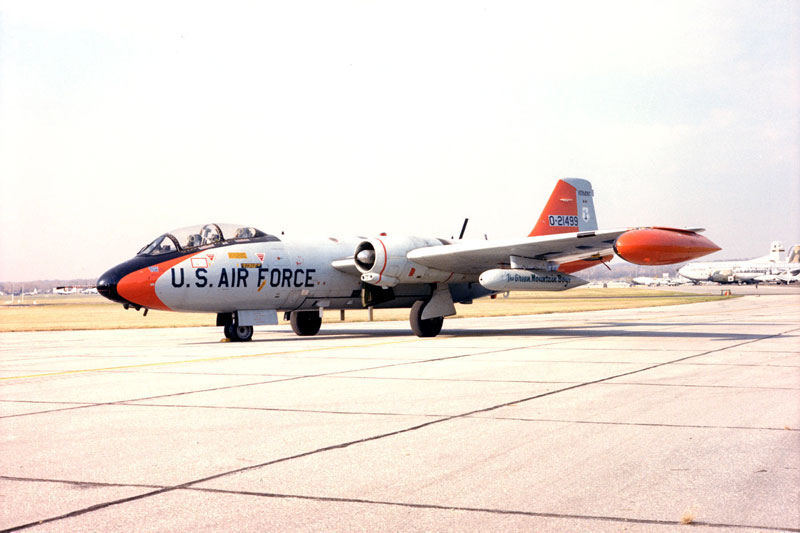 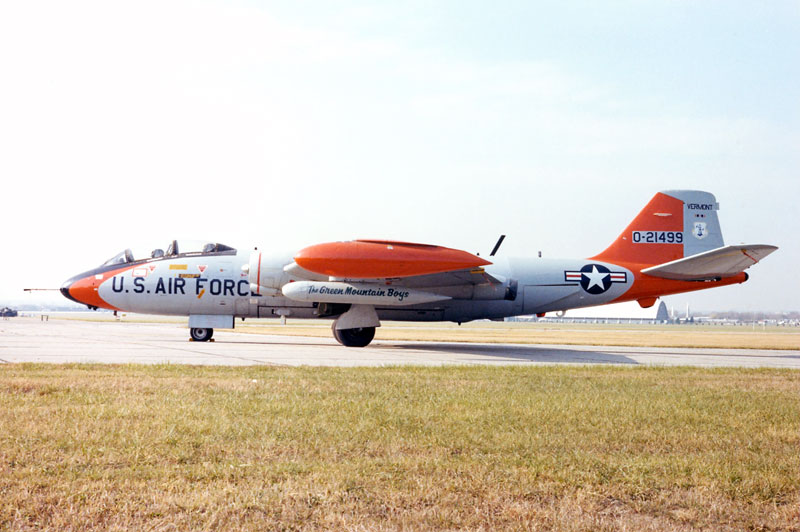