The Berthier Rifle line saw an amazing service run from 1890 to the 1960s with over 2 million guns produced.

Authored By: Staff Writer | Last Edited: 04/20/2019 | Content ©www.MilitaryFactory.com | The following text is exclusive to this site. 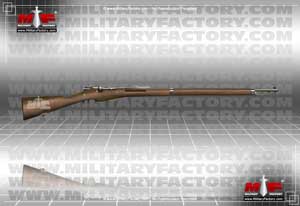 The bolt-action 8mm Model 1886 "Lebel" rifle was a French Army standard when introduced and proved a revolutionary offering in firing a smokeless cartridge with small-caliber jacketed bullet from an eight-round tube magazine. However, advancements in technology quickly pushed the Lebel to its limits and it quickly began to feel obsolete in an ocean of all-new, more capable designs being introduced elsewhere. Regardless, nearly 3.5 million of the rifles were produced from 1887 to 1920 with many seeing combat service even into World War 2 (1939-1945).

The design-by-committee approach was never a good option for military weapons and this proved the case with the Lebel. While the new French rifle was getting its bearings within the French Army inventory, French railway engineer Adolphe Berthier of Algeria began private work on an all-new bolt-action service rifle for possible Army consideration. The drive was to counter the recent adoptions of neighboring Germany and Austria-Hungary of new Mauser and Mannlicher (respectively) rifles that quickly outmoded the new French Lebel. This work then begat a product known as the "Berthier Rifle" which retained the same 8x50mmR Lebel Mle 86 cartridge through an action more aligned to the Mannlicher rifle line. However, the weapon fired from only a three-round integral magazine unlike the Lebel's 8-round tube. The action was of the typical manually-actuated bolt arrangement requiring operator involvement and a unique "reverse clip" approach was used in the Mannlicher-inspired magazine design.

At its core, the Berthier Rifle was constructed with a one-piece wooden stock in the traditional way with all metal parts laid within this frame. The shoulder stock was integrated as part of the frame as was the grip handle - this of a straight-wrist approach. A single barrel band connected the barrel to the stock. The trigger and its oblong ring were held under the action in a typical format. The knobbed bolt handle sat over the right side of the gun and jutted out at a 90-degree angle. Iron sights were fitted over the middle of the gun's length and at the muzzle. Under the muzzle lay a bayonet mounting feature (not on all variants however).

The rifle was presented to French authorities and trials were ordered to test the validity of the design. However, the Berthier held much against it, the least of these being the now-firmly entrenched Lebel was not going anywhere any time soon. As such, French Army personnel were not convinced that the Berthier offered many more advantages that the Lebel already had. One of the key sticking points against it was its short 3-round magazine which was a drastic reduction from the Lebel's eight-round capacity. It was deemed that infantrymen with more ammunition at-the-ready were much better prepared to engage an equal or lesser foe at range.

The Berthier design held some qualities about it that were eventually revisited. The tube magazine of the Lebel meant that the rifle could never be realistically shortened to fulfill the cavalry carbine or engineer's rifle role as the tube was a fixed and integral component of the gun. The Berthier, however, held no such permanent fixture and could be made into whatever shortened variant was required by the Army. Additionally the tube magazine laid its cartridges in a nose-to-tail arrangement, each cartridge behind the other. A sharp force to the buttstock could easily set off one cartridge leading to the others igniting in turn - a lethality to the unsuspecting infantryman.
Advertisements

Nevertheless, the Berthier was initially passed on until the limitations of the long Lebel form were rediscovered. This prompted a Berthier Rifle to be reworked by engineers at the Puteaux Arsenal for the cavalry carbine role during 1890, this becoming the "Modele 1890 Berthier". The gun was given a turned-down bolt handle and sling rings and lacked the handguard and bayonet mounting. Overall length was 945mm with a weight of 3kg.

The full-length rifle guns followed and issuance was to colonial troops of the French Empire. Specialized marksmen variants were later developed and these given to sniper elements in Indochina and Senegal as the "Modele 1902 Rifle, Indochina" and the "Modele 1907 Rifle, Senegal" respectively. From 1901 onwards, a new cartridge type (the mle 86 "D") forced the guns to have their sights regraduated.

In practice, Berthier Rifles were found to be strong, somewhat heavy, guns but accurate and reliable. Despite these qualities, the Lebel remained the standard French service rifle heading into World War 1 (1914-1918) while the Berthier saw life as a supplemental service gun for select forces. Limitations of the Lebel design did not go unnoticed for the Modele 1907 Rifle, Senegal formed the basis for a frontline service rifle variant for the French Army - this as the "Modele 1907/15". Production of this mark was from both French and American factories (Remington Arms).

By this time, the limitation of the Berthier's three-round magazine against the German 5-round Mauser rifles became too much to bear. Even the hated British used Enfield rifles with an 8-round magazine store and the Americans centered on the M1903 Springfield with its 5-round capacity. Come 1916, the Modele 1915 was evolved to become the new "Modele 1916" which introduced with a five-round magazine while all other functions of the gun remained faithful to earlier marks. A carbine version with five-round clip support emerged as the "Modele 1916 Short Rifle".

In the post-war years, earlier models were refurbished to take advantage of the new magazine design producing the "Modele 1892/27 Short Rifle" designation of 1927. These lacked an over-barrel handguard section of wood. The Modele 1916 Short Rifle carbines became the "Modele 1916/27" after the changes to the new standard.

Berthier guns held a tenure that went throughout the interwar years and it was not until 1934 that the rifle underwent its final notable alteration: a rechambering to the 7.5x54mm Mle 29 cartridge. The magazines were appropriately revised for the new rounds and the original Mannlicher approach was dropped in favor of a staggered Mauser charger-stripping system. The new guns were marked as "Modele 1934" and continued in service throughout World War 2 (1939-1945) and into the 1950s and 1960s before being given up for good. The carbine model became the "Modele 1934 Cavalry Carbine".

Berthier Rifle production surpassed and amazing 2 million guns by the end of it all - a hefty total for a rifle not considered for standardization in frontline duty by a world military power like France.
Advertisements

*May not represent an exhuastive list; calibers are model-specific dependent, always consult official manufacturer sources.
**Graphics not to actual size; not all cartridges may be represented visually; graphics intended for general reference only.
Rate-of-Fire
20
rds/min
Muzzle Velocity
2,350 ft/sec
(716 m/sec) 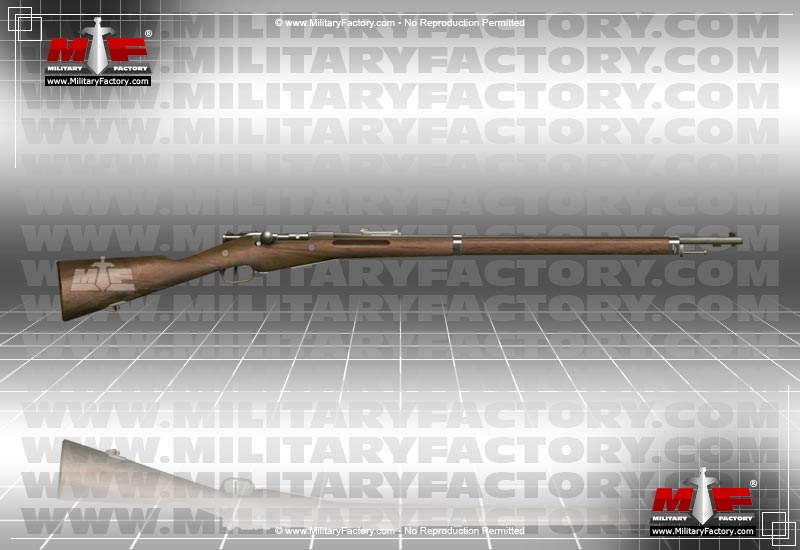