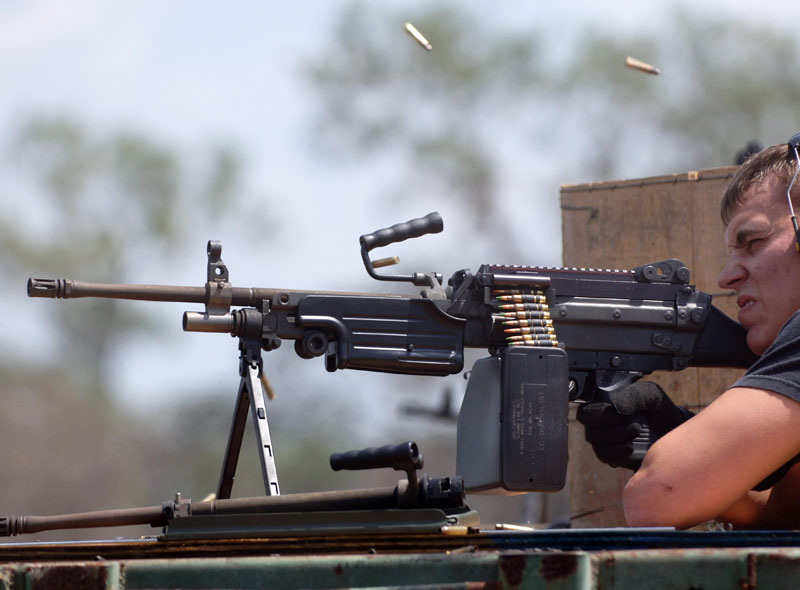 Left side view of the M249 SAW; note magazine box and feed as well as bipod and carrying handle
2 / 8 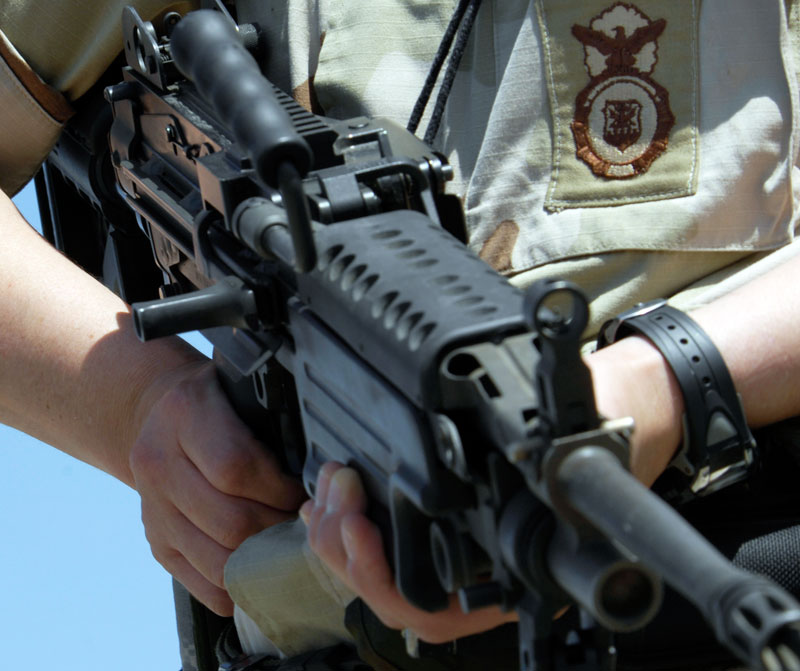 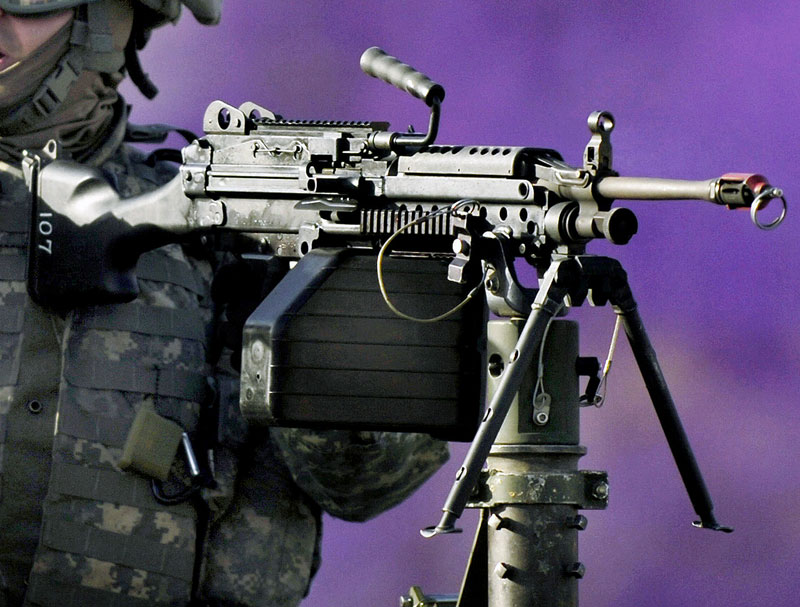 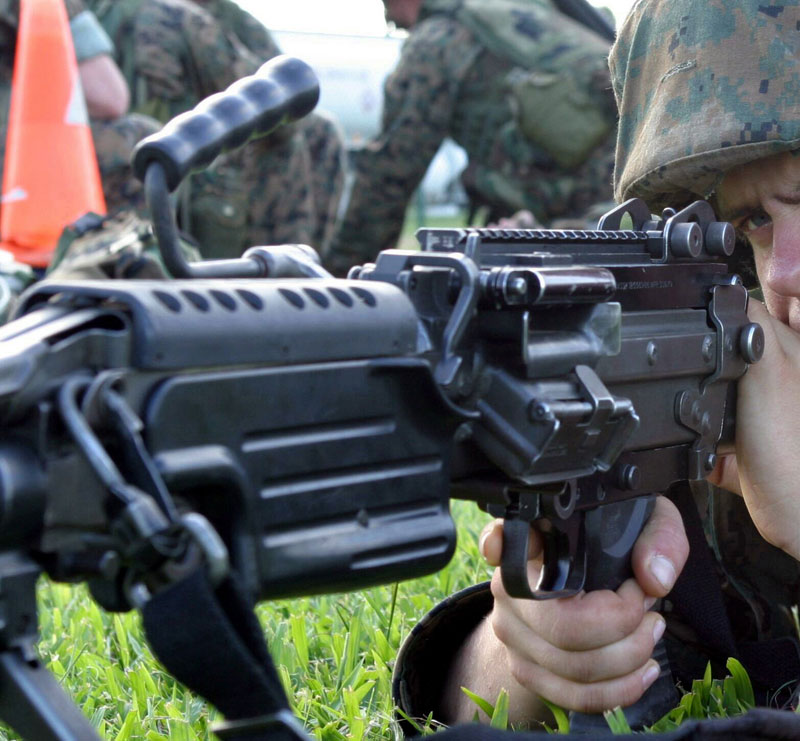 Close-up detail view of the left side of an M249 SAW; note belt feed mechanism
5 / 8 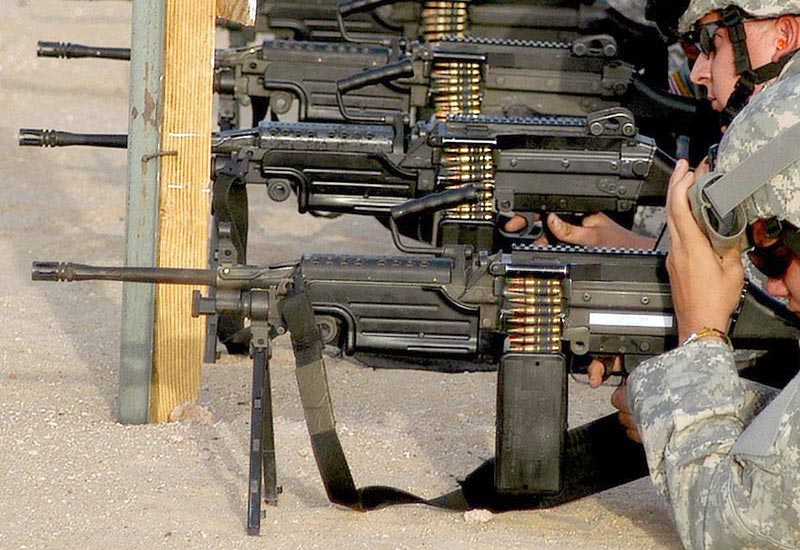 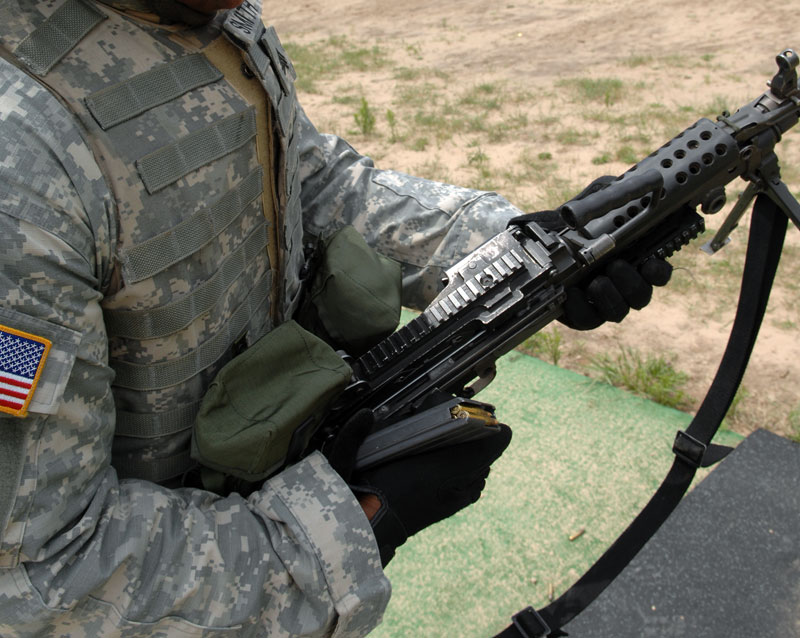 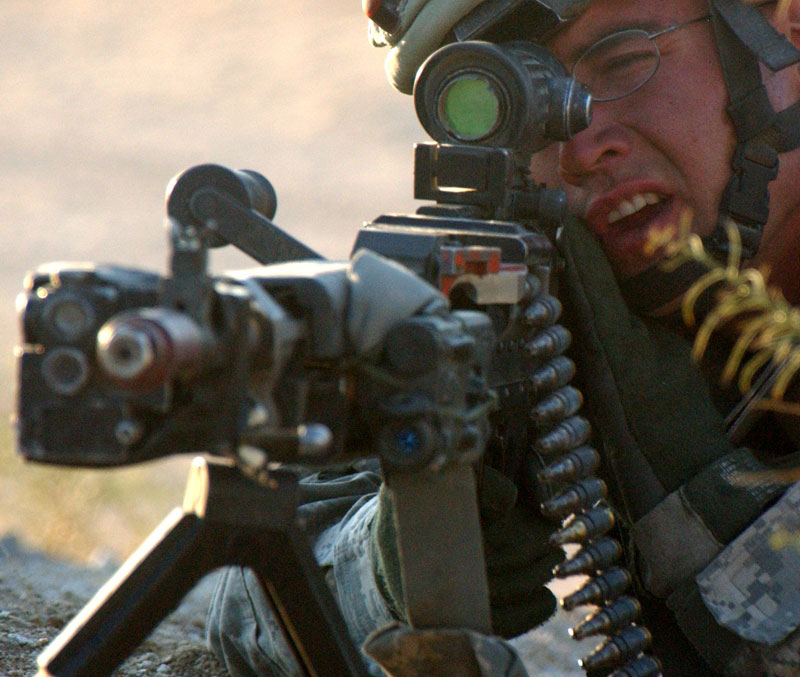 Close-up detail view of the business end of an M249 SAW; note scope and wargames attachment
8 / 8 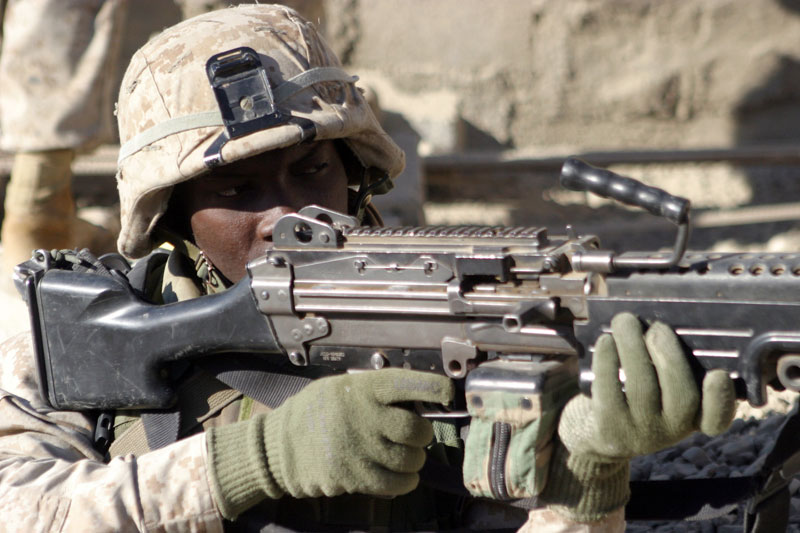 Right side detail view of an M249 SAW; soldier firing from the shoulder

The M-249 is a light machine gun based off of the Belgium Fabrique Nationale FN Minimi system.

When the United States Army moved to adopt a new light machine gun, it selected the excellent Belgian Fabrique Nationale FN Minimi as the "M249 SAW" ("Squad Automatic Weapon"). The M249 became more or less a direct adaptation of the Belgian design with a few Army-requested changes to suit mission needs and American production methodology. The weapon was selected in 1982, introduced with the US Army in 1984 (the US Marines accepted the weapon in 1985) and, after an extensive period of testing common to most US military firearms, the M249 was finally delivered to frontline US Army forces in 1992. By and large, the M249 remains faithful to the overall form and function of the FN Minimi with the most notable change being the addition of a perforated heat shield at the barrel and a new butt. The heat shield protects the operator from accidental burns and also serves to minimize the effects of heat distorting the action as seen through the sights.

Like other modern infantry forces, the US military survives through various levels of specialists that benefit the whole. Base infantryman armed with their standard service rifles head the assault and these forces are supported by specialist troops armed with larger, heavier automatic weapons for suppression fire and direct contact of enemy forces. The M249 fulfills this role as a portable, voluminous fire design intended to support infantry actions at the squad level.

The US move to a more compact machine gun was born from a 1960s initiative which saw American ground forces tied to the cumbersome, rifle-caliber-chambered M60 General Purpose Machine Gun (GPMG) of the Vietnam War era and the Browning M2HB heavy machine gun system. As such, there proved a "bridge requirement" to bring about a more portable system chambered for the smaller 5.56mm NATO round via belt. The weapon would be crewed by a single operator for efficient management in the field and provide the needed sustained fire through a high-volume automatic action. While various experiments were conducted in the Vietnam War to find such a weapon, the solution would not come until well after the war in the 1980s with the settlement of the Belgian FN Minimi. The Minimi was successfully evaluated (as the XM249) beginning in 1974 against the Colt M16 HBAR and the Heckler & Koch HK23A1. Testing continued into 1981.

The M249 retains the general appearance and layout of the FN Minimi before it. The receiver is a large, rectangular block housing the required internal components. The stock is a webbed, twin strutted assembly affixed to the rear of the receiver in the usual way. The trigger group and pistol grip are underslung beneath the receiver. Ahead of the receiver is the forend/handguard shrouding a portion of the barrel and gas cylinder. A folding bipod assembly is fitted at the gas cylinder and collapses rearwards against it when not used. The barrel protrudes a short distance ahead of the forend and is capped by a conical slotted flash hider. Iron sights are provided over the receiver and midway along the barrel. A carrying handle is offset to the right side to facilitate transport and barrel changing. Ammunition is fed through a port along the left side (box or belt) and exits from the right. Sling loops allow use of a shoulder strap. The M249 can also be supported via the M192 LGM tripod assembly.
Advertisements

The M249 features a running length of 41 inches with an unloaded weight of 16lbs. The barrel measures 18 to 20.5 inches long and is rifled with 6-grooves and a right-hand twist. The weapon is chambered for the 5.56x45mm NATO standard cartridge - the same as used in the M16 series of assault rifles and M4 Carbines - and can fire from a 30-round detachable box hard magazine (STANAG) or a 200-round M27 series metal linked belt in a soft case. The M249 can, therefore, actually be fed by way of the M16/M4 magazine. Cyclic rate-of-fire is 750 rounds per minute with a muzzle velocity of 3,000 feet per second at effective ranges out to 870 yards and a maximum range out to 3,900 yards. The firing action is of gas-operation through an open bolt arrangement. A typical SAW man is afforded 2 x 200-round 5.56mm belts.

The M249 received its baptism of fire in the 1989 US invasion of Panama to unseat dictator Manuel Noriega. It then was pressed into action once more in larger numbers during the 1991 Gulf War. From then on, the weapon has seen consistent service through the Bosnian and Kosovo wars, the 2001 US-led invasion of Afghanistan and the 2003 US-led invasion of Iraq. In service, the M249 has given good results as a reliable, high-volume fire weapon. It excelled when used as a stationary weapon though with slightly poorer results when operated from the shoulder. In particular, the M249 proved prone to capturing dirt and sand and this went on to become the weapon's major complaint by users. A collapsible butt was eventually issued for a more compact profile and recognized as the "Para" version for its airborne paratrooper intention. The M249 has become a stable of American urban warfare engagements in Iraq.

Production of American M249s is handled by FN Manufacturing Company of Columbia, South Carolina, USA. The initial batch of 1,100 M249s were built and delivered directly from Belgian factories and were marked as such. Since entering service as the "M249 SAW", the system has been redesignated in 1994 to "M249 Light Machine Gun (LMG)".

The M249 has been manufactured or modified into several notable forms beyond the first generation base M249. The M249 PIP was an early Product Improvement Program form with a plastic stock replacing the original metal one. New sights were also added as was a new pistol grip, bipod and flash suppressor. Picatinny rail sections were eventually installed. The M249 PARA is a more compact version with sliding butt. The M249 Special Purpose Weapon is a compact SOCOM series version with weight reduction taken to the extreme - lacking the carrying handle, magazine well and vehicle mounting hardware. Another SOCOM type is the Mk 46 Mod 0 with Picatinny rail support and varying barrel options. The Mk 48 is yet another SOCOM breed following the Mk 46 Mod 0 though chambered for the larger rifle-caliber 7.62x51mm NATO standard cartridge.

It is noteworthy that the FN Minimi has been adopted by many major modern world forces including Australia, Brazil, Canada, France, Indonesia, Italy, Japan, Malaysia, Mexico, Pakistan, Philippines, Poland, Spain, Sweden, Taiwan, Thailand, Turkey and the United Kingdom (among others).