The Colt-Browning M1895 - the Potato Digger - mated the movement of a lever-action rifle with gas-operated power to produce a new type of air-cooled machine gun.

Authored By: Staff Writer | Last Edited: 05/10/2019 | Content ©www.MilitaryFactory.com | The following text is exclusive to this site. 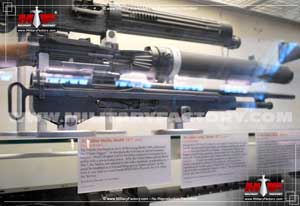 Convinced of the inherent value of machine guns based on experiences in the Spanish American War of 1898 (and not wholly sold on the lumbering Gatling), the United States government moved on acquiring more of the weapons into the existing inventory. After trials, the choice fell to the Maxim water-cooled machine gun in .30 caliber, the first 282 examples purchased directly from Britain with the remaining stock to be strengthened through local production. Despite the selection, the US also, rather informally, took on a John Browning machine gun design that was manufactured and sold under the Colt banner as the Model 1895 (or "M1895"). This weapon was also tested in .30 caliber form though existed as a gas-operated, air-cooled design.

The M1895 held origins in an 1889 Browning patent. Browning had partnered with Colt for some of his products that included shotguns and lever-action rifles. The lever action was ingenious for its time, requiring the user to manually-actuate a hinged lever handle to extract a spent cartridge case and introduce a fresh ready-to-fire cartridge into the chamber. Coupled with a tube magazine mounted either under the barrel or within the stock of the weapon, the user benefitted through a repeat-fire action that no other weapon of the period managed. Such actions were at the heart of the successful run of Winchester rifles of the mid-to-late 1800s.

Browning considered this action along with a gas-operated system. Gas pressure generated by ignited cartridges could be pulled from the barrel (behind the exiting bullet) through a small opening leading into a cylinder. This force could provide an "automatic" mechanical action which drove a lever-action type arm. The arm was situated under the barrel and was sent rearwards into the receiver by the collected gas pressure - the resultant action used to open the breech of the gun, extracting the spent shell casing and set a fresh cartridge into the chamber in one fell swoop. The speed of the action was such that a useful, sustained rate-of-fire could be achieved. However, the movement of the arm required some eight inches of clearance at the underside of the weapon, lest the gun dig itself into the dirt. It was this action that gave rise to the weapon's popular nickname of "Potato Digger".

Overall, the M1895 was a rather conventional-looking weapon for the period with a slab-sided, seemingly featureless, receiver housing the required internal working components, gas cylinder and a large portion of the barrel. The operator managed the weapon through a fixed, ergonomically-shaped pistol handle at the rear of the receiver, the grip within relatively easy reach of the trigger pull unit. Sighting was through integrated iron assemblies for some accurized ranged fire. The weapon was mounted a heavy-duty adjustable tripod due to its operating weight.

In practice, M1895s were noted for their nicely contained recoil and practical rate-of-fire due, the latter listed at 600 rounds per minute. Muzzle velocity equaled 2,800 feet per second and feeding was by way of a 240-round fabric belt. The unique action of the gun promoted reliability in the design as each round was extracted and the next one set in a clear motion. The weapon was first procured by the United States Navy in over 200 examples (as the "Mark 1") though in 6mm chambering and it was then exported to interested global parties such as Spain (in 7x57mm caliber) and Italy (in 6.5x52mm caliber). The weapon was also taken on by the United States Marine Corps which pressed them into combat service during the 1898 invasion of Guantanamo Bay. The United States Army followed and fielded their M1895 machine guns in both .30-40 Krag and .30-06 Springfield chamberings though these examples were primarily relegated to training endeavors. Following the 1906 standardization of the .30-06 Springfield cartridge (M1906), the M1895 was itself standardized to accept the new round through a branches-wide conversion program.
Advertisements

The M1895 was being quickly outpaced in the lead-up to World War 1 (1914-1918) and was generally seen as obsolete by the time war arrived in Europe during the summer of 1914. The weapon was modernized by the Canadians in 1915 to produce the M1915 variant. This model added cooling fins to counter barrel overheating and a new, lighter-weight tripod was developed for increased portability. Engineers also designed a new cable-based cocking system which allowed for charging of the weapon at its rear. The M1915 was used by Canadian and Imperial Russian forces in World War 1 and was adopted (as the M1917) by the US Army. The United States entered the conflict in 1917 and ended up procuring some 4,800 M1915 guns in all with about 1,500 being delivered to the Navy. Marlin Arms Company was given a production charge (reformed as "Marlin-Rockwell" in 1916) for the M1915. Canadian use of the M1915 was eventually given up in favor of the more popular Vickers water-cooled machine gun by war's end, though reports from the Front concerning the Browning design generally found it a good and reliable platform.

In 1916, the United States Navy headed a revised M1895 variant through the Model 1916, this intended as an aircraft machine gun and produced by Marlin. The variant incorporated an all-new, straight-line piston apparatus instead of the original's complicated lever arm action. The internals appropriately required revision to accommodate the new action though the weapon remained largely faithful to the original offering - some of its components being compatible with the earlier mark. It also proved a vastly lighter weapon than the original Colt-Browning offering and served well in the aircraft machine gun role where it could be successfully synchronized to fire through the spinning propeller blades.

Following the Model of 1916 was the Model 1917 (also by Marlin), another aircraft-mounted variant to be coupled to a synchronizer. This version introduced an all-new hydropneumatic action over the straight-line piston arrangement and production peaked at around 13,230 units. The first guns were seen in July of 1917.

In June of 1918, the M1917 was modified further, though now intended for use as a vehicle/tank machine gun. An aluminum radiator was added for maximum cooling (weight was not as high of a concern for vehicle-mounted guns) and a pistol grip was integrated into the design. This variant arrived rather late in the war for the Armistice was officially signed in November to end the conflict. By this time, only 428 M1918 examples were completed though manufacture of the mark continued into 1919 to which a further 2,580 units were added into circulation. A light machine gun form, intended for the platoon level as a support fire weapon, was entertained but not exercised.

Concerning all variants, aircraft machine gun production totaled 38,000 units with 1,470 of the vehicle/tank machine gun line. While the United States officially gave up use of Colt-Browning/Marlin machine guns during the interwar years, the British were handed stocks of the antiquated Marlins from America in 1941 when there proved a severe small arms shortage for the country during the early years of World War 2. These machine guns served as second-line weapons and often mounted aboard British merchant vessels for self-defense measures where their repeat-fire capabilities and reliable action was better than nothing. The Poles fielded M1895s in the final defense of Warsaw during the 1939 German/Soviet invasion.
Advertisements

*May not represent an exhuastive list; calibers are model-specific dependent, always consult official manufacturer sources.
**Graphics not to actual size; not all cartridges may be represented visually; graphics intended for general reference only.
Rate-of-Fire
600
rds/min
Muzzle Velocity
2,800 ft/sec
(853 m/sec) 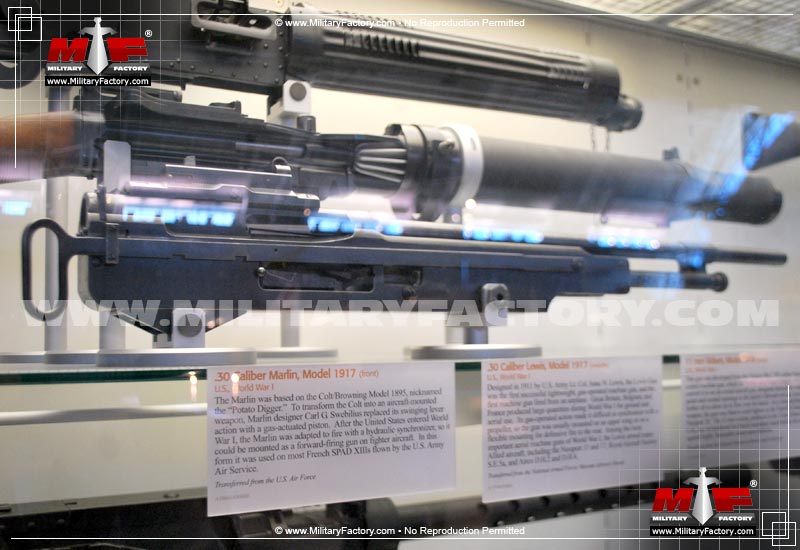 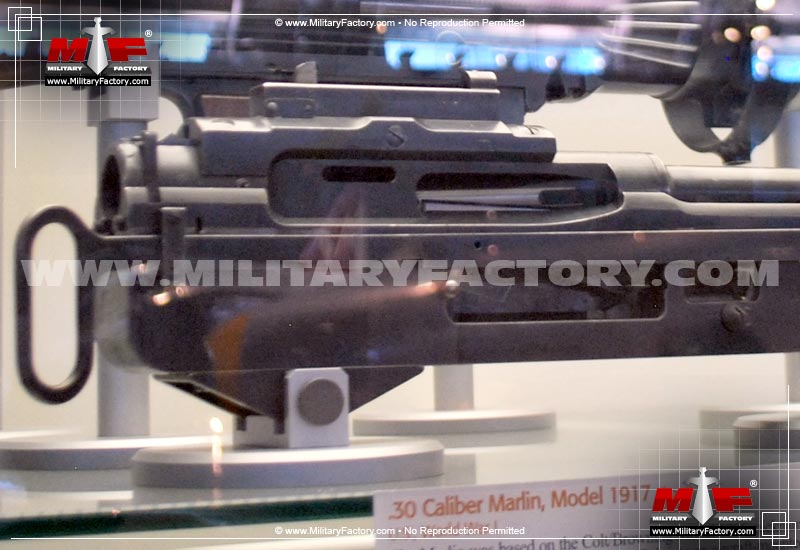 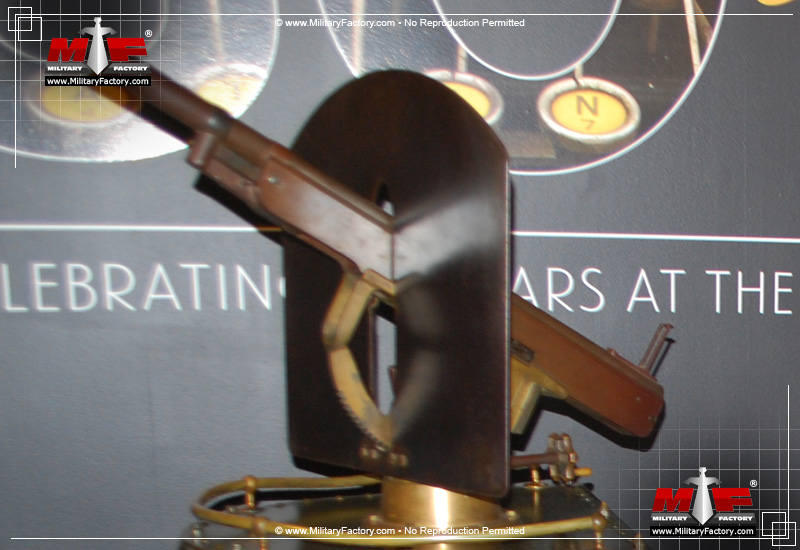 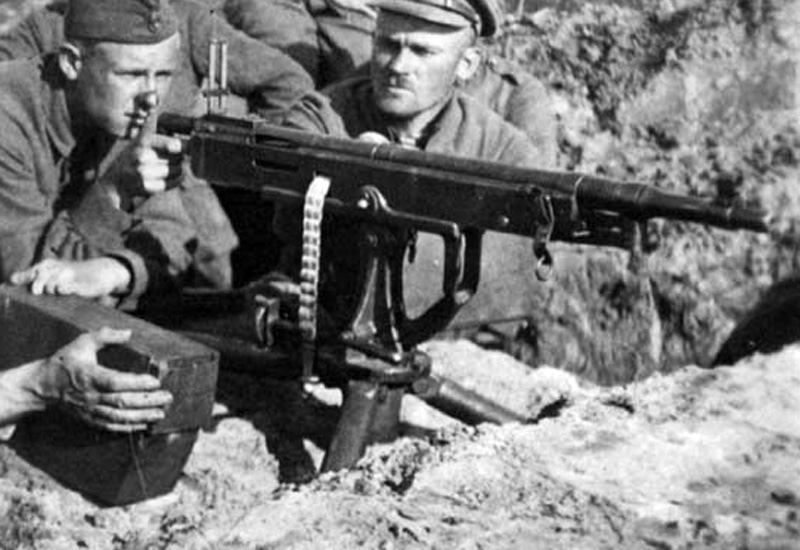 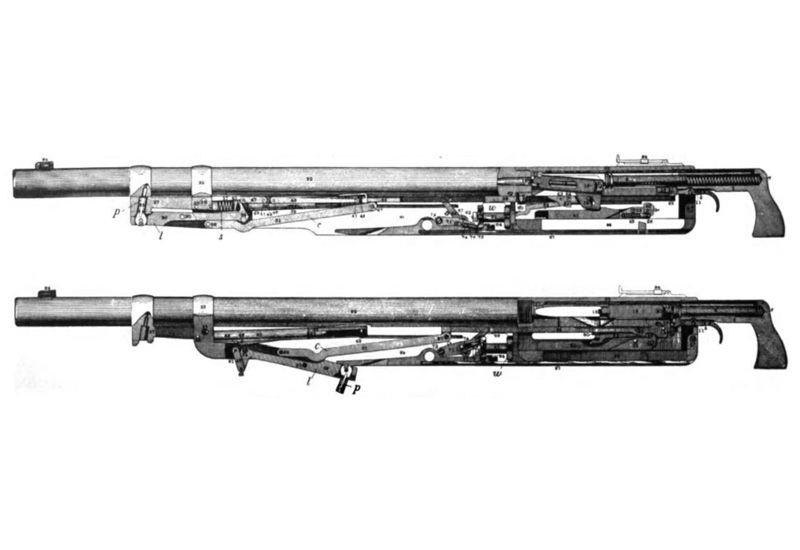 Official US government diagram showing the internal lever-action of the M1895.
❮ ❯