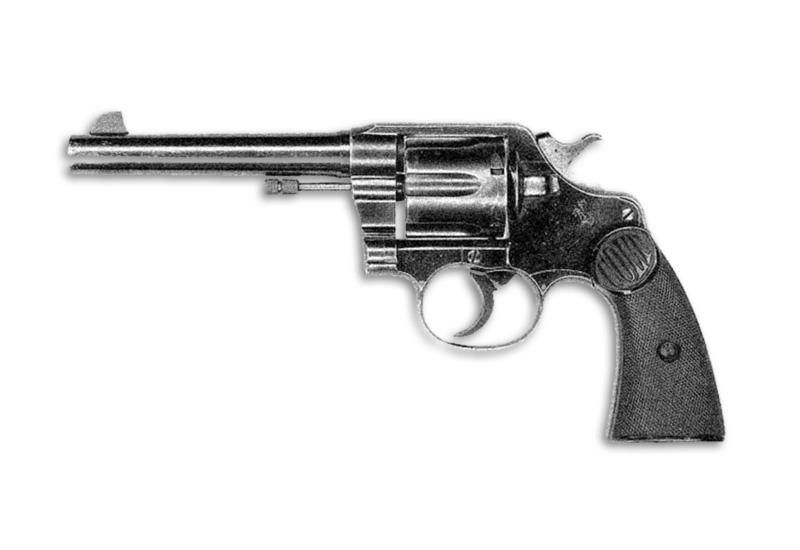 The Colt New Service existed under several notable guises and was produced to the tune of some 356,000 examples.

Authored By: Staff Writer | Last Edited: 05/22/2018 | Content ©www.MilitaryFactory.com; the following text is exclusive to this site.
In 1898, Colt Firearms unveiled a new six-shot revolver chambered for the .45 Colt cartridge as the Model 1898 - better known as the "Colt New Service". The .45 Colt cartridge was a round-nose bullet designed in 1872 with a rimmed case to which the United States Army adopted the cartridge as standard in 1873, remaining as such for nearly 20 years before being supplanted. The New Service line would end up being produced from 1898 to 1946 to the tune of over 356,000 examples by the Colt Patent Firearms Manufacturing Company. Amazingly, the New Service line managed to see operational use from 1898 into 1946, encompassing World War 1 (1914-1918) and World War 2 (1939-1945) as well as a plethora of other conflicts in between. Some also found there way onto the battlefields of the Vietnam War (1955-1975). First use of the New Service revolver was in the 1898 Spanish-American War.

Design of the New Service was quite conventional as revolvers went. A rotating cylinder was set within a solid metal frame with the hammer spur protruding from the rear of the frame to be managed by the thumb. The palm and fingers wrapped around a curved handle which was capped by wooden grips for sturdier hold. The curved trigger unit was slung under the frame in the usual way, protected by a thin, though sturdy, ring. The barrel extended out from the frame and was capped by a forward sighting post (complemented by a rear notch). Loading and unloading of the cylinder was by way of a loading arm positioned under the barrel. The cylinder was then swung out and cartridges loaded into each of the six available chambers. The revolver used a double-action system where a single pull of the trigger completed both the cocking and releasing of the hammer.

The New Service line was adopted by the United States military through the Army, Marine Corps and Navy service branches, these under the designation of "Model 1909" and retaining the .45 Colt chambering. When America committed to World War 1 in 1917, the revolver was adopted in a new .45 ACP form as the "Model 1917" - primarily due to the limited stocks of available Colt M1911 semi-automatic pistols (Smith & Wesson was also charged with production of their own Model 1917 revolver). Due to the rimless nature of the .45 ACP cartridge, the Model 1917 also supported use three-round "half-moon" clips developed to speed reloading. The clips essentially held three cartridges by their base and inserted into three of the available chambers - thusly two clips could be fitted to one cylinder for a total of six shots.

Throughout its life, the New Service saw a variety of chamberings presented beyond the original .45 Colt and subsequent .45 ACP. This included the .455 Webley, .476 Enfield, .44-40, .44 Special, ,38-40, .38 Special and .357 Magnum cartridges. Canada and the United Kingdom became notable operators of the Colt New Series and first issuance was in 1899 during the Boer War. The British recognized their New Service guns as the "Pistol, Colt, .455-inch, 5.5-inch Barrel, Mk I" when chambered for the local .455 Webley cartridge and it is notable that many officers ended up preferring their American Colts over the standard-issue Webley service revolvers then in use.

As New Service revolvers were produced in the hundreds of thousands and proved highly reliable and robust battlefield weapons (while also endearing themselves to the civilian market), it was no surprise that the type was still in circulation by the time of World War 2. Many New Service revolvers were "officially" given up after 1946 though limited stocks still persevered into the more modern "Cold War" conflicts from then on.

*May not represent an exhuastive list; calibers are model-specific dependent, always consult official manufacturer sources.
**Graphics not to actual size; not all cartridges may be represented visually; graphics intended for general reference only.
Rate-of-Fire
12
rds/min