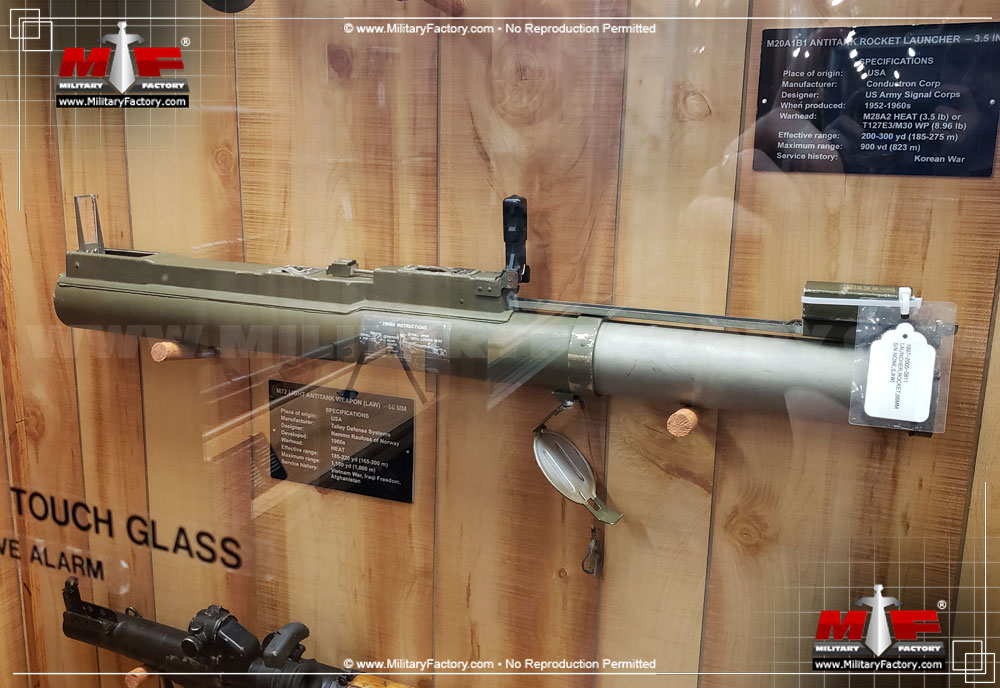 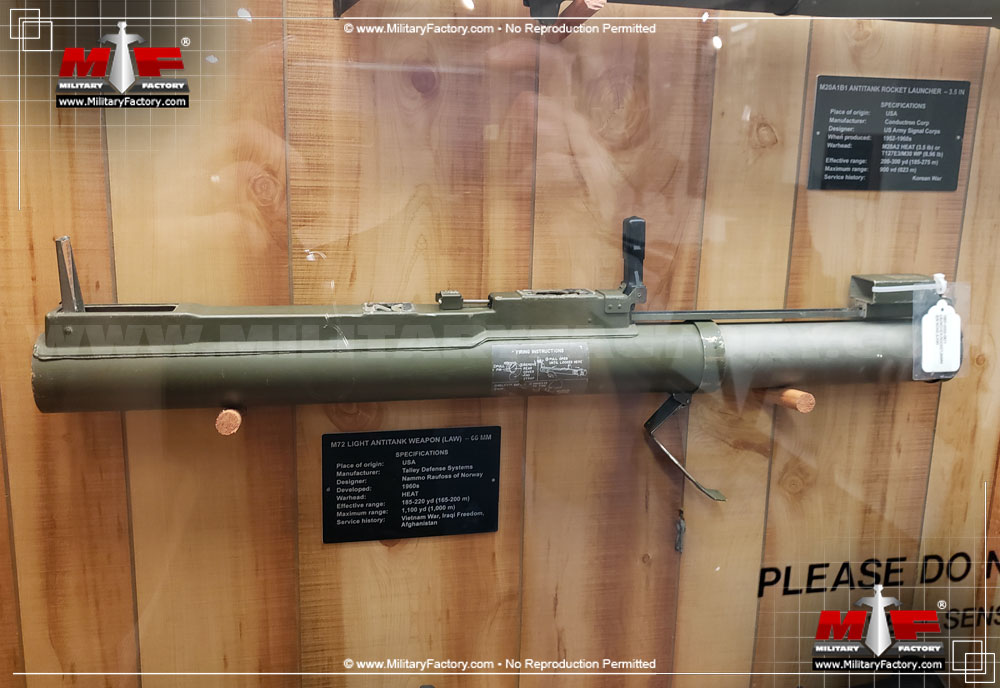 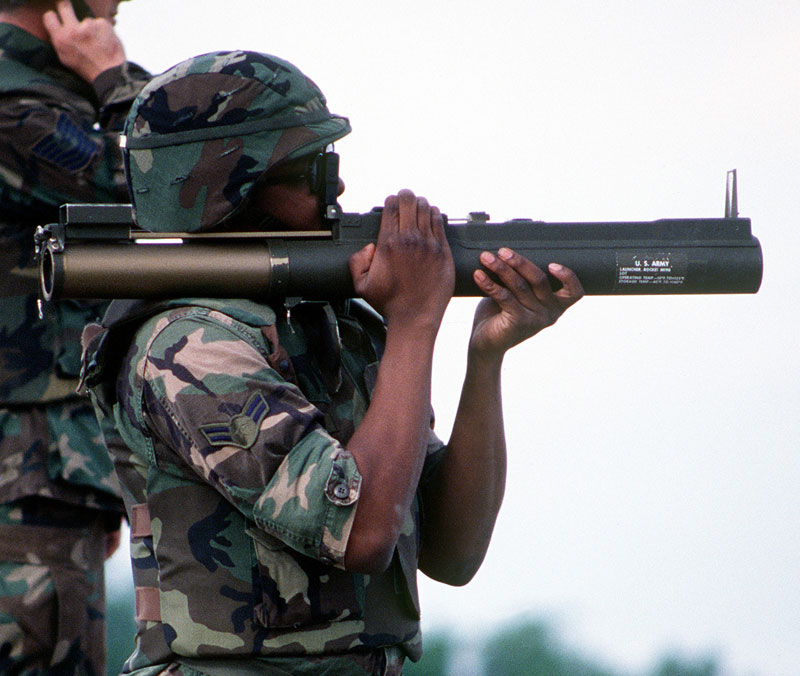 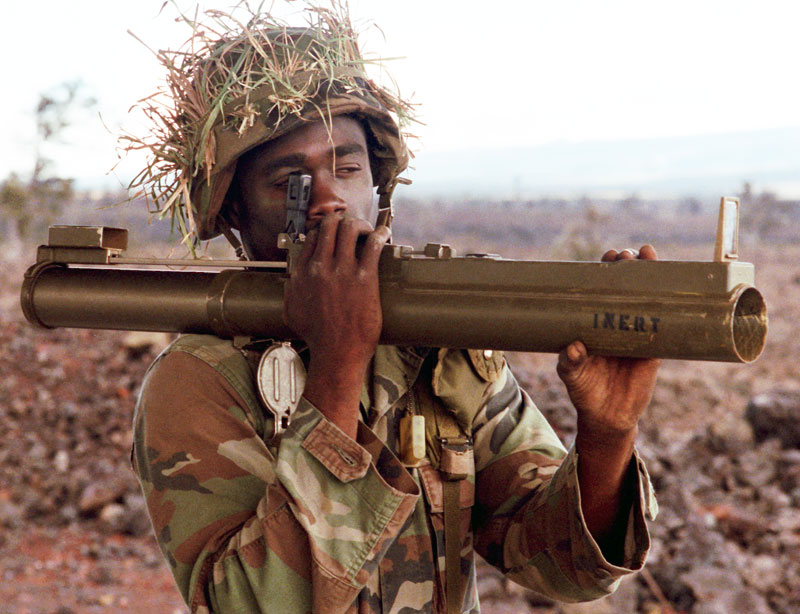 A soldier takes aim through the sights of his M72 LAW; note word INERT alongside launcher; color
5 / 15 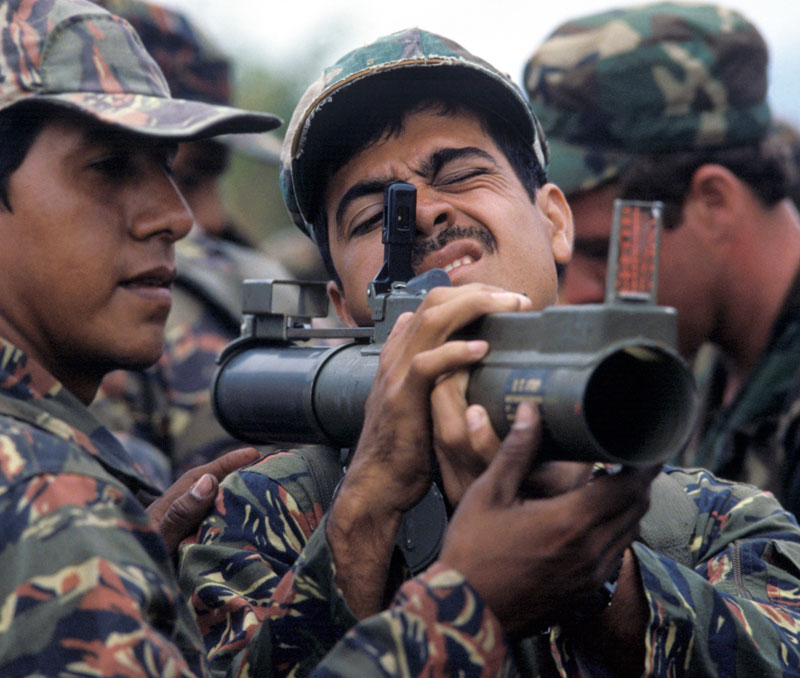 An instructor assists a student in the fine art of managing his M72 LAW; color
6 / 15 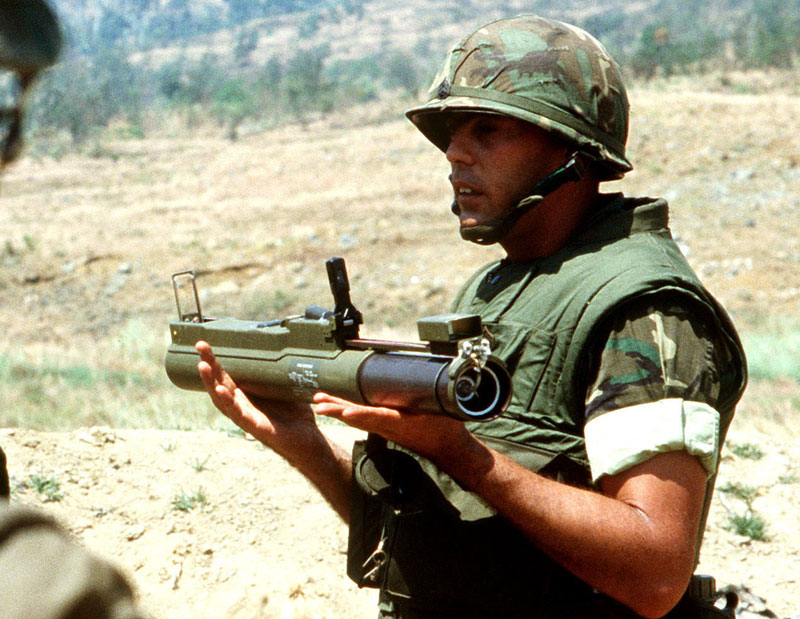 An instructor breaks down the finer points of the M72 LAW rocket launching system; color
7 / 15 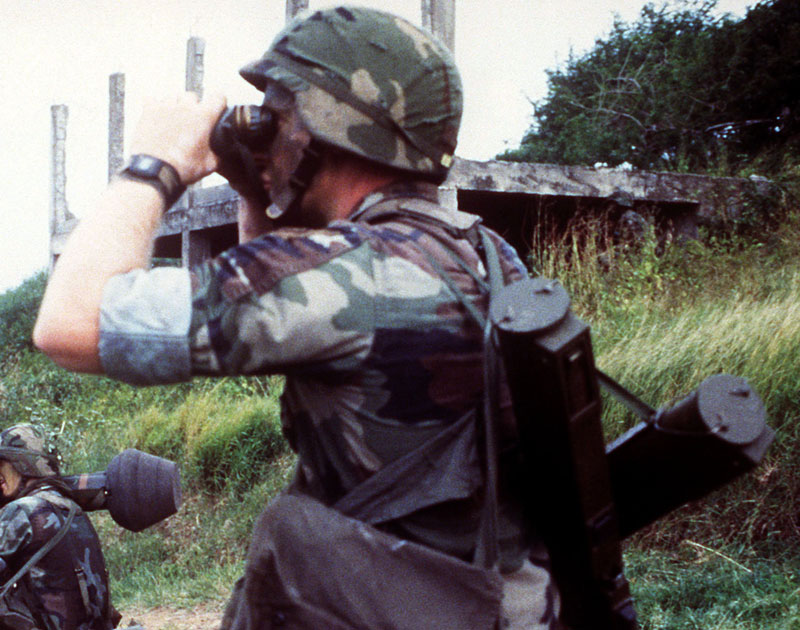 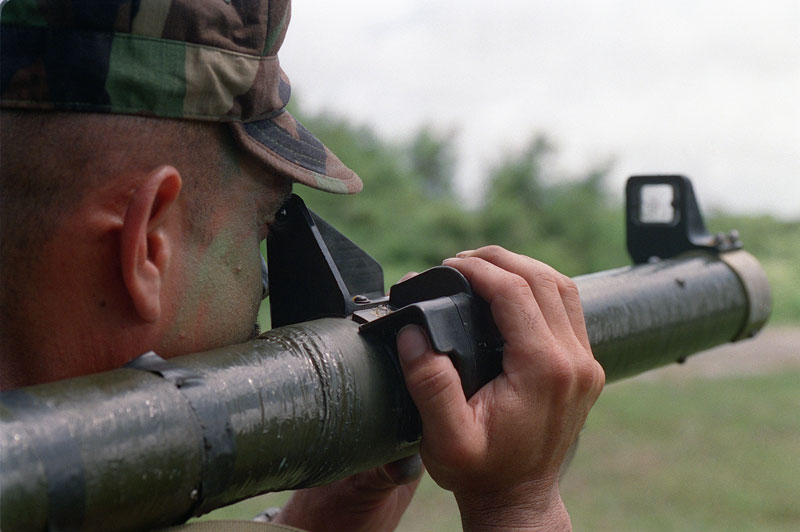 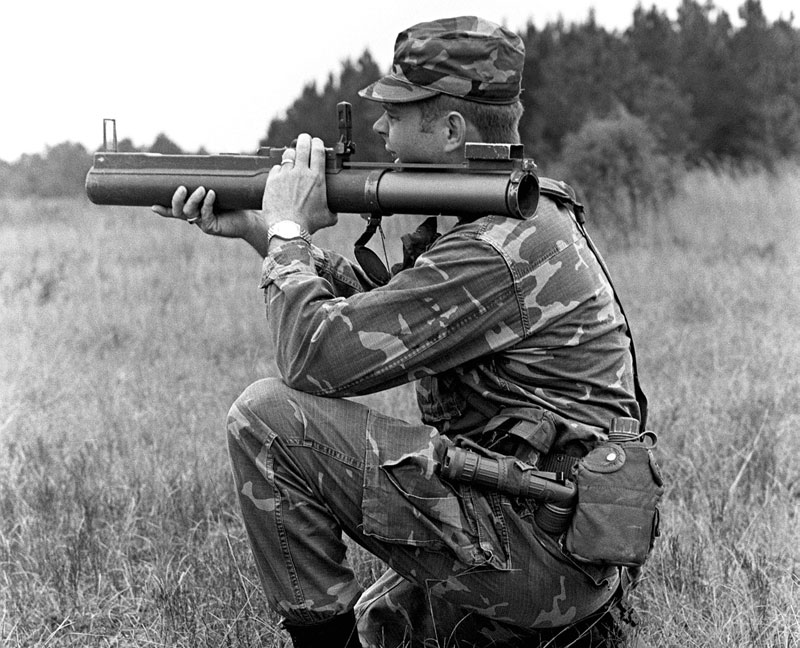 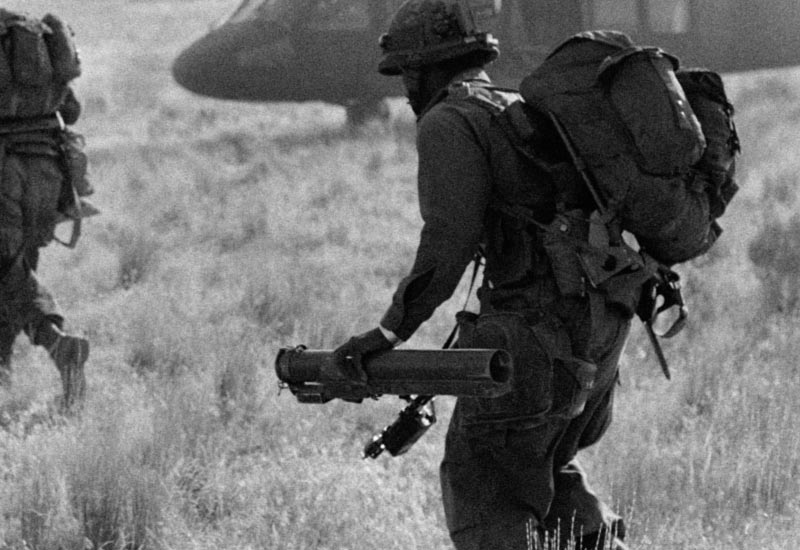 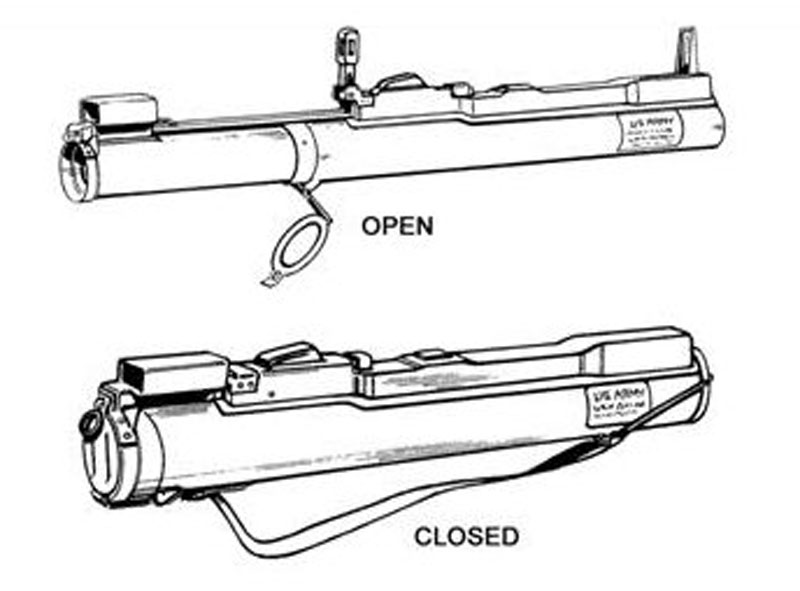 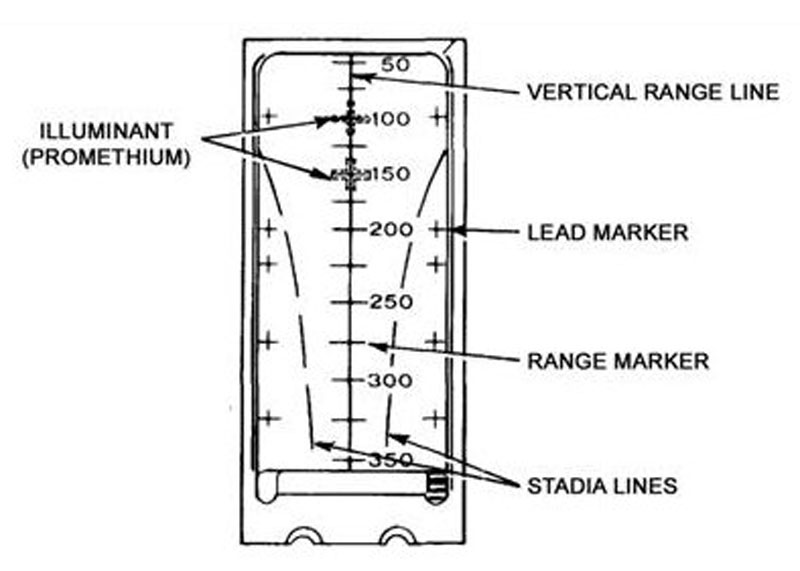 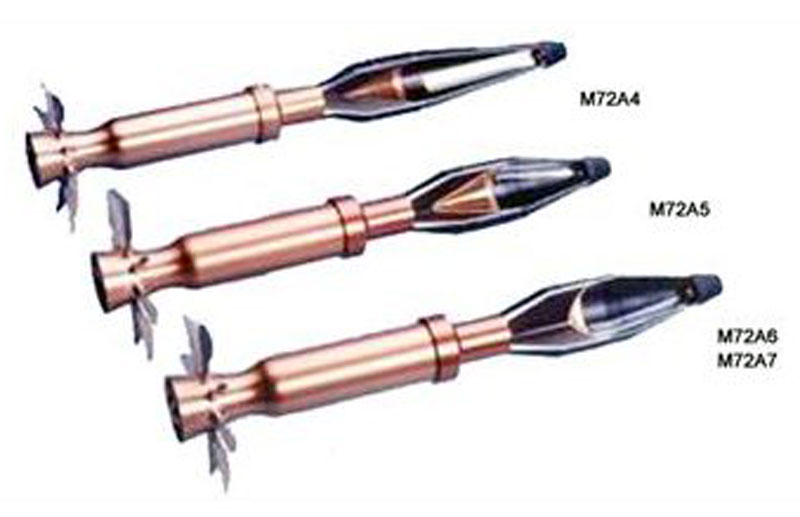 The M72 LAW started production in the early 1960s and carried on with improved versions into the 1990s.

The M72 LAW was the standard shoulder-fired anti-armor weapon for the United States military and its allies throughout the Cold War (though it still sees extended service today). The concept behind the weapon system was quit basic as it was essentially a two-piece launch tube with a ready-to-fire rocket within. The rocket was protected by the elements until the weapon was made ready to fire by extending the two launch tube sections to full length. At its core, the M72 was lightweight, cheap-to-produce and relatively easy to operate in an effort to provide the basic infantryman with anti-armor capabilities at range. Production of the M72 was handled by Talley Industries of the United States and has since seen license production granted in Norway and Turkey.

The major issue with early anti-armor weaponry was the required proximity to the target. It was not until World War 2 brought on the development of shoulder-fired ranged weapons to fulfill the purpose of knocking out enemy tanks that the category truly came into its own. The Americans developed their rather simplistic though reusable "Bazooka" launchers in 1942 which went on to see widespread use throughout the war. For the Germans, they utilized their Panzerschreck (based on the American Bazooka) and Panzerfaust systems - the latter consisting of a single-shot disposable tube with a ready-to-fire rocket within. The Bazooka itself was utilized well into the latter half of the 1950s and appeared in various forms before being retired.

After the Korea War (1950-1953), work began on a more modern solution while the concept (and battlefield requirement) remained the same. The resulting design became the M72 "LAW" Light Anti-armor Weapon and its designation said it all - it was a lightweight, shoulder-fired anti-armor weapon system designed to provide tank-killing prowess at distance at the squad level. The weapon made sense when considering the masses of Soviet tank armor that could be expected to cross over into Europe during the Third World War that never was. The M72 was essentially cast as a two-piece launch tube with one section sliding within the other, allowing for a rather convenient collapsing feature and improved portability. The weapon would be fully extended when ready for use and, within the weapon, lay a 66mm rocket-propelled warhead capable of defeating the armor of the day. The operator need only extend the launch tube, flip up the integrated sights and actuate the large trigger unit upon achieving line-of-sight contact with the target. The rocket would then emerge from the launch tube and see its spring-loaded fins extend - these utilized to stabilize the rocket during flight. The launch tube could then be discarded after use as it was not designed to be reusable. The M72 unit weighed in at 2.5 kilograms which meant that an operator could carry several into battle. The rocket's muzzle velocity reached 145 meters per second while her effective range was within 200 meters. The rocket's warhead was detonated via a pressure-actuated system which detonated the base assembly.

The 66mm rocket itself consisted of a rather simple warhead and body section. The warhead was capped by a blunt nose assembly which contacted the target. The charge was held in the aft portion of the nose section while the fuse was centrally located at the "neck" of the rocket. The body held the motor, igniter and spring-loaded fins. The basic standard-issue rocket type was the HEAT (High-Explosive Anti-Tank) round and was said to penetrate up to 200mm of armor. For training purposes, there was a specially-designed trainer round to be used. Sighting was accomplished through a front reticle and rear peep. Of note is that the M72 was a "rocket launcher" and not a "missile launcher" per se, so precise homing/directed guidance to the target ended the moment the rocket exited the launch tube - the stabilization fins managing the rocket in flight. User interaction ended the moment of launch and thusly the M72 rocket was prone to slight changes in its flight path when considering environmental factors.
Advertisements

Of course such a weapon system certainly help its inherent tactical limits. The operator needed to achieve a direct line-of-sight to the target before firing and this meant that he was exposed to the dangers of the battlefield when attempting to fire. Additionally, the weapon was not initially designed to be fired from confined spaces, limiting the strategic usefulness of the weapon in urban settings. As the launch tube was not reusable, a member would need to carry multiple M72s over the shoulders if multiple targets were to be expected. The rocket was also limited to effective ranges under 200 meters. Despite these limitations, the M72 was relatively cheap to mass produce and proved effective for the needs of the squad - it could be used to engage both armor and fortified concrete targets as needed.

The M72 saw first extensive combat actions in the Vietnam War where it was soon found to exhibit some operational issues. Preemptive detonation of the rocket after launch proved a major sticking point for these early-use batches. The experience forced a slight revision to the system that produced a more safe weapon and these were marked along their launch tube assemblies as such. The M72 continued use throughout the war and in the years following.

Over its operational life, the M72 went on to be evolved in several guises. The "M72" designation marked the original production models of 1963. The M72A1 sported a new, improved motor while the M72A2 was similar in most respects, given an improved motor facility. Safety was addressed in these previous models to produce the M72A3 standard. A high-velocity version with a new launch tube appeared as the M72A4. The M72A3s were then improved with a new launch tube to become the M72A5. A low-velocity variant with an improved warhead and launcher became the M72A6. The US Navy utilized this same version but knew it as the M72A7. The M72E5 was intended as a much-improved version in the 1983 evaluations that ended with the selection of the Swedish AT4 as the next portable US military anti-tank system. The M72E8 addressed the "firing from confined spaces" limitation with a new motor and launcher. The M72E9 brought with it improved anti-armor penetration capabilities along with a new launcher. The final M72 variant became the M72E10 model which featured a revised launcher and a High-Explosive Fragmentation (HE-FRAG) rocket warhead.

The M72 had run its expected service life by the end of the 1970s, directing the US military to find a suitable replacement. This was to be the FGR-17 "Viper" but the program was cancelled by the American government in 1983. Forced to choose an existing anti-armor solution instead of using millions to develop a new one, the US military settled on the effective Swedish AT4 which became the "M136" in US nomenclature. Despite the arrival of the AT4/M136, the M72 still continues in operational service today - having seen combat actions in both Afghanistan and Iraq. In fact, the USMC has recently (2011) contracted for 7,750 additional M72s of the latest production mark. The United States Navy SEALs still actively utilize the M72 in their current inventory as well, as does the US Army and Canadian Army. Many other forces retain the services of their M72 as a secondary system or have outright retired or sold off their inventories.

The Finns designated their M72s as "66 KES" while the Turkish military marks theirs as the "HAR". In the UK, the M72 takes on the designation of "L1". Overall, the M72 family has seen considerable exposure in a plethora of armies around the world. These include Australia, New Zealand, Norway, Philippines, South Korea, Spain, Taiwan, and Thailand to name a few.