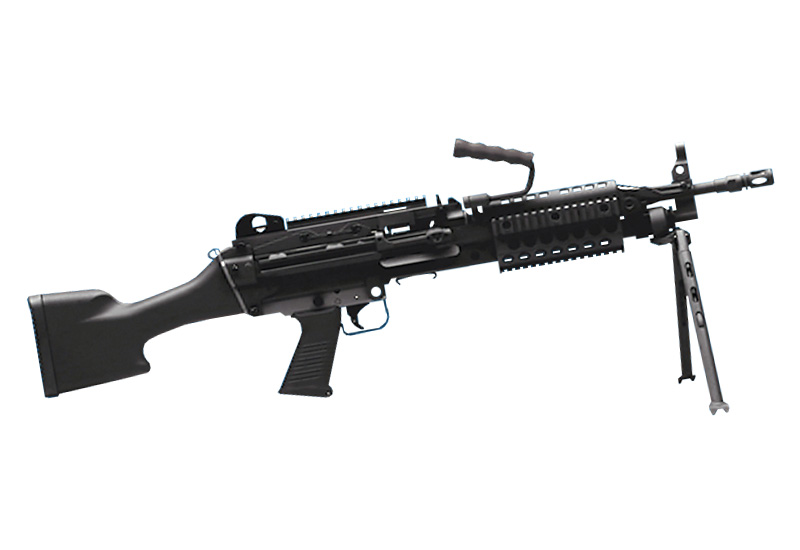 Authored By: Staff Writer | Last Edited: 05/22/2018 | Content ©www.MilitaryFactory.com | The following text is exclusive to this site.
In the early 2000s, USSOCOM (United States Special Operations COMmand) began a program to replace its long-running Mk 43 Mod 0 Light Machine Gun (LMG). The Mk 43 was a specialized, portable form of the Vietnam-era M60 General Purpose Machine Gun (GPMG) through the M60E4 variant, retaining the gas-operation and 7.62x51mm NATO belt-fed cartridge. The Mk 43 improved upon reliability of the M60 series and was given iron sights, a folding bipod and a forward vertical hand grip for additional support. However, reliability was never truly resolved and higher portability was required of a more modern system. This gave rise to the "Light Weight Machine Gun" program under the direction of United States Naval Special Warfare Command (US NSWC) and partnered through the Belgian concern of Fabrique Nationale which produced an off-shoot of the successful M249 SAW (Squad Automatic Weapon), itself based on the Fabrique Nationale Minimi family. The new product became the "Mk 46 Mod 0", a gas-operated automatic weapon feeding from the US M13 disintegrating belt and chambered for the 5.56x45mm NATO cartridge. Similarly, the dimensionally larger Mk 48 was developed concurrently for special forces use and chambered for the larger rifle-caliber 7.62x51mm NATO cartridge.

The Mk 46 was based specifically on the M249 SPW (Special Purpose Weapon) variant of the M249 line. The M249 SPW was given a shorter barrel and forend and lacked the standard carrying handle, vehicle mounts and magazine well of the original M249 offering which lightened the design to an extent and, thusly, made it more portable. Unlike the SPW with its collapsible stock, the Mk 46 was instead given the formed shoulder stock of the original M249 production model. MIL-STD 1913 rails (located at the sides and underside of the forend and along the top of the receiver) were added to broaden the tactical nature of the weapon and allow for various optics and accessories to be fitted as required. A bipod could be optionally fitted ahead of the forend/heat shield for additional frontal support required in the suppression fire role.

The M46 action relies on an open-bolt operation and features a changeable barrel assembly to prevent overheating and subsequent fracturing. The weapon is coated in a non-reflective black finish to protect the operator from glint while the bipod is of lightweight, though heavy-duty, titanium to content with the abuses of the modern battlefield. The receiver itself is of a formed steel frame construction while the barrel is of hammer-forged steel with a hard chrome-plated bore (as is the internal chamber). The buttstock is completed from lightweight polymers and ergonomically. An optional telescoping metal buttstock can be fitted that includes a hydraulic recoil buffer system and non-slip buttplate. The trigger guard is oversized for gloved hand operation. A carrying handle, affixed above the heat shield, is optional.

The Mk 46 provides the special warfighter with a compact, portable and adaptable high-volume automatic weapon system. Its belt-fed nature means that the Mk 46 operator can provide voluminous fire at range in both the direct contact and suppression fire roles, additionally accurized by way of available aimers and optics. The use of 5.56x45mm ammunition also makes for a logistically-friendly complement to the M4 Carbine and M16 assault rifles currently in widespread use by the US military and others. Additionally, the larger Mk 48 itself complements the Mk 46 when the larger rifle-caliber 7.62x51mm cartridge and its longer-range penetrative capabilities are required. The Mk 46 has gone on to become a proven performer under extreme circumstances across both open field and urban environments.

The Mk 46 sports an effective range of 800 meters against point targets with a maximum range of 1,800 meters against a target area. The system's overall length is 36.22 inches with an overall empty weight of 15.44lbs. Its listed cyclic rate-of-fire is 730 rounds-per-minute.

As of this writing, USSOCOM is the only recognized operator of the Mk 46 LWMG. The MK 46 Mod 1 is an updated version of the original Mk 46 Mod 0 model.

United States
(OPERATORS list includes past, present, and future operators when applicable)
✓ Fire Support
Capable of suppressing enemy elements at range through direct or in-direct fire. ✓ Special Forces
Qualities of this weapon have shown its value to Special Forces elements requiring a versatile, reliable solution for the rigors of special assignments.

Full-Automatic
Rounds are automatically ejected from the breech, a new cartridge stripped from the feed and set in the chamber, and rounds are continuously fired so long as the trigger is pulled and an ammunition supply exists. Open Bolt
System utilizes internal mechanism where bolt and associated working components are set to the rear of the receiver with no cartridge chambered; trigger actuation moves bolt forward, chambers cartridge, and fires bullet in single action - ultimately resetting during the complete cycle by way of the generated energy. Gas-Operated
Gas-operated system is featured, typically involving a gas cylinder and rear-driven piston directing energy to the bolt component. (Material presented above is for historical and entertainment value and should not be construed as usable for hardware restoration, maintenance, or general operation - always consult official manufacturer sources for such information)

*May not represent an exhuastive list; calibers are model-specific dependent, always consult official manufacturer sources.
**Graphics not to actual size; not all cartridges may be represented visually; graphics intended for general reference only.
Rate-of-Fire
730
rds/min
Muzzle Velocity
5,900 ft/sec
(1,798 m/sec)