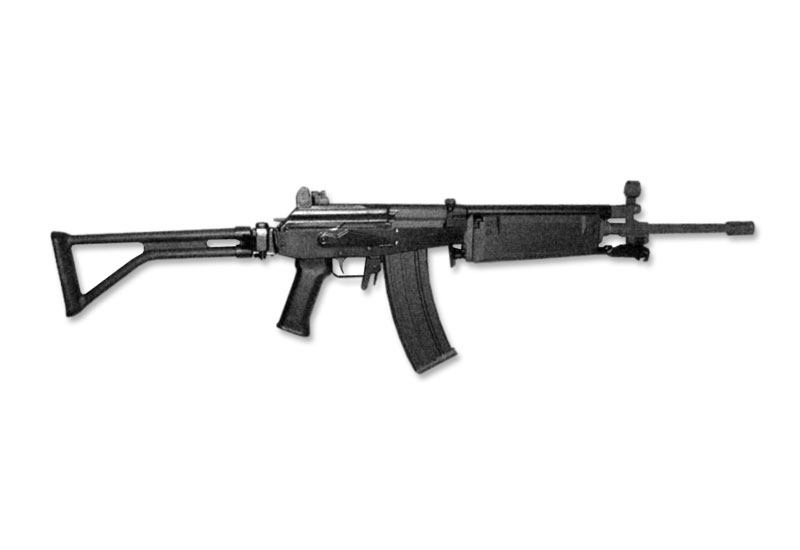 Right side view of the Denel R4 Assault Rifle in profile

Authored By: Staff Writer | Last Edited: 02/04/2019 | Content ©www.MilitaryFactory.com | The following text is exclusive to this site.
Long relying on foreign arms to stock its military inventory, the South African national army faced a dilemma of sorts when a UN arms embargo cut the nation off from outside support. The embargo began as a voluntary measure in 1963 and formed into a mandatory restriction by 1977. With no outside procurement of existing rifle stocks possible, the South Africa Defence Force (SADF) looked to within to find its next standard issue assault rifle.

After review of various potential assault rifle candidates, South African authorities settled on the Israeli Galil ARM, an assault rifle derived from the famous Soviet-era Kalashnikov AK-47 series. The Israeli weapon was developed in the late 1960s and entered production in 1972, ultimately being manufactured in a variety of forms including a carbine, sniper and designation marksman version. With its proven pedigree, the Galil ARM was a capable weapon in its own right, witness to countless battles between the Israeli Army and its various neighbors. The South African concern of Lyttleton Engineering Works (LIW) was granted a license for local production of the Galil ARM and this agreement was furthered in that engineers reworked various aspects of the Israeli design to suit South African military requirements. The South African designation for their Galil-based weapon became "R4" and adoption occurred in 1982. Lyttleton Engineering Works is now known under brand label of Denel Land Systems.

The new weapon retained its original 5.56x45mm NATO cartridge caliber and was still a gas-operated weapon with a rotating bolt function. The weapon fed from a 35-round curved detachable box magazine and was sighted out to 500 meters through use of a flip-up rear aperture sight and hooded front post. The receiver showcased many of the fine lines that made the AK-47 such an identifiable firearm with its charging handle, ejection port and fire selector switch all set to the right side of the receiver. The pistol grip was set in a conventional fashion and angled for some basic ergonomics. The magazine was inserted ahead of the trigger group and a magazine release catch was easily identified aft of the magazine. The handguard was fitted over the barrel and gas cylinder, the latter being installed over the barrel as in the AK-47. The barrel protruded a distance ahead and was capped by a slotted flash compensator which could also accept - and fire - rifle grenades as needed. The buttstock consisted of a tubular skeletal frame with a shoulder pad at its extreme end. The buttstock was as hinged at its base to fold over the right side of the receiver for a more compact overall form. The R4 weighed in at 9.5lbs and sported an overall length of 40 inches which could be contained down to 30 inched with the stock folded over. Optics proved optional in later production marks and three fire selector modes were available - safety, single-shot semi-automatic and full-automatic. Loops were also standard for the use of a shoulder sling when on the march. An integrated bipod - doubling as an ad hoc wire cutter - was standard and collapsed up against the handguard.

Despite its similarity to the original Israeli design, the SADF featured several notable changes. Among these was a lengthened and reinforced butt to counter the battlefield abuses encountered in "bush country". The sights were also reinforced (as was the bipod) and the gas system improved. The original butt construction was of aluminum and nylon while later models instituted a glass-nylon process after some operational service was had. The original magazines were of metal and this was later changed to a lighter glass-fiber nylon design within time.

The R4 Assault Rifle went on to see considerable combat service in various localized and regional conflicts. The type saw service in the South African Border War (1966-1989) and the Namibian War of Independence (1966-1988) as well as the Rwandan Civil War (1990-1993). The type was also used in Haiti by national police forces. Operators have gone on to include South Africa, Haiti, Rwanda and Serbia in all.

The R4 was further developed into a carbine version known as the "R5" - essentially the Galil SAR with South African changes. This version incorporated a shorter gas cylinder, barrel and handguard for a more portable fit in the hands of commando, airborne and vehicle crew type elements - elements requiring the facilities of a compact weapon. The R5 lost its bipod for obvious reasons and a semi-automatic-only version for the civilian market was showcased as the "LM5".

A further development of the R5 became the subcompact "R6"which brought about an ever shorter barrel and handguard design. This version was also intended for those "space-conscious" battlefield elements and, as in the R5, a semi-automatic-only version of the R6 for the civilian market was developed as the "LM6".

The internal working components, caliber and gas-based firing action of the R5 and R6 are directly copied from the R4. The semi-automatic-only version of the R4 is the "LM4".